Not All Journeys are Smooth Sailing 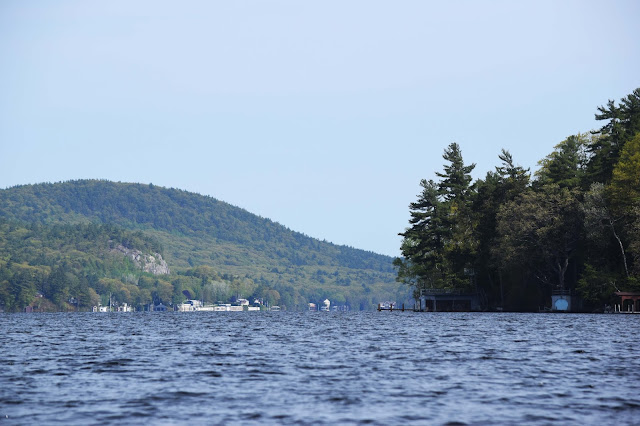 Today I have a little story for you.
This Saturday morning was gorgeous. Not quite as warm as summer, but warm and sunny. When we got up we decided we would put the boat into a local lake and take our shakedown cruise.
We were on the water just after 8 AM and enjoying the view. 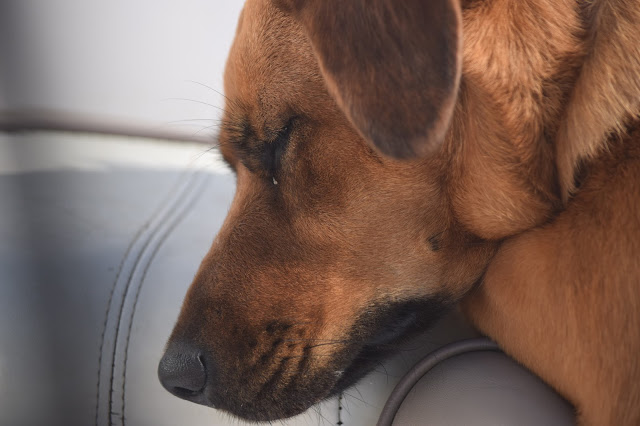 It was so nice even Maddie fell asleep.
Lake Winnipesaukee is the largest lake in our state and the second largest in the 6 state New England area. We live about 10-15 minutes away from the southern end of the lake which is an area known as Alton Bay.
That's where we put in our boat. The bay is a long finger that you have to traverse before you get into the main body of the large.Since it is a glacier carved lake, that makes sense that there's a long finger like bay. 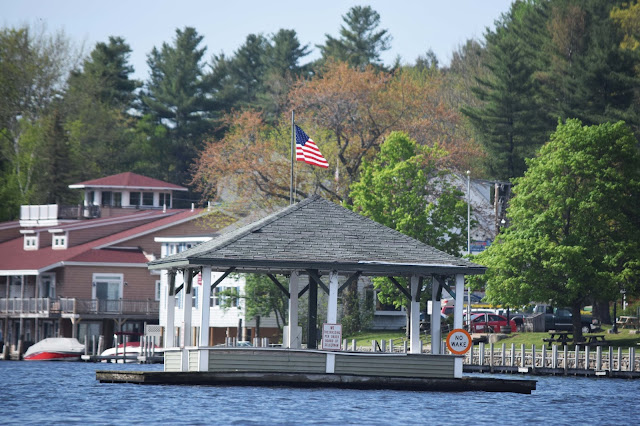 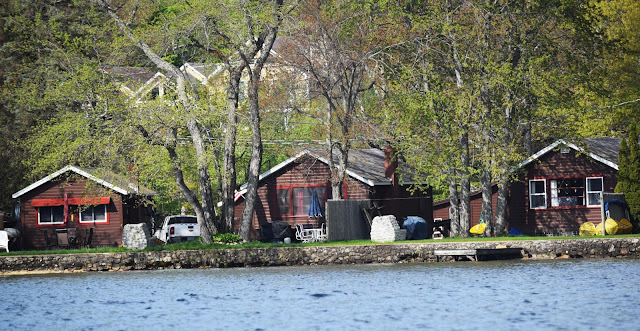 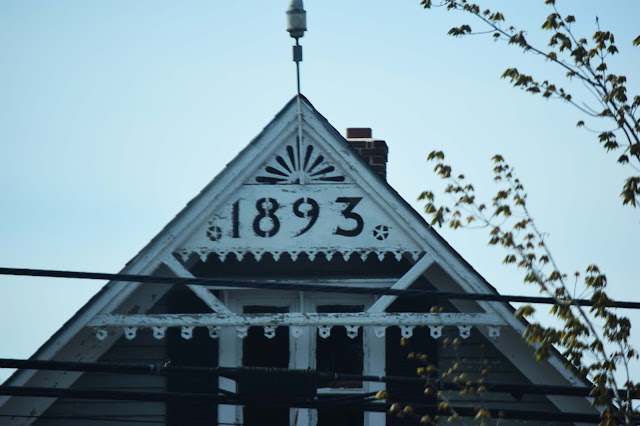 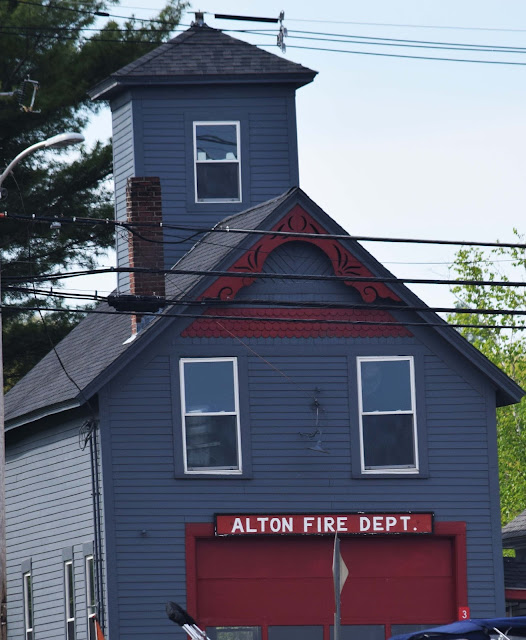 As we made our way down the finger like bay we realized the floor was getting wet. Thanks to my daughter who first noticed that.  So my husband opened the engine cover and notice the motor was spraying in all that water. So we turned around and headed back in, with the boat getting more and more water in it. We keep stopping, letting the bilge pump push out some water, but the water was coming in faster than we could pump it out. Finally my daughter started rowing. She worried we were going to sink. I don't think we were at that point yet, but she was a little nervous. We told her she could paddle. So she starts paddling which didn't really move us any more than the water movement did anyow, but it kept her busy for a few minutes. It also caught the attention of some other boaters who came over gave us a little tow into the state boat ramp where we launched. 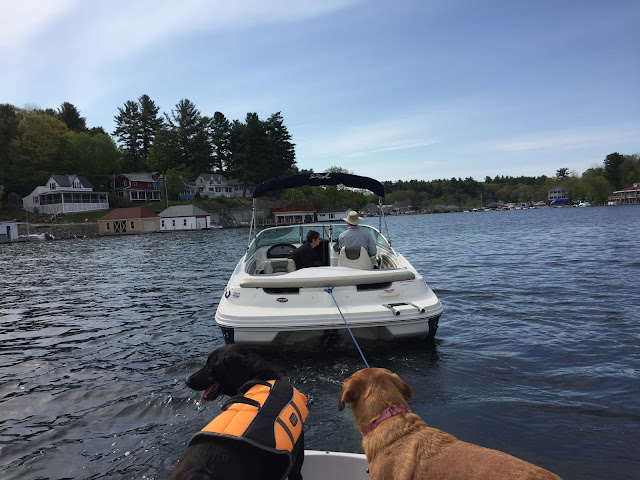 The dogs were fascinated by us being towed.
Nor were they very nervous about the water.
So much for our boating morning. 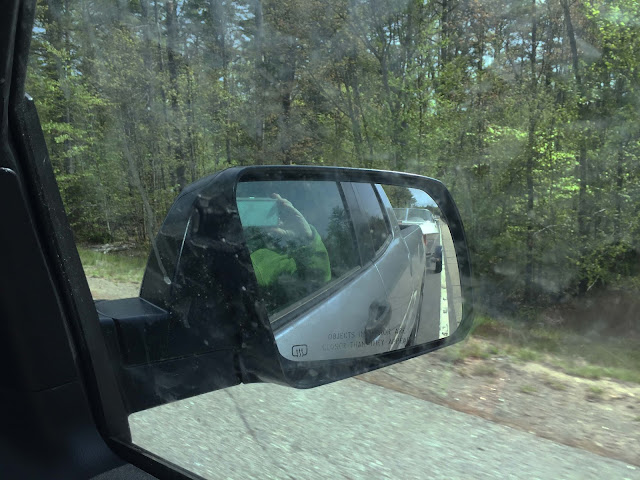 We took the boat to 2 marinas  trying to find the part that broke on the motor. The hubby got his info, and then we brought the boat home. Once the hubby gets that part checked, we'll find out if it has to go into for some work or not.
Now we were home and done with the boat by noon, so it was a very short boating day.
Sad face for me.
Then I got to spend my afternoon running errands. Wahoo!
Hope everyone else had a less adventurous day than us.

glad you got towed, whew!

WOW great to hear you had a happy ending to that boat trip and it wasn't more serious. I would have been nervous for sure!
Great pics Erika of your very cool neck of the woods.
Happy Sunday.
oxo

Oh my, that was an exciting trip, I think I would have been scared, too. Good that you kept calm, and how nice of people to tow you back in. Wonderful photos, thanks for sharing, and hope you soon have it repaired. Hugs, Valerie

I PROMISE the only thing I am laughing about is your daughter rowing and the photos of the dogs. The rest is a sad and scary tale. I feel bad that your first outing this spring turned into something just short of disaster. And I'm always impressed that there are so many good people in the world who are willing to help and come to a person's aid.

I hope your weekend was better than mine. I watched it hail and waited for tornado warnings that thankfully missed us.

The best laid plans.... I'm sorry about your boat and hope it's fixed soon. Sometimes it's best to avoid excitement ;)

Great photos Erika, the Fire Departments building is so pretty. Great info about the lake and I'm glad to hear that there were some kind people that could help you to the shore and that you're all well. Next time you'll have a better trip.

Boating mishaps are the worst, it's always a bummer. Hope it's an easy fix and not the money pit. xox

Blessings......
Glad it all worked out.
What's most important is that you are alright.

thanks for sharing the photos, they are great.

Always an adventure with those boats ---lol!
Hope the problem can be fixed easily!