Hi there ladies. It is another T Day again.  Time to share a drink related post over at Bleubeard and Elizabeth's blog.
And if you have never been by, we'd love to have to join us for T.
So I'm going to take you with me on my first visit to one of the Red Arrow diners.
The day before Thanksgiving I was off from work, and since my hubby had one of his monthly post-kidney transplant doctor's appointments, I went along for the ride. The hubby did not have the day off  so that afternoon (after his appointment) I dropped him off at work  and I went shopping for a couple of hours until it was time to go pick him up.
As it was then dinnertime, he suggested we go to the Red Arrow Diner for dinner.
The original Red Arrow Diner is in Manchester, New Hampshire and has been in business since 1922. It is a popular spot for presidential candidates to stop by during primary season. However we weren't in Manchester but were in Concord, New Hampshire where he works. The Red Arrow Diner had recently opened a restaurant near his office, serving the same menu as the original Manchester diner. 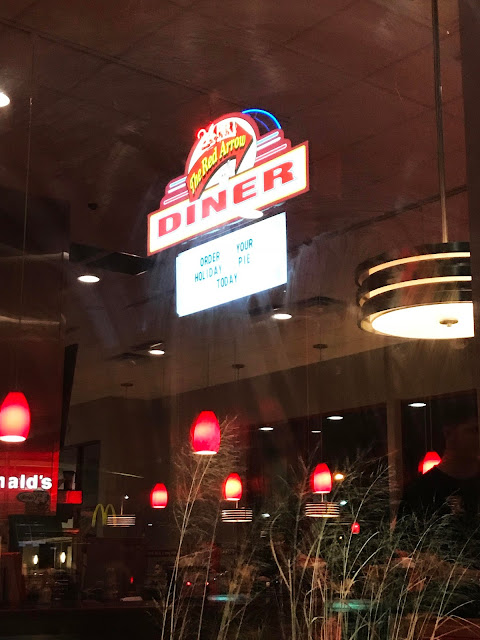 We arrived at a perfect time because there was no wait for a table.  Yet within 15 minutes of our arrival there was a long waiting line. This top photo is looking out the window from our booth. 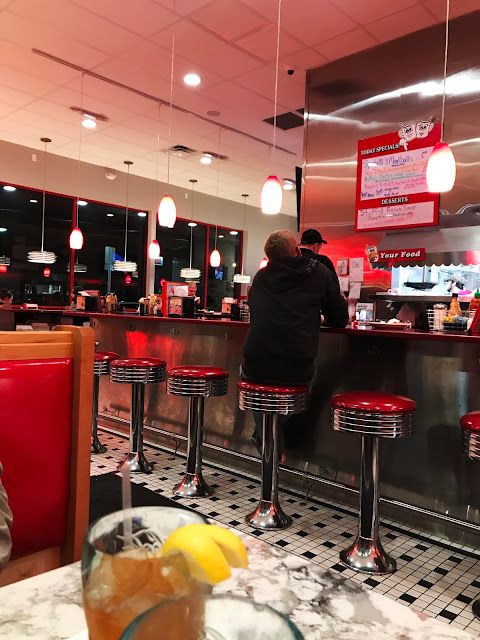 Although this restaurant doesn't have the worn charm I image the original diner has, I still like the  look of it. 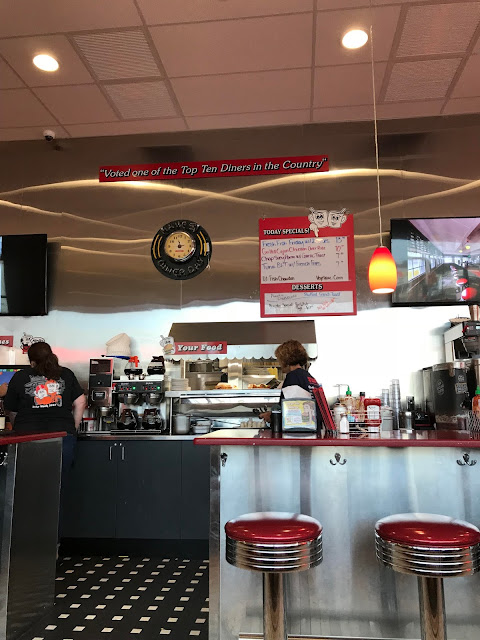 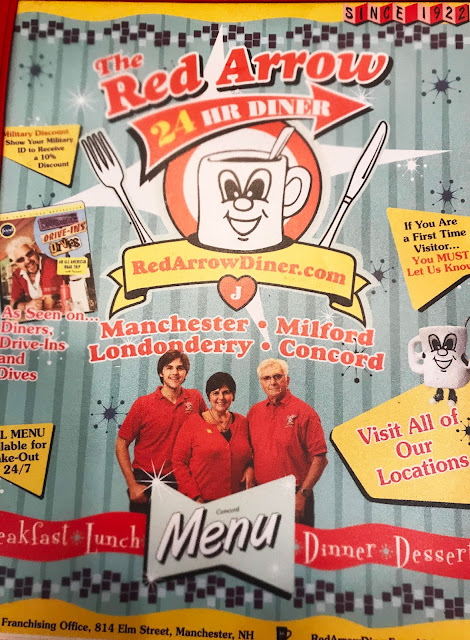 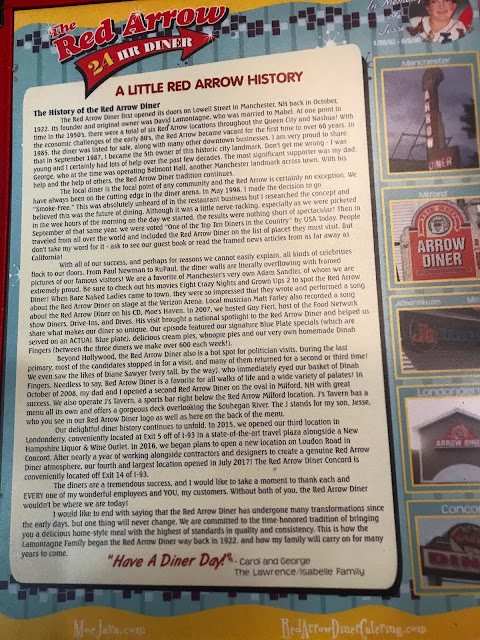 The menu was huge. It had breakfast items, sandwiches and lots of comfort foods. 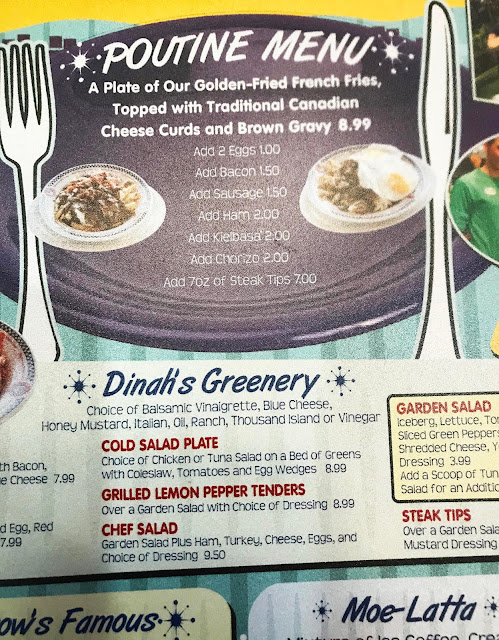 Since New Hampshire is a state just south of the Canadian Province of Quebec, we have a large French Canadian population. I looked it up online and found out that almost 1/4 of residents in my state have French Canadian ancestry. At one time Manchester was a successful mill city that attracted many people to move south over the border for jobs.
So I wasn't really surprised to see poutine on the menu. It's a classic French Canadian dish.
I thought about getting poutine with an egg, but I went for breakfast instead (even if it was dinner time). 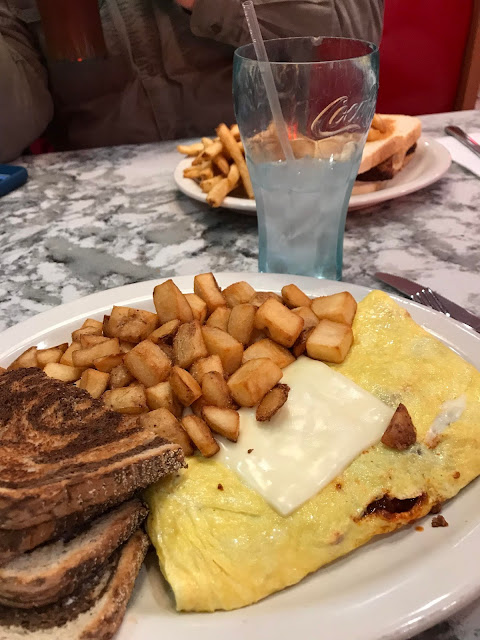 I had a chili cheese omelet, some home fries and toast.  My drink was water.
I'd love this same thing for supper tonight. :) I should probably wait and post photos like this after I've had my dinner.
Have a great T day everyone.

Email ThisBlogThis!Share to TwitterShare to FacebookShare to Pinterest
Labels: T stands for Tuesday

I love that classic diner look so much!! The food looks amazing as well.
Happy T day!

The diner looks like a fun place. Bet they serve a great burger, too, but I love places where you can get breakfast all day long. Happy T Day

Looks a fab place to visit, and the sight of your food has made me hungry, it's early morning here and I haven't had breakfast yet! Happy T Day, hugs, Valerie

here it is one hour until lunch and you made me hungry like a bear!;)
happy t-day!

Ouh Yummy. I adore the food posts, so thanks for yours and also for this T day challenge idea!

I think I remember seeing that restaurant in Manchester when I saw Obama on the campaign trail in 2007. This one is even more warm and welcoming, I think. Your meal looks wonderful and I wonder if that is marbled rye bread you had with your omelet. It looks really good, and has made me hungry, too.

Thanks for taking us to the Red Arrow Diner and sharing your nightime breakfast and water with us for T this Tuesday.

Middle of the afternoon here and I have had my lunch, but could still fancy trying some of that delicious food.
It looks a super eating diner.
Happy T day wishes.
Yvonne xx

The diner looks amazing, such a classic look and feel - I love it! The menu was such an interesting read too and your breakfast looks yummy, is that cinnamon toast I spy on your plate - yum! 😁. Wishing you a very Happy T Day! J 😊

Oh wow... that looks and sounds yummie and I like the restaurant's interior as well. This reminds me of vintage and Coca Cola ---it's typical U.S. for me - super!
Happy T-Day Erika!
oxo Susi

Oh yum, I love breakfast for dinner! Thanks for showing us this cute diner. I like its retro vibe.

Googling to see where the closest one to me is.... well, bummer. They need to branch out. ;)

This is a very cool looking diner-and you got there just in time too-perfect no waiting.
I love breakfast food any time of day lol Happy Tuesday Kathy

i would totally eat at this diner! looks yummy. so glad you got your stickers, have fun with them! have a wonderful week. xo

What a fun step back in time to a 50s style diner, Erika. Your omelette has my mouth watering.

That looks like a really typical American diner. Your omelette looks delish and I would choose thsat too as I like chilli things.
I took time to read the history. Very interesting.
Happy belated T-Day,
Lisca

This looks so yummy!

Oh, I love an old fashioned diner! Maybe if I ever get to NH, we can meet up there!