Hi everyone. Happy new week. I hope everyone had a nice weekend.

One of the things it's been time to do lately is to keep track of the changed in nature that signal the arrival of spring. It's something I've always been a geek about and record every year. It's nice to have a record since spring here in New Hampshire can start any time between mid-March to even in bad years late April.

When do I see the first robin? (Wednesday, March 24)
When does the snow finish melting in the yard? (Monday March 29)
When do my crocuses bloom? (Not yet but close)
When does my phoebe, a type of fly catcher bird, reappear under the eaves of my husband workshop? (Sunday April 4)
When do we hear the first spring peepers, a type of tree frog? (Not yet.)

It's exciting after a long quiet winter. (Does this sound like my life needs more excitement? Ha-ha!)

Here's the tiny bit of snow left in my backyard last Monday (March 29) in the morning. 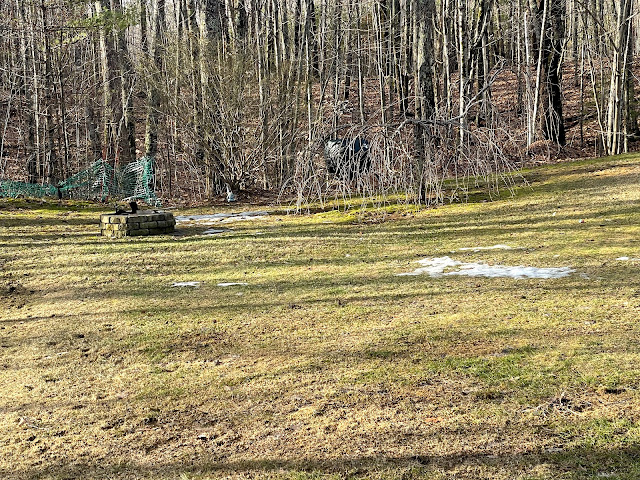 And by the afternoon, we were snow free! Happy dance time! 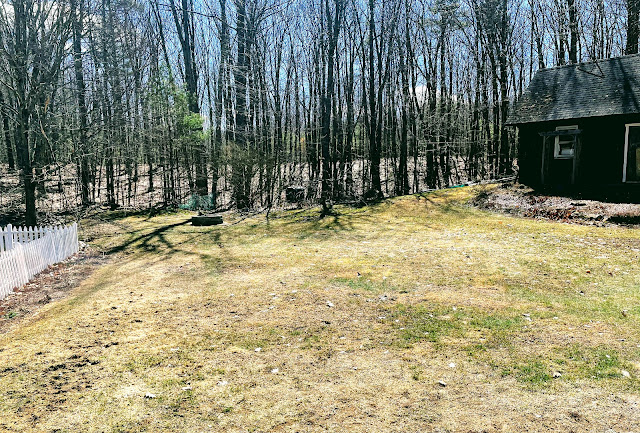 A week ago on Sunday (March 28th), my husband and I took a drive to Lake Winnepeesaukee, the big lake near us. This was the ice situation in Alton Bay that rainy morning. 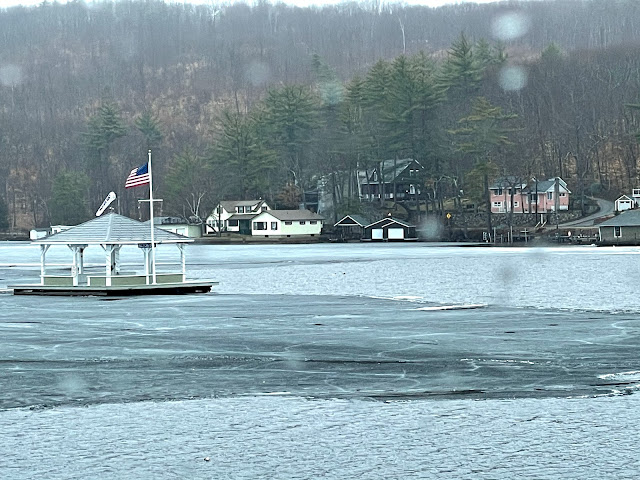 And here it is just 5 days later this past Friday morning (April 2) after I went grocery shopping. 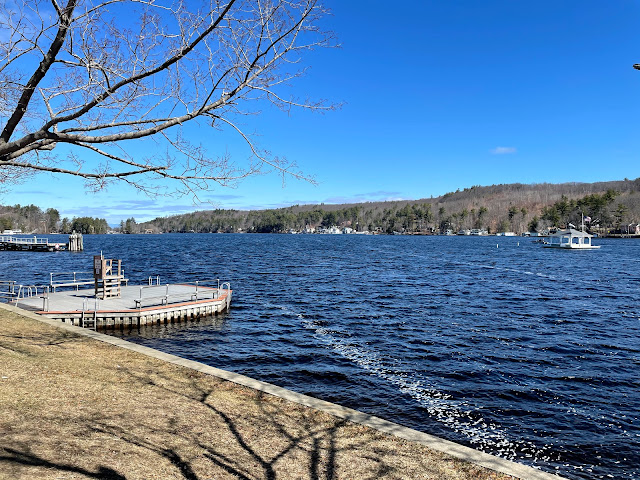 I even went for a drive further up the bay to the overlook along the road to see if the end of the bay was still iced over. 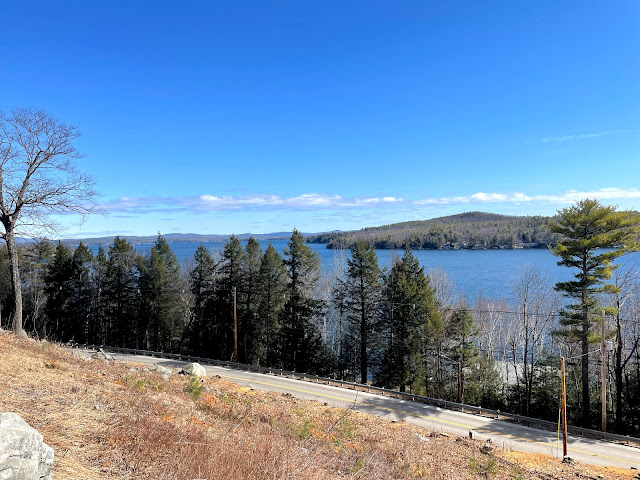 That was open too. Looks like the lake is open as far as the eye can see here. (And the state cut down some trees that were blocking the view. Nice.)
This past Saturday afternoon my husband and I took a drive around the entire lake to check out the ice situation. We've been waiting for them to call ice out.
It takes almost a couple of hours with not a lot of traffic to make the drive, and even though the south end of the lake is open, on the north end there was still some ice. 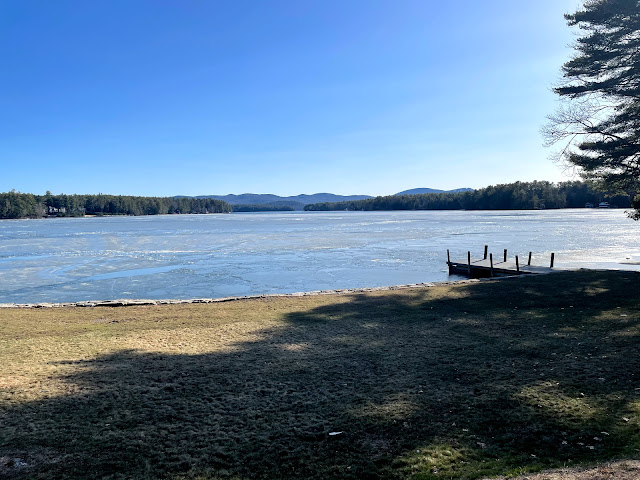 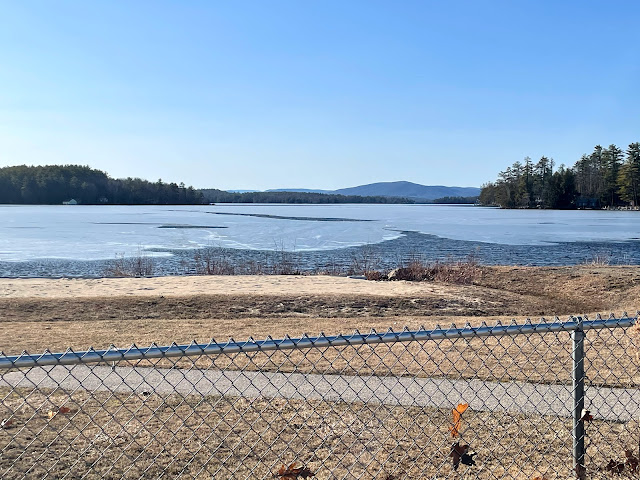 When this ship in the photo below, The Mount Washington, can leave its port, ice out is called. As of Saturday late afternoon when we stopped by, the end of the harbor where it opens up into the big lake still had ice. 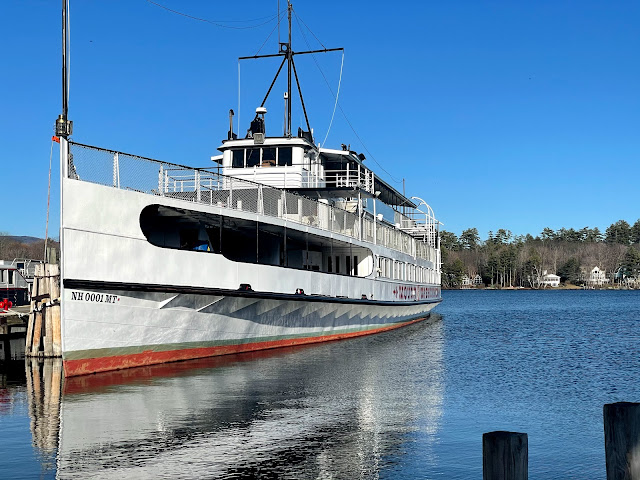 It won't be long until ice out is official. Maybe even by the time you read this post.
I have been taking in the bird feeders at night for a couple of weeks now. It is a pain in the you know where, but better safe than losing them when a bear drags them off into the woods or rips them apart. My daughter's beau snapped this photo this past Friday morning looking outside their house window. 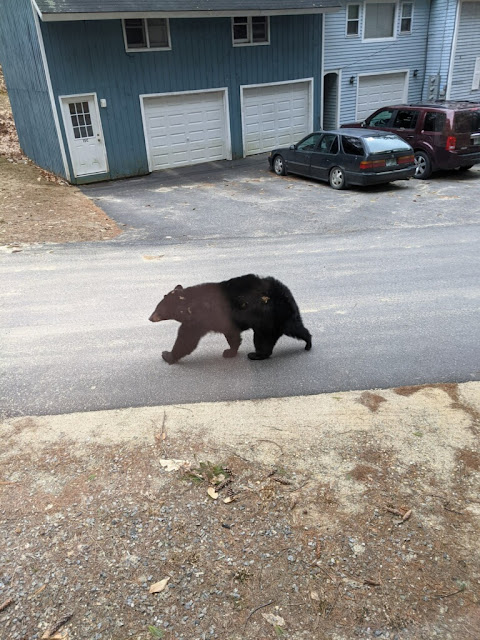 Bears wake up especially hungry so I bet this guy was out hitting some bird feeders.
This next guy is hungry too. Or in this case, hoping I get my  bird feeders put back out for the day, filled with sunflower seeds, ASAP. 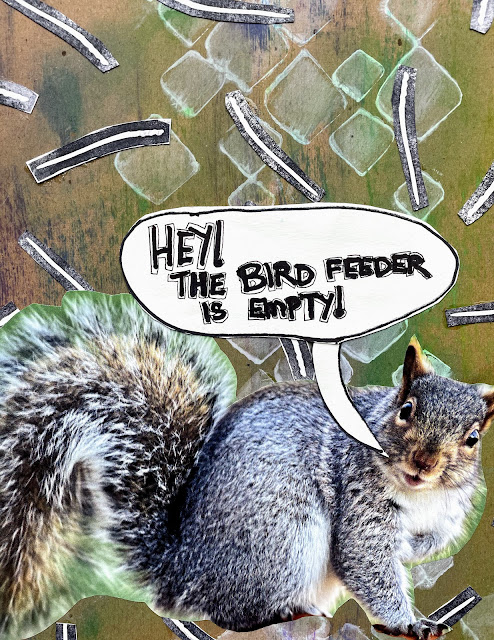 My page is inspired by all these spring changes and this squirrel photo.  It's my latest for Eileen's Inspired By challenge at Art Journal Journey.
My background started with a piece of cardboard from a package that I received in the mail. I stenciled the relaxed diamonds with some white paint. Then I rubbed the green  and blue inks on the page. I had some left over bits of soft rubber from when I carved my seaweed stamp (last Friday's post) so I carved the buttonhole looking image. These were stamped on white paper, fussy cut and then randomly glued around the background.
Mr. Squirrel is a photo from an old New Hampshire Fish and Game magazine that I was getting rid of, and I made the quote bubble.
Have a great start to your week. Hope you have lots of signs of spring around you (if you live in the northern hemisphere that is).
And as always, thanks for stopping by to visit.

What a fabulous post and so many signs of spring to look for - such fun! It looks like spring must be on its way, the lake looks so beautiful with the deep blue of the water shining in the sunshine 😀. Wow, that bear is too close for comfort! Wishing you. Happy Easter weekend! Hugs, Jo x

I loved your post-and never would have thought to write up a spring journal-nice to look back on. Spring is really an awesome season. bears are awake now for sure. I loved your page too-

What a remarkable way to count off certain signs of spring. I see that some of these have already occurred and some you are still waiting on. I saw a cardinal yesterday for the first time in about four years. He was bright and beautiful and I was tickled, since it had been so long since I'd seen one. I'd rather see a bird than a bear, but it seems you have plenty of them in your area. Lovely photos of the lake and your home, too.

Had to laugh at the squirrel. He DID look ready to be fed. Very clever take on Art Journal Journey's take on Inspired By that you and Chris are hosting this month. LOVE how you used the rubber off-cuts, too.

I enjoyed your signs of Spring list. I was watching NECN this morning and ice out still hasn't been called. The news said maybe by tomorrow. I love the bear just calmly walking down the street and your page is a wonderful reminder to fill the feeders. Enjoy the day!

We have enough trouble with squirrels. Residential bears sounds a bit scary! We don't get y'all's lovely scenic snow scenes, but Spring comes earlier here and we have robins year 'round, so there's a trade-off anywhere I guess. I love your lake shore scenes.

The bear looks young but I am glad your daughter's beau was inside looking out. I wonder how many garbage cans were looted of their goods. You have some lovely photos of your adventure to this lake and noticing how fast the ice melts. It is nice now when we see glimmers of spring. We have a forsysthia (spelling??) which is a nice bright yellow. Your squirrel page is great and love the quote.

Love your fun journal page, great idea. And it's fun to be able to observe the seasonal changes in nature. Lovely photos and great shot of the bear! Have a great week, hugs, Valerie

Oh no! A Bear taking it´s morning walk around! I would be terrified. :O
Here in south Finland is still snow. Some places like streets and fields it has smelt, but etc in our garden there is still quite much.
I enjoyed your pictures :)

Wonderful photos of the bay/lake. The water color is so pretty. Oh dear!...a hungry bear strolling along in hopes of some easy breakfast. Love your funny squirrel journal page. But it’s so true. The squirrels are fun to watch when they’re trying to steal from the birds.

Absolutely love the cheeky little squirrel...better than a bear!!!
Love how you count your signs of Spring! The lake looks great and certainly looked like a quick thaw. We have seen an example day of how quickly things can change! Hugs, Chrisx

LOVE the squirrel! So fun. What a cool bear picture too. Where you live is so amazing. I loved seeing the lake pictures and reading about ice out. Wow. So cool! Hugz