T Stands for Apples, Iced Tea and the Deck Project

Hi everyone. Happy new week. Since it is time for T day again, happy T day to all you ladies who of the T gang.

Today's post is a mish-mash of this and that going on for me in the past week. I've also included a drink related  photo for T later in this post. This is my entry this week for T over at Bleubeard's and Elizabeth's blog.

The big project at my house is the deck my husband is replacing. The footings are still good, but the floor boards were starting to pop up and curl. The railing tops were also looking a little worse for wear, so my husband got the bug to replace the deck. I've learned that it is better to let the man do what he wants to do because at least then he is more motivated to finish the project quickly.

Of course with him being an engineer means that everything gets done with some designing and that slows the process a bit (smile), so right now my deck is in the under construction phase. Here's a couple of photos from this weekend's work. 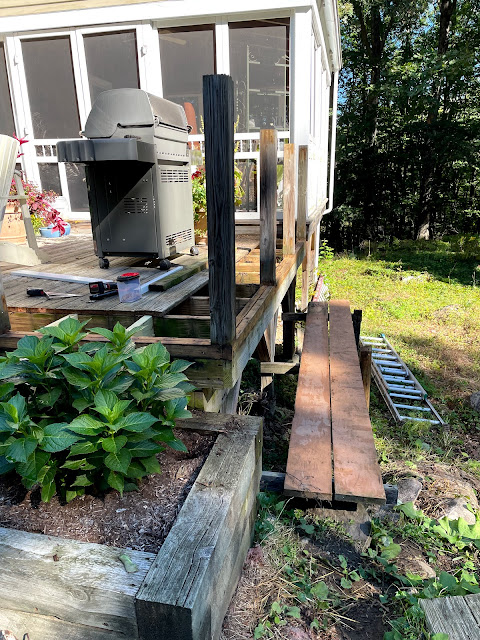 He had to build some scaffolding just to get him a few inches off the ground to work on that side of the deck easier. He also had to put in some short support boards along the edges. That's because on our old deck the decking goes straight across from edge to edge, but this time he wants more detail and is putting a picture frame around it. By that I mean there will be a border of wood running around the edge of the deck planks. 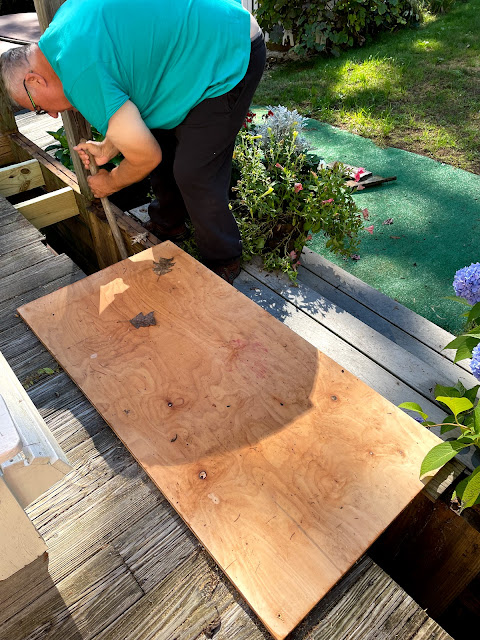 Right now there is a big gap, but he put in a solid piece of plywood so we can get on off the deck. Some of you might remember me mentioning in a recent post that this is our most used entrance in and out of the house.

The hubby tells me the project will move faster once he gets all the pre-work done and when he starts laying the decking down.

Most days our weather has been wonderful this past  week. With a few exceptions. 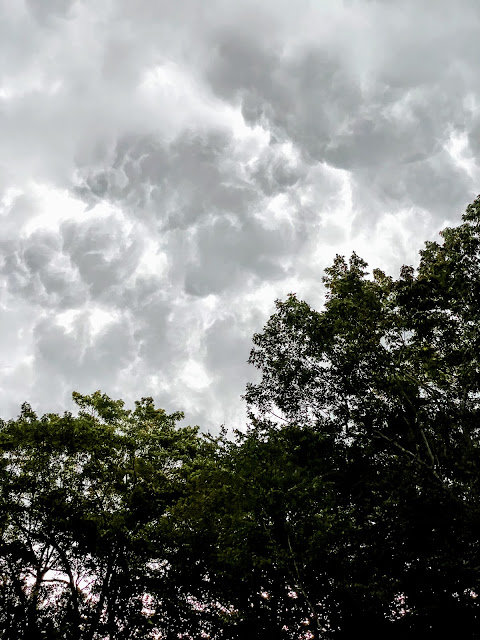 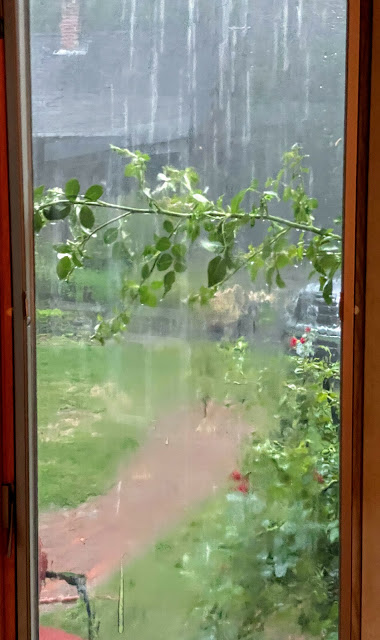 I love days in the 70's (21-26 degrees C), which much of the past week's days have been. There is just a tinge of color starting in the trees. 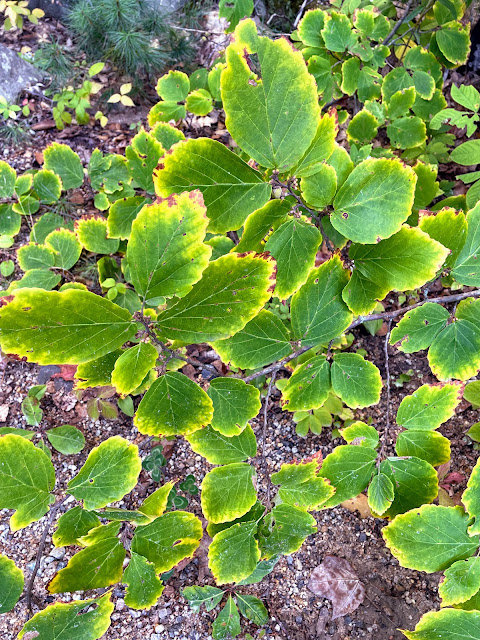 And there's still lots of mushrooms. 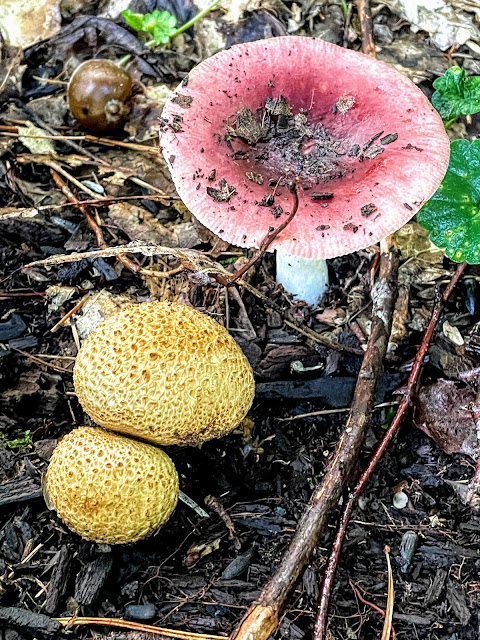 I went out apple picking one day. 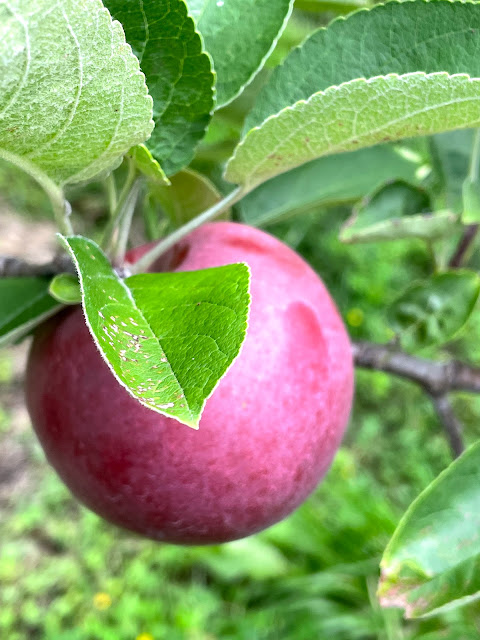 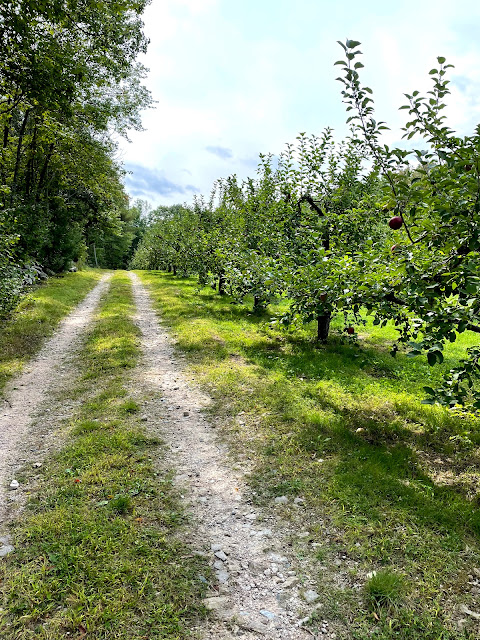 The crop is great this year. I made an apple crisp, and I really have the bug to make a cheddar crust apple pie, which has been on my baking bucket list for a few years now. Maybe this week I'll do that.
My ticket for T  this week is this photo from when I met my husband for lunch one day. I had to go to Portsmouth for my allergy shot and allergist appointment, and since he works in the city, it worked out that we could meet. 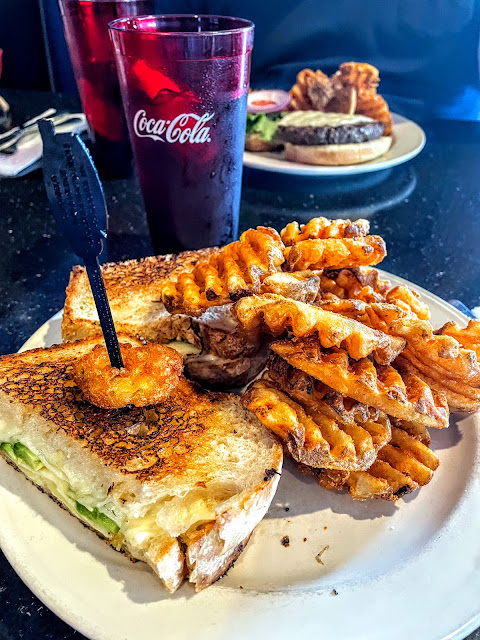 I had a grilled cheese with avocado and fries. It was so big I ate half for lunch and brought the other half home for dinner. My drink was some unsweetened ice tea. You can see he had a burger and unsweetened ice tea as well.
That's it for me. Hope everyone has a great new week. And a happy T day too.
Thanks for visiting.

Good to hear that the apple crop is good in your area this year. Your apple dishes sound very good. The midwest had early warm weather and then freezes that harmed the apple trees, so it's not so good here. We have some apples, but limited supplies.

Your meal looks delicious! I look forward to seeing that cheddar apple pie. Sounds like an interesting combination but must be delicious as apples and cheese are yummy separate. We used to go apple picking every fall when we lived in NY. Sadly, there is no place around us within a few hours that allows for picking your own.
My hubby is the same way and also an engineer. It may take longer but it certainly gets done right and with precision.
Happy Tea Day,
Kate

I had to laugh at your husband. I've been known to over-engineer a project myself.

You are so lucky your weather is so good. That is our NIGHTTIME LOWS. We are still in the 90s here during the day. I'll be so glad when it cools a bit.

Great that you went apple picking. I look forward to the next apple pie that you can tick off your bucket list. If it stays cool, or rains, it would be the perfect time for pie baking.

OMGoodness. I have cheese. I have an avocado. I have butter. I need to make that grilled cheese sandwich you had. It sounds wonderful. Looks good, too. Thanks for sharing your deck project, your apple picking, and your meal and tea with us for T this almost Tuesday, dear Erika.

Yupp, my Hubby is the same ;-)
Wonderful weather you had and your food looks soooo yummy!
Have a great T-Day!

Glad the deck project is coming along, and I'm sure it will be great when it's finished. And Apple pie with a cheddar crust, yummy! I want some, too! The apples look great! Your meal in town looks great, I like it when there's enough to take home for a meal the next day! Happy T Day, hugs, Valerie

Your food looks delicious, I haven’t had a toasted sandwich for years even though we actually have a sandwich toaster, never been used!
The pie sounds tasty so I’d be interested how it turns out when you make it.
The decking will look lovely, my husband likes to prepare but always likes me on hand to pass him items, sometimes that annoys me as I end up standing around, I’m not very patient so I’d rather be the one doing the work. LOL
Happy T Day
Jan

So nice to get things done around the house, my hubby puts a lot of thought into projects too ...lol 😉. It's starting to look like autumn here too with the leaves just beginning to turn. I hope your allergy appointment went well and I'm loving your meal, so yummy! Wishing you a Happy T Day! Hugs Jo x

At least with an engineer, you know it will get done right! Love the rain out the window photo, those mushrooms and a grilled cheese sounds great right now!

Decks are a lot of work, but y'all look like you have it well in hand. That food looks delicious. I haven't had lunch out in so long I've forgotten what it's like lol

Hi Erika, your lunch looks so delicious! We need new boards on our deck too-Larry has been power washing the peeling paint off to see how bad it all is. Isn't it wonderful when our husbands can build things? I love that.
we finally got rain storms last night after a 90 degree day yesterday. today it feels like fall for sure-cool and windy. Happy T wishes Kathy

It's good that he's handy and knows what to do. I'm sure the deck will look beautiful when it's finished. Hopefully, before the snow flies! I'd rather have warmer temps, but apple picking is always fun as well as the baking of the apple goodies. Nice that you could meet your hubby for lunch. I like his choice better. Happy T Day

I'm sure the deck will look good when it's all finished.

It's that time of year for apples isn't it :)

So handy to have a talented hubby who can replace the deck and make it better in the process! Loved seeing the pictures of him at work. Great looking food too, Erika. Yummmmmm! Fun apple ideas too - I want to make a cheddar crust pie too - thanks for the idea! Happy late T-day! Hugz

Your husband sounds like my husband, there is always a lot of designing, planning and prep work included in these big projects. But to be honest, the results have always been great, so I am not complaining. - A cheddar crust apple pie? That sounds interesting. let us know how it is when you will have done it.

Hurray for your hubby! Yes, you are right to let him work at what he wants to work at. I'm sure the (over?) engineered project will turn out beautifully.
Apple time! We have planted several apple trees, so I hope we will be having apples coming out of our earholes in years to come.
Did you see my blog about Alhambra? I didn't really write much about it, but you can go online and learn all about it. It is fascinating as well as beautiful.
I'm sorry to be late again, but as I've mentioned before, we are not home on a Tuesday and I can't get to my computer.
Happy belated T-Day,
Hugs,
Lisca

A few years ago I decided that my handyman days were over, exactly when I faced the prospect of rebuilding the deck. I was happy to pay a couple of local guys to do it, and I must say they did a really good job. They needed a few bucks too, having both lost their jobs, one to layoffs, the other when the company moved overseas.

We used to apple picking with our kids when they were small, and peach picking, and blueberry picking too. Miss those days. It week!

I was enjoying those 20-26C days too right up until last week, and now we have nothing but rain rain rain and 10 degrees cooler :( I love those mushrooms, they look amazing. Are they edible or poisonous? I hope your husband finishes the deck soon, I can appreciate all the pre-work but I am always in a hurry to get things finished lol Happy T Day! Elle/EOTC xx