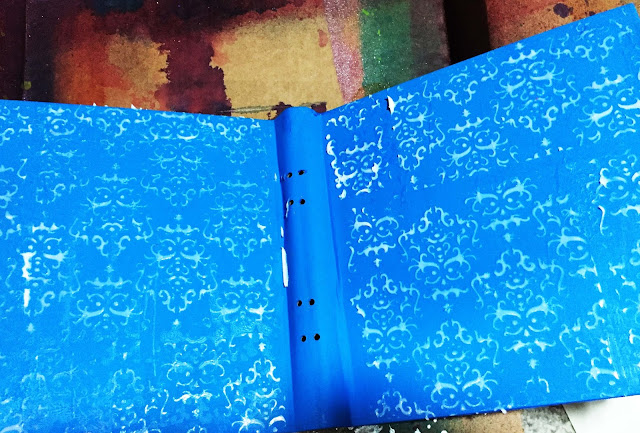 So I've been putting  a travel journal together. Its really in the early stages.
I had this blank cover which I painted and then used a stencil and clear molding paste.  After that dried I added a wash of watered down gold paint over the blue. Then I drilled some holes, but I  realized they weren't going to work. So I taped up the binding edge with some of that aluminum tape you buy at hardware stores. 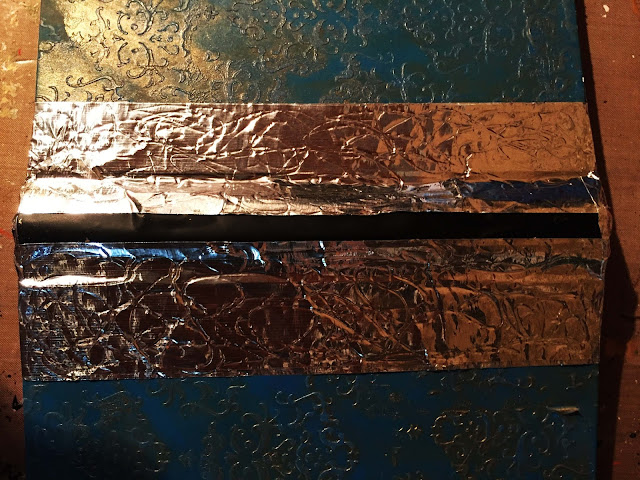 I then painted the tape (you can't see that here)  and used the end of a paintbrush to give it some wrinkly texture.
I had some left over pages from a couple of travel journals I've made in past years so I decided I would use them up. The are made of heavy book board like cardboard. So I painted them to give them some background color. I am going to make this a ring binder (like a 3 ring binder) and so I can move pages around when I actual use the journal. 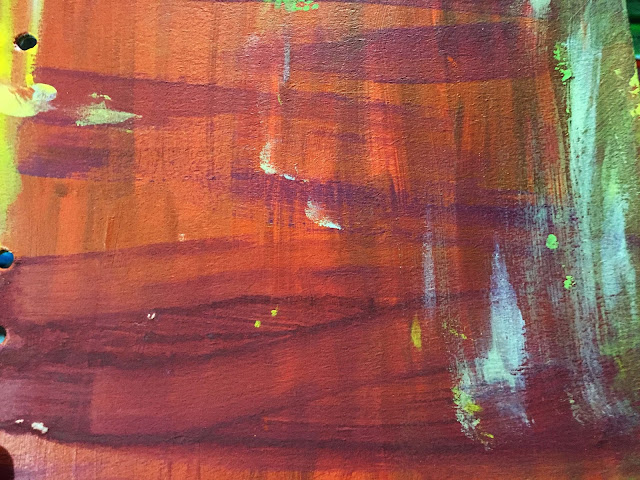 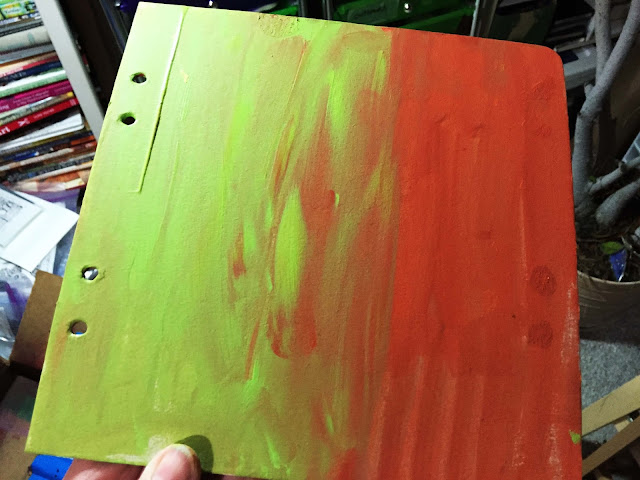 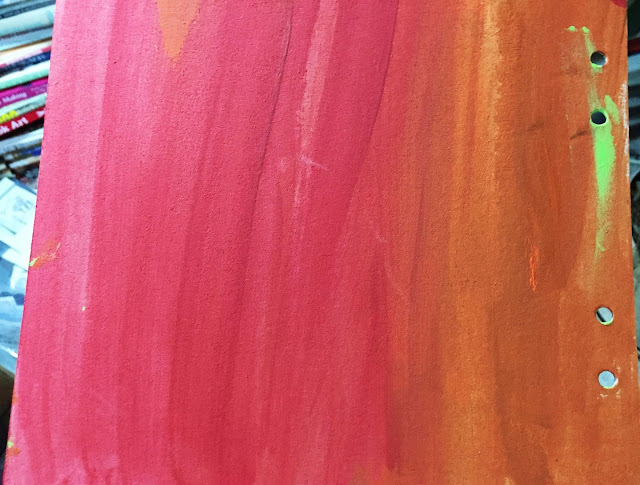 You can see I wasn't too fussy about the paint on my thick pages.
And have I started to add a few details. I will leave the rest of the page blank so there's room to add whatever it is I decide I want to put on the page. 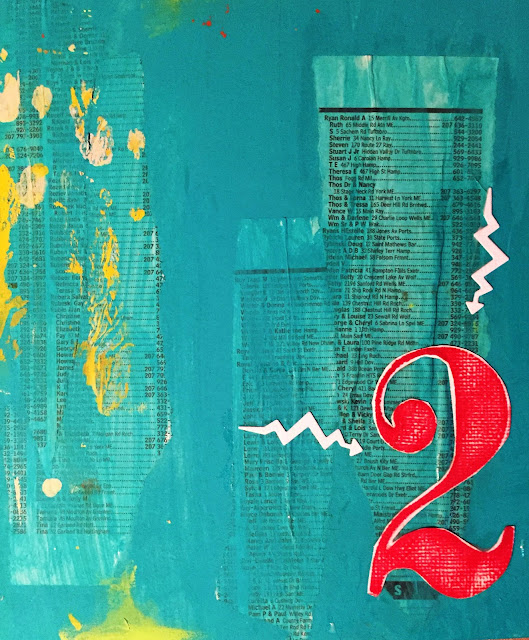 More phone book page scraps too.
And I  haven't glued this white Native American sun down, nor have I colored it. I was trying it out on this orange page.  It is the sun symbol for the Zia Pueblo people of New Mexico. 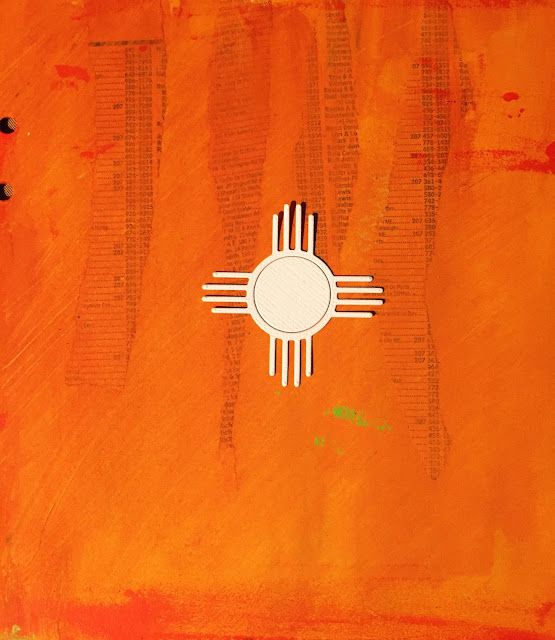 Its a really great sun symbol.
I looked up this symbol because I didn't know anything about it except it was Native American sun.
Here's what I found on Wikipedia.
"The Zia Indians of New Mexico regard the Sun as a sacred symbol. Their symbol, a red circle with groups of rays pointing in four directions, is painted on ceremonial vases, drawn on the ground around campfires, and used to introduce newborns to the Sun. Four is the sacred number of the Zia and can be found repeated in the four points radiating from the circle. The number four is embodied in:

If you are not familiar with the state of New Mexico's flag this is it.

This Zia sun symbol really makes a bold statement, even in its simplicity I think.

You might now be able to guess where I am going.
I'm off with my daughter (that is really exciting!) at the end of February when I have a week off from school. We're going  to visit some friends in Taos, New Mexico.
And I'm sure I will have more to show you in my journal and more to tell you about my trip some other day.
I hope your journey through today is excellent.

Its a pretty travel journal you have made. Happy preparing for your holiday in Taos.

LOVE what you are doing on our journal covers, and thanks for explaining about the Zia Indians, I ca understand the sun being a sacred symbol - no sun, no life. Have a great day, have fun, hugs, Valerie

Thoroughly enjoyed reading this so much that I didn't want it to end.
Love your journal (thanks for sharing the photos at different stages) and that was fascinating about the Zia Indians and number 4.
have a great day......... Gill xx

The journal cover is gorgeous. I really like the bold colors you used. Reminded me of glitz and bling.

The pages you have created are gorgeous. I was in awe of all of them, but really LOVE that you are using phone book pages.

Even before I saw the explanation, I thought, gosh Erika has copied the flag of New Mexico. Then I read on and was really impressed with your research on the Zia Indians.

Very excited for you to be visiting NM and especially a trip with your daughter sounds extra special.
The sun symbolism is powerful and your journal is looking fab already.
We were very taken with the Indian artwork on so many of the overpasses along the highway each with its own special meaning.
oxo

Wow, how beautiful! I love the gelli print background. And the cover with the gold. What an awesome idea! I have an altered book that I have almost finished. I haven't done anything for the cover yet. what you have here really is an inspiration. I hope I can get mine to look as pretty as yours is.

I am looking forward to seeing more of this journal - you have made a wonderful start to it! Atrip to Mexico sounds exciting! Hugs, Chrisx