And the Color Is? 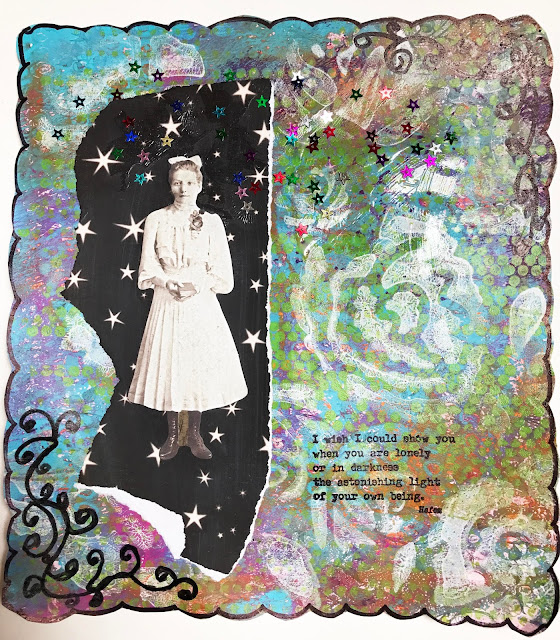 Hi everyone. This is the day we teachers in my school are all dreading. It's parent open house. It means we don't finish up until after 8 PM so it's a very long day.
But I can check it off the list once it is done. One step closer to next summer vacation.
Ha ha ha!
And today I have a page for Yvonne's Colour My World challenge at Art Journal Journey. The light washed up the upper right corner a bit when I went to photograph this, but you can see the swirly doodle lightly in the background. I really like the rainbow colors in the background.
My sparkle glue I used to attach the little stars doesn't look very sparkly in this photo. Once again, it was that evening light and the artificial light I needed to photograph.

I don't think I ever showed you these photos from my trip to New York State last August. On our way home we stopped at Saratoga Battlefield. Saratoga was a Revolutionary War Battle when the original 13 British colonies here in what became the US were fighting for their Independence from Great Britain. It was the turning point of the war when things started going in the way for colonists.
The battlefield was actually a very pretty place. 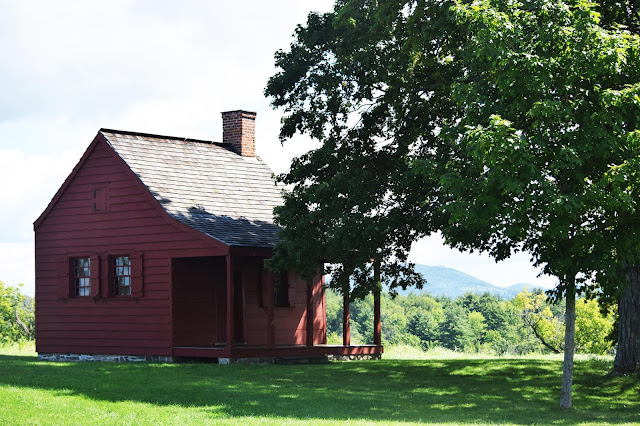 This little house was the American army's headquarters. I believe it is the actual building. Before the war it was a family's farm house. 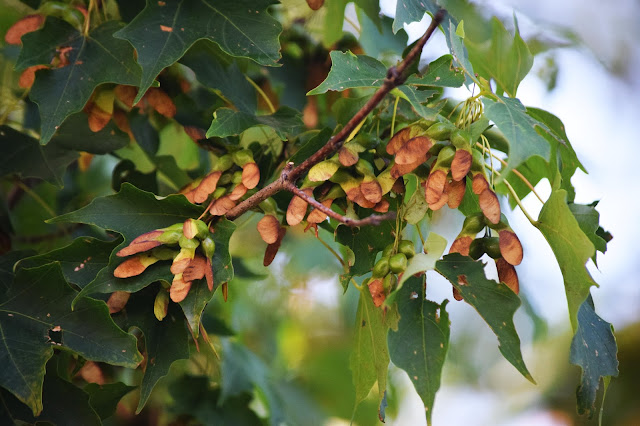 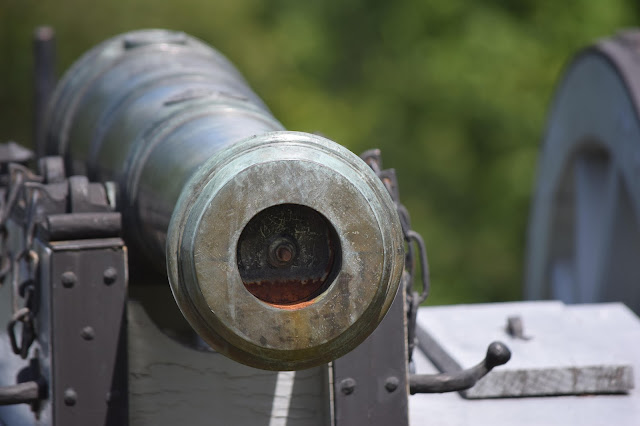 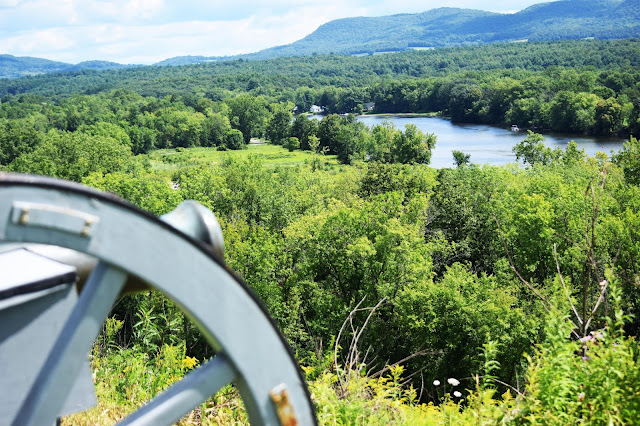 That body of water down in the valley is actually the upper end of the Hudson River. 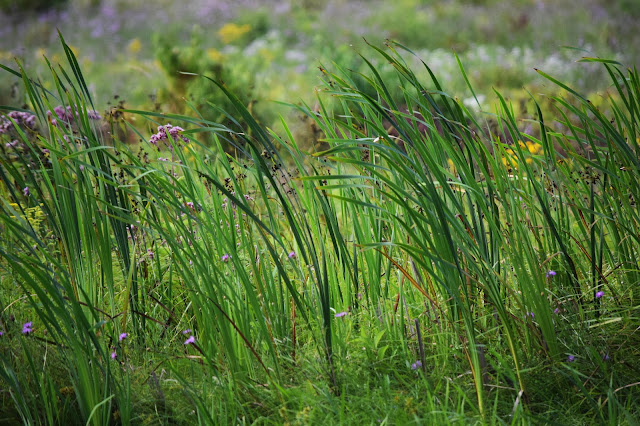 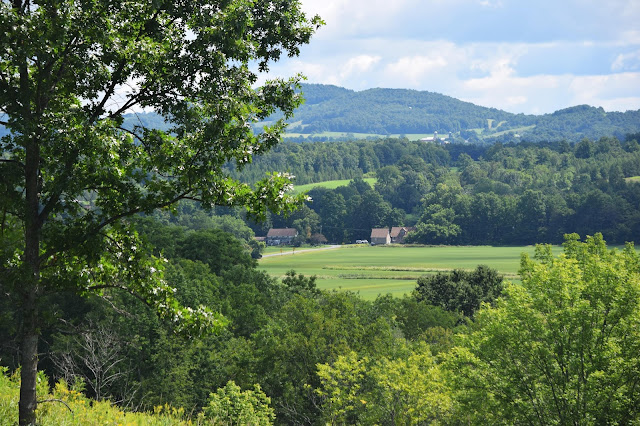 And I love the corn flowers. 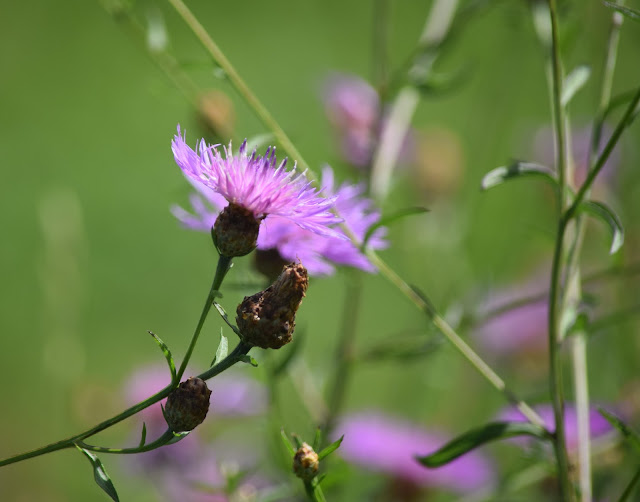 That's all for me. Hope everyone is having a great day.
Posted by My name is Erika. at 4:53 AM

I know what you mean, parents' day was always the worst of days, and we used to have 2 of them each year! Love your journal page, and the gorgeous quote. Great photos from Saratoga, too, looks so pretty and peaceful. Hugs, Valerie

Wow- this page is AMAZING! Thank you for joining Art Journal Journey again dear Erika! A beautiful place - I love to travel chair wise with you!Thanks for sharing with us!
Hope it goes all well and doesn't cost too much nerves today with the parents...lol! Weekend is near! ♥♥♥
We have sun and warmth again... every day a new weather for us!
oxo Susi

Your art for AJJ is fabulous. I really like the background and the wonderful way you used the TH doll.

It's amazing to me, because I've seen lots of battlefields in the south and they are all beautiful. You tend to forget how many lives were lost in the fighting. These are wonderful photos. Have a great, albeit long day at school today. Maybe the parents will be extra nice this year (grin).

I love your page. I can see some of the sparkles. I especially love the quote you used. It pairs so well with your page. I'm going to write this quote in my quote book.

Good luck with parents' night. It will go by quickly.

Its a fabulous journal page. I love the shades of colours in the lovely background. The quote you added is lovely, I like how the light does show on the background.
I hope your day went well, you will need to get a good rest and your feet up after the long day at school.
The photos were lovely, so sad to imagine this beautiful countryside being a place where folk lost their lives in battle.
Yvonne xx

This is so pretty, Erika. I love the blend of the colors, the swirls and all. A great interpretation of theme, too!

Saratoga looks like a lovely spot. Hard to believe a lot of carnage went on there. You live in such a historically rich part of the country. I think I could be there for years and not exhaust the historical sites and stories.

Speaking of which, I'm reading "No Ordinary Time" and thinking of you and your visit to Hyde Park --I need to go back and revisit those posts, now that the characters and their stories are so clear and vivid in my mind. I might tackle Joe Lash's bio Franklin and Eleanor next (after a mystery break). Or maybe hold that one off till the new year! Lots of pages!

I've never been there and appreciate you sharing those photos. It's wonderful they've managed to keep that house! Such a scenic sight, and it's hard to imagine what it must've been like as an active battlefield.

Beautiful page Erika! The rainbow colours of the background and the pretty stars you added are fabulous and I love the scalloped edging you have created too 😁. The battlefield looks such a pretty place and your photos are wonderful, just like you would find in a magazine! I hope your parent open house went well. Wishing you a very Happy Friday and weekend! J 😊

Parent's day, woa hope it all went well in the end. Lovely work and photos as always, greetings!

Thank you for sharing those lovely photos. An interesting bit of history.
Hugs,
Lisca