Hi everyone. I'm having a lazy Sunday morning. We're trying to decide whether to go boating or not. It's a little cool today, and we're both on the fence whether to go or stay home. If it was earlier in the season we would just stay home,  but the season is quickly waning so we say, how many more boating weekend days will there be? Too bad since tomorrow  is suppose to warm up and be summer like. Of course it will be Monday and we're at work. :)
No art today to show today, but thought I would share some late summer, early autumn photos from my walk yesterday. 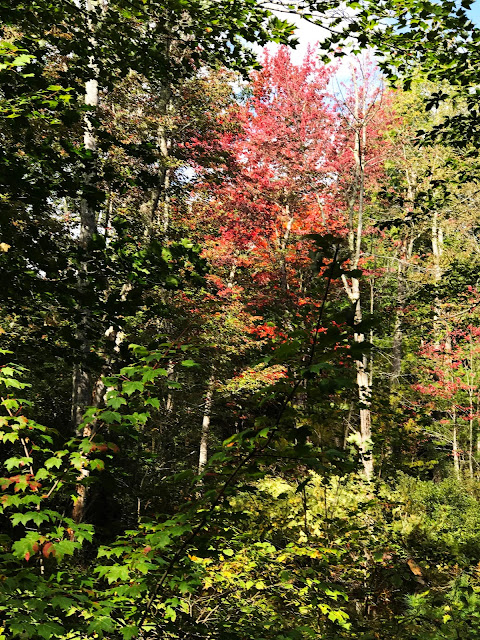 There is some color starting to show. 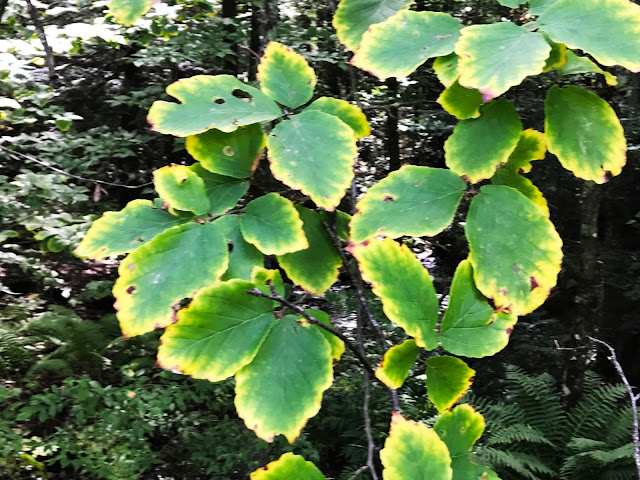 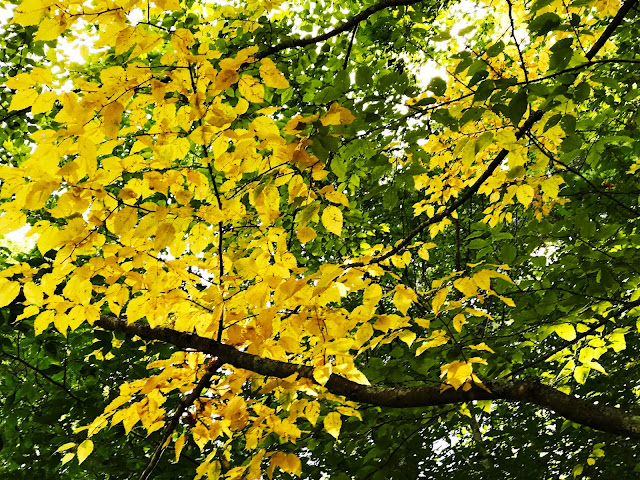 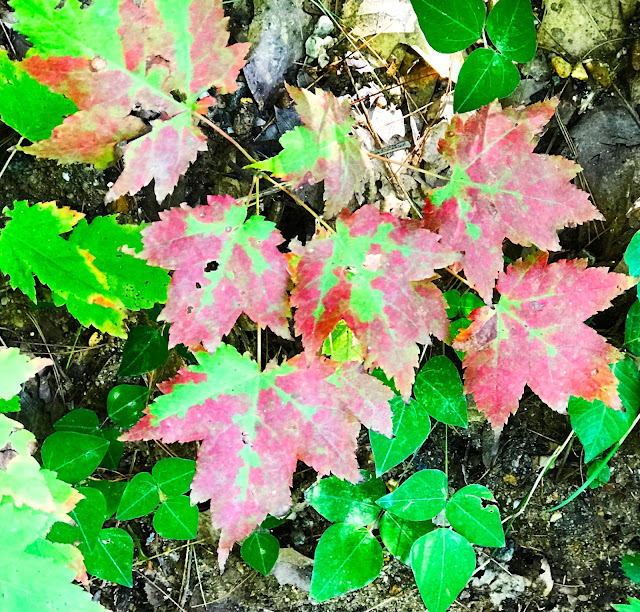 It seems early this year. 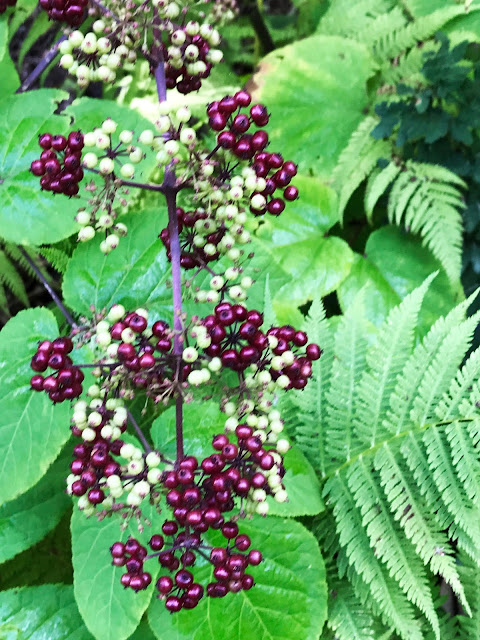 But I found some gorgeous colored berries. 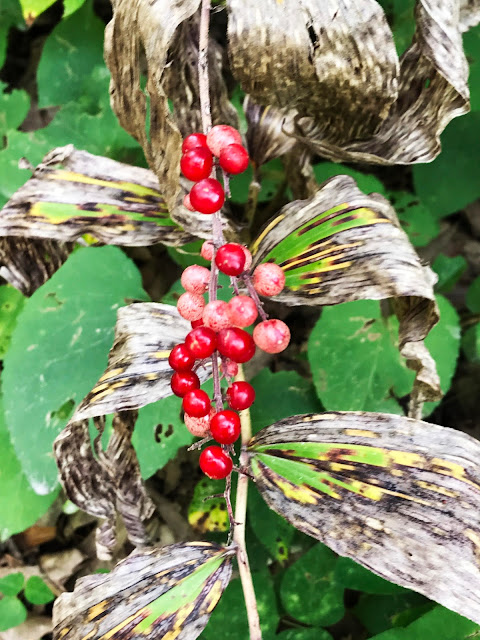 Plus the fall wild flowers are in bloom. 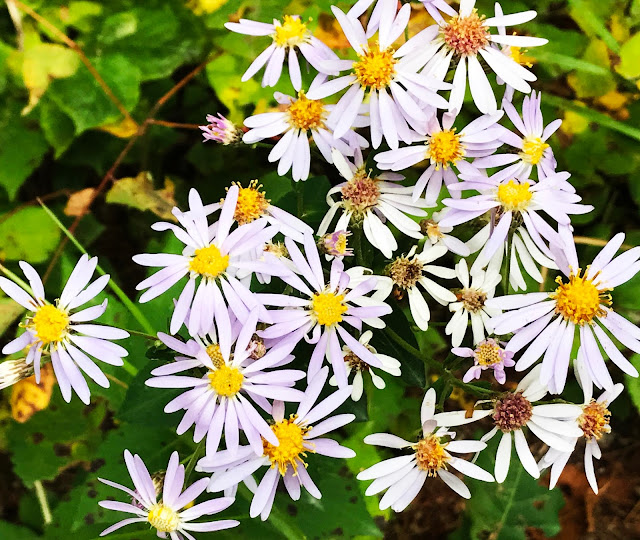 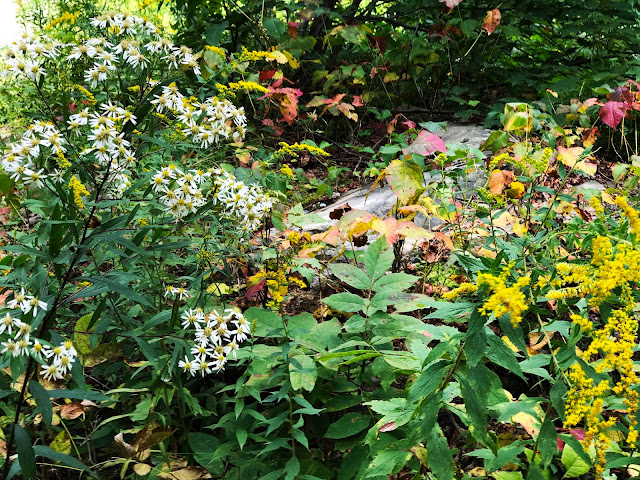 And did anyone say fungi? These were on a tree trunk. 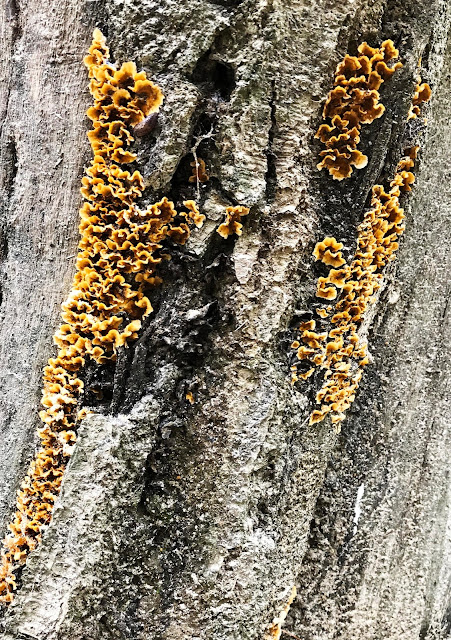 And this one that has already released its spores was on the ground. 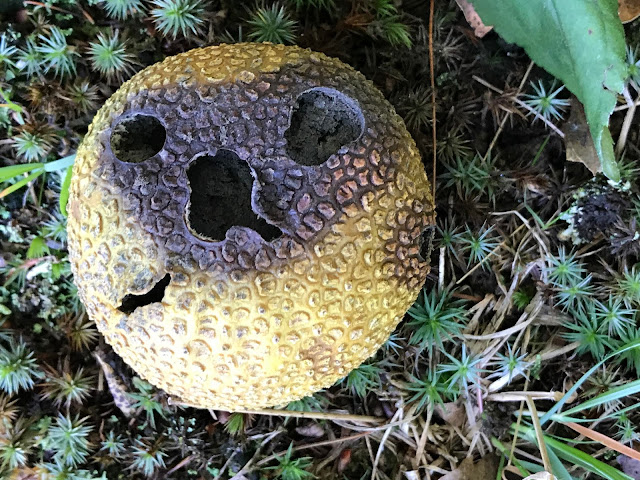 I also noticed that some tree stumps in our front yard looked interesting. These were little saplings we cut down about a month ago when we were putting up a fence for the dogs. 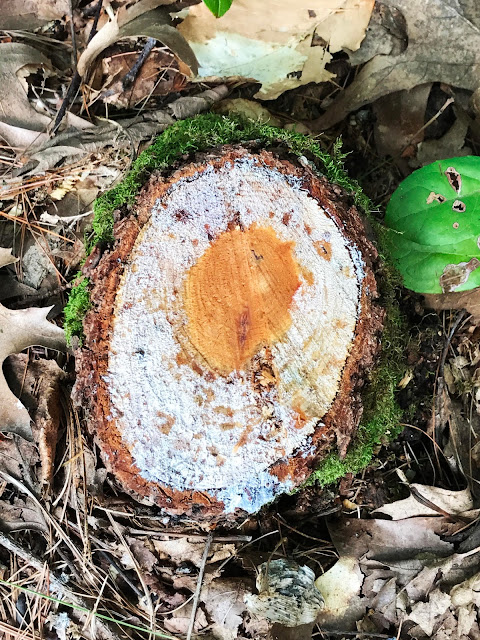 So after my walk yesterday I became an ambitious person and went up into my attic and did some book cleaning. Many years ago a friend suggested that if I had books I loved that I didn't want to get rid of but didn't want taking up all the bookshelf space, I should box them and put them in the attic. At least I could get to them if and when I wanted them again. It was a good idea, BUT, after 20 years there were a lot of books and they needed to be cleaned out.
Amazing how many good books I'd read that I didn't even remember. :)
So after going up and down the drop down attic stairs about 100 times, I ended up with 10 garbage bags of books that went off to a local charity last evening. Now I just need to go up there and do something with the empty boxes and maybe organize the keepers just a little bit more, but that will have to wait until another weekend.
But I did find some of my all time favorites.
They include:
The Girl with the Dragon Tattoo series by Steig Larson
11 22 63 by Stephen King
The Shipping New by Annie Proux
The Historian by Elizabeth Kostova
lots of the Stephanie Plum mysteries by Janet Evanovich
All the Harry Potter Books
The Pillars of the Earth by Ken Follett
Some of my childhood Nancy Drew by Carolyn Keene
A bunch of mysteries by Agatha Christie and Anne Perry
a paperback version of Gone with the Wind I bought in high school (still in really good shape for a huge book that I read at least 3 times)
The Bean Trees and its sequel from Barbara Kingsolver
along with a lot of books that I did remember loving. It was good to bring them into the light of day and see them again.
But strangely enough, another one of my favorite stories seems to be no place in my house. 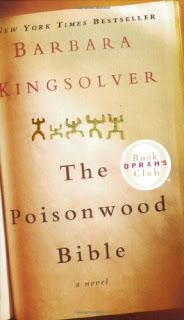 It's Barbara Kingsolver's book the Poisonwood Bible. Since 2017 has been the year of the book purge, and I can now say I have been through all the books in the house, I wonder where it went. I can't imagine I would have gotten rid of this book.
So I guess there is always a mystery waiting to be solved.
Enjoy what's left of your weekend or the start to your new week-depending when you get to read this.
Oh and before I forget, good wishes and safe prayers go out to those you you in Hurricane Erma's path. What horrible storm for many of you.
Posted by My name is Erika. at 10:00 AM

Wonderful colored leaves and other beautiful photos! It must have been nice to meet up with all the old friends in the attic! Happy rest of your Sunday dear Erika and have a good start into the new work week tomorrow!
Here we had to put on the heat as it got really chilly now!
oxo Susi

It certainly is one of those lazy Sundays of quiet contemplation. That's a lot of books indeed and it's nice of you to give to charity, hopefully it gets to the right hands who will enjoy and take care of them.
Greetings!

Wonderful photos, Autumn is really on its way, here too. Love the look of the fungi, too. Sorry you need to go to work tomorrow, but you know my fave saying is 'Reality continues to ruin my life! Well done on sorting all those books and finding old friends among them. Off to put my feet up now, I was out and about all day. Have a good start in the new week, hugs, Valerie

I love your touch of fall photos. We're seeing just a touch of color here, less than you. I always enjoy seeing the mushrooms/toadstools/fungi. You got some good shots :)

I remember reading the Proulx book for a book club. I can still picture some of it in my mind :) It can be hard getting rid of books.

It's nice down here. Not chilly though breezy. I think I'd vote to go out on the water just because there won't be very many weekends. You have a lot more color showing on the trees than here. the berries and flowers on your walk are gorgeous. I did a book purge a year or two ago. I wasn't reading any of the books sent them off to the library for their sale for others to enjoy. Enjoy the sunshine!

Oh wow. Autumn has truly arrived in your part of the world. I thought your photos actually rivaled with those I showed on Wednesday.

You really WERE productive today. Boy is your back going to feel it tomorrow. You have saved some wonderful books, too. I remember reading Nancy Drew when I was a child. I think every young girl enjoyed her. Enjoy your Monday back at school.

Congrats n the book surge! Lots of good ones, too. :)

sorry that you could not go for boating yet your walk sounds wonderful as i can see some gorgeous photos and tree stump seemed little scary like mask .
looking at the old books like meeting old friends after very long time .i can imagine how much tired you felt with such up and down running on stairs and came up with ten bags to giveaway which sounds like wise decision .
i loved sometime checking old books but as knowledge and wisdom in this world is developing so quickly and dramatically so preference for new books sounds appealing

Beautiful photos from your walk, the autumn colours are all beginning to show here as well.
I'd say well done for going through all your books that you stored. It is so hard to pass them on for others to enjoy, but I think there would be no space if we didn't, as books are much loved in our home as well.
Yvonne xx

You have the best posts ... we are in Mobile, Alabama escaping Irma . Don't know when we can go home ... no power and I am worried about our hose flooding. The island we live on is just north of Jacksonville. Obviosly, I will not be posting for a good while!
Sandy xx

Can you believe how the trees are turning already!! Are we in for a winter to remember or what. Shame you are working on this gorgeous week. xox

Good for you on the book purging. I have the worst time with books. I almost can't bear to part with them. But those that I know I want to keep -- mostly mysteries, France-oriented and British history -- go in one particular bookcase. (Actually, they're sort of spilling out and into the shelf of another). So they are at hand. And while I tend not to re-read in full, I'll sometimes go back just for part or a refresher if I'm ready to start th enext book in the series.

You have a little more color than we do but not much. I suspect it will come with a vengeance in another week.