T Stands for Wrapping Up the Old Year

Happy Tuesday everyone. And since it is already once again Tuesday, I will be sharing some T Day photos with the T Gang over at  Bleubeard and Elizabeth's blog.
It is hard to believe that last Tuesday was January 1, New Years Day. It seems once the holiday decorations come down and life gets back to "normal" again that the holidays were long ago. But of course, they weren't, were they?
If you have a drink related post join us for T over at   T Stands for Tuesday   also.
So let's go back to last Monday, December 31.
I was still on school break, and my husband decided to take that Monday off from work to give himself a second 4 day weekend, as he had one over the Christmas holiday. We knew we  were going to get a bit of sketchy weather that evening, so we decided to celebrate New Years during the day instead. We started off by going out to breakfast out our favorite local hole in the wall breakfast place.
I think lots of folks had the same idea because we had a 45 minute wait for a table. I think that is worse than on a weekend.

I snapped these while we waited in my husband's truck as the restaurant really doesn't have any inside waiting area and it was a bit too chilly to stand for 45 minutes outside. 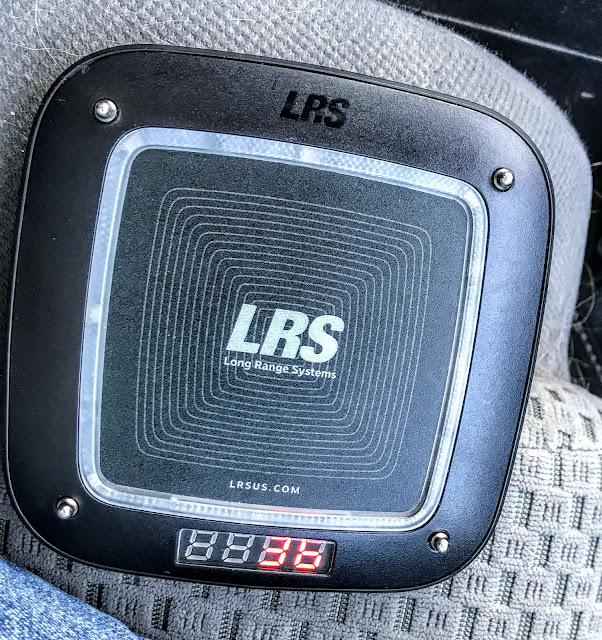 Once we got a table I had my usual egg, hash and baked beans, which I totally forgot to snap a photo to show you. But while waiting I had a cup of their delicious homemade cocoa with real whipped cream. I figured I had been good for the couple of days before that one, and the "diet" would start on the first. 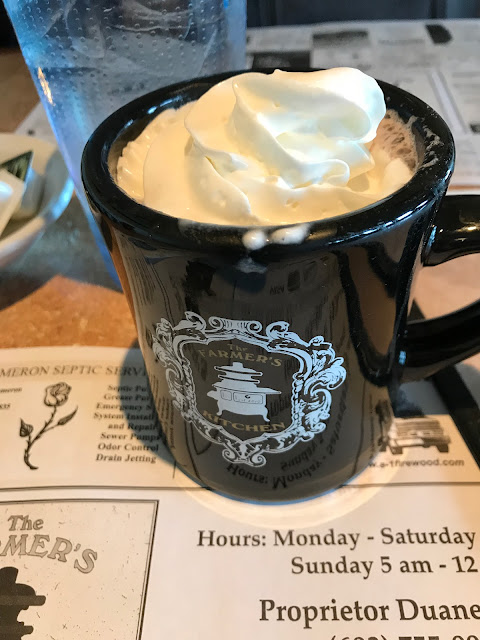 Afterwards we headed back to the beach, this time York Beach in York, Maine. It's not a bird watching spot so I didn't go looking for snowy owls this time, but at low tide there's lots of walking area and the sand here gets hard. My dad used to refer to this beach as Hard Sands, but it's actually called Long Sands. 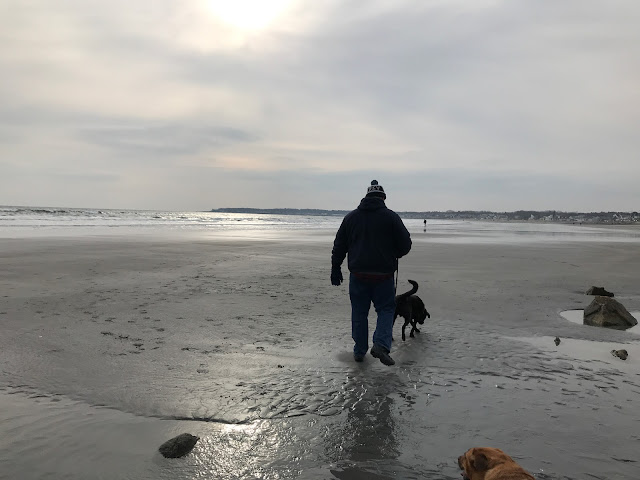 The clouds from the New Year's Eve storm were starting to roll in by the time we went walking, but it sure made for some great lighting for photos. 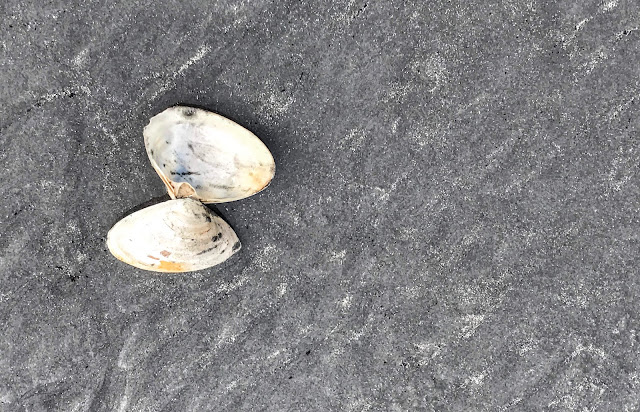 And of course we brought the dogs along. They love a good beach walk. Infact, for some reason they get so excited they need to act like crazy dogs and jump up on their hind legs and growl and play bite each other. Only at this beach though. I don't get that part. 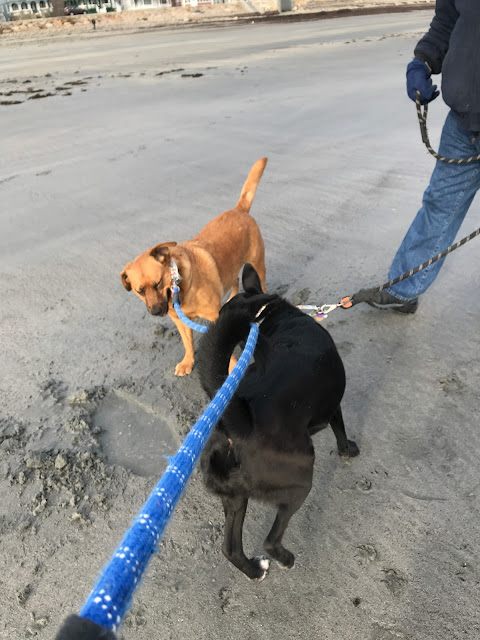 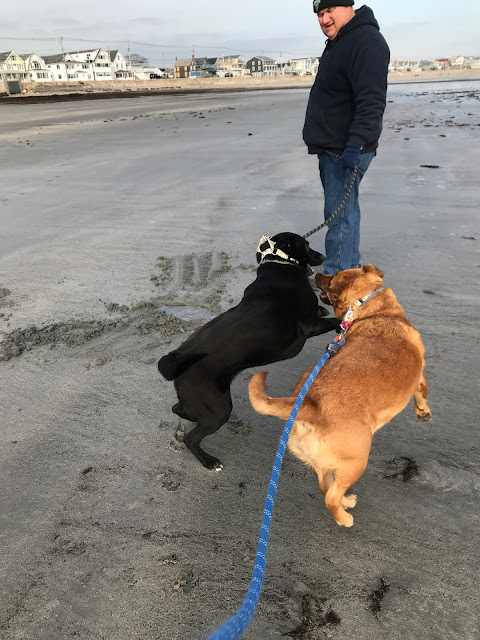 But then they settled down into walking mode. 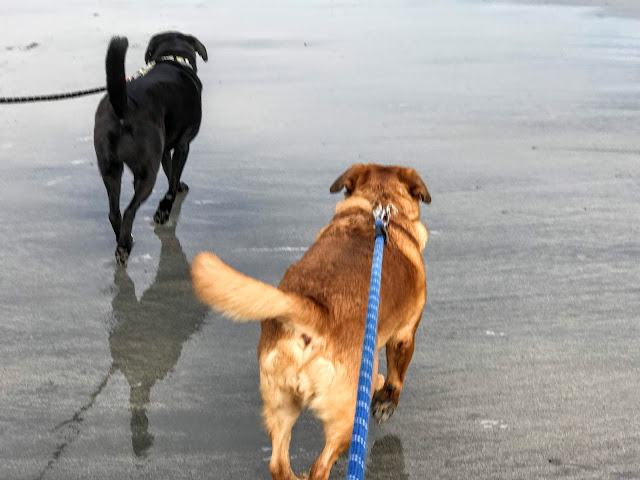 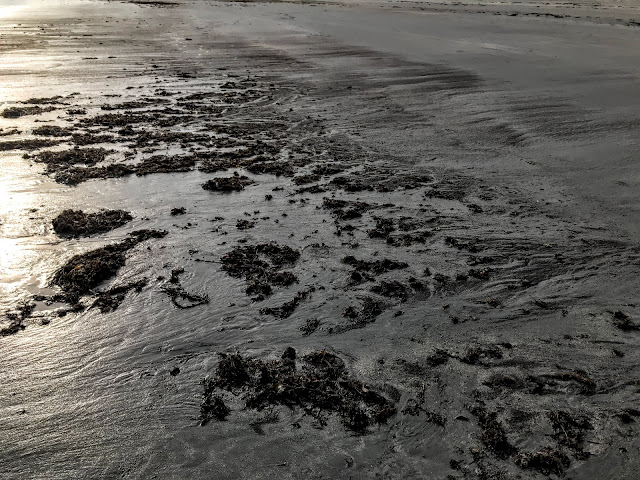 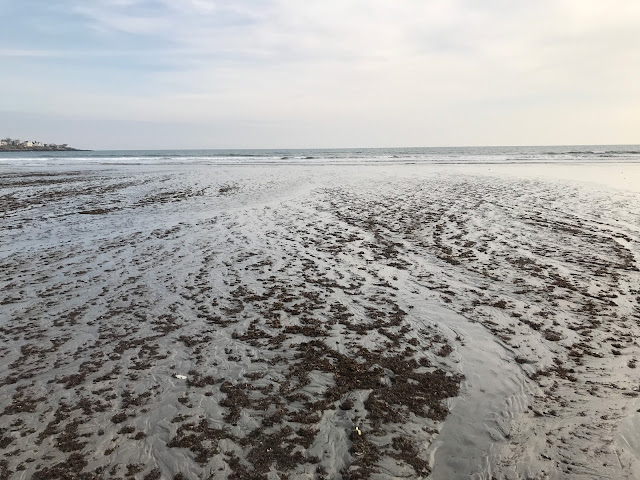 Back in my youthful 20's I used to rent a furnished  condo here from September through June. It worked out perfect for me because I could walk this beach most days after work. And then when school got out in June, I could move out and the owners could rent it out for the summer. I think I used to pay like $240 a month to live at the beach off season. I can only imagine what it costs now since I have been at this job for 35 years. Holy cow. I didn't imagine that would happen back when I lived here in York. 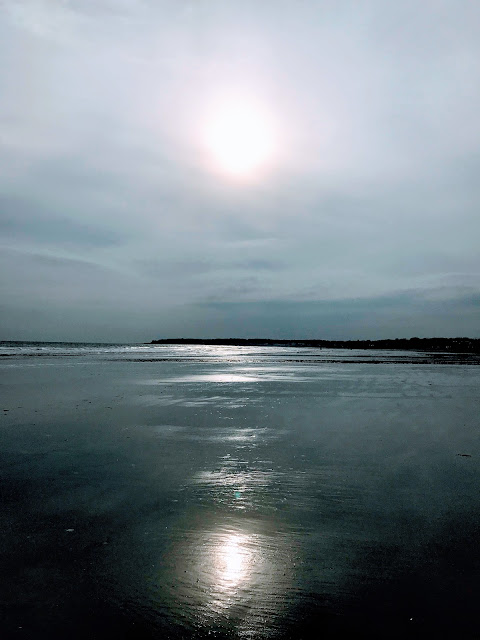 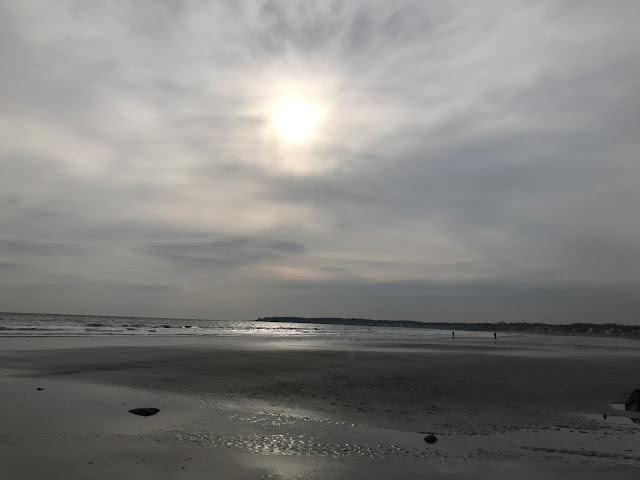 This was my perfect way to wrap up the old year and celebrate a new one, since I love going out for breakfast and a good beach walk.  Think I will have to make this more of a priority in 2019, well at least before it is beach season and they then charge for parking and the beaches are packed with sunbathers.
Have a happy T day my friends, and for the rest of you who didn't stop by for T, hope it's a great day also.

Wonderful photos, especially those of the beach, and your doggies are having such fun, too. My dogs always went crazy at the beach, just like kids, I suppose! You must have enjoyed living there back then! Glad you got out for a nice breakfast with cocoa, how lovely! Happy T Day, hugs, Valerie

I always enjoy baked beans with breakfast, but it is rare, at least in my experience for restaurants to serve them, whereas in Britain it is standard fare. Now if only you could get good black pudding in North America!

What a perfect way to wrap up the old year. A great breakfast, then a walk on the beach. I know you and Linda love the beach, but for some reason, I can't get into it. I don't know why. My favorite beach was in So Carolina. It was warm, off season and I could drive on this one. It was the highlight of my trip. Other than that, I think you were really lucky to have lived on the beach, since you like it so much. Thank you for taking us with you on new year's eve and sharing your cocoa with us for T this Tuesday.

This is the BEST way to wrap up the new year. Smart to celebrate in the day, too, especially with dicey weather and oh, I love breakfast out!

But York Beach. This brings back memories. Back in the 80s my friend Suzanne and I did a road trip to New England and spent a couple days at a B&B at York Beach. It was just beautiful. We were off season -- I think late October (I don't remember seeing any color) so everything was pretty much closed down in terms of "attractions" which gave it an eerie quality, yet the days were blue-sky and really fine. Seeing these pix reminds me of that time, the magnificent ocean and beaches and nearby lighthouses... all good!

A terrific post and I was with you all the way on your perfect day. All the things that Vic and me like to do as well thpugh we don't have a dog. Plenty of them on our beach all the time

Have a great at Day

First of all I love your new header with all that yummy texture! And, the beach, well, you know I have lingered over your pics quite a long time:) Love the happy pups taking it all in too. Glad you were able to enjoy such a lovely end of the year. Happy New Year and happy T day too!

I love going out for breakfast. And since you were planning on a walk, the whipped cream on your hot chocolate wouldn't hurt.I love Long Sands. So many happy memories from my 20s. My girlfriend and I would go up every weekend in the Summer. We stayed at The Anchorage for cheap. Would drag our beach chairs across to the beach. Your puppers must pick up a great vibe from the beach to get all excited about being there. Happy T Day

aaah, a long beach walk... and cocoa with whipped cream then... so sad there is no beach nearby!
hope you will have a gorgeous 2019 with many happy t-days! xox

That homemade cocoa sounds perfect! I think I'd want another cup after that walk :) Walking on the beach as a regular activity sounds delightful. For me it's been a rare vacation treat, but I treasure the memories. Happy T Tuesday!

Sounds like the perfect end to the year to me too! The breakfast sounds delicious with that delicious looking hot chocolate topped with cream 😁. I actually had one like that today with my mum when we went shopping - so yummy...lol 😉. It must have been beautiful walking on such a lovely beach and the dogs looked like they enjoyed themselves too ...lol 😀. Wishing you a happy T Day! J 😊 x

Oh what a lovely beach walk. Blow away the cobwebs as they say. You are lucky to live so close to the beach. Our beach is one and a half hours by car (the nearest) so the thought of a beach walk doesn't occur to us.
Here in Europe we don't get the idea of queueing for a restaurant. If all the seats are taken, we go somewhere else. If you are sitting in your car, how do you know it is your turn anyway. There would be a lot of queue jumping here, I bet.
Happy T-Day,
Lisca

Holy Cow! $240. a month!!! Even in "off season" around these parts it's double, if not triple that! Yes, times have gone by and I'm sure that rent is long gone too.
You photos are awesome.
Happy T-day

What a lovely way to see the Old year going and the New one coming in.
The dogs looked like they were very happy to be out for a walk on the sands. The photos looked fantastic. I enjoyed reading your post Erika and thank you for sharing your memories.
Happy T day wishes.
Yvonne xx

Some amazing views! The perfect way to relax and spend the new year. And that hot cocoa looks yummy!!
Happy Tea Day,
Kate

Oh Erika a fabulous way to wrap up the old year! Wonderful photos and I can imagine that it was a fantastic time back then at the furnished condo!
About the dogs and the beach craziness. Our dogs get crazy when the fields are harvested and harrowed.
They always play gladiators and enjoy it so much.

Happy belated T-Day!
Everything o.k. here at my end of the world - lots of snow lately!

I agree that was a great way to wrap up the year, Erika. The 2nd last photo is stunning.

I love your story about renting a beach house off season. What a great deal and wonderful memory. Your dogs are so sweet.