Hi everyone. I hope you had a nice weekend.

I had a good weekend, but it was busy since my daughter and her beau came early Saturday afternoon and left later Sunday morning. They invited me  with them to go for a walk at University of New Hampshire where they both went to school and met. It was a nice afternoon and a much needed walk. My husband was off putting his boat away at his Mom's house; he came home very tired at almost dinner time. His mom is  getting to be quite a handful; hopefully she will be moving into his sister's house (not a great situation either) soon. It least when she moves it takes a little bit off my husband's shoulders, but obviously not his sister's.

We did have a yummy birthday dinner Saturday night, even if I had to make the popovers twice. I greased the pans to the max for batch one yet I couldn't get them out of the pan. The second time around I greased and sprayed and that worked. Hurrah.

One gift I gave my daughter for her birthday was the Harry Potter version of the game Clue.  If you aren't familiar with the game Clue, you move around the game board visiting rooms, and you have to figure out who the killer was, what weapon they used and what room was where the murder occurred. This time you had to figure out using some Harry Potter, villains some deadly items from the series as well as some rooms at Hogwarts. The game also added another level with these discs you turned which opened and closed doors to each room and changed the secret passages. Plus there were Dark Arts cards that could make things tougher for any player. 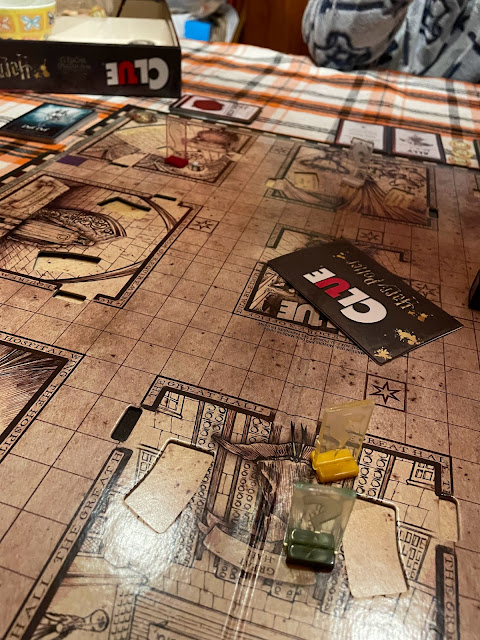 We played until quite late, but it was a fun evening. And a good visit too.
I want to share another My Favorite Colour is October page for Tracey's challenge at Art Journal Journey 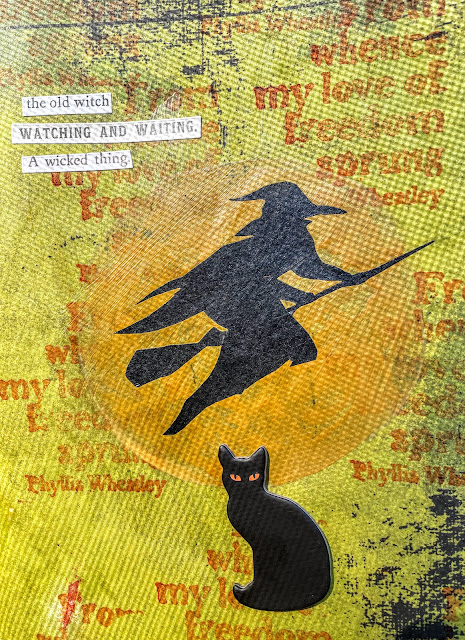 This is a page in Halloween journal. I stamped the quote in the background on my dirtied yellow paper. Then I painted the big moon. The witch is fussy cut and the kitty is a sticker. Good thing last week's Hunter's Moon isn't on Halloween this year.
I also have another tag for Michele's All Hallow's Eve challenge at Tag Tuesday.
It's not the most complicated tag I have ever made, but it works for the challenge. Plus, I like it! 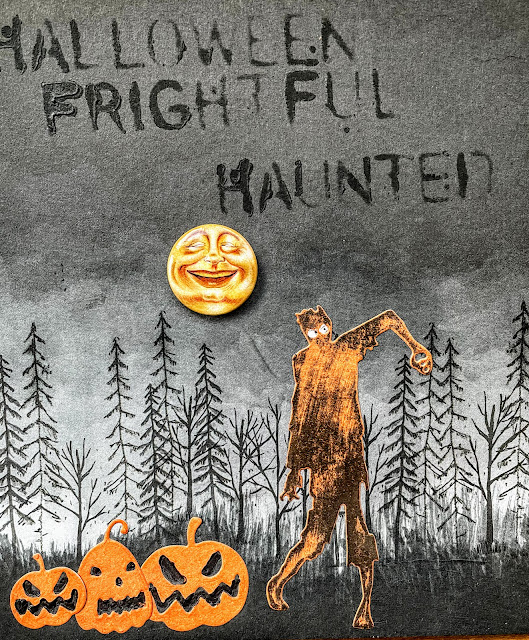 The background is this great piece of 6x6 paper I cut down and attached to a rectangular tag.  The zombie and the pumpkins are die cuts. I shaded the zombie a bit since I wanted him to stand out, but  he was a little too orange. I stenciled the words and then added a small metal pin moon head.
Have a great new week.  And thanks for visiting my blog.
Posted by My name is Erika. at 4:38 AM

Oh I looove your Halloween page Erika! I missed seeing your blog especially your journal arts! I am so happy to be back here :) Love the game, I haven;t played that before but it looks so fun!

A wonderful weekend! I haven’t heard of that version of clue, a favourite board game in our home, I will search it out! Your journal sounds wonderful, my eyes won’t let me see but I know it is! 👍❤️

Love your Halloween page and the tag for Tag Tuesday, thanks so much. Glad you had a great weekend with your family, and I LOVE the sound of that game, must see of it's available here, I would love it! Looking after elderly people is difficult, and a big sacrifice for the 'children'. Have a great week, take care, hugs, Valerie

Happy Monday, your art is so fun for October-loving it. Sounds like an awesome weekend with your daughter and beau. I have never played this game but sounds fun. growing up we always played allot of board games together-and enjoyed bowls of popcorn fun family memories. hugs

I didn't realize there was a Harry Potter-themed Clue! Sounds like great fun.

I give no little thought to how to be less trouble if I live that long, and it's hard to know what to do for the best.

Glad that you had a FUN though busy weekend. I love the Harry Potter version of the game Clue that you gifted your daughter. I should get one for my husband!

In case you're interested Foolproof Popovers Recipe I'm not a big fan of Harry Potter, but the Clue game sounds a lot more fun than the old Clue that my cousins and I played as kids. Fun Halloween pages especially the one with Ink. Stay warm and dry today.

I used to play Cluedo which by the sounds of it is the same as your Clue but i have never heard of the Harry Potter one - that sounds great fun and one that I would love. Lucky daughter.
Lucky us too, you Halloween page is lovely. I do like the black against the yellow and orange and the page looks textured. Not easy to do words on but you managed fine.
Lovely tag too, the zombie is quite scary and against that backdrop of bare trees he looks very realistic. Love the pumpkins and today I saw some tiny ones in the supermarket and just had to buy me one - I think of you when I see pumpkins because you were the person who showed me the pumpkin farm. Great photos they were.
Hugs, Neet xx

I've never watched Harry Potter or read the books, either, so I would be lost at that game. However, I have played Clue and it was always fun.

Sorry to read about the popovers. I want to see the PIE (grin).

Love your art today, Erika. I don't understand how you get so much art made when we both have the same number of hours in a day. The tag is wonderful. LOVE the man in the moon pin, too. And of course, your Halloween inspired art is fabulous. You KNOW I am going to love it when there's a cat involved. Thanks for another great page for Tracey's theme at Art Journal Journey, dear.

I love your dirtied yellow page and the way you coloured the zombie, he looks perfect. I didn't know there was a Hogwarts version of Clue (we used to call it Cluedo) so I guess it's Professor Snape in the Dungeon with a lead pipe now is it? lol Elle xx

Now I get to read that you did have a good weekend with family, yes I believe we call that game Cluedo here but i'm not aware of the HP version, a great game though. I hope Hubby can soon feel a little weight off his shoulders regarding Mum, I hear everything I read as both me & Hubby are going through the same with both our Mums.. sadly we both have no siblings to carry the load :(
Another great journal page Erica, I smiled at the cat which seems oblivious to the witch flying over his head :))
Take care Hugs Tracey xx

i love these hallowe'en creations, they set just the right spooky mood! thanks for joining our challenge at tag tuesday! xo

We enjoy a good board game in this house too, nice way to put a cold, wet evening in. Oh your tag is super spooky. I hate Halloween night, my imagination always gets the better of me lol. Happy Halloween! Thanks so much for joining us at Tag Tuesday.
Pinky