Hi everyone. Happy middle of the week to you.

It's not really my party today, but childhood birthday parties are the topic of my journal page.  Chris picked the theme When We Were Young for her challenge this month at Art Journal Journey, and that's where I went with this page. 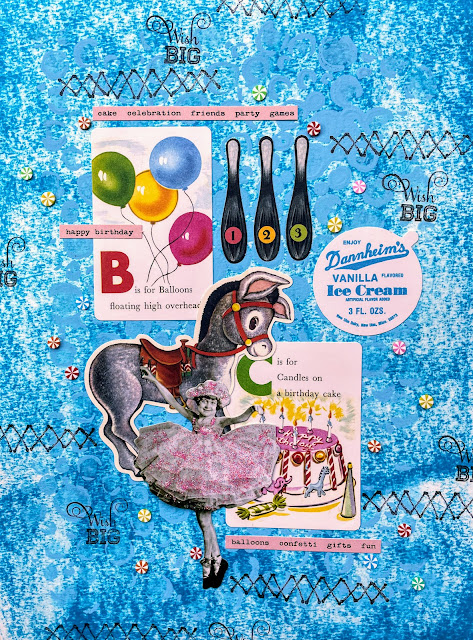 I had some bits and pieces in my art fodder stash that I thought worked great for this theme. When I was in second grade ( I think I was  turning 7), I had a big birthday party with my friends, and I remember we played pinned the tail on the donkey. I don't think kids do play that game any longer, and especially since now so many kids have  parties at play places, pools, amusement parks and other places like that.
I  always had small family birthday parties during my childhood, but can only remember this one with friends. Of course my mother frequently worked when we were young as a substitute teacher at the elementary school where we went. It was weird the days I had her for a teacher as all the kids knew she was my mother, and she would get mad at me because I called her Mom instead of Mrs.___. Not that the kids in my  class were mean  to me about it, but it is weird having  Mom for a teacher.
I made my page by inking my background blue and then stenciling blue dots over the blue ink. That created a little more depth than my plain inked page. Then I arranged and added my art fodder, including the TH girl. I had to add some pink sparkle to her dress because she is the birthday girl and wants everyone to know it.  Besides birthday cake, they are also having little ice cream cups. I haven't seen any of these little ice cream cups in ages.The ones we had were called Hoodsie cups, after the Hood milk dairy that made them. Basically you pulled the paper top off and ate the cup of ice cream  with the wooden spoon that came with the cup (Now they are probably plastic and nowhere near as eco friendly as what I had back in the 1960's at my party.)
Finally I stamped the cool stitch looking image and the birthday words. After that I also added some little foam confetti dots to finish off my page.
I thought I would also share some photos from one of the places I visited while away last week in the Berkshires.  This was one of the highlights of the trip for me. We went to  TurnPark Art Space, which is an outdoor sculpture park in West Stockbridge, Massachusetts. You can read about it here if you're interested: Turnpark Art Space.
Turnpark Art Space was started by a Russian and also a Ukrainian immigrant.  I love how they had some art dedicated to ending the current war.  I was surprised that the park was bigger than I expected, and I really enjoyed a lot of the sculpture we saw. Here's a few things that caught my eye.
These fish were part of an exhibit called Make Fish, Not War. 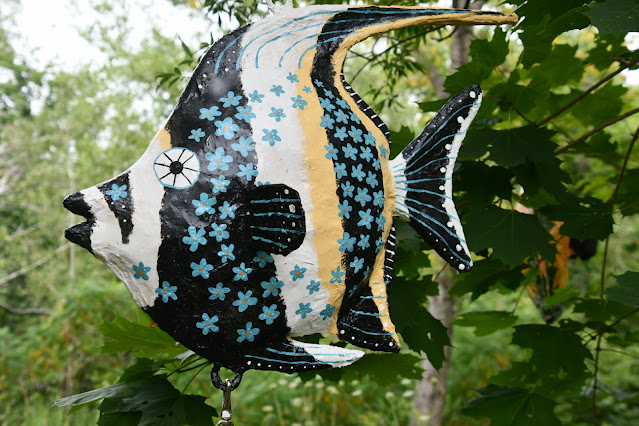 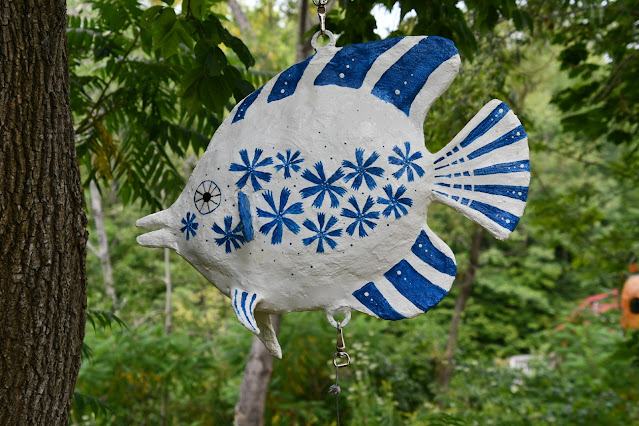 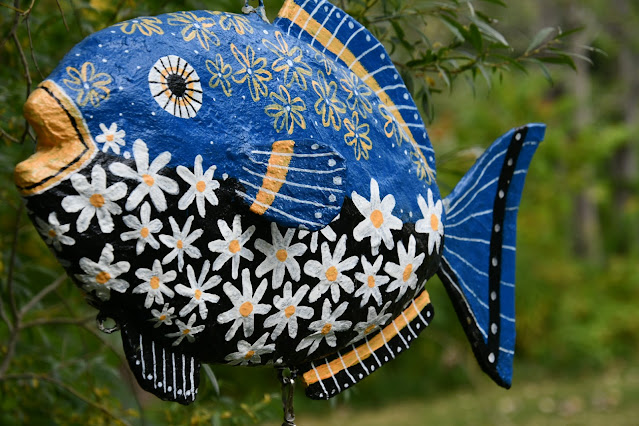 A view from the grounds looking down towards one of the indoor galleries. 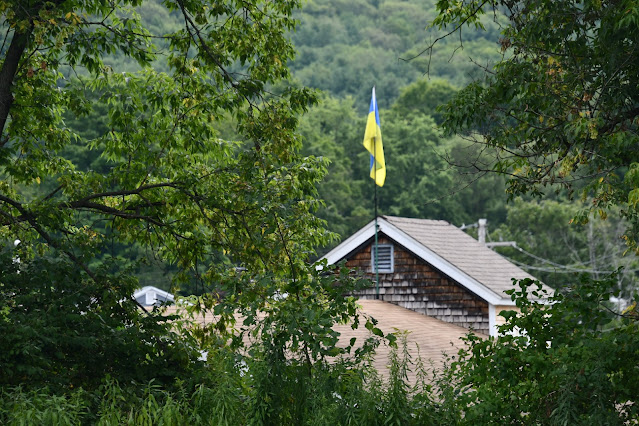 This wooden structure was called Eyeball. The  artist was a photographer who took some photos early on in the Russian Invasion of Ukraine. 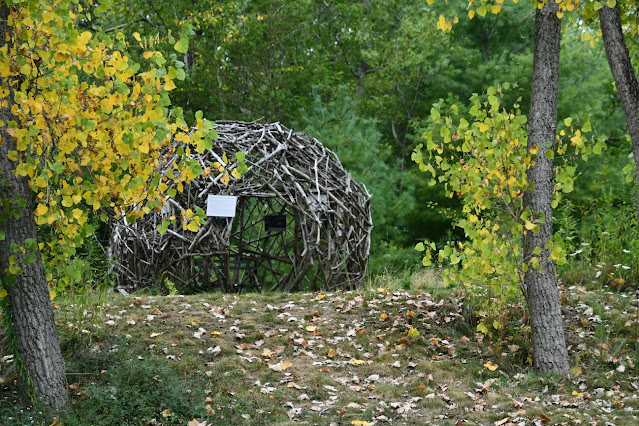 Inside the eye shaped structure, he posted some photos he took. 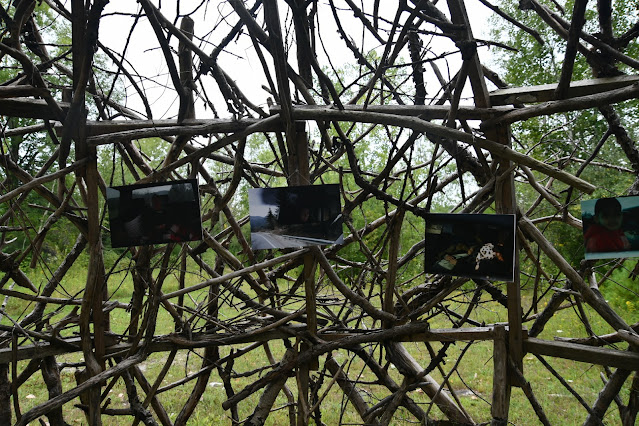 And the eye itself was a fascinating weaving of twigs, with the pupil looking upward. 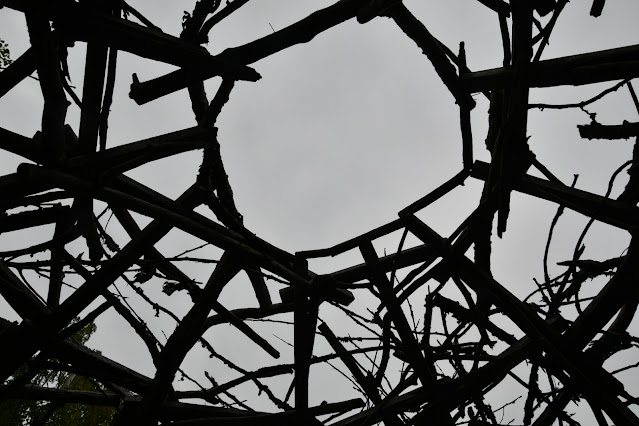 One artist covered bits of the tree bark in cloth painted blue and yellow. She then did some bark rubbings.
The wooden structure  on the left was built to represent a rock, and its organic shape. I'm not sure the rock shape had anything to do with the Ukrainian flag rubbings on the trees. 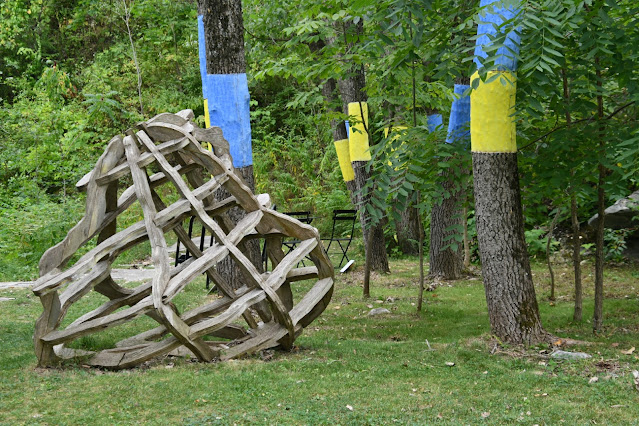 And I liked these chairs.  They may have nothing to do with Putin's War, but can you visualize the people sitting in them? It is clearer in the second photo. 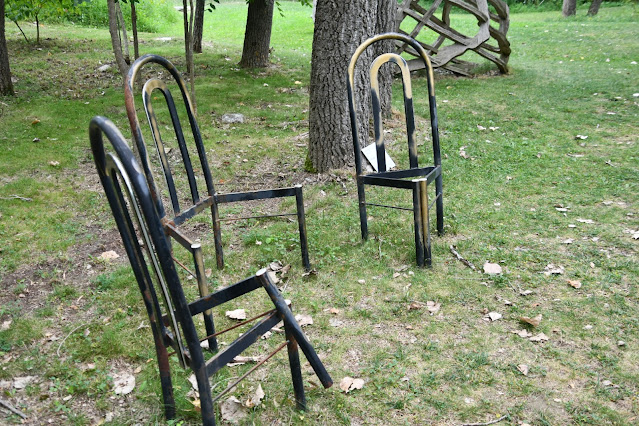 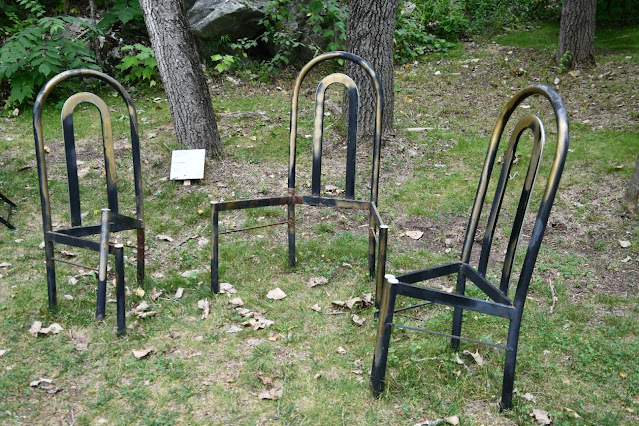 And finally for today, one last chair. This piece was called Balance, and this chair was really tall. 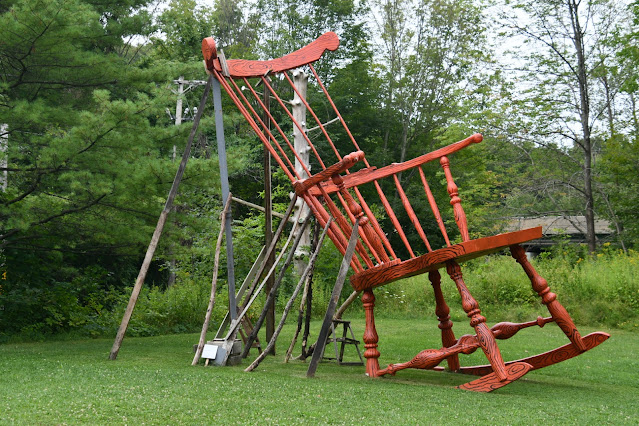 I hope your week is going well. I'll share more from this park another day.
Thanks for visiting. 😅
Posted by My name is Erika. at 5:17 AM

Such a cute and fun party page! I love that Balance Art in the park.

My birthday is during the Summer and everyone is away on vacation. I had one birthday party when I was 5 with Himself and his siblings. My cousins. It's the only children's party I remember having. Most times, my parents would use my birthday for a family reunion/gathering.

Your page brings back a lot of nice memories of birthday parties I attended for classmates. We played pin the tail on the donkey, dropped clothespins into milk bottles, and wore pretty party dresses. Kid parties aren't like that any more.

I hope yesterday brought you some rain. We had lots and the grass greened up overnight.

Nice birthday art. My mom always had wonderful parties for me and my 5 siblings. Another wonderful place to visit. Have a nice day today.

For m y30th Birthday my colleague wanted to hire a donkey where I should ride backwards on, cause I wasn´t married - he wasn´t married, either.
He didn´t dare to get that donkey ;-)

Oh - own mother as teacher sounds hard! In many a way!

Yes, ... Russian, Ukrainian, we are people.
Great art, together!
Hugs from here, glad we can live in peace...

I prepared something for the theme "Keep it simple" :-)

I enjoyed your post Valerie, Loved your journal page-and that would be weird having Mom as your teacher-she was probably harder on you too.
awesome art park-loved the fish
thanks for sharing the park Happy midweek Hugs Kathy

I adore those fish in the sculpture park. I'll have to add that spot to my itinerary next time we visit Randy and Elaine. Birthday parties... I really only remember one with friends. There may have been more (in fact, I know there was one when I was four or five -- I have pictures -- but no recollection of it!). It WOULD be hard having mom as a teacher in your school.

I love the birthday party themed journal page. I had one birthday party in my life as a child and it was a surprise party given by the lady I babysat for. I turned 16 and was blown away by her generosity. This makes an excellent entry for Chris's theme at Art Journal Journey.

LOVED the fish. Can't wait to see more of this park because I went to their web site. I enjoyed the chairs and the rocking chair, too. Such wonderful art and sculptures, Erika. I can see why you wanted to visit.

Oh that's a perfect birthday party page, Erika. Love all your elements. I think we all played Pin the Tail! I had some skating rink parties too, but can barely remember them. I love the 3 chairs, so clever, and it is indeed easy to visualize a man in the middle and a woman on either side of him, lol. XOX

A great page, brings back happy memories.
Wonderful sculptures too, I love the fish!

Fun birthday art, Erika, and Hoodsies were new to us until we tried them a few years ago when we had a TV dinner and Hoodsie party with neighbors at our apt. It was to celebrate a long delay in the arrival of our bedroom furniture. At the time, there was still a wooden spoon supplied with the ice cream.

The art space looks like a fun place to visit, so I checked the distance from Nashua, NH, to Stockbridge, MA. Since it's over 2 hours, itv might be a good getaway trip in the future.

Fab photos, fab installations! Thanks for sharing.
I love your party page. If memory serves me right I did not like going to parties when I was young. I remember faking feeling ill for one and the mother of the little boy brought me jelly and things around afterwards. What a horrid child I was to do that. Don't know when I outgrew it but I remember going to a friend's party and playing all those parlour games, musical chairs, etc. Had a great time and it was probably my first sleep over as it was quite a journey to hers.
Thanks for reminding me of the games and parties Erika, love the page with so many memories on it.
Hugs, Neet xx

My Mum always did parties for me and my brother- they weren't grand affairs - a few friends, party food with a decorated cake and then party games. Your page reminds me of all of those parties, thanks so much Erika, it's a wonderful page for my AJJ theme.
I love sculpture parks and this looks like a really interesting one, I hope you have more phots, hugs, Chrisx