Happy Tuesday everyone.  Tuesday means it is T Day once again.
This past weekend I had a quiet Sunday and since I've been wanting to do some baking, it was a good day to do it. One thing I wanted to make was some mini-muffins. 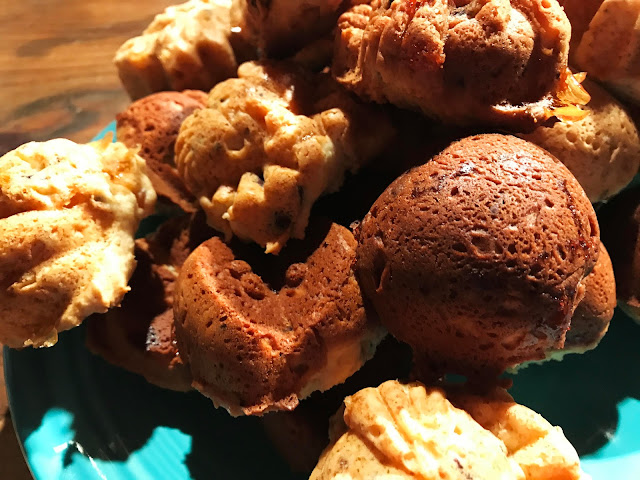 I have an autumn mini muffin pan that makes some little pumpkins, turkeys, leaves and apples. And since its autumn it's time to use the pan. I had no sour cream which my recipe called for so I added lemon yogurt along with some chocolate chips and some orange flavored gummies. Gummies are little baking bits made of a jam like material that melt into jammy spots.
And then I wanted to try a new recipe. A few weeks ago Elizabeth shared with us that she had some flan for dessert. I'd never had flan, and I am always up for a baking adventure. Elizabeth was kind enough to share her recipe with me, and I gave it a try. 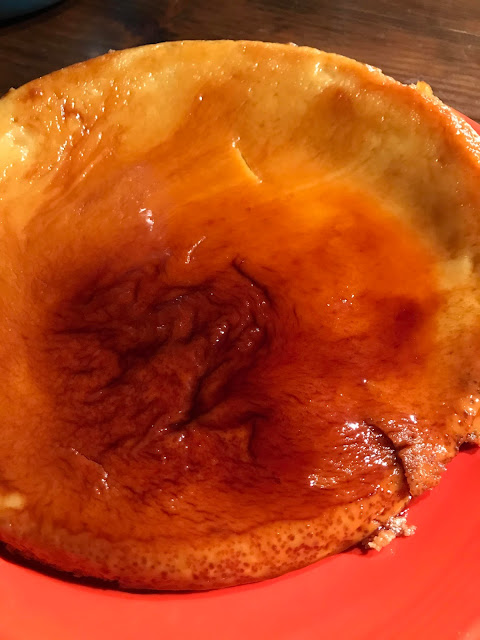 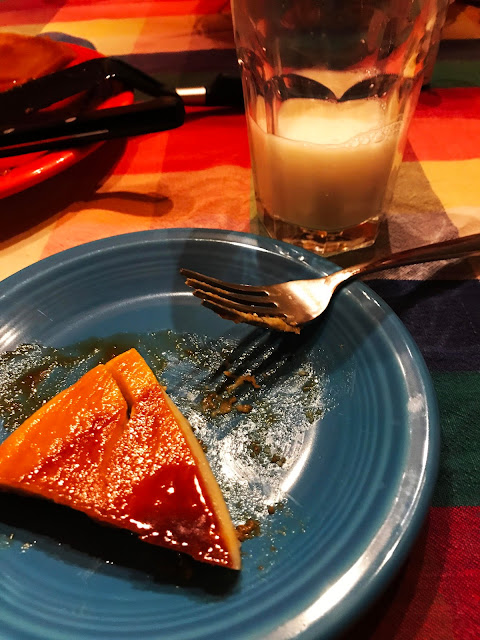 It was so delicious I had 2 pieces. The hubby did too.  I usually drink either milk or water with my meal, and Sunday it was milk as you can see here.
Thanks Elizabeth for sharing your recipe with me. I will definitely be making another flan.
So what have you been drinking late?  Stop by Bleubeard and Elizabeth's blog  to not only see what the T gang has been up to, but also to join in and share your drink (and food if you want to include it) post. 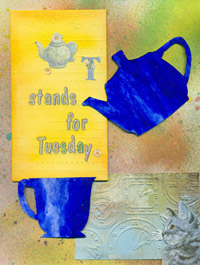 I also thought I would share some pretty photos from my Sunday morning walk with you. It's a good thing I took a long walk that morning since I had 2 pieces of flan. :) 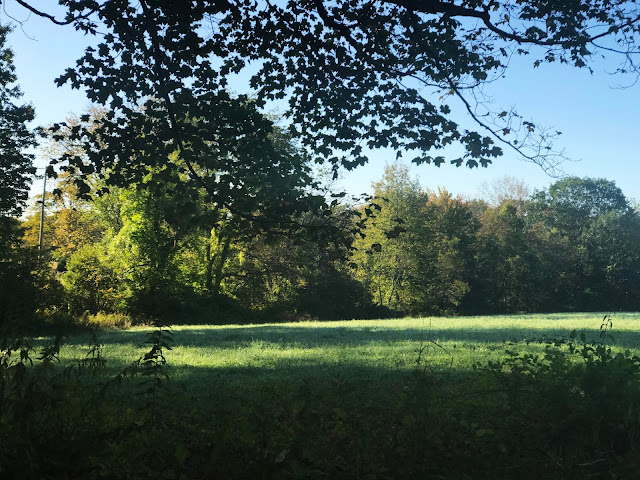 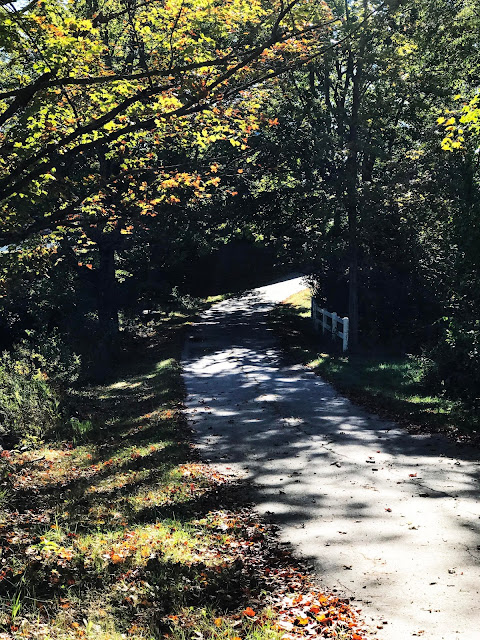 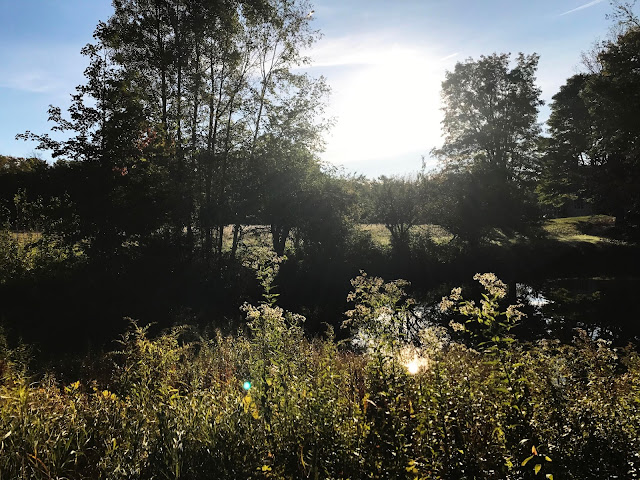 Happy T day everyone. Thanks for visiting my blog.
Posted by My name is Erika. at 5:16 AM

LOVE the look of your baking, so yummy, and that flan i making my mouth water! Glad you had some fun me time in the kitchen. I would be prepared to take a long walk, too, if it meant 2 pieces of flan! Lovely photos of your walk, too. Have a happy T Day, hugs, Valerie

Wow, you are an amazing baker and I adore that fall mini muffin pan with the pumpkin, apple and turkey shapes - I'd like one of each please ...lol 😉. That flan looks so silky and delicious, yum! I remember having flan in New Mexico when we were on holiday/vacation there and it was amazing, I've never had one with a caramelized top though and it must have been super delicious if you had two pieces! We have something similar over here called Crème Caramel which I love too, although it's not as rich and creamy as flan so is a distant second in comparison ...lol 😀. Thanks for sharing all those baked treats and your beautiful walk! Happy T Day! J 😊

Your mini muffins and the flan both look superb! I just baked a apple pie and had two slices as well after lunch - I think I should take a long walk as well now, but however, fortunately it rains dogs outside - so no walking- hihi!
Happy T-Day - your area is just beautiful - I always love to see your part of the world!

Muffins in cute Fall shapes. I just have a plain, old muffin pan. The flan looks delicious and very Fall looking on your blue plate. I've never made flan either. Lovely walk with Fall just peeking through. Have a good day!

This looks SO good. I was going to bake today but it's supposed to be 83, so maybe I'll just grate zucchini today and bake tomorrow when it's cooler. I love the idea of the mini-muffin pan and the flan looks to die for! I think I want to eat at your house!

I can just about smell those delicious scents of autumn here. Your muffins look wonderful with their special shapes. Good idea to use the lemon yogurt in place of the sour cream. Your flan came out beautifully. It's been a very long time since I made one...and a lovely walk afterwards is worth every bite isn't it? Happy T day!

WOW, those muffins look fabulous, partly, I'm sure because of the visual aspect. You are a real baker if you buy specialty pans. I think that's fabulous.

So glad you made the flan. It looks really good to me. I usually have a lot more liquid and have never had mine stick, but maybe I'm a bit more impatient than you. Thanks for making this and thanks for sharing it with the T gang this week. I was quite impressed. Thanks, too for adding your mini-muffins, you lovely autumn inspired photos, and your milk with us for T this Tuesday. Yes, milk was the perfect addition to the very sweet, sticky flan.

Delicious baking, the cakes look yummy and I would have loved to taste that super desert flan.
The photos from your walk looked lovely, you live in a beautiful area of countryside.
happy T day wishes
Yvonne xx

I love baking too and am currently following some hairy biker dieter recipes..had a go at making meringues today but didnt realise how long you have to cook them 2 hours in the oven but turned out nice though so will have them for tea later

Well that flan looks pretty good to me... I've never had flan either...The cooler Fall weather makes me want to bake too.. I have to remember to have more sugar and flour in the house... note to self... lol Happy happy T day! Hugs! deb

Looks like you had a yummy start into autumn! happy t-day:)

The mini-muffins look tasty. I've never had flan or even seen it listed on a menu. Looks like I'm missing out :) What a lovely place to walk! Happy T Tuesday

Your collection of baked good looks amazing! As well as your flan. I have never made a flan but it sounds fancy and so then it must be complicated to make. At least that is my train of thought. What an interesting idea to add gummies to your baked goods. My children would love gummies in their bread/muffins, for one can never have enough gummies. I am a gummy addict.
Happy Tea Day,
Kate

Your autumn muffin pan is really neat, Erika. The flan tasted good; that's what really matters, right? You got some lovely photos as you walked off the calories. The dappled tree shadows one is outstanding!

Delicious looking muffins and Flan! I get the urge to bake when the weather turns cool also...I've made soup and muffins this week, and today homemade applesauce. The views on your walk are very lovely...would join you if I could ;) happy T day!

Great food. Great walk. I will take a muffin as I go out the door on my own walk and have some of the flan when I return. Ok?