T Stands for a Walk in the Park

I was thrilled  because my ATC for the T Day swap arrived from across the pond today.  I received mine from Chris, who you might know as Pearshapedcrafting. Here's the wonderful  ATC she made. 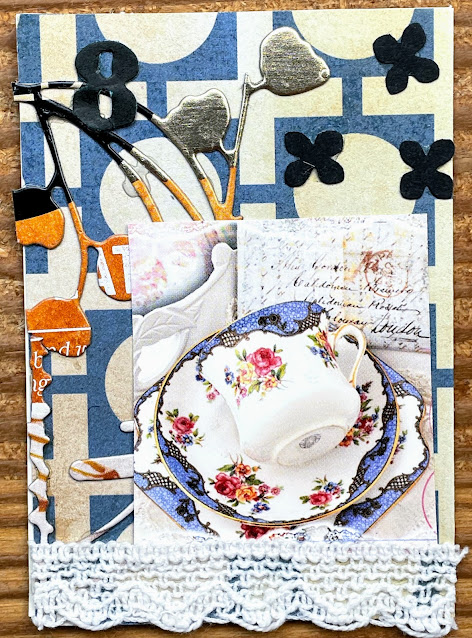 It's a proper British Tea.
And Chris also included this fun envelope. 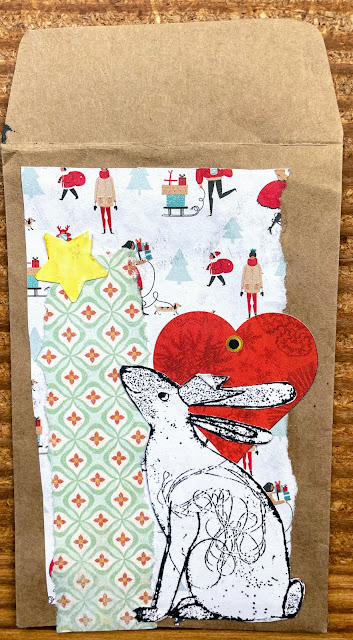 And a few other bits and pieces were included. I love this happy mail. Thanks so much Chris. I'm so glad it arrived today so I could include it here for T. 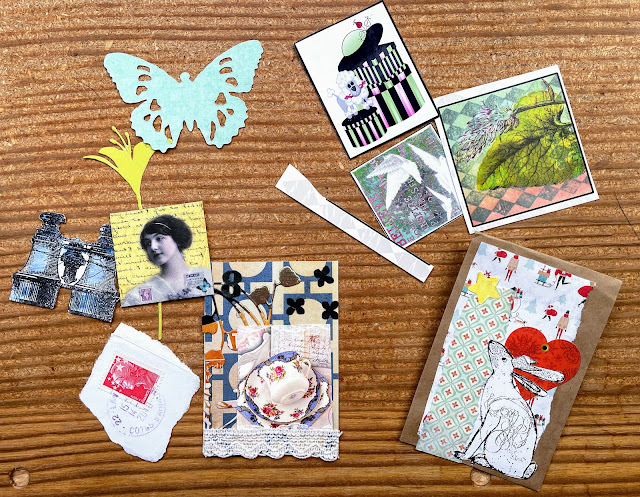 July has been very wet here in New Hampshire, and last week we had a couple of actual sunny days with no rain. Hurrah. We actually broke the record for the wettest July since they started recording the weather, and it has been the 4th wettest of any month on record (since they started collecting weather data too.) Anyhow, since it was a nice day my walking friend and I headed out to check out to a new walking place.

We went to Stratham Park in Stratham, New Hampshire. I'd driven by it for years and just thought it was a town park with some sports fields and an area for events, but I learned it has miles of walking trails up behind that area. Except for one area where Stratham Hill is, most of the trails are relatively flat too.

And even better, no charges for parking too. 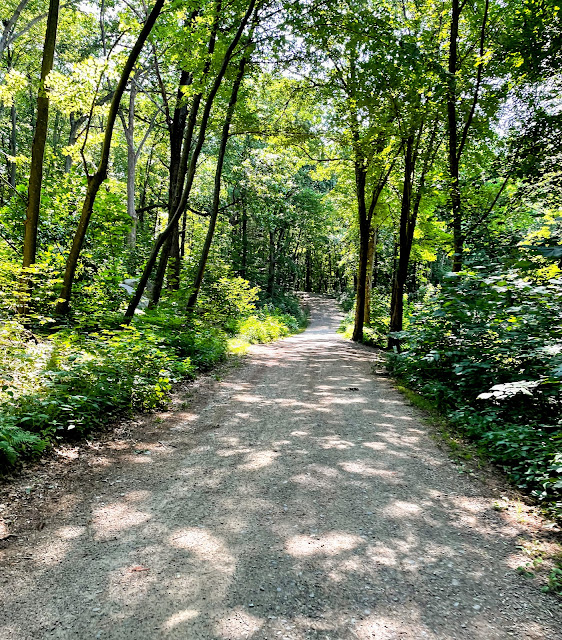 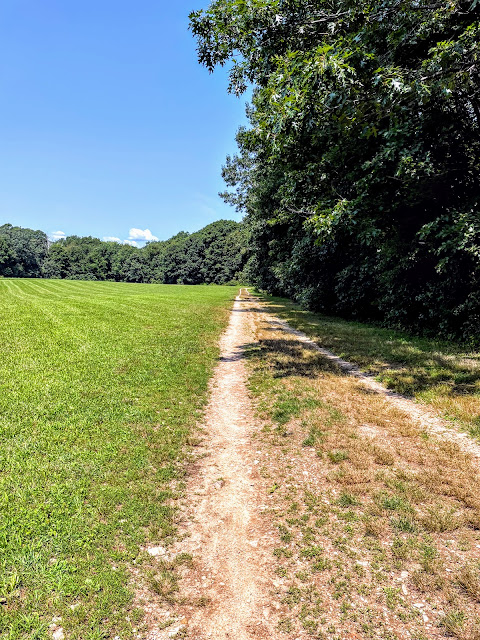 My only complaint is that even though you can pick up a trail map, most of the trails are poorly marked, and we had a hard time figuring out which trail we were actually on. Luckily they all loop around back to the parking lot. 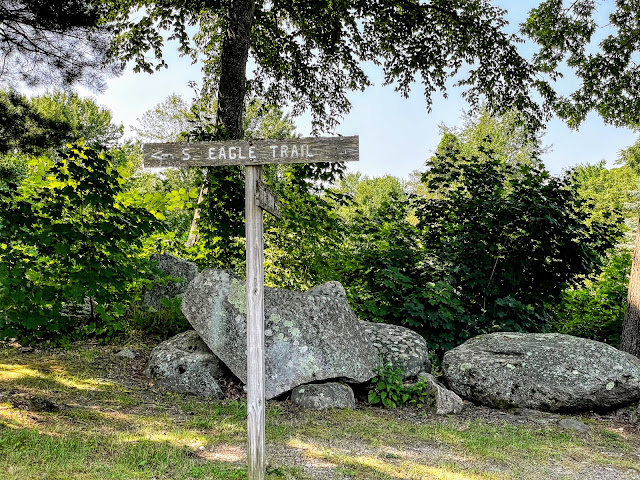 On Stratham Hill there was this fire tower. 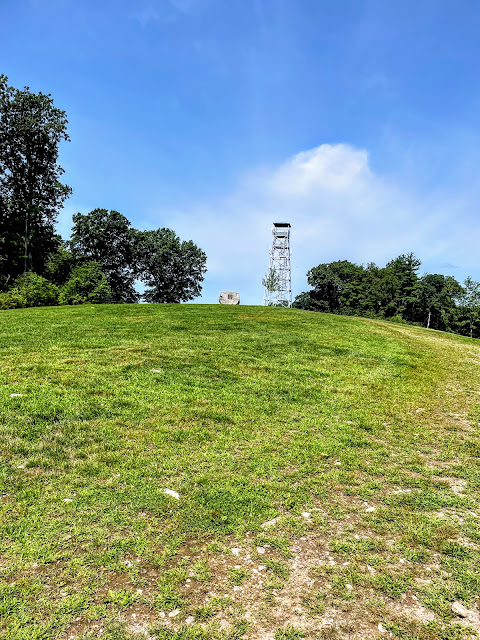 You could climb all the way up this fire tower, which doesn't look very tall here.  It was tall however. I'm not a big fan of heights that aren't enclosed, so I went up just a few levels. The view was good from there, so I bet it was fantastic from the top. 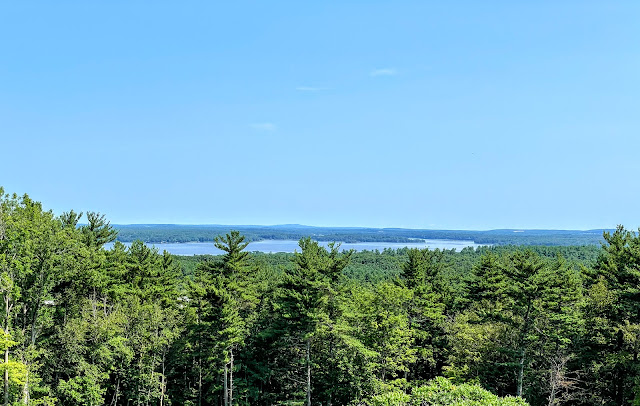 This cool metal marker with directions and distances was on a pedestal near the fire tower. It said 1881 on the pedestal it sat on, which I believe is probably when this was put up originally, just from what some of the names were.   I like how it also lists the elevations of other hills and mountains. 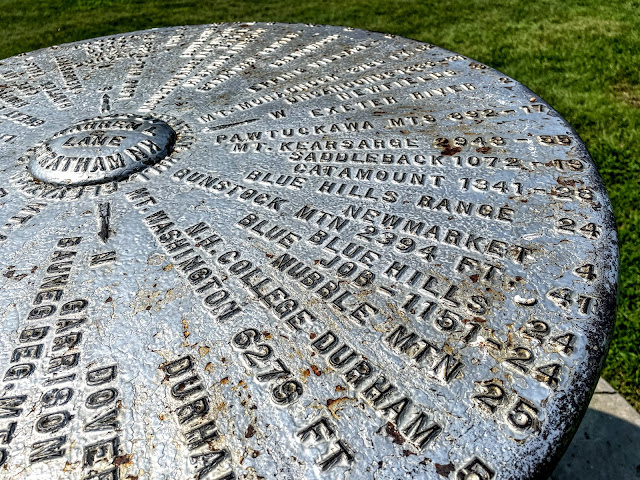 And there was also a historical marker  along one trail that was interesting. 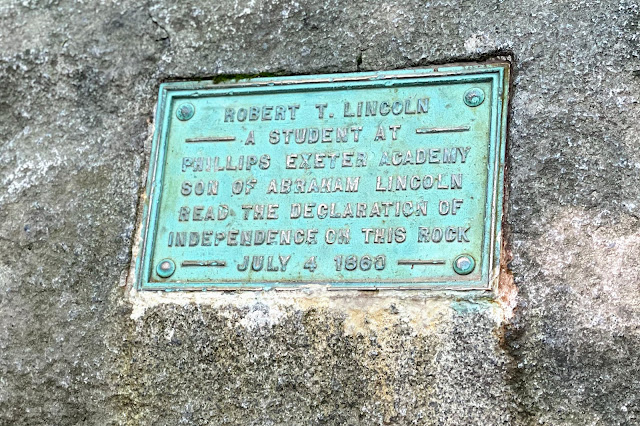 And finally I was excited to see these Indian Pipes. They are white plants that are parasitic, and the pipe bowl at the top is the part of the flower. I don't see these very often, but my Dad always use to point them out, so it was a nice way to think about him. 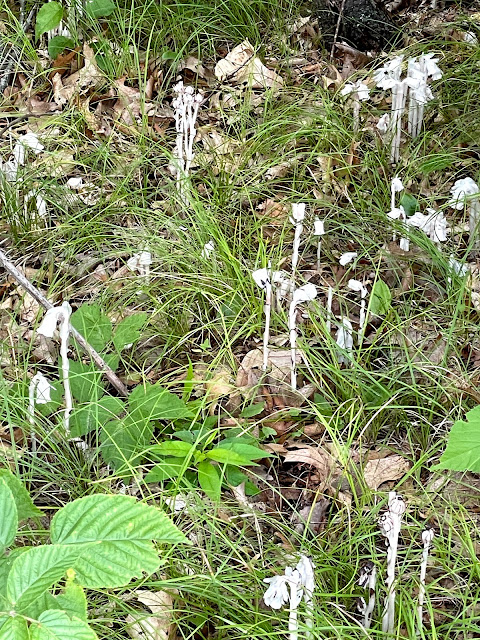 When we finished our walk it was after noon, and we were both hungry, so we headed into Portsmouth to go get some lunch. I had a salad which I wolfed down but forgot to photograph.
And with my salad I had a beer.  This is my ticket to T this week. Don't forget to visit the T  gang ladies at
Bleubeard and Elizabeth's blog.
I liked the label on this can too. 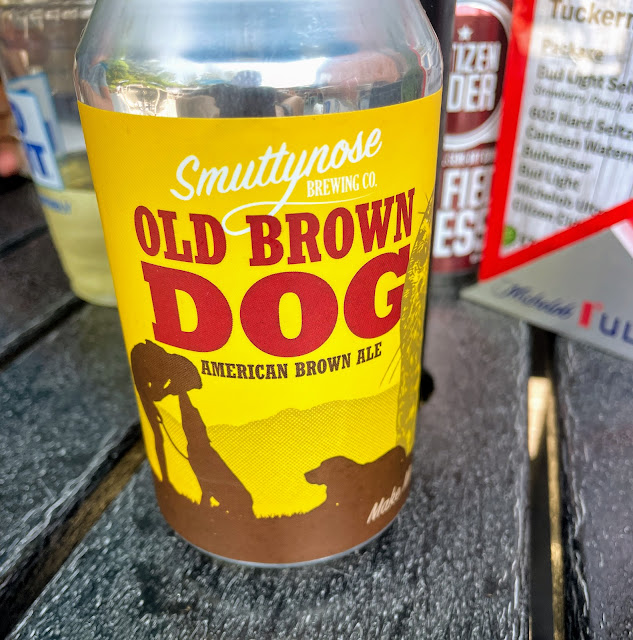 I love the brown dogs at the bottom.They wrapped right around the label. 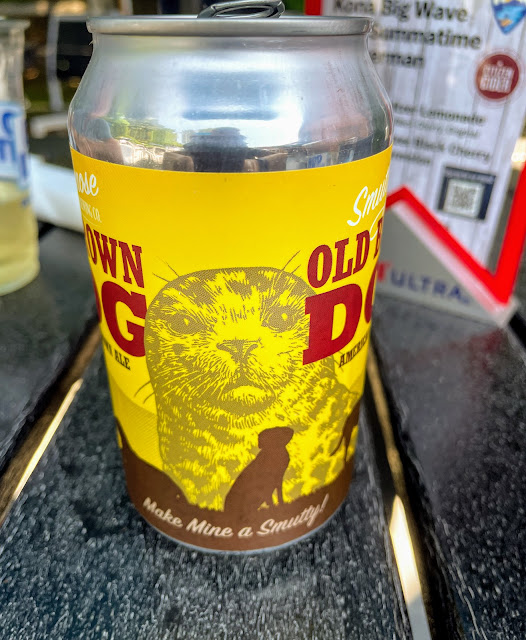 The seal behind the dog on this label is a symbol of this local brewing company. It is named after one of the Islands at the Isles of Shoals that I showed you last week. 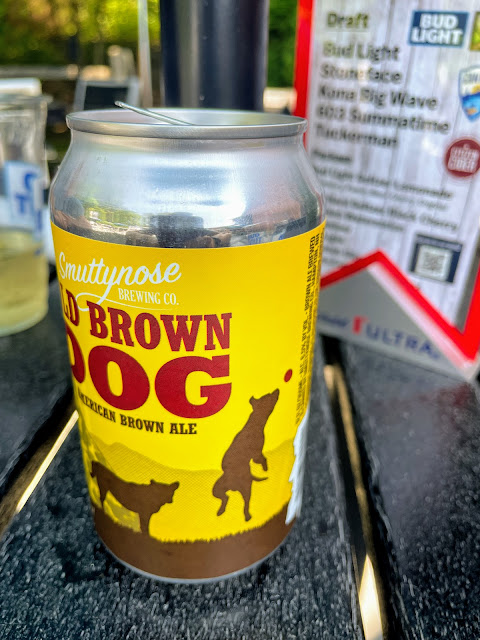 beautiful ATC from Chris!! And I'm sure you'll put those goodies to good use in your art. I'd feel a little funny about so much height too but what a beautiful view you had even partway up to the top. And I love the old metal marker with the directions. the beer can art is always fun to see.

Wanted to tell you- my son was in a wedding this past weekend so he and our daughter in law drove to NH Friday. The wedding was at Zorvino Vineyards and the few photos they sent us so far are beautiful- grounds and venue!! Wasn't sure if you ever heard of it or if it's anywhere in your area:)

Hi Erika, awesome atc and fun mail from Chris. I am enjoying seeing everyone's atc's
I really liked that marker you found on the trail. one of the first years after retirement back in 2003 when I was younger-smiles-I had the opportunity to walk up a very high wooden fire tower at a conservation site-was very cool-I don't think I would have the stamina to do that now. especially in this heat.
That's allot of rain to get in one month. I have never seen those white flowers before-pretty cool.
So nice to have a walking partner to explore new places. the chipmunks and little grey squirrels are eating all of my tomatoes again this year-so I don't think I will try to grow any veggies here. last year they ate all of my lettuce too-craziness haha
Happy T wishes hugs Kathy

A wonderful parcel of goodies from Chris, I love her beautiful ATC!
Great photos Erika. Looks like a lovely day out.
Happy T-Day.
Alison

Beautiful happy mail and wow, what a walk!
I love that beer, so "cute"! Hope it was better than mine.
Happy T-day to you!

That really looks like a fun adventure! You have some good and historically interesting trails. I have never seen those Indian pipes before, I don't think they grow here. Love the ATC you got from Chris, so pretty, and a nice envelope and goodies, too. Happy T day, hugs, Valerie

Hi Erika, your walk looks such a lovely place, great views if you dare climb!
I like the metal marker, makes me smile when I see English names, Durham, Portsmouth, our son lived in Boston for a while, we used to go on the T or is that the Bart, I always get them mixed up, and we saw Braintree where our other son lived.
A lovely ATC from Chris too.
Happy T Day
Jan

How great you got your ATC from Chris. Her post office must be better than most, because she is the only Intl player I sent to who has received my ATC, too. You got to experience proper British tea (grin).

That was a nice walking trail and I enjoyed the marker. I saw Durham on the marker, and Dover, too. It would have been fun to see it all and put it in perspective. Nice sign on the rock about Lincoln, too. I've seen those pipe bowls on another blog, but it was years ago and I forget whose blog it was showed them. They are fascinating.

Your Old Brown Dog ale is cute. I also like the dogs at the bottom. Nice drink for T, too.

Thanks for sharing your ATC from Chris, your hiking trail, and your ale with us for T this Tuesday. And thank you again for your lovely hug in a mug you sent me, too dear.

Such a beautiful ATC and crafting goodies - perfect! I enjoyed walking with you today and seeing those Indian Pipes, not heard or seen or them before 😁. Thanks for sharing the happy memories and that Smuttynose beer looks fabulous, I've had that brand before - yum, yum! Happy T Day wishes! Hugs, Jo x

Great ATC from Chris - lucky you! Fun little goodies too. Happy mail for sure.

Love your walk pictures - how fun to make this new discovery. The plaque on Lincoln's son reading the DOI is amazing. What a treasure. I am super impressed you climbed up a few levels on the fire tower too!

Fun beer - I know I would like it and I love the can!

I love happy mail. Chris sent you a bunch of goodies and a cute ATC. Have a beautiful day with lots of sun hopefully.

That was a fab find! What a lovely park! It look fairly flat too. Easy walking.
I like the plaque with all those English names (in the US of course, but I know the original towns in Britain)
The beer can made me smile. Is Smuttynose the name of the island? Or is the island named after the seals?
Happy T-Day,
Hugs,
Lisca

Hi Erika- did not get your comment about the vineyard...

It's wonderful that this park has included such inviting walking trails in its footprint. I've never seen an Indian Pipe plant. They look interesting. The whole outing does sound like an adventure. Fun!

Gorgeous ATC and all the goodies, too. Looks like a nice trail and the view is spectacular. I haven’t seen Indian pipes in decades. What a nice memory of your dad. Happy T Day

What a beautiful ATC. Just lovely photos too. Have a great day today.

Chris sent you a lovely ATC. And it is so fun to get goodies, isn't it? Oh, what a fantastic walk area you have discovered. I would love to walk there with you. :) Happy T Day.

Sounds like you had a great day hiking. I have never seen or heard of Indian Pipes but they do look like pipes. Now I am going to have to read about them. I bet you were hungry after such a walk. I too would have been too interested in eating to stop and photograph my meal.
Love your pretty ATC and envelope from Chris!
Happy Belated Tea Day,
Kate

What a fun excursion and walk! Odd about the trail markers, but I guess all roads lead! The Indian Pipes are interesting - -I've never seen those. And I really loved that marker with the distances!

Fabulous ATC from Chris, I had two arrive t oday (wednesday) and am hoping the others will be here by next week!Lovely photo's Have a great week Happy T day
((Lyn)