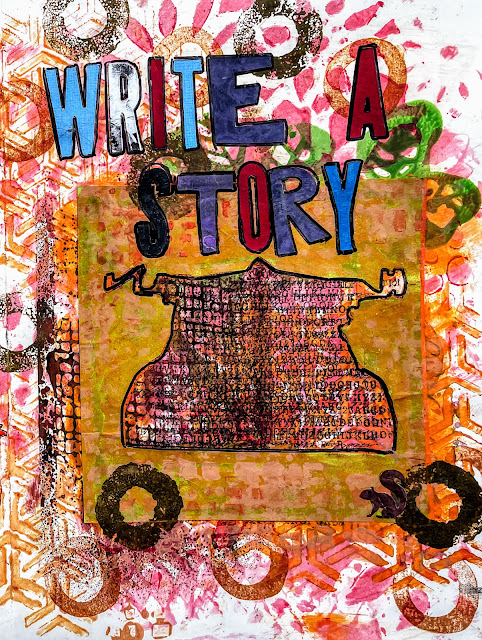 Happy weekend everyone!
Yesterday I showed you a page with many die cut typewriters on it. I die cut those typewriters out of some colorful origami paper. Today's page uses one of the left over pieces with the empty typewriter space. Type is the challenge this month at Art Journal Journey, hosted by the lovely Neet.
Today's page is just a big old mess of color and stencils. I don't know, but I don't think my muse is feeling actual typewriters. Let me show you this page anyhow.
My background is a page that came out of one of my old Dylusion's journals. Somehow it loosened itself from the binding.  It had lots of colorful stencil designs on it, but it never got finished after that.I think I must have gotten some new stencils and was trying them out, but I can honestly say I don't remember making the background.
I used an alphabet  stamp in the "blank" space in the typewriter shape on the origami paper square.  You can see I outlined the typewriter with a black Sharpie. I overlapped the alphabet stamp several times and left just a hint of the letters because I thought the overlapped  effect was interesting.  Plus if you are writing a story of any length, you would need to retype individual  letters multiple times. 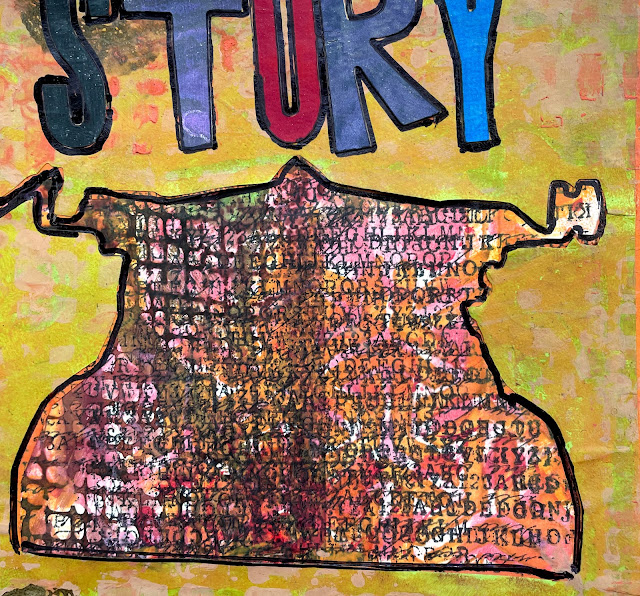 I did stencil a a little bit on my origami paper in the hopes it would fade into the background and only the typewriter would stand out.
I also used a piece of round foam pipe insulation to stamp the dark brown circles on my spread. The lighter brown foam circles were already on the spread.  The type letters are some assorted left over die cuts. The little squirrel is also a left over die cut. I thought he looked cute on the corner, and maybe he's even the star of the story that's being written.
I also want to share photos today from one last piece at Art Omi.  This was a special exhibit that was  inside the main building. It's pretty impressive when you read what she did. 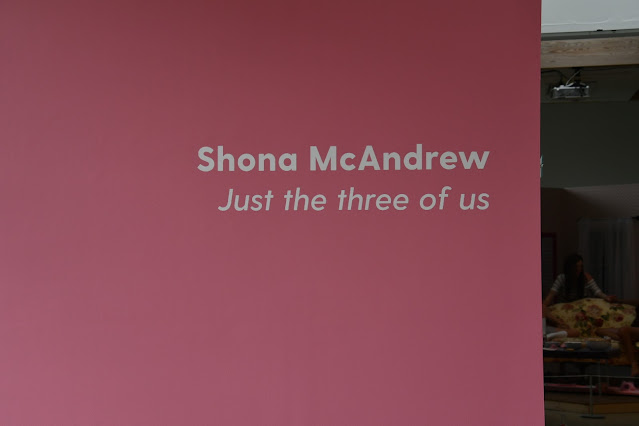 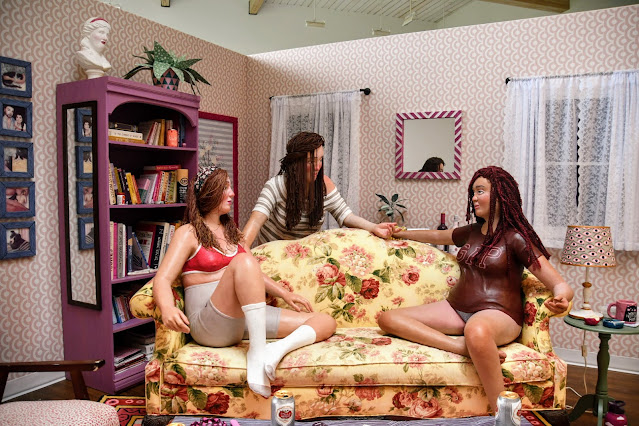 Here's what the Art Omi website says about it.

At Art Omi, McAndrew exhibits a sculptural installation. The installation portrays a group of friends sharing time together in a living room consisting of over 170 individual papier mache objects, all handmade by the artist.

For this exhibition, McAndrew draws from recollections of time spent among her high school best friends. The artist renders her friends as she remembers them at that time: casual, intimate, and out of view of the male gaze. Rather than portraying women and girls in their rooms as preparing themselves to exist for men or in the public sphere, McAndrew seeks instead to illuminate the messy yet harmonious space created by women left entirely to themselves. This tableau draws from the artist’s life and personal objects and includes renderings of snacks, spare change, melting ice cream, books, and magazines.

As has been explored elsewhere by McAndrew, Just the three of us references Classical representations of women found throughout Western art. By portraying three comely young women, McAndrew alludes to the Three Graces (or Charities), placing before them a bowl brimming with fresh fruit. Elsewhere, a de-idealized Greek bust features a double chin and rounded cheeks.

Continuing the themes of her past work, this new installation considers social constructions of the female body. McAndrew’s representations portray women secure in their identities, bodies, and environments. Reflective of her own experience as a plus-size woman, McAndrew confronts the viewer with depictions of women’s private inner moments, willfully subverting norms governing female beauty and behavior. 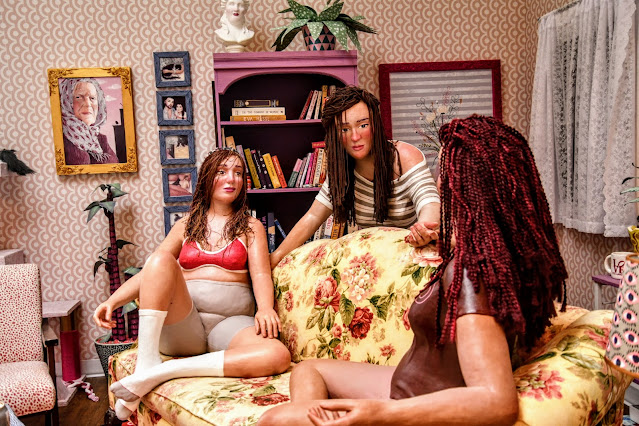 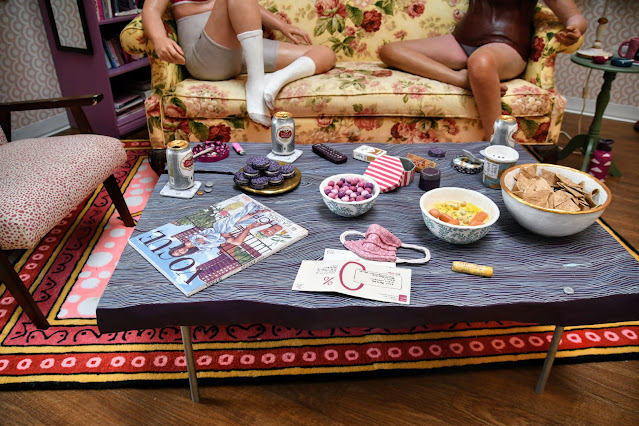 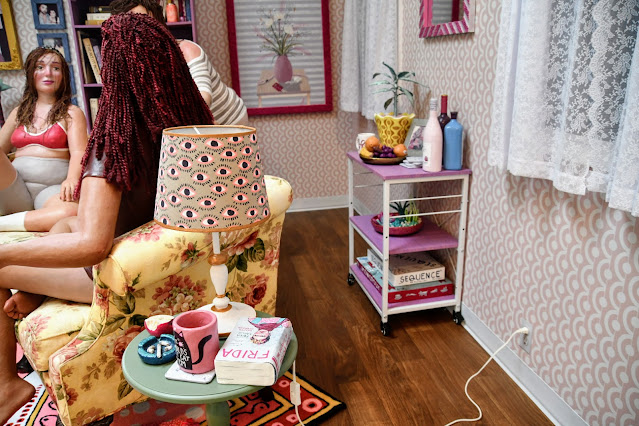 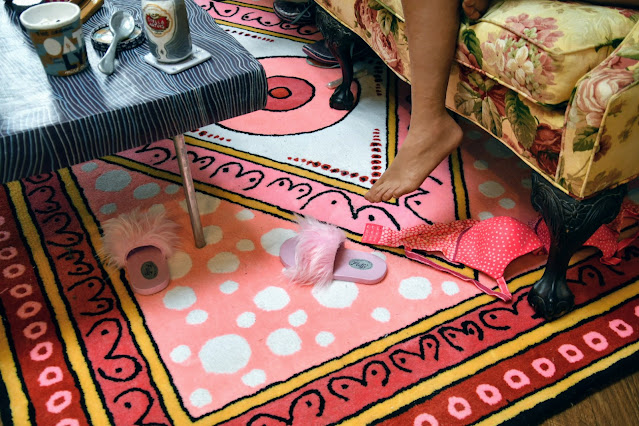 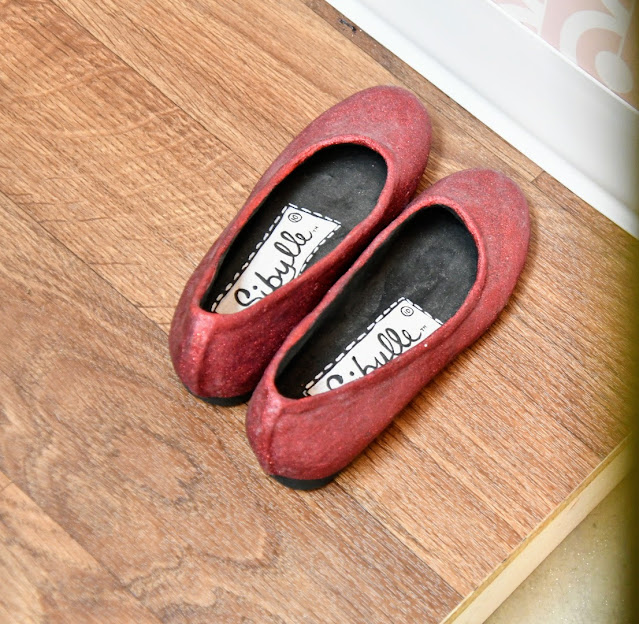 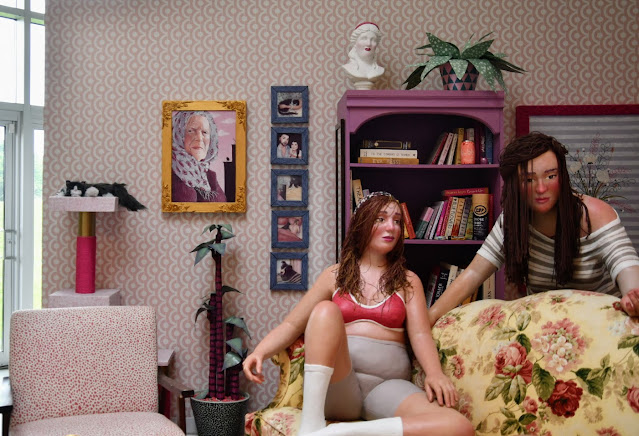 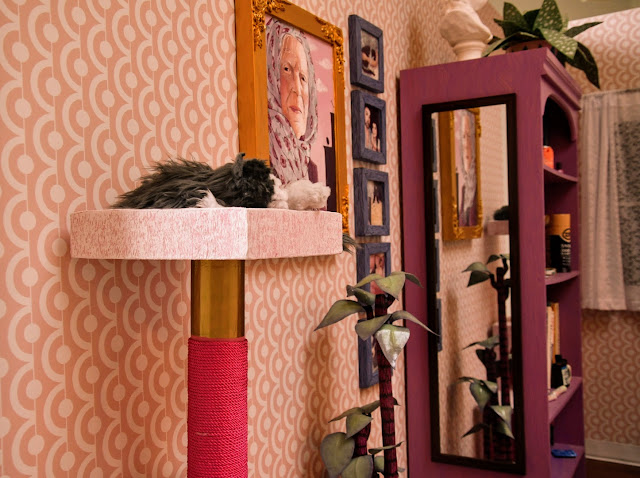 I wonder what story these 3 friends are sharing.
Hope you enjoyed today's post and all the photos from Art Omi this past week.
Enjoy the rest of your weekend.
Posted by My name is Erika. at 5:33 AM

Thanks for joining in again with my theme at Art Journal Journey. A lovely page with a very interesting typewriter on it. I do like how you used those letters all over it - must have taken a while to do. At first glance it looked like knitting to me, the first page is smallish, and then I realised it was composed of letters. (I do have an optician appointment in 3 weeks, well overdue due to the pandemic).
I like how you have used colour and stencils plus some stamping, especially the foam pipe stamped circles. The colours are so rich and warm looking. The lettering is bright and bold looking perfect for this page outlined in black.
Love the art installation by Shona McAndrew. Something that yu can stare at for a long time and still find something new. Amusing and so true to life with the younger generation - or me when I was that age I guess, although I think I sat a bit more ladylike than this in those days.
Thanks for a great blog post
Hugs, Neet xx

You may not be feeling the love for the typewriter, but you sure felt a lot of love for the various stencils you used. I think that is pretty awesome. Thanks for yet another great entry at AJJ using Neet's theme, dear friend.

OMGosh, that papier mache installation is out of this world. There are SO many details and I was engrossed in taking them all in. Something you don't see much of these days is women smoking cigarettes. Thanks for all the different views from this installation. I love, love, love it, Erika.

I love this riot of colours and type, just fantastic. And the installation at Art Omi is a BIG wow! And it's good that the women haven't been portrayed overly skinny and model like! I would love to see it! Thanks for sharing! Hugs, Valerie

Great your journal page to type! the art installation by Shona McAndrew is great and interesting. That is the real life!
Have a good weekend, hugs, Elke

I love your page Erika, the background and stencilled words are fabulous.
And that art installation is fantastic, so much to look at, and interesting to read about it too.
Hope you're having a good weekend,
Alison

I like your page, it's nice and colourful.
Hope your weekend is a good one, and a cooler one!

I do like your work but that scene steals the show! The socket even, the artist thought of plain everything!!
And you know what? I sit here in my PJs!!! How fitting.

Awesome page and lettering. You have made a big job with it. Well done!
Thanks for sharing a very interesting exhibition tour.
Happy weekend my friend xx

I would have gone to Art Omi just to see that installation. It's fascinating and incredibly well executed!

I love your journal page and can imagine the story that could be wanting to escape from the page. Fantastic inspiration for Neet's AJJ theme.
The exhibition photos looked amazing, I would never have guessed that the scene included so many papier mache objects.
Stay safe.
Yvonne xx

First, I really enjoyed your page - very cool to have all that type inside the typewriter. So fun!!!

That exhibit is amazing - what a talented artist. I looked at it a lot and my eyes kept going to that portrait of the unhappy older woman - wonder what the story is there? LOL. The details are truly amazing! TFS!!!