T Stands for End of January This and That

Hi everyone. I am writing and posting this Monday night for this week's T day over at Bleubeard's and Elizabeth's blog.

I thought January went very fast until I realized that January 1, New Year's Day, seems like a very long time ago.  I am ready for spring, but I am happy it is almost/or is (depending on when you read this) February as that means we are slowly getting closer to better weather. If we're lucky March will be mostly snow free and mild.  I'm hoping for that at least.

Like many of you in the northeast, this past weekend we had a big snowstorm on Saturday. Here's some Sunday morning views out my kitchen window and then out the living room window when the dogs went outside. 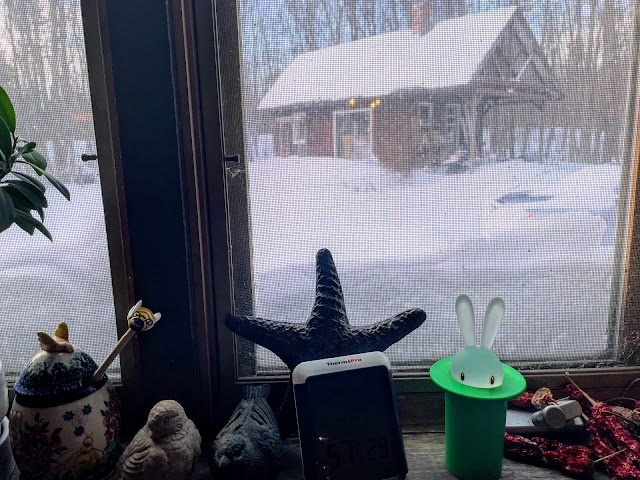 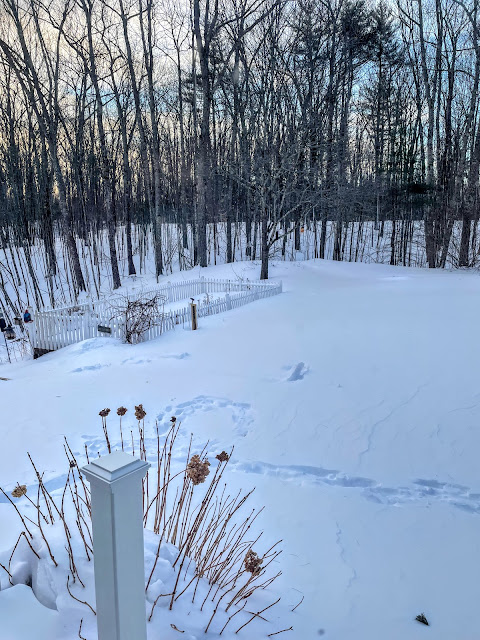 It was cold so the snow was light and powdery, but with the wind it drifted. It was still a pain in the you know where to shovel, especially where the dogs tramped it down. 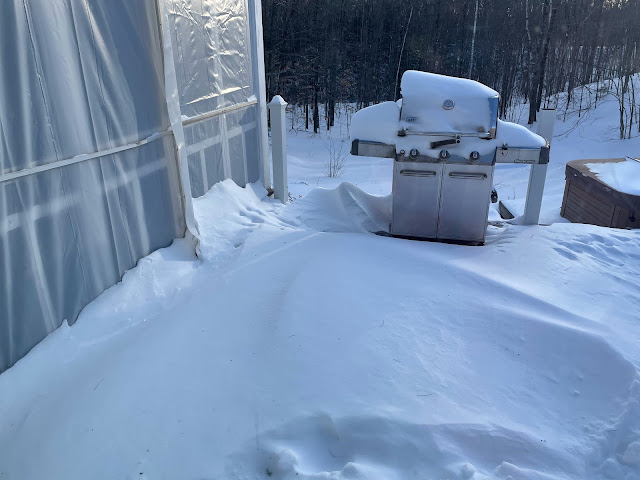 That makes it hard to tell how much snow we actually had. Whether we had 9 or 10 inches, with drifts over a foot, it was more than enough, especially with the next storm on the weather horizon.  (This photo of my deck looks deceiving -like there isn't much). I know the coast of NH and down in Eastern  Massachusetts had a lot more snow. 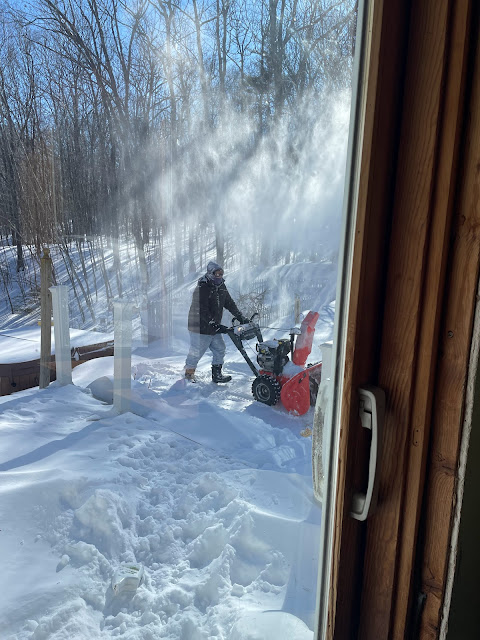 I did a bit of baking this past week also. I made this Basque Cheesecake (Tarta de Queso).  The recipe comes from the King Arthur Flour website (Basque Cheesecake recipe), and it was very easy to make. It had no crust, and all the ingredients get put into a food processor, mixed until smooth, and then poured into a parchment paper lined pan. 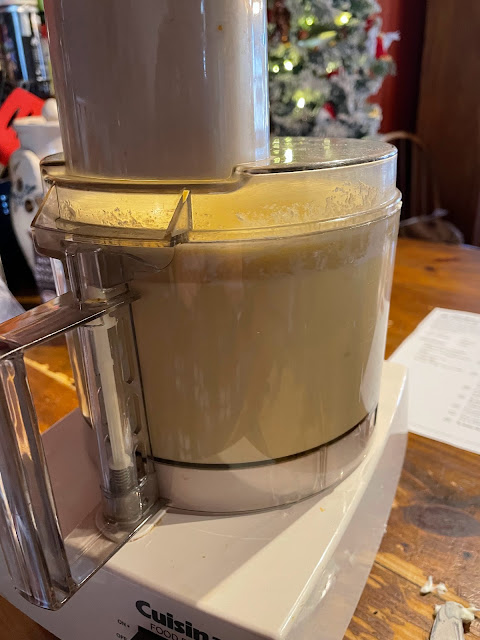 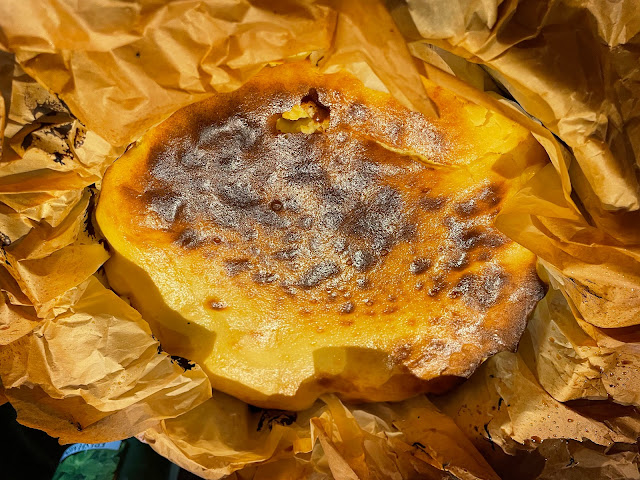 It's baked at a high temperature for a shorter period of time, which browns the top ( and makes it a little like a crust) but leaves the inside really creamy. 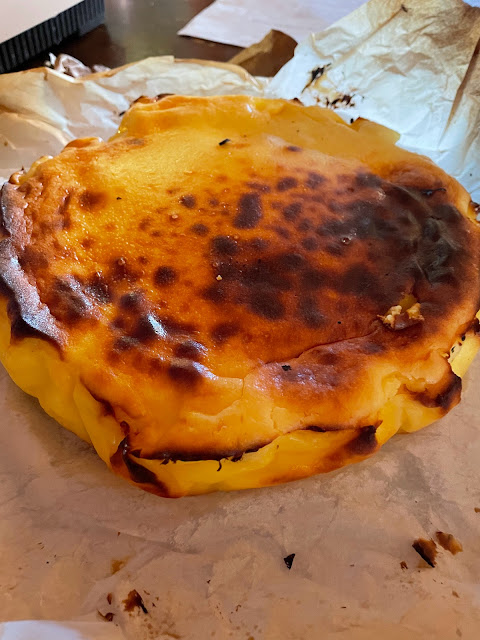 That browning also gives it a pretty but rustic look. This was the yummiest cheesecake as it was much lighter than traditional cheesecake but still quite tasty.  Nothing tasted burnt. I recommend giving it a try sometime if you're a fan of cheesecakes.
The other thing I did twice last week was head down to the beach to walk a couple of days. The beach is  one of the few places you can walk easily at low tide during the winter when other places are snow covered or icy, but it is also a bit of a pain (for me) as it means driving an hour each way to get there. The drive is worth it though when it's not too cold or too windy.
One of my beach walks was at York Beach in York, Maine. York has a couple of beaches, and I walked Long Sands (to answer your question CJ).   Back in my 20's, I lived for a couple of off seasons in York. I loved being near the beach and being able to walk it on a regular basis, and that's one reason I enjoy going back there.
After the beach I took a drive over to Nubble Light. 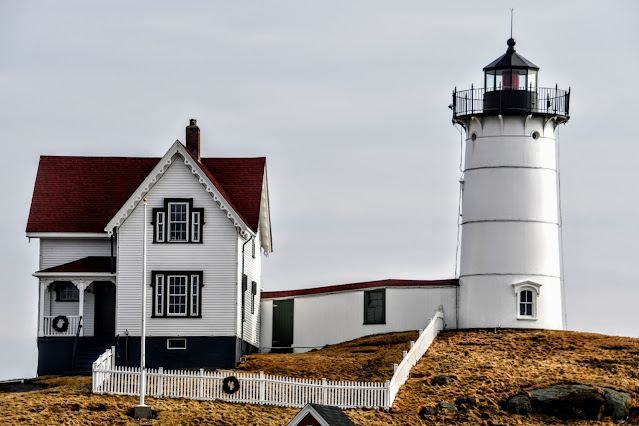 Nubble Light is not only picturesque, but is on this island just off the shore. 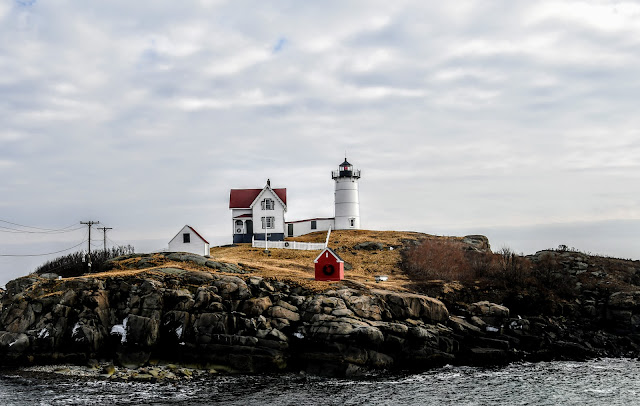 Here's a little info about Nubble Light from Wikipedia:

The Cape Neddick Light is a lighthouse in Cape Neddick, York, Maine.[2][3] In 1874 Congress appropriated $15,000 to build a light station at the "Nubble" and in 1879 construction began. Cape Neddick Light Station was dedicated by the U.S. Lighthouse Service and put into use in 1879. It is still in use today.

Nubble Light is a famous American icon and a classic example of a lighthouse. The Voyager spacecraft, which carries photographs of Earth's most prominent man-made structures and natural features, should it fall into the hands of intelligent extraterrestrials, includes a photo of Nubble Light with images of the Great Wall of
China and the Taj Mahal.[4]
If you want to read the full article, you can here: Nubble Light.
Since it is T day, and since I need to share a drink photo, I will let Maddie do that this week. 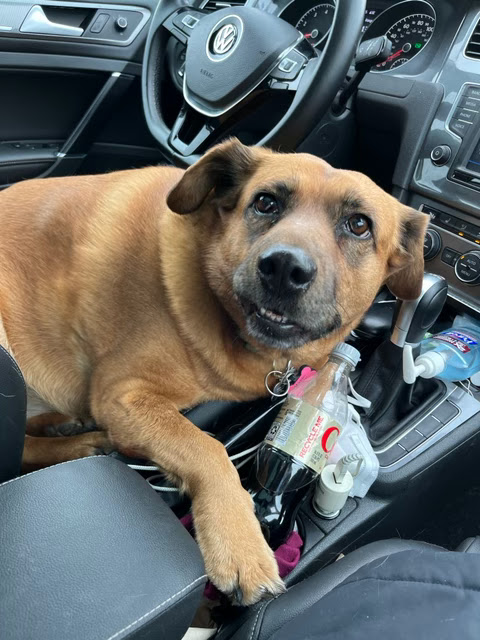 Ha ha. I don't think she'd even drink Diet Coke,  but she looks like I caught her sipping mine.
Thanks for visiting. Have a great T day and week ahead. And Happy February too.

That is a very classic Maine lighthouse. I think we saw one or two similar ones near Bar Harbor last summer. You are lucky to be able to get there so easily. Our drive to the Maine coast is two days long.

That's a lot of snow but I'm glad it wasn't worse- or what I feared you would get. I love lighthouses and Nubble Light is such a pretty looking one. Lucky you to get a beach walk in too!
That cheesecake looks so good - I just may have to make this one-thanks for the link.
Love the pic of Maddie! I can see this as a meme:):):) Happy T day!

Erika, just saw your comment on my blog- tell me if you have a favorite (or a few) Katharine Hepburn movie and I will share those outfits (if they were on exhibit) on my blog next week ;)

You got a lot of snow! We only got a few inches when they called for more.
Your cheesecake looks beautiful!!
What a beautiful lighthouse. I really loved seeing the pictures and reading a little about it.
Happy Tea Day,
Kate

At least from the outside that cheesecake looks like a Swabian cheesecake, only that we don't make it with cream cheese but with Quark (I don't know an English word for this). It looks delicious. I'm usually not much of a baker, but maybe I will try this.
That lighthouse in Maine looks familiar, I probably saw pictures of it. I don't think we went there when we were in Maine in 2007. I alwasy love walks on the beach.

You have had quite a bit of snow so far this winter. Your dessert looks delicious. I love baking in the cold months especially. Loved seeing the lighthouse-what a nice place to visit- I have never been able to be up close to a light house-would be neat to visit an older one.
stay warm and Happy T-loved the photo of your dog-great smile

That's quite a bit of snow, isn't that!! I love burnt cheesecake and yours turned out really good, Erika.

You have a snow blower. Lucky you. The weather people are predicting 12+ inches here. And if we don't shovel our walks, the city can fine us. I don't even know where my snow shovel is, much less have boots. I'm SO not prepared for this like you apparently are. The last time we had a big snow, I couldn't even get out my front door. It seemed top accumulate on my porch and door.

Your cheesecake looks delicious. I wish I liked to bake. I'm such a NON baker.

That's a beautiful and charming light house. You are lucky to be so near the water.

Maddie is a great "host" with your diet coke. That's a great photo of her and your drink.

Thanks for sharing your snow, cheesecake, trip to the beach, and Maddie with your drink for T this Tuesday, Erika.

Haha that snow really makes me shiver! Just looking at it.
The Basque cheesecake looks delicious. I have never made that. (Basque country is in the north of Spain, so ttally different cuisine to Andalucia).
What a beautiful light house. Picture postcard if ever there was one!
Great photo of your dog 'drinking'your coke, lol.
Happy T-Day,
Hugs,
Lisca

Good to see Maddie guarding your cola! You really did get a lot of snow, it looks very cold. Your cheese cake looks fantastic, must try it when I am home again. Happy new month, hugs, Valerie

What beautiful snow scenes! We're nowhere near a beach. Driving an hour to get to one would be a nice change, but still it's not what I'd consider close -especially not in iffy cold weather. I'll stay inside and wait for warmth ;)

Wow that is a lot of snow. It's very exciting to see it but only from a distance, I don't want any. We still have no heating so that would be the last straw lol. Love the cheesecake, it looks delicious, and Maddie is so cute with her "caught out" expression. I'm taking a break from the mess of my house to read some lovely blogs today Happy T Day Elle/EOTC xx

Wow, we heard you had a storm and that looks like a lot of snow! But your yard looks so pretty covered in white 😀. That cheesecake looks so good, my hubby says I need to make it ...lol! So lovely to visit the coast with you too. That's a cute and funny photo of Maddie, her expression looks like she's been up to something, if not drinking your diet coke maybe she's been for a spin in your car as she's in the driver's seat ...lol 😉. Happy T Day! Hugs Jo x

Light and fluffy snow. A pound of feathers still weighs a pound! At least we didn't lose electricity. I thought I recognized Long Sands. Such happy memories. One Summer, my girlfriend and I spent every weekend up there. We would stay at the Anchorage across the street. Drag our lounge chairs over to the beach. Eat lunch/dinner from the clam shack. Sometimes go to Nubble Light and eat at the fancy restaurant there. Maddie looks so cute with the bottle of Coke. Happy T Day

Your place looks like our son's. He lives outside Skowhegan, and they got it dumped on them, too. He sent photos of how he had shoveled out and now snow blower. Elizabeth is right, we are getting up to 12 inches starting tonight. It was 66 just yesterday! Stay warm. Happy T Day

Wow, some great photos! Love the snow, your beach trips and your wonderful dog! Stay warm, Erika! Many hugz and happy T-day!!!!

Oh just way too much snow for me. LOL Great shots of the light house and Mattie is a cutie.

Wow Erika!! How much snow you have got there, Good thing you also have a snow plow. Oops I would love to eat a piece of your cheesecake, it looks sooo good! We make it here too, with Philadelphia cheese, and my niece makes it with strawberries on top.
Maddie is posing like a real professional model, and she looks like she's even smiling, love her ♥
The Nubble Light photo is fantastic. Thanks so much for sharing your beautiful photographs with us.
I wish you a very nice day, and send big hugs
Caty