Hi everyone. Happy middle of the week.

Today I'm joining our hostess and all the ladies over at Kathy's blog (Hummingbird Studio at the Lake) for Food Wednesday .  This week I wanted to share the baking class I took last Friday at King Arthur Flour in Norwich, Vermont. 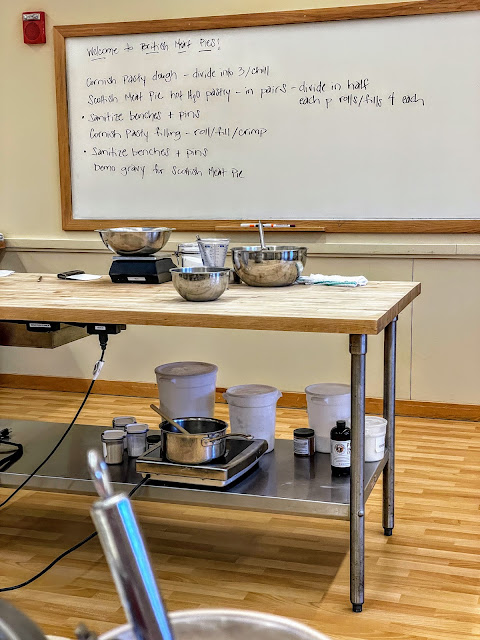 Some of you might remember that I have taken baking classes here before, but it has been awhile. I've done 2 different 4 day long intensive classes in pastry making, and I've also done a one day sourdough class. The class I took last week was British Meat Pies. Ever since seeing British meat pies made on the Great British Baking show and since I never tried them either time I had been in England, I was curious about them.
And I know I could have just played around on my own with a recipe in my own kitchen, but every now and again it is fun to go take a class as well as to learn a few new baking tricks.
Actually meat pies have been on my baking bucket list for awhile. And I even clicked off 2 other baking list want-to-try items: using lard in a crust and  making a hot water pastry crust. Both of those are things I will definitely do again.
I thought I took more photos to share, but I guess I didn't. We were pretty busy for most of this 4 hour class.
At King Arthur Flour, the classes are taught by professionally trained chefs. They are really good at teaching you not only how to make what you are making, but also some basic skills in the way a professional chef would do them. An example of that is how to use a pastry blender to blend butter and other fats into flour mixtures. Here's a pastry blender tool in case you aren't familiar with them. 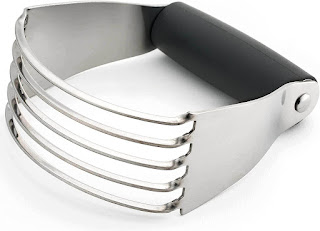 I've used them before, but I've never spun the bowl each time I cut the fat into the flour, which makes it so much easier, faster and really does the trick.
We made 2 different meat pies. First we made spice lamb filled Scottish meat pies. We made 4 mini ones a person. And then we made steak and root veggie filled Cornish Pasties. We ended up with 3 large ones of those.
Our instructor that day first demoed how to make the pasties crust, then we made them and put them in the fridge to chill.  Then she demoed the crust for Scottish meat pies, and we made that crust. This process continued until we had completed our baking. Then we got to sample the items of the day because the instructor shared her baking with us.
The very first photo in (today's post) shows you the instructors work table and the agenda on the white board behind it. There is also a big screen above it so people in the back can see, but it didn't make my photo. 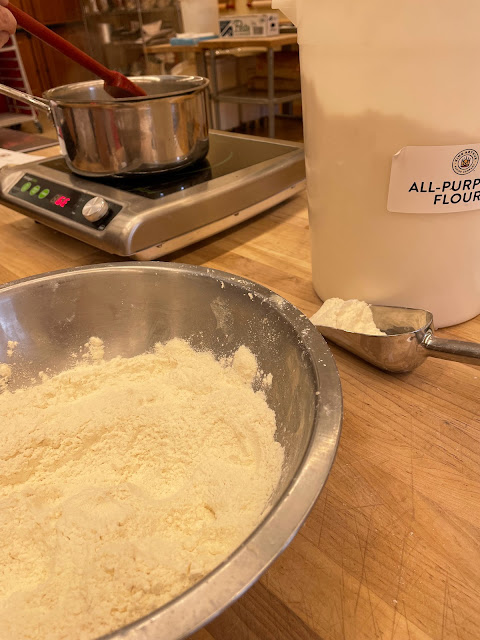 Everyone made their own crusts, but we worked with our table partners to make our meat fillings. My partner ended up being this wonderful lady from Springfield, Massachusetts. As we chatted we found out we were both retired high school biology teachers. How fun was that?
We had so much filling for our pies, that most people seem to overfill theirs just a bit. No soggy bottoms but definitely a bit of a spill over.
Here's my Scottish meat pies. They are filled with spiced ground lamb . We also made a gravy to put over them. I've never added mace to cooking before, but boy did that make the lamb tasty. 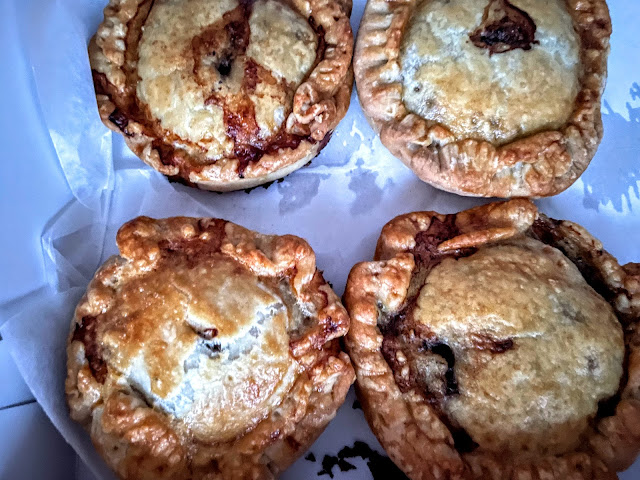 There is a little space to add your beans if you want them. to the top, which I believe is a traditional way to eat them?
And here's my Cornish pasties. I think the top looks weird because they did expand a just bit when we baked them, or else I did  terrible job brushing the beaten egg over them. 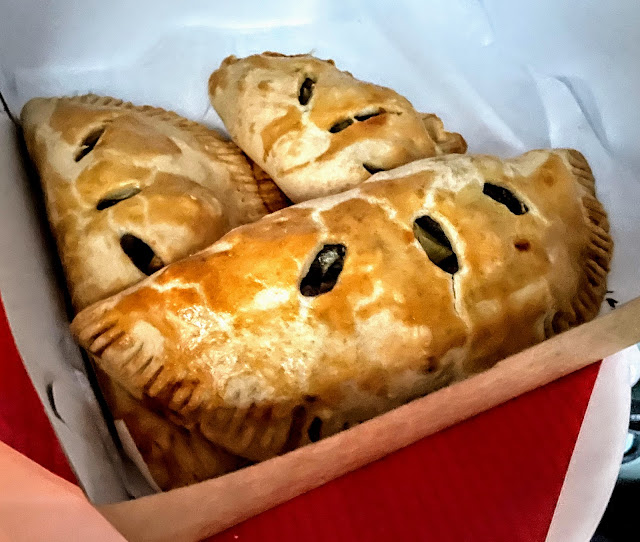 Vermont still has pretty strict covid regulations. In order to take this class I needed proof of vaccinations. Plus masks were required the whole time. I know a lot of people are sick of masks, but I felt a lot better wearing one. 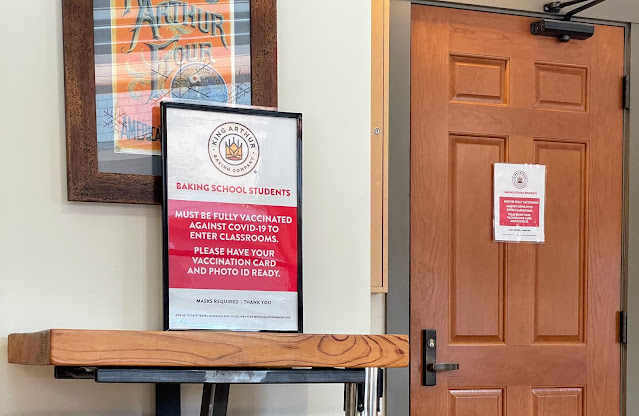 It was a fun day, and I think I need to look for another class I might like to take. I'm not sure when I would do that, but since I haven't taken one since 2019, I definitely want to take one in a shorter period of time than that.

Thanks for visiting, and I hope you enjoyed this synopsis of my day at baking school.

What fun! Your pies look great! There's a cafe/bakery here that makes Cornish pasties that a friend of ours loves! Whenever he comes, he calls and reserves some for himself to take home (he lives a couple hours away).

It's good that everyone wore masks. They are no longer required here, but they are recommended. The new more transmissible variant is spreading. We never stopped using ours--I figure we never know when we are around a vulnerable person and the mask helps to protect them as well as us.

I'm glad you had such a good time!

Oh wow Erika! I haven't been to a cookery lesson forbears - the last one was one hubby and I did on bread making (he is now chief bread maker here!) The pastry blender is one of my favourite gadgets - I even got them for my special needs pupils when I was teaching. You got brilliant results. We are still wearing masks - even though most folk aren't. Hugs, Chrisx

Good morning, I really enjoyed learning about your baking class. Were you able to take your pies home with you?
I have purchased King Arthur flour and other ingredients for as long as I can remember. So I think it is so cool you are close enough to buy from their store in person and also to take classes.
The lamb pie sounds really delicious. I was brought up with using lard to make pie crusts-but my Mom her Mom with farmgirl roots used "real" lard without all the preservatives and over processed. It does make the best pie crust in my opinion.
Thanks so much for sharing on Food Wednesdays Hugs Kathy

What a wonderful and delicious day you had there, glad you learnt some new tricks, too. It all looks so yummy! Hugs, Valerie

Hi Erika! ☺ Wow...you did such a great job on those pies, especially the pasties, they look fabulous! Good for you for taking a class in baking. I'm self-taught but I sure do watch a lot of YT videos to help me with technique. I've never used mace in cooking before either. Delicious post! ☺

That sounds like great fun! And your food looks tempting :)

Looks like a fun day and your bakes are wonderful enough to make you Star Baker!

Thanks for sharing this wonderful class the pies look so good!

This is something I would just LOVE to do. I'm glad they required vaxxing and such. It's a bit easier to relax. The pies look delicious. I never knew the tip about turning the bowl with a pastry blender. I don't often make my own but it would work well with scones and crumbles too, I would think. LOVE meat pies but that would be a first for me. It looks like great fun!

This looks like such fun. Your results are fabulous. Well done indeed. Have a great day.

That sounds like a fun event! Your Scottish meat pies look fantastic with spiced lamb!

Taking a class can be fun... A friend of mine and i took a piano class together.. Neither of us had played before so lots of laughter... Your pies look yummy!!! I will have to keep an eye out for some baking classes... Hugs! deb

I think we are all tired of masks, Erika, but better we wear them than get (or give)COVID. Your pie-making venture seems like a grand success and I am sure that you enjoyed the results. Hugs, David

Baking class at King Arthur is (I suspect) on MANY people's bucket lists! A dream school! And it's really great to learn to make pasties.

Taking a class with Kind Arthur Flour looks like so much fun and I easily believe that you learned a lot. I had Cornish Pastries in England - not only in Cornwall, but there as well - and I remember them as very delicious and filling. Yours look tasty as well as the Scottish lamb pies. You're definitely doing a much better job at baking than I do.

Lucky you. What a great class, even though I would never eat one of those pies. I have a pastry blender, but I don't use it very often. I can tell you are a serious baker and you have some beautiful pies, too.

I came over from the T post when you mentioned baking classes so I had to look. Your pies look good, the Cornish pasties look pretty accurate from what they make and sell here, but I think the pastry is different for the Scotch pies from what we make here, as they are made in a very specific way. I used to love them as a kid but I don't eat meat now so I haven't had one for a while. I should check as they are probably selling vegan versions of them now lol. Sorry for my lateness, struggling with my sprained wrist. Happy belated T Day Elle/EOTC xx