Hi everyone. Today I am joining our lovely hostess Kathy and all the other "foodies" over at Food Wednesday.

The past week there was not a lot of inspiring food made or eaten in my life, but I have been watching some old reruns of Julia Child's French Chef cooking show on one of the PBS channels we get. I'd never seen these except in little segments within another show. I have to say I've learned a few tips and did have some smiles too. They are very entertaining. 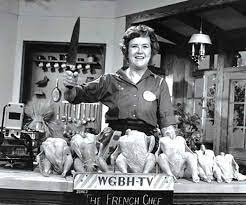 Julia had a great onscreen persona, and I like how in this show she manages, even with a bit of kitchen bumbling, to make the most wonderful looking foods. Mostly in black and white of course. And I am guessing her kitchen style is  very much how many of us home cooks would be also, even if she is probably more professionally trained than most home cooks.
She knows what she's doing; she skilled at techniques, but you can tell these weren't filmed over and over until she got it all perfect. I think that is another part of the charm of these old shows. 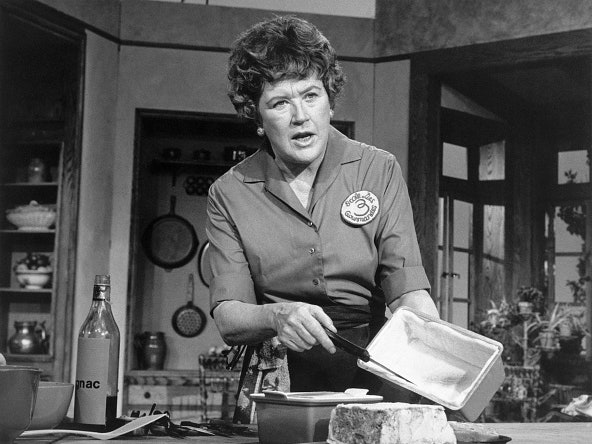 My favorite lines from the episodes I have watched is how, when she was cleaning off her counter, she brushed all the scraps on the floor saying she'd just get those out of her way. Obviously realizing that at home the cook would be the one who must clean them those scraps, she said (in so many words) that it was easy to make such a mess when you had an automatic floor cleaner because some else would sweep them up.
It is also interesting getting a glimpse at the kitchen and equipment she used. The show ran from 1963-1973, and I am sure the kitchen was state of the art then. Now it looks dated, and I am sure many modern chefs would miss their modern kitchen equipment for some of the prep tasks needed. Julia also had this one contraption for cooking an oversized zucchini she was going to stuff. It looked like an oval washbasin with these big heavy chains to lift it out of the pan of boiling water. I don't know if that was a real tool or something concocted for the show. And in the last episode I watched, she was using a duck press. I was curious how it was used, but also a little disgusted too. I guess I am one of those folks who sometimes doesn't want to know where (and how) their final food comes from.
It's fun seeing most of these cooking tools though, to see where we are now in the kitchen and comparing it (for me at least) back to things from my childhood. 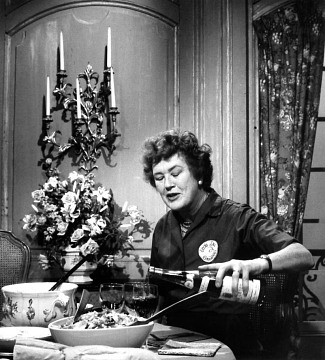 And she always end going into her dining room and sitting at the table.
This next photo shows Julia in her own home kitchen. If you don't know, it was donated to the Smithsonian Museum. 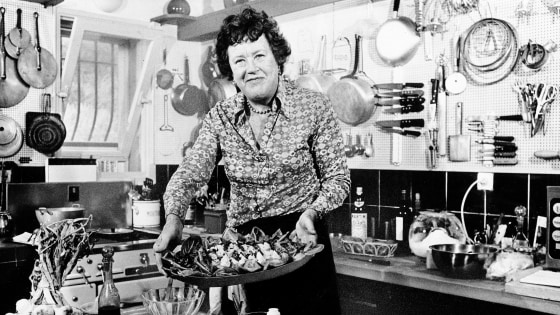 As you might already know, Julia Child had a fascinating life. She worked in military intelligence during World War 2,  lived in various places in Europe, went to cooking school when she was approaching middle age, wrote cookbooks and even had her own cooking shows. She was  49 when her most first and most famous cookbook was published. 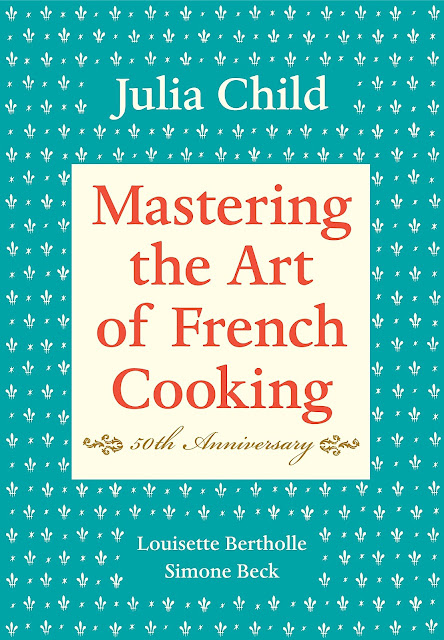 She co-wrote that book with 2 Frenchwomen, Louisette Bertholle and Simone Beck, making French cooking accessible to American home cooks.
I will admit, that like many people,  I enjoy reading and learning about Julia. She certainly was a woman ahead of her time and definitely a role model for so many other people.
I can't say I've read every book about Julia, and I'm certainly no expert, but here's a few I have read, just in case you  are curious about reading of her life also. 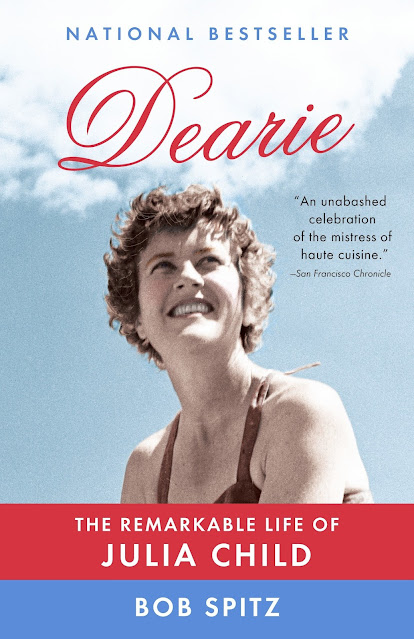 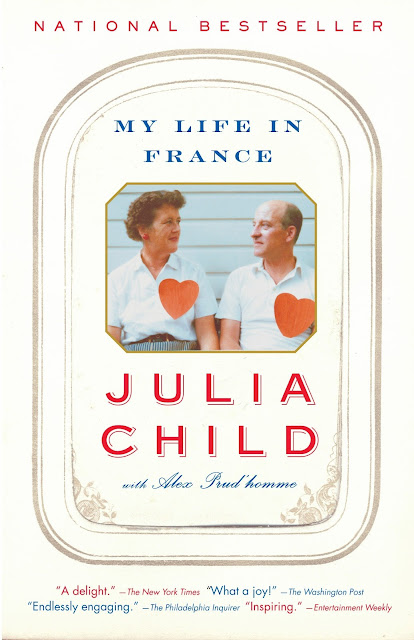 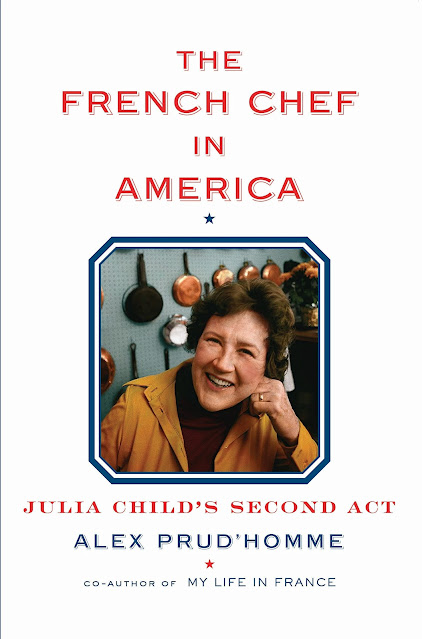 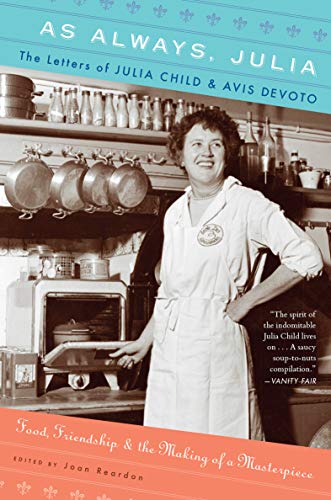 These books were all very good.
That's all for me today. I'm sure many of you might know more about Julia Child than I do, but she is always worth your time.
Have a great rest of your week.
Posted by My name is Erika. at 4:16 AM

Julia Childs is one of those people I really think I would have enjoyed meeting, She was quirky enough that I am quite sure I would have been immediately drawn to her, having known a few eccentrics in my life, and having always enjoyed them. I wonder how many people were lured away from roast beef and mashed potatoes, hamburgers and french fries, and fish sticks, by watching her show? Many, I hope. Big hugs, Erika.

Good morning Erika, excellent post. I really enjoyed it Do you get the Food Network channel? There is a brand new show called cooking with Julia I think it is-where the contestants watch clips from Julia's show and then make a dish. the winner in the end gets a paid trip to Paris for a cooking class.
There was also a really good movie about a young blogger that went through her cookbook and prepared every meal.
She was a fascinating person. It was quite a struggle for her to get the cookbook published. It still holds a high price when I was looking for it several years ago was still very expensive. will be checking out the books you shared
Thank you sharing this wonderful post for Food Wednesdays hugs Kathy

That's a fun movie! I should rewatch it too.

Hi Erika! Nice post! I love Julia. I have most of her cookbooks and I've seen many of her shows. She was fun to watch, and I too learned a lot of culinary skills from her! Have you seen the movie Julia and Julia? It was just okay, but a nice little tribute to her. When I saw that her kitchen had been donated to the Smithsonian, I was just thrilled...it is definitely a part of history!

I loved watching Julia Child's cooking show. It was filmed live so whatever happened happened. They couldn't go back and re-do. I remember one time she dropped a piece of meat on the floor, picked it up with a oops, oh well, and washed it at the sink and then went on with the recipe! I always thought it was so cool of her to use a torch to caramelize/brown things like creme brulee. There was also a recent movie about her and her ground-breaking time at the Cordon Bleu School. She was an amazing woman.

I LOVE your take on Food Wed. this week. I also have seen a few of those old PBS shows on one of my channels, too. It's great that you showcased her because I always enjoyed her humor. BTW, although I haven't watched it, there is an elimination type show that shows Julia Childs cooking or baking something, then the contestants have to make the same thing she made. It is on the Food Network.

I adore her. I've read all those books and all are terrific. I have Appetite for Life by Noel Riley Fitch on my TBR pile, hopefully this year. She was very "real." And smart in business and marketing. A stickler for accuracy in recipes (which led to a lot of her issues with Simone Beck). I've only had one fail with her recipes and it was probably me, not the recipe. She was emphatic about testing those recipes! I had the opportunity to meet her (briefly in a rope line) at a PBS meeting and she was charming to all. One of her fave foods? McDonald's fries!

My mom and I watched her show every week in the old days. We would laugh at some of the things she did and said. However, it was like a real kitchen, making mistakes and then just getting on with it. She was a genius and started a world of cooking shows. Very nice post.

I will confess that I have never seen any of the vintage Julia Child's cooking shows, Erika, but now I plan to check online. I have read a bit about her life and she was indeed a fascinating and accomplished woman of her time. Enjoyed this post!

Those old shows continue to be wonderful to watch. You did a great job of summarizing their appeal. I have read several of the biographies you mention, and really enjoyed them. And I have many of her cookbooks: the original Mastering the Art of French Cooking is covered with food stains because I've used it so much. I once spent 2 hours at the Smithsonian display of her kitchen and old shows on repeat.

I have never seen her cooking shows or read books about her, although I do know a bit about her, but when I read that she was "real" in her shows I was all for it. I love it when we can see that even accomplished chefs make mistakes or things don't turn out quite like they wanted, and it's okay or they think of a way to fix it (which again is a great lesson for us as well). I think she had a great influence on American food and cooking.

You asked what backed the images on my page today. The black and white backgrounds are from a security envelope.

Great post Erika! I enjoyed the film about her life Julia and Julia.

Simply adore Julia Child.. Have you seen the movie Julie and Julia?? If you haven't its a must see if you like Julia.. Great post! Hugs! deb

I've never heard of her or seen her programmes, but she must have been a great personality. Glad you had fun watching old cooking shows with her. Have a fun day, hugs, Valerie

I've never seen any of the shows -just clips- and didn't realize they were ever broadcast now. Cool! She had an interesting life, and she made other people's lives more interesting :)