Hi everyone. It already just about Tuesday (or is Tuesday when you read this) and time for T again. Where did this past week go to?

Last week ended with 2 fun days for me. On Friday I took a baking class at King Arthur Flour. I'll share that adventure with you Wednesday for Kathy's Food Wednesday post. You should stop by and share a post that has something to do with food.

Last weekend it was Maple Weekend here in New Hampshire, a time when maple sugar houses open up to the public. On Saturday my husband and I and spent the day helping and learning about maple sugaring with my daughter's future in-laws. They have their own  (private) maple sugar shack on their property, and they invited us out to spend the day with them. (They are nice people; we know them a bit as we've met them before.)

Anyhow, it is time to talk about our maple syrup adventure for T this week. I am linking up to Bleubeard's and Elizabeth's blog  where we share our drink related posts (anything to do with drinks) on either Monday night or Tuesdays each week. 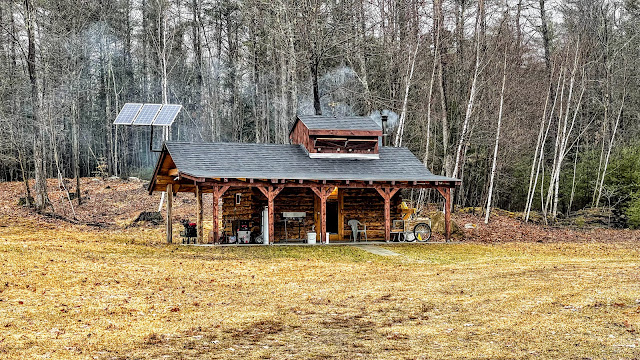 Here's the maple sugar shack on their property. They built it themselves a few years back, using lumber they also milled themselves.  It is also solar powered as you can see by the solar panels on the left. And it was running full steam as you can see by the wood smoke coming out of the chimney on the right.
Sap runs best when nights are below freezing and days are above freezing. As the sap from maple trees has to be processed in a short time from collecting,  syrup production had been going on for the last couple of weeks. This little sugar shack had already made 30 quarts not including the 10 quarts we made Saturday.
We had been invited out the week before, but since the sap can stop running at anytime,  we didn't know until Friday night that we were actually going the next day. 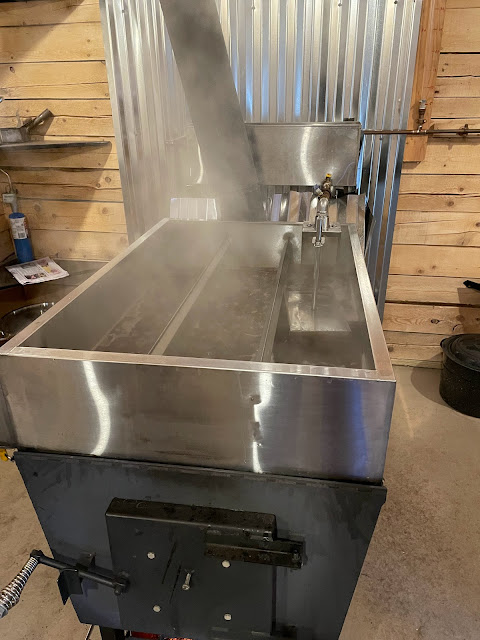 You have to boil the sap for quite awhile with a very hot fire going. This  (above photo) is evaporator; the woodstove is on the bottom and the boiling tray/pan called the evaporator on the top. The average is about 40 gallons of sap to make 1 gallon of syrup, because sap is only about 2% sugar, so you have to boil away a lot of water to get finished syrup.
There's a barrel outside of the building that holds the most recent sap. It is gravity fed into the evaporator pan. The smaller pan perpendicular to this evaporator (up against the the silver metal shield on the wall with the pipe running into it) helps control the feed into the big boiling pan so it doesn't overflow.  Once you start, the entire barrel of sap outside has to be boiled before you are finished, no matter how long it takes. 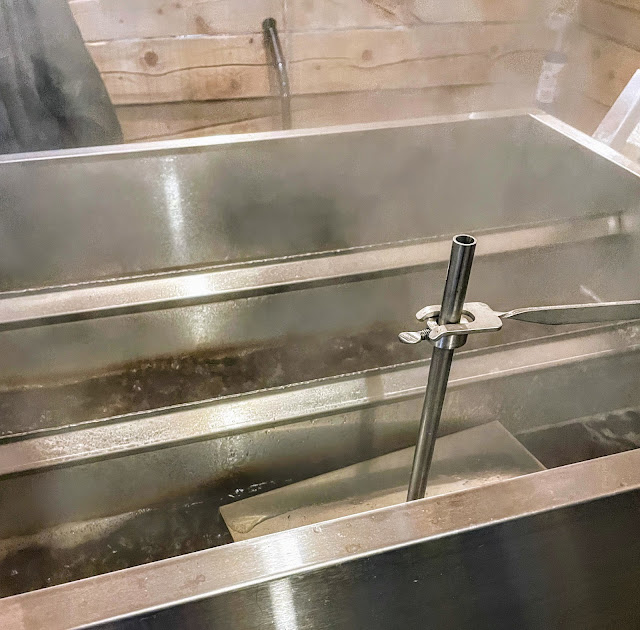 You can see the sap boiling away, removing a lot of the excess water so you end up with syrup and not sweet water.
When we arrived, this was how much sap was in the outdoor barrel (that still needed be fed into the big sap pan). The measurement is in gallons, so there was just under 35 gallons in the barrel at this point. 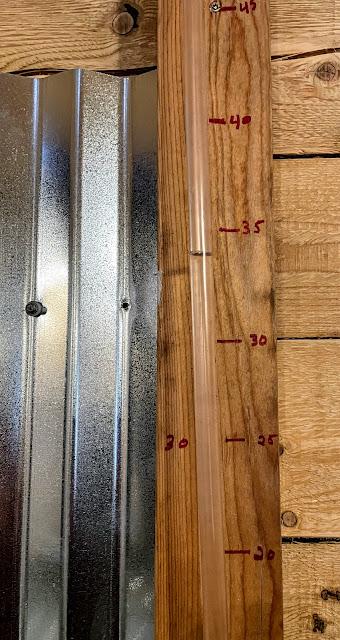 This took several hours.  During that time one thing that needed to be done was to keep stoking the fire with fresh wood. 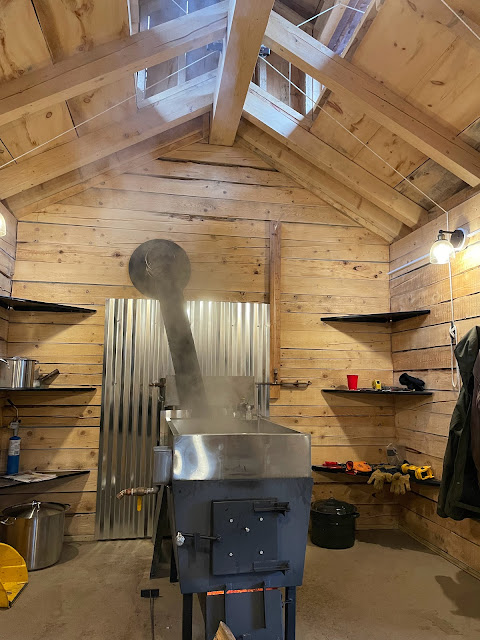 Luckily it was a raw damp day so the sugar shack was nice and warm.  I also finally figured out why sugar shacks always have cupolas with windows. You can see the steam coming off the boiling sap, and it needs a place to escape the building.
Once this sap in this evaporator is all boiled down to maple syrup, it needed to cool. It was then transferred to another clean drum. The next day it would be boiled once again in a smaller pan called the finisher over a camp stove just to kill off anything that might have gotten into it and to get rid of the last of water. After it reached the right density, it would then go through a filter unit and poured into bottles. Once you've done that, it would be ready to pour on your pancakes. Yum.
This sap that was boiled down Saturday would not go into its finishing boil until Sunday when it was finally cool. We weren't there Sunday, but on Saturday the final boil was going on for the syrup  made on Friday. Here's a few photos to show you the rest of the process. 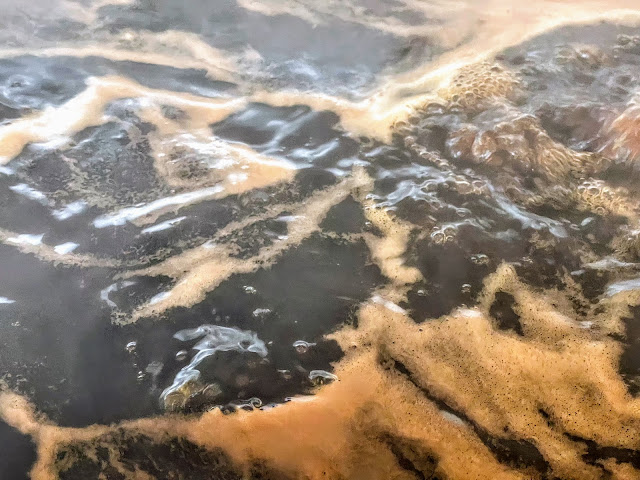 This is the final boil for Friday's syrup. This year we were told there was really dark syrup, not the very light syrup you often see. That is because we had some warm days interspersed with the cold ones. The warmer the days, the darker the sap and then the darker the syrup. 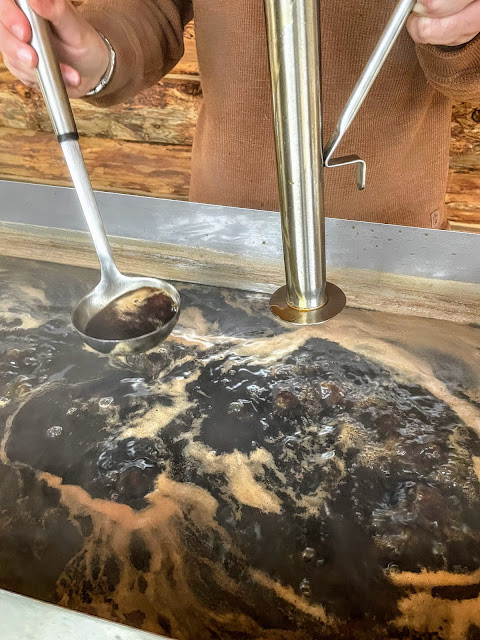 In this above photo, syrup is being tested in a density meter to see if it is at the right density to be considered finished maple syrup.
As it was finished, it was drained out of this tank into the top of this large cylinder. 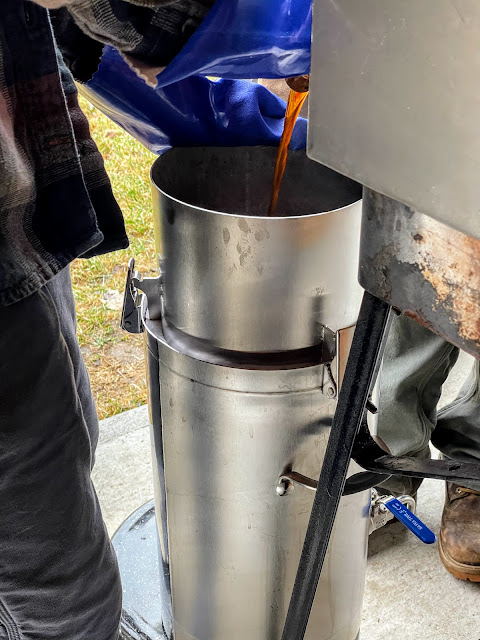 Where you see all the clamps on the side of the cylinder is where  some filter paper is put in. The syrup will be drawn down and passed through that filter paper once you turn on the tap. You can see the tap turned on in the next photo. 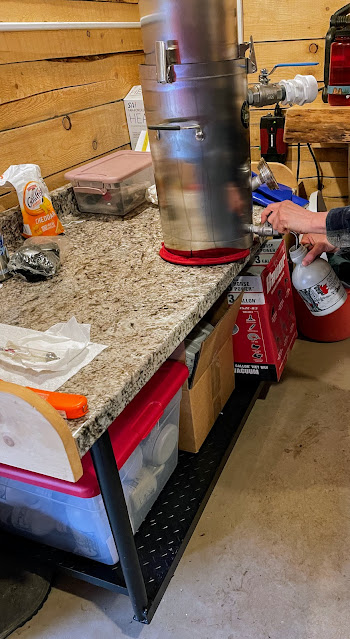 Tap turned on means it is  time to fill the bottles. Once all the syrup in the top part of the cylinder is gone, then the cylinder gets refilled back out at the final boil pan.
These bottles are then inverted capped and inverted. The inversion helped seal the bottles. 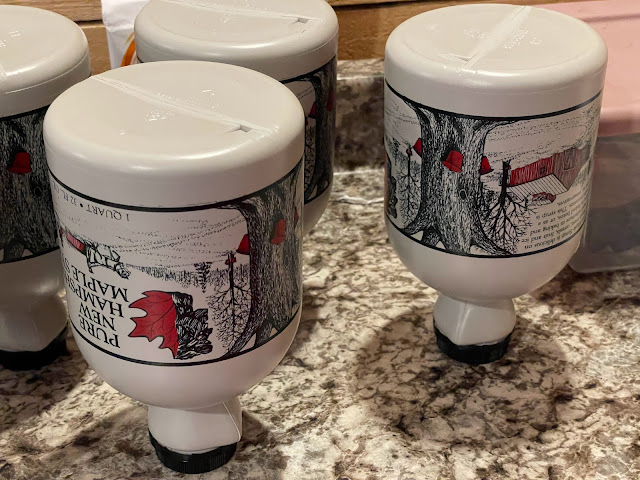 Once cooled and sealed, you can flip the bottles right side up. You can see some of the syrup  made before Saturday. 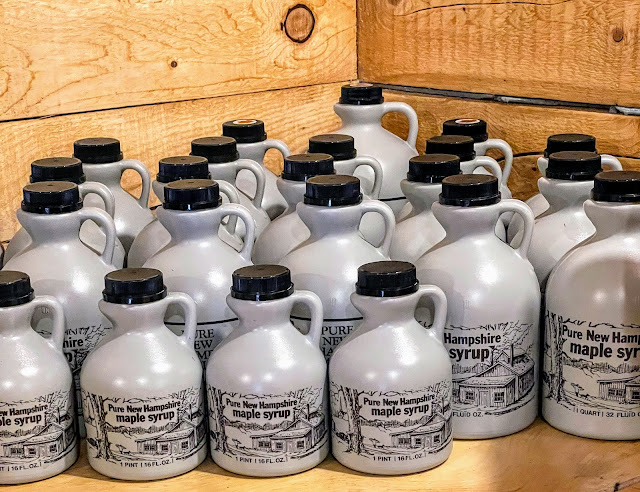 Of course we also had to take a taste test. Once the syrup had cooled enough so we didn't lose the tops of our tongues, we tried it out. 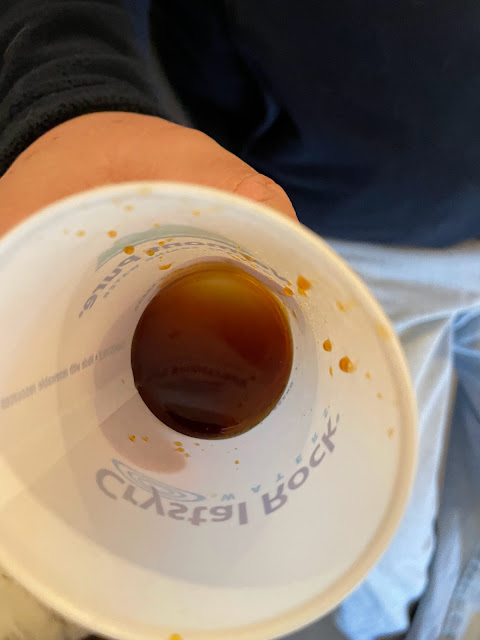 This is my ticket for T this week.
I can't say I ever drank syrup straight before, but it did taste good. I'm not sure I'd want a whole glassful though.
We had a fun day, and I am glad I had something different to share this week with you for T.
I hope you enjoyed it also.
Thanks for visiting.

Kudos to you for capturing the whole process in your photos and writing Erika - well done and so very interesting!! I'd love to see it all in person:)
Happy T day!

Maple syrup, as far as I'm concerned, IS a beverage. I just love that flavor! Thank you for the many fascinating pictures and the step-by-step description of the syrup creation process.

This is such an interesting post, I did learn a lot. That is a lot of sap that is needed for these small bottles of maple syrup we get in the stores. So wonderful that you could witness this. Do your daughter's future in-laws sell their maple syrup or give it to friends and family? The bottles are very beautiful as well.


We visited a sugar shack and saw the process and even ate maple syrup candy off a process table outside, when we visited Quebec City several years ago. I didn't take photos; these are great, showing the whole process. thank you. Happy T Day.

Hi Erika, thank you so much for this very awesome post-I really enjoyed this. Love that they made their own sugar shack which almost looks like a home from the outside. Allot of work for sure to get to the final product.
We always have a bottle of real maple syrup like this in the frig. the flavor is so worth the high sugar and calories.
thanks for sharing Happy T and I look forward to reading about your baking class. hugs Kathy

That's really cool! First time that I have ever seen how maple syrup is produced. The bottles are beautiful too.

Now that sounds like a fun lesson you attended!
Wonder about the smell.
Have a yummy T-Day :-)

Such an interesting process. their sugar shack looks so fancy compared to the sugar shacks I've seen around here. Nicer than my house, too. 😆 Looks like you had a fun day. That's a lot of maple syrup. Do they sell it at fairs? Happy T Day

Fabulous, this means spring is on the way - yay! Loved seeing how they make the maple syrup and it's so yummy, not sure I'd be able to drink much of it either though so pancakes all round please ...lol 😉. Happy T Day! Hugs Jo x

Thanks, Erika, for showing the complete process from start to finish. A few years ago, we visited a maple sugar shack during NH maple sugar weekend, but somehow missed it this year. We always have a bottle or "real" maple syrup in the house as there's nothing like it as I am sure you know too. How nice that your daughter's future in-laws have their own sugar shack, which I know involves a lot of work, but such sweet results 😋

I've never been to a place like that but have seen news shows, documentaries, and the like. Fascinating! It must be fun to see it in person.

Wow! What a great post. I enjoyed it thoroughly. Have a great day today.

I was delighted to see the entire process as the syrup is being made. I remember you taking us before, but this is so complete and explains why real maple syrup is so much more expensive than the imitation kind. This is a great outside-the-box post for T this Tuesday, dear Erika.

SO much goes into making Syrup! No wonder it is expensive but worth it. I loved seeing the process. I love maple syrup but I can't get my family on board. They prefer the imitation kind with corn syrup, yuck!
Thanks for sharing.
Happy Tea Day,
Kate

Reminds me of many years ago when I lived in Québec where maple syrup making was celebrated in spring. I knew a fellow (my daughter is actually named after his two girls) who had family connection to a sugar bush and we went there a couple of times. My favourite thing to do was to pour the warm syrup on the snow and pull it up like sticky, ultra sweet toffee. It is even called "Tire" after the French verb, tirer - to pull. That was a long time ago! Hugs, David

I LOVE maple syrup, so I would love to visit a maple shack - I've never seen so much syrup in the one place before! Sorry for my lateness, struggling with my sprained wrist. Happy belated T Day Elle/EOTC xx