Hi everyone. Happy T day to you.

Today for T over at Bleubeard's and Elizabeth's blog   I am writing about something I did with a couple of friends back in August of this year.We went to a Harry Potter themed  tea.

I thought since I haven't gotten around to posting this tea related event, and since we are in the season for dressing up in costumes and pretending to be other beings, I  figured this would be a good time for this post.

(And I know not all of you are familiar with Harry Potter, but I'll try to explain in case you aren't.)

There's a gorgeous old Victorian home in a nearby town that is a bed and breakfast. It also has a tea room where you can make reservations for T and lunch. During August they were running one of their theme months, and August's theme was Harry Potter. 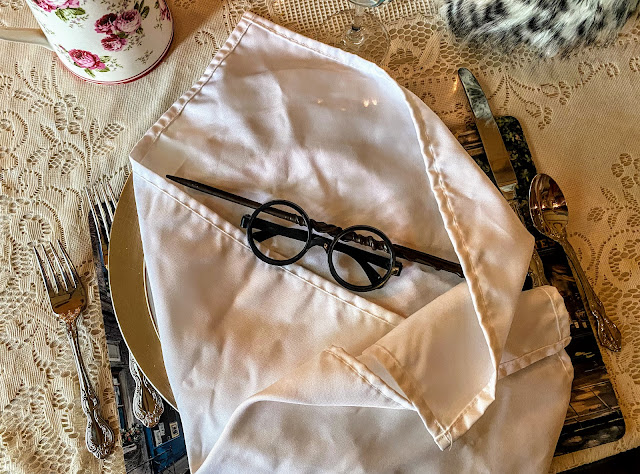 Each place was set with glasses and a wand so we could become the famous wizard. Also Harry's owl Hedwig had flown in to join us at the table. He didn't deliver any mail (as is his usual job), but he sure was cute. 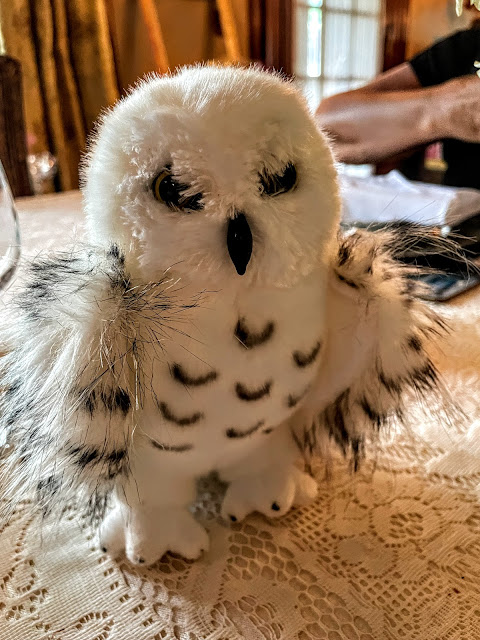 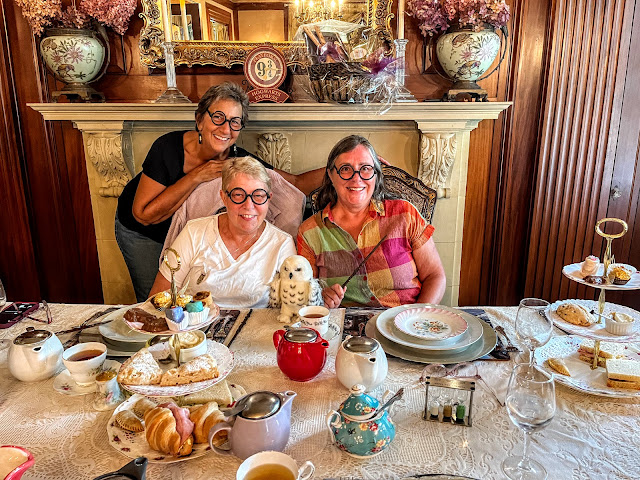 The photo above is my 2 friends and me (in the white shirt).  The photo didn't catch me with the best expression. I look better in this next one-smile. 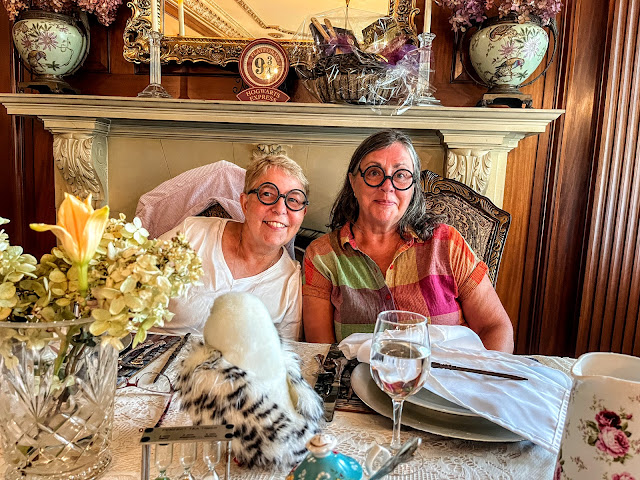 Each of us could  pick either one large pot or 2 smaller pots of tea. We all picked 2 smaller pots and also different teas so we could each try the others.  We had a huge selection of tea to choose from. I tried the pineapple mint, which was OK, and also a strawberry and peaches tea. Strawberry and peaches  was my favorite of all the ones I tried. It was deliciously fruity for a summer day. 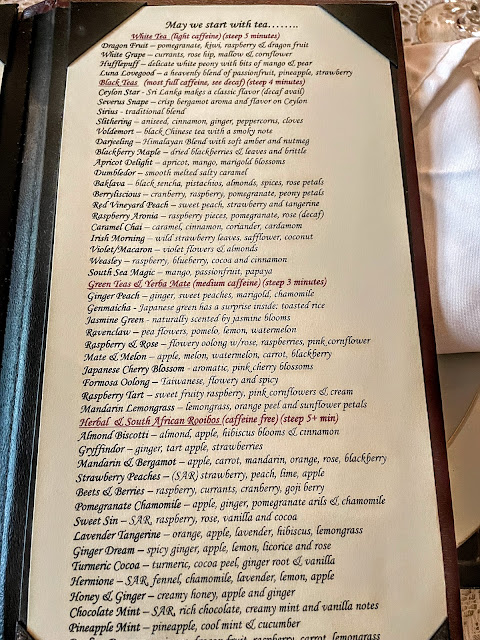 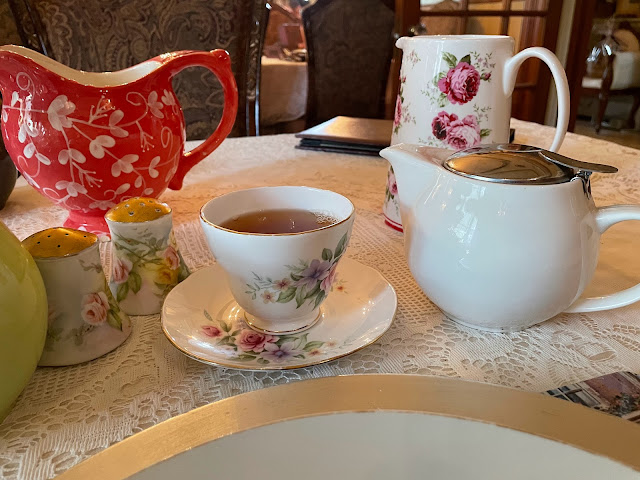 A Harry Potter themed lunch also came with our reservations . 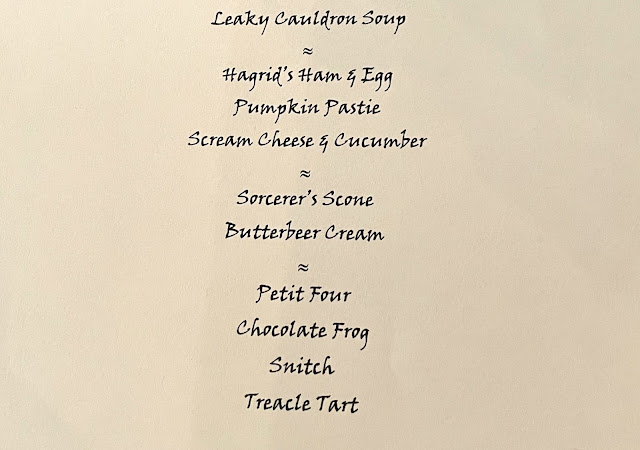 Here's a close up of lunch. 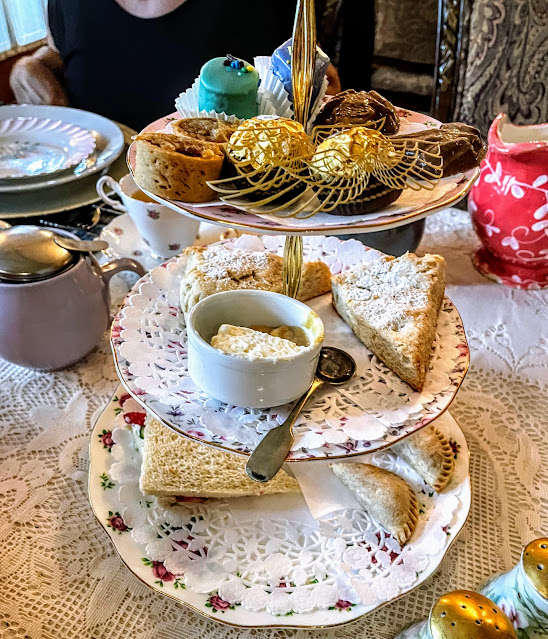 Not including Hagrid's ham and egg sandwich that was already on my plate. 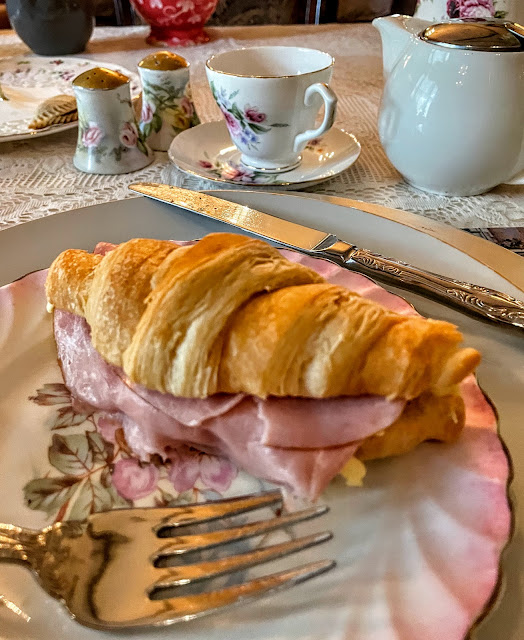 Our Harry Potter themed tea and lunch was lots of fun. And something different to do on a summer day. It was a tad bit pricey, but then again, how often do you get to wear a sorting hat (no photo to share) or here in the US, even get to visit a tea room? (Tea lunches not in a theme month are a bit cheaper.) I would definitely go again, either in one of their regular months or for one of their other themed teas. The tea room was really beautiful to be in, and the company was great.
(For those of you who aren't familiar with Harry Potter- The sorting hat is to see which of the 4 houses you belong in. In the story it's done on new students once they arrive at the Hogwarts, the school for wizards. The 4 houses you could become a part of are Hufflepuff, Gryffindor, Ravenclaw and Slytherin. And yes, I must really be a Slytherin because this is the second time I've had a hat on me and the second time it said Slytherin.)
And sometimes wizards become "bad" or seem to get into trouble (whether they are guilty or not) and are sent to jail. I guess I did something wrong, but at least  I was also able to escape. Now there is a wanted poster for me. 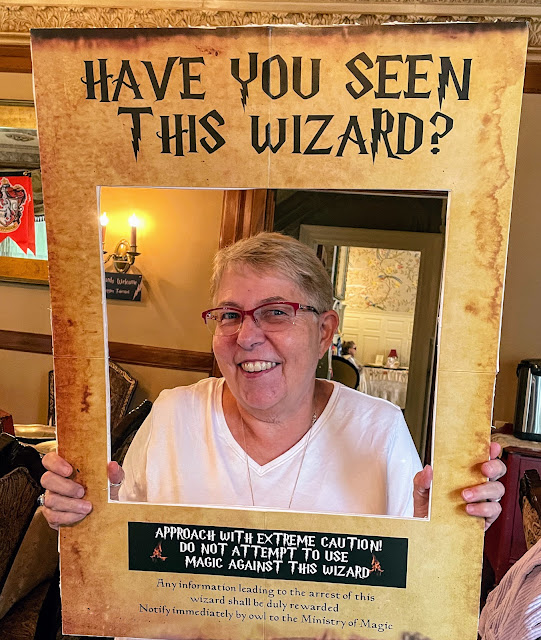 I'll leave you with that.
Have a great T day and week ahead. Thanks for visiting.

I love Harry Potter books, films, and the Magical Beasts sequels. You and your friends look as if you had a blast!

Hi Erika, what an awesome tea party-looked so fun with teas and foods too and with friends-special hugs

wow! This is an exciting theme for having T together. I can see how you and your friends enjoyed your time together. Everything here is arranged nicely. Tea cups are beautiful too.
Have a Happy T day!
Amila – www.diaryofanewmom.com

I love HP books more than films. The white owl is for sure really cute. That's a tea party that I would love to join too :-))

What a fun-fun-fun post!!!
You look great, even in jail, and the owl. Awww - all is done with so much love to detail!
Wonderful and surely worth a pricey treat!
My King Frog-Baby sits on my right hand again and enjoyed this with me!
The tea sounds very yummy, too, and the croissant!!! Want! But won´t ;-) We have Brussels Sprouts!!!
Happy T-Day, and hugs and thank you for explaining Harry Potter, too!
I´m more the "Supernatural" kind-of-gal (sexy guys there!).

What a fabulous event you visited, and you all look so good in you glasses. I had them as a kid, they were the standard health service glasses for children! Love all the photos, I wish I had been there! That really is a day to remember! Thanks for sharing. Hugs, Valerie

I am not familiar with Harry Potter, and I am not even a big fan of tea, but this all looks like great fun and I would do it in an instant. It may have been a little pricey but if your patronage enables a local business to prosper from your support it's money well spent. The whole affair seems delightful. Hugs - David

What a super cool tea party! It looks like you had a wonderful time and I love the table decorations and menu, the Harry Potter theme was so wonderfully created - amazing 😊. Those frogs and snitches look amazing and with the teacups and saucers it made it a Harry Potter dream of a tea party - fabulous! Loving the last photo of you too - Happy T Day wishes! Hugs Jo x

What a fabulous tea!! The theme is wonderful, as is the menu for tea. I would choose Luna Lovegood tea. The food menu looks similar to recipes I have seen in the Harry Potter Cookbook. Now I want to get it out again and have a browse.
So glad that you had fun with your friends. Thanks for sharing with us!
Happy Tea Day,
Kate

Wow Erika! What a very fun tea party. Everything is so perfectly set. I am so glad you were able to attend. Have a lovely day today.

What great fun! I would love that and would also love going to various events and regular teas there. You're right that places offering tea with teapots and tea fare are rare here. I hope they continue to do well.

So fabulous, Erika! The three of you look wonderful, excited and very happy. I love it!

I read Elle's Harry Potter post and came back to tell you how alike the two of you thought. Then I noticed my comment, which I left last night is not there. I hope it's in your spam folder. Anyway, I do want to say what an amazing spread you three had. We had two tea rooms in Wichita at one time, then they blth disappeared. Not enough interest, of course.

Now THAT is a perfect Tea T post! How very clever -- it all looks beautiful and delicious and I loved all the Harry Potter touches!

This is brilliant Erika! I wondered where you had been "sorted" and now I know! You all look great with the Harry Potter glasses on too, and I love the Golden Snitch on the top layer of the cake plate! Cute little Hedwig too. Happy T Day! Elle/EOTC xx

Great post.
The Harry Potter themed tea and lunch looks and sounds so much fun.

Oh, I would have loved going to this tea! How fun. Great photo of your smiling face. You are right, this was a perfect post for Tea Day! Happy T Day.

How fun! The Wanted Poster frame is a fabulous photo of you - Frame in a Frameworthy! xoxo P.S. - that ham and egg croissant looks so delish!

This looks so much fun as well as what looks like an amazing spread to enjoy! I think we are lucky in the UK to have so many tearooms to visit! Belated Happy T Day, hugs, Chrisx