Today for T  over a  Bleubeard's and Elizabeth's blog, I am going back to the last weekend in October when it was both my husband's and my daughter's birthdays. My daughter (the birthday girl) and her husband came to visit for the weekend, so it was a busy one.

I spent much of that weekend in the kitchen. I was baking and making both a big birthday dinner (for my husband) and a big birthday breakfast (for my daughter) the next morning. The cooking part seemed to be less work than all the dishes and other kitchenware that needed either hand washing or a run through the dishwasher. ( I had to run the dishwasher 2 times each day that weekend.) Then that kitchenware had to be put away. And the counter seemed to  need wiping constantly.

BUT I am NOT writing this as a complaint, I'm just explaining! It is always fun to sit around the table with a good meal, a glass of wine or a bottle of beer, and even a breakfast mimosa, and have lots of good conversations with people you love. By that point, all the preparation is done, and without the time in the kitchen, the meal wouldn't be the same.

For T today, let me first offer you  a birthday cupcake. The good news is that since these are photos they have zero calories and zero sugar. Smile.

You have a choice. 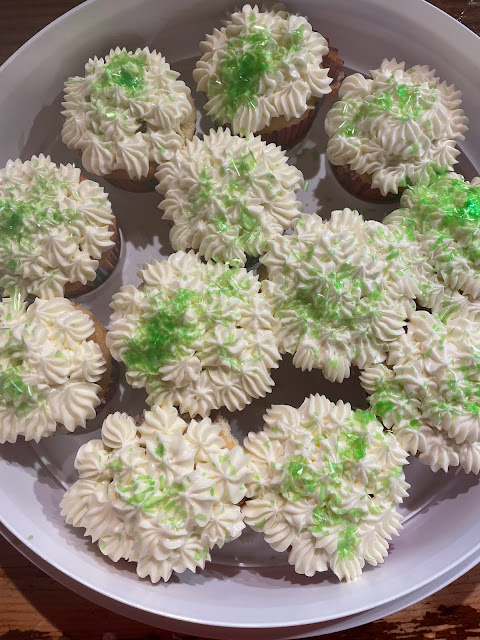 My daughter loves key lime pie, so this year she had key lime cupcakes. I made a homemade white cake and also some homemade key lime curd that I filled each cupcake with. The cupcakes are frosted with a key lime Swiss meringue buttercream frosting. I had to make this frosting twice because when I went to beat the egg whites for the meringue, I accidently picked up the whip attachment that had some butter on it. And if you know about meringue, it won't form if any fats are present. 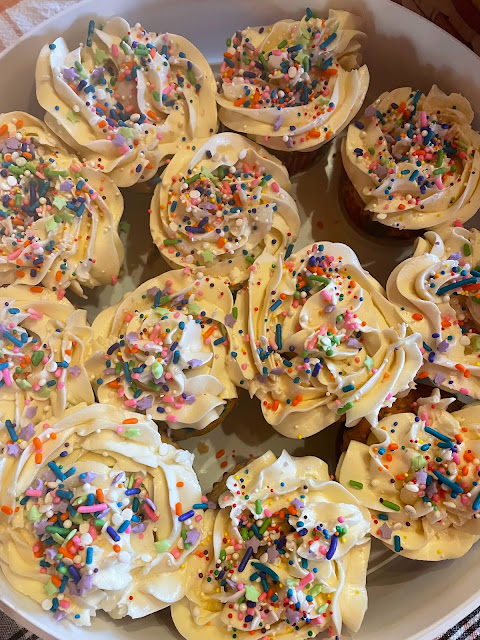 My husband decided since he is now at the age when he could start collecting social security (but is still working full time so isn't)  that he wanted a kid's style cake. Something to make him feel young. I made him a homemade white cake with sprinkles in it; that is also known as a funfetti cake. His cupcakes are frosted with vanilla Swiss meringue buttercream.
And I totally forget to take any dinner or breakfast photos, but before dinner the birthday celebrants opened their gifts, and while they did, I had an after a day in the kitchen pumpkin beer. This is my link to T Day this week. 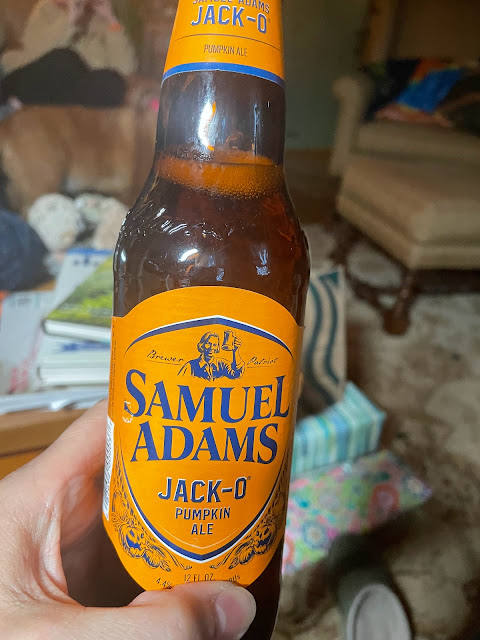 I'd never tried the Sam Adams version of pumpkin beer.  My husband and my daughter's husband picked this up on their trip to the grocery store to get the extra eggs we needed, but they definitely made a good choice. This was a  fall spiced and very tasty pumpkin ale.
That's all for me today. My messy kitchen is now back to being neat again (but still a bit too cluttered). Have a great T day and week ahead.

Happy belated birthday to your hubby and daughter. Yes, the work never ends in the kitchen but the results are worth it. ohhh that beer looks so good. Have a great evening.

Your cupcakes look so tempting, Erika! Good thing you are on the other side of the continent. Yes, before all this deliciousness is the work in the kitchen. I did quite some cooking for freezing today, and while things were cooking I was already able to do a lot of the clean-up. I was listening to some oldies and singing along loudly - it was a very good day in the kitchen. I have to say though that I like your idea of the after-a-day-in-the-kitchen drink!

Your birthday cupcakes look so good and pretty too. I haven't seen this beer in the stores here. My husband likes that brand Happy T Kahty

Your family is really lucky that you cook their favorites for them! I hope they have many happy returns on their birthday celebrations.

Happy Birthday to your hubby and daughter, Erika. Those cupcakes are looking so beautiful! Have never had a pumpkin beer..did it really taste like pumpkin? I meant..shouldn't it taste more like beer?

LOL, at least you have a dishwasher. I am the only one! And yes. I hate the cleaning up, too. Our kitchen is also very small.
But, yes - home-made food is the best and I by now enjoy doing it!
The cakes sure leave me "cool", but, ohhhh, the beer I would like to taste.
Sounds like fun times, so cheers and to a happy T-Day, hugs!

Hi Erika, Messy kitchens are a sign that people cook and enjoy life there! Your cakes all look wonderful, you are really queen of bakes and cakes! Have a great day, hugs, Valerie

Happy birthday to your daughter and hubby- their choices are fab and fun. Happy T-day too. That beer looks really good and super fun.

The kitchen work isn't always super fun, but it is like art - you are creating something wonderful. Your cupcakes are a work of art and heart.

Happy birthday wishes to your hubby and daughter! Loving the cakes that you made for them, so much thought went into the flavours and I'd love to try them both with my cuppa today - so yummy 😊. Of course the Pumpkin Beer is my favourite for T Day, we don't get this type of beer in our shops as all things pumpkin hasn't caught on here, but no worries, we make our own - so yummy! Happy T Day wishes! Hugs Jo x

I would hope that the daughter and the husband who were the beneficiaries of all this gave a hand in the kitchen. In our house the dishes and kitchen cleanup are one of my chores. Hugs - David

The birthday celebrations sound like a lot of work, but look totally worth it. The cupcakes are amazing. I liked your husband's idea for a kid cake so the Funfetti cake made me smile. Happy T Day

I hope the birthday recipients had fun over that weekend. I LOVE the idea of the key lime cupcakes and they look good, too. I'm not big on vanilla, but I like the looks of your husband's choice of frosting. I'm with Iris, This is the first home I've owned that didn't have a dishwasher. Like in my craftroom, I have to clean and put away as I go. It is too small with zero counterspace, so you are lucky to have a nice kitchen area.

That pumpkin beer sounds great. I like Sam Adams stout, and this sounds nice.

Thanks for sharing those amazing cupcakes and your after-the-baking beer with us for T this Tuesday, dear Erika.

I know what you mean, celebrations are a lot of work but worth it. Your cupcakes look amazing and I love the sound of that key lime curd filled cupcakes. So glad that you enjoyed the birthday celebrations in your family.
Happy Tea day,
Kate

Oh the cupcakes look fab, I thought the first one was going to be key lime, yum yum. Happy birthday to your DH and DD, I do not like doing dishes, I really should get a dishwasher one day. Happy T Day! Elle/EOTC xx

For me thats the worst part about cooking... the clean up! Glad everyone had fun and good food! Happy T day! Hugs! deb

Let me get this straight, Erika, you baked 2 cakes AND 2 batches of cupcakes???????? For 4 PEOPLE???
Geebus, you've been eating nothing but sweets since then????
I now see why you had to run the dishwasher 4 times in 2 days! LOL
I enjoyed reading the comments about having no dishwasher and you will appreciate this: growing up with a biology teacher mother, we ALWAYS had a dishwasher AND everything we put in it was already rinsed off so well it looked clean. Mom's lecture was: a dishwasher doesn't clean, it SANITIZES. Anyway, I have never been able to live without one because of that. Fast forward to getting married, Honey already owned his house and NO dishwasher. He'd grown up in a home that never had one. Well, I said I had to have one, so guess what I got as a wedding present from Honey? He said, here is YOUR dishwasher. haha 35 years later, he still has not touched it and I'm fine with that! XOX

I'm pleased to know that these cakes are calorie free, hoping they're sugar free too as I devoured them in my imagination! Happy T Day and two Happy Birthdays too, hugs, Chrisx

Belated happy 🎂 wishes to the dual celebrants in your family. Those cupcakes and cake looked delicious even in the photos, Erika.

Happy belated birthday to your husband and daughter.