Happy weekend everyone. It's a drizzly grey Saturday here in New Hampshire.  The hubby and I  have been cleaning the brush out of the front of our house. It's pretty messy since we never use that area or have even planted a lawn there. It's a small strip of cleared land between the woods and the house, and no one sees it unless you look out  front window of our house. But it is looking better. now that we've chopped down some seedlings and they've been hauled off to the dump's brush pile. (Usually it used to get done by my husband once a year but then he got sick, so it's been a little too long on the cleaning.) 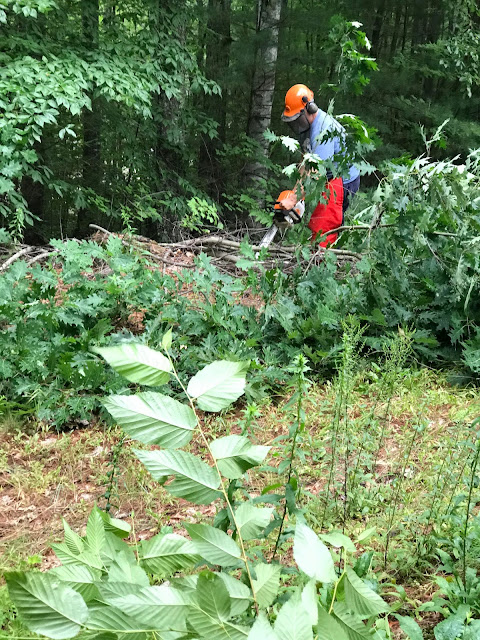 The hubby looks like a proper logger out there in his chain sawing gear.
And can you find the truck in this photo? It is so covered with brush we cut down, he with his chainsaw and me with some lopers. 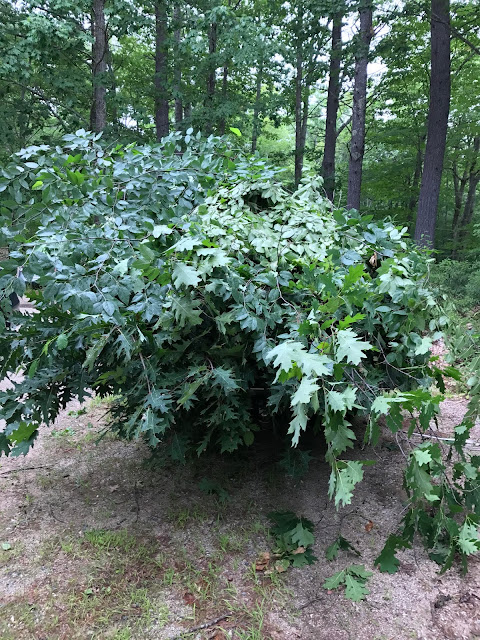 But it looks a lot better now. We need to do some work on the front of the house one of these days, like add some steps off the front door. Our house is almost 40 years old and even the people who owned it before us never put steps on that door. maybe we will one of these days. 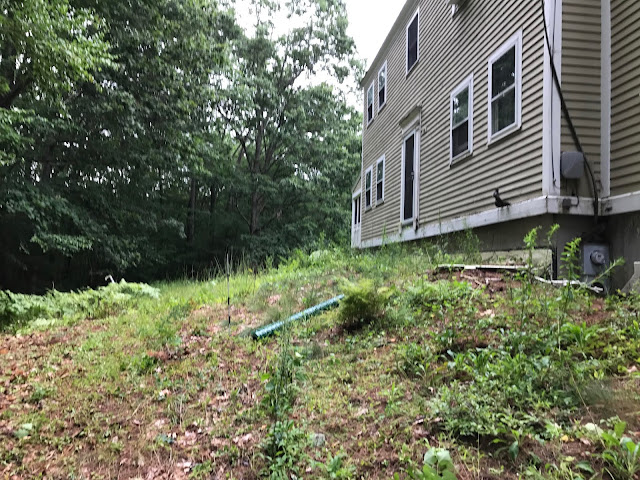 We're going to enclose it with some snow fence (seeing the fence quotes we got were ridiculous) for now so the dogs have a place to play unhooked. They've taken into visiting the neighbors lately so it's time for them to have some boundaries. No sense buying an expensive fence for something that you can't see.
I think the dogs will get a plywood plank up the to door, making  them a kind of ramp. I think maybe this fall we should work on the door and steps. I don't know if the hubby is with me on that one though.
And on the art front I have  a few of the more interesting doodles from my drawing journal today. 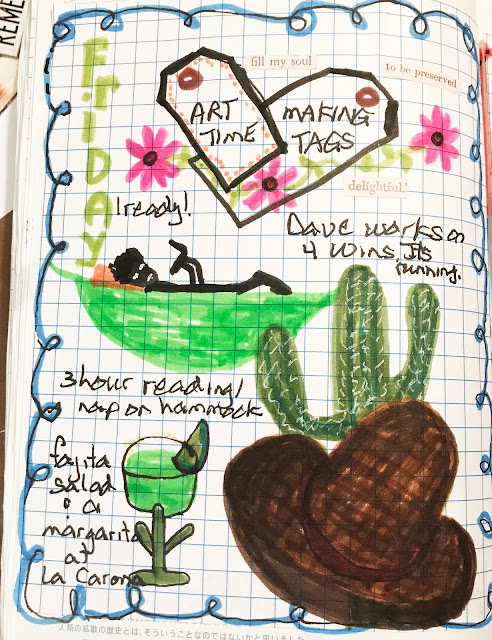 I look like a zombie in my hammock doodle here. But I guess since I was so relaxed you could say I was turning into one. :) 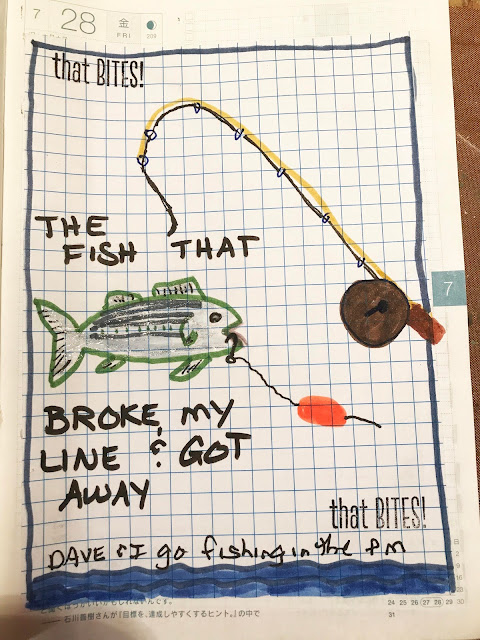 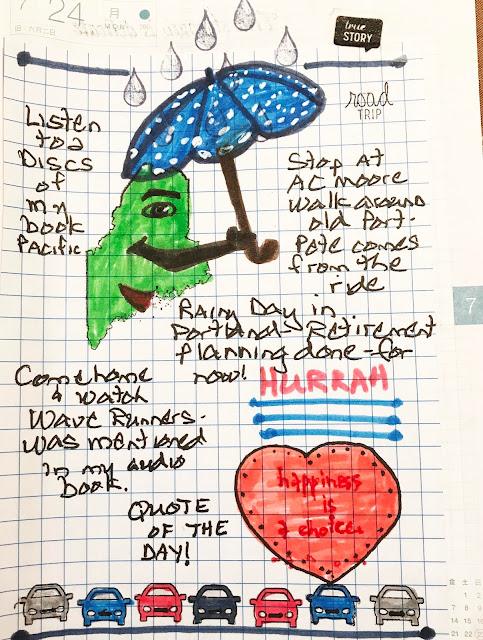 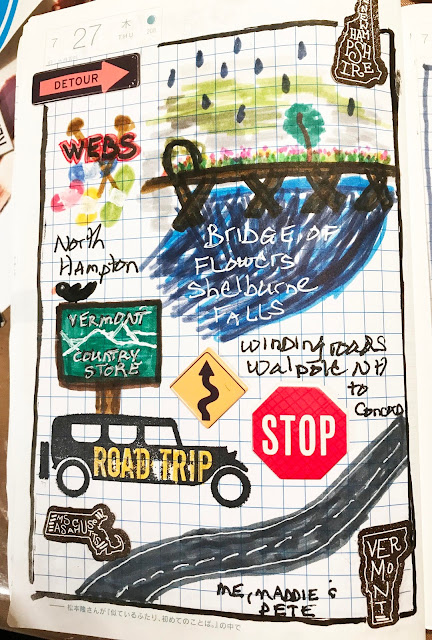 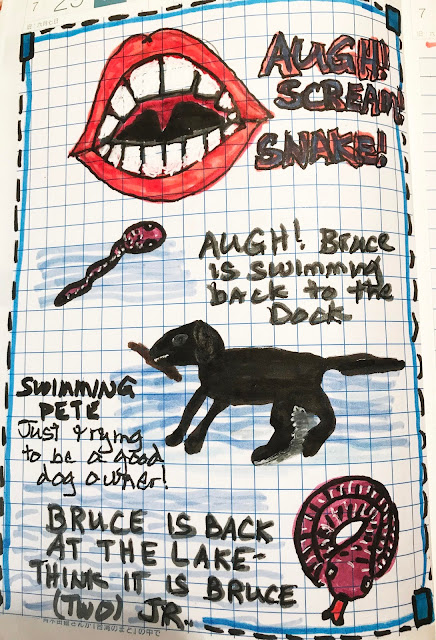 If you don't like snakes DON'T enlarge this photo but this is the new resident on my mother-in-law's dock. We call him (or her) Bruce, which was a name we came up with last year. Based on the old Electric Light Orchestra song "Don't Get Me Down."  The word is actually groose, but we all thought it was Bruce. The we would be my sister-in-law and myself, with the 2 twenty-four years old daughters we each have.
Gives me the heebee jeebies.
I didn't even see Bruce at first and walked by him several times until I saw the tongue. I would have thought the dogs would have scared him off, but no, they didn't see him either. 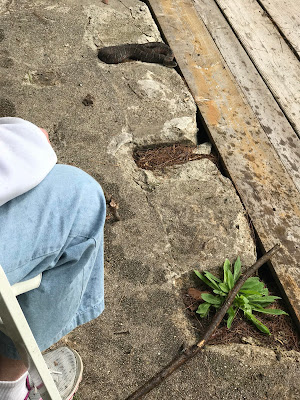 My mother-in-law may be 83 but she is one brave woman sitting so close to the snake. That was the stick she was hitting the ground with, hoping to get him to move.
He eventually swam off and now I will admit I am a little afraid to go swimming.
I am NOT a fan of snakes.
That's some of  life here at the moment.
Hope you are having a fantastic weekend.

Busy hubby - and I love your cartoon pages - you are so artsy with that pages! Always something to do when one has a house - gosh!
With our ready-mixed concrete and the foundation of the fence all went well yesterday -
I would also be afraid of going swimming - Bruce looks dangerous!!!
Happy Sunday ahead!
oxo Susi

Wonderful journal pages, they are so much fun! You have been very busy in the garden, it all looks very professional what you are doing. But that snake - yikes! I would not be sitting next to it, that's for sure! Definitely not my idea of a pet. Have a great weekend, hugs, Valerie

I was quite impressed with the clearing you two did. I know how hard it is to get all that done. I wish I'd had that much help when I was getting rid of a tree on my front lawn. Unlike yours, my front lawn can be seen from a rather busy street.

The neighbor who lives two doors south of me installed one of those silent fences that you put underground. The dog wears a collar that tells it what the boundaries are. Of course, they don't take their dog on walks or to a pet sitter, so it probably wouldn't work in your case. I've heard some automatic door openers can trigger the collars if the dog is off its own property.

Loving your doodles. They are great pages and much better calendar pages than anything I'll ever make.

Although the snake didn't scare me, I'm one who respects them too much to take them for granted. Hope your Sunday is wonderful.

And here I am focusing on your snake lol. I can't tell what kind it is. Do you know?

The clearing work looks like quite a job! I tend to like the overgrown look, so my motivation to pick up a chainsaw would be slow to kick in.

What a brave woman she is indeed. Liked the journal pages as always, warm greetings to you.

Of course, as I don't like snakes, I had to enlarge the photo, haha!
I love your journal pages as they are so colourful and happy and are a wonderful record of your life. I like the green creature with the blue umbrella (?) and the "zombie" in the hammock., another haha!
I'm intrigued that you don't have steps up to your front door, looks quite difficult to climb up with heavy shopping, say, (or even without) but I expect you use another door for that. Thanks Erika for sharing your life so generously, I love visiting you here.

Looks like its been busy around your home. I hope you are both resting up and not doing too much.
The journal pages are awesome, your doodling looks amazing.
Now to that last photo, your Mom is one brave lady sitting there while that slippery snake is so close by. I for sure wouldn't be nor would I be wanting to go in the water. I think you will tell I don't like those creatures.
Hope you had a good weekend.
Yvonne xx

I think your mother-in-law may was very brave sitting so close to that snake.

I enjoyed your photographs, thank you.

I have an overgrowth area on the sideline by the neighbor's fence. We had some trees taken down last year and the whole area just filled in with weeds. I've been thinking of renting a goat to take care of it. I'd like to turn the area into a meadow.

Love the doodles. Especially the screaming mouth. I'd be hitting the high notes too. I don't like spiders or snakes. We did have a garter snake that lived under some rocks by the back door when the girlies were little. The named him Mr. Scaly. He didn't bother me too much.

Hope the weather is nice for you to enjoy more time in your hammock.

I'm with you on the snakes -- she's brave indeed!

Good, hard work being done at your house. The fence, I know, will come in handy in a few months. I should spend hours outside doing work but it doesn't seem to be happening. I'll try to take a page from your book!

I especially love all your doodle graph paper pages. They're always loads of fun and happy!