Hi everyone. I should call this post More of the White Mountains.

You might remember my post from last Saturday when I wrote about a one day road trip my husband and I took to the White Mountains of New Hampshire. (Here's the post in case you missed it and are interested in reading it: Mount Washington).  Last week I showed you photos of Mount Washington. Today I want to share some other views with you from my day out. 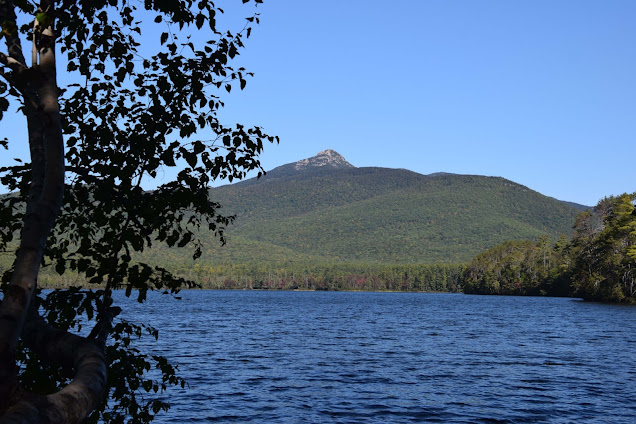 If you are driving north from my house, you pass Mount Chocorua before you get too far north. This mountain has a distinctive shaped peak.
According to Wikipedia:
Chocorua's summit is a picturesque rocky cone, and the mountain is purported to be one of the most photographed in the world.[3] The view from Chocorua Lake, which often casts a reflection of the mountaintop, was chosen to represent the White Mountain National Forest on a quarter issued by the U.S. Mint in 2013 as part of its America the Beautiful coin series.[4]
I wish the lake was a bit calmer for a lake reflection, but there was some wind that day. Yet you can see the famous tip, and the blue skies were fantastic.
Here's a nice view looking out from a rest area in North Conway, but not of Chocorua. Even though this was only 2 weeks ago, you can see there wasn't much color in the leaves then. 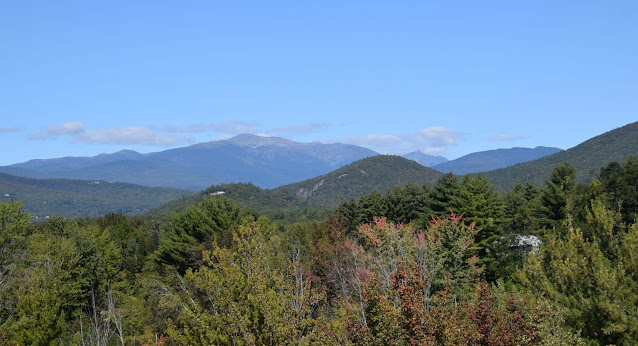 New Hampshire has several mountain notches (or narrow mountain passes) in the White Mountains. We drove through Crawford Notch. It is a favorite of mine. The views are beautiful, but maybe not the most dramatic. What  I really like how it feels wild and rugged. I also like how the road twists and turns. It really feels like a notch. 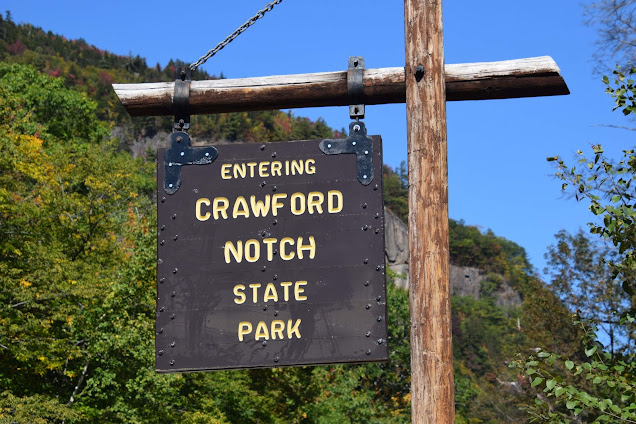 We stopped at the area called the Willey House and took a short trail walk. 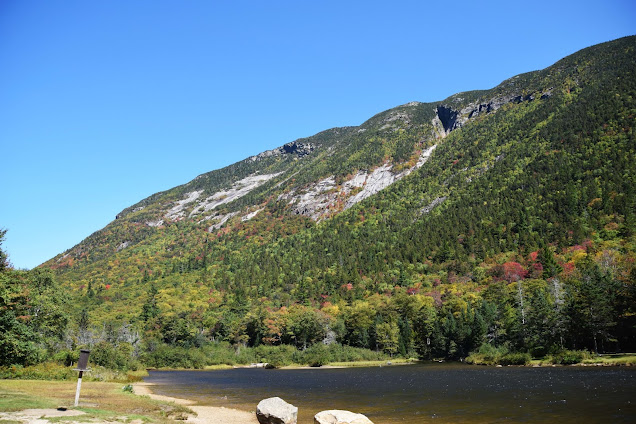 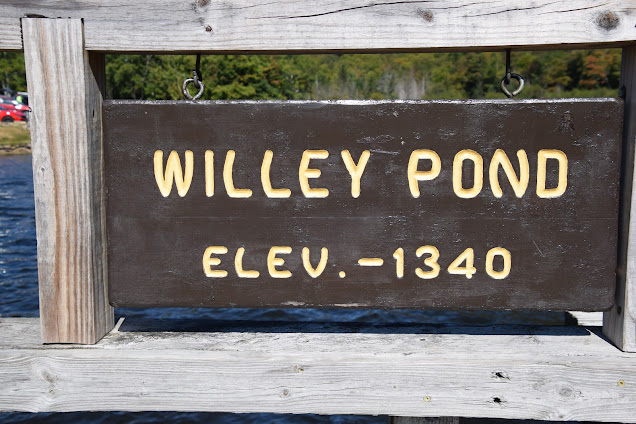 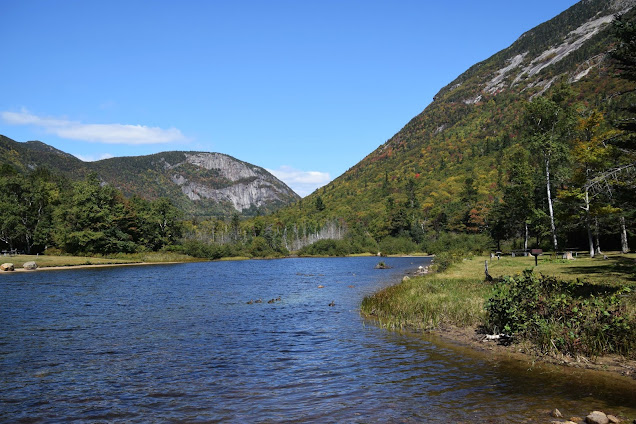 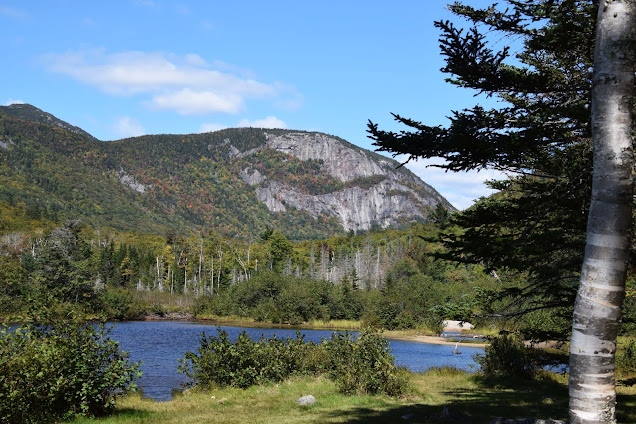 This area is called the Willey House because of tragedy that occured here. 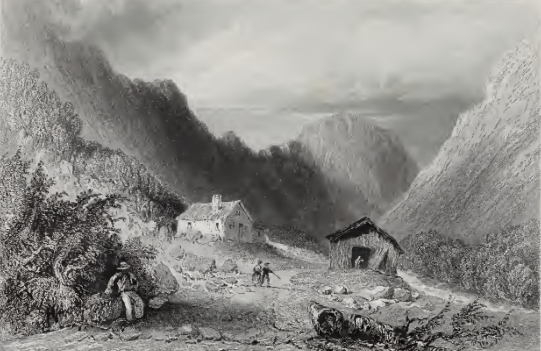 Drawing by W. H. Bartlett of the Willey House, Crawford Notch. Once the home of Ethan Crawford, it later became a tourist attraction following a storm in 1826 which resulted in the deaths of the Willey family and others.
And also from Wikipedia:

Northern New England experienced a drought in the summer of 1826, which ended with the arrival of a terrific storm on the evening of August 28. Flooding followed, with the valley at Crawford Notch being one place that suffered the consequences. All but two of the bridges on the turnpike that ran through the notch were destroyed, trees suffered a similar fate and the high sides of the valley were gouged by swollen streams and landslides. The Willey House was a scene of desolation due to the effects of an avalanche on a mountain behind it. The house, however, had survived in an island of calm because the surging debris split either side on a low ridge and then unified again beyond it.[1]

Local residents, including Ethan Crawford and the Reverend Benjamin G. Willey, Samuel's brother, visited the house in the aftermath of the storm. It was empty, with signs that there may have been a rapid departure from it, such as unmade beds, clothes strewn around and ashes in the fireplace.[1] There was an open Bible on the table.[3] A search of the devastated area over the next few days revealed the bodies of the Willey parents, two of their daughters and two hired hands; the remains of the other three Willey children were never found.[1] Some livestock had also been killed, including those in a now-destroyed stable.[3]

There followed various theories as to what had happened, the most likely of which is that the occupants abandoned the property as the avalanche approached but in doing so, in darkness, they unwittingly put themselves in the path of it around the point where the flow reunited.[1]

It is a sad story and even more sad that the area became a tourist attraction because of this event. I guess no different than today, but what a strange trait  curiosity can be sometimes. 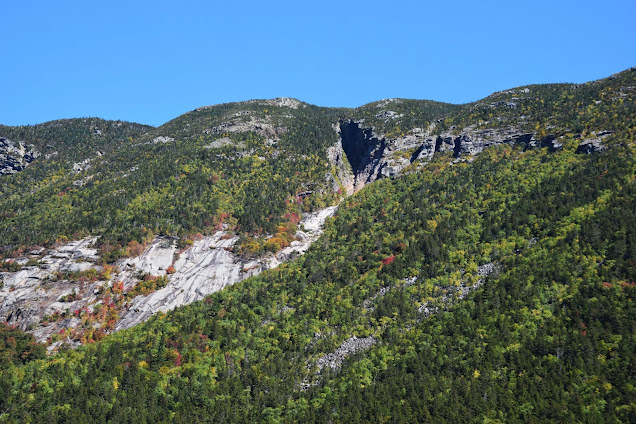 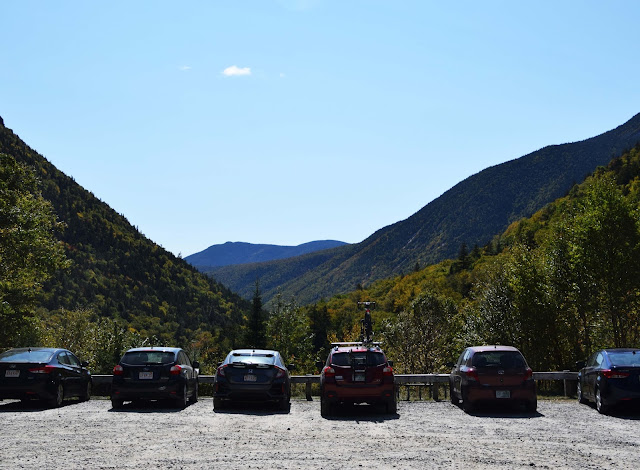 This parking lot photo was taken in the northern end of the notch, and you  can see why it is a notch. The road goes through that narrow mountain pass you can see.
On our way home we saw a sign for Bear Notch. We had never  heard of Bear Notch, so we quickly checked it out and decided we should try it.
Bear Notch Road is only open part of the year. It did have some pretty views. 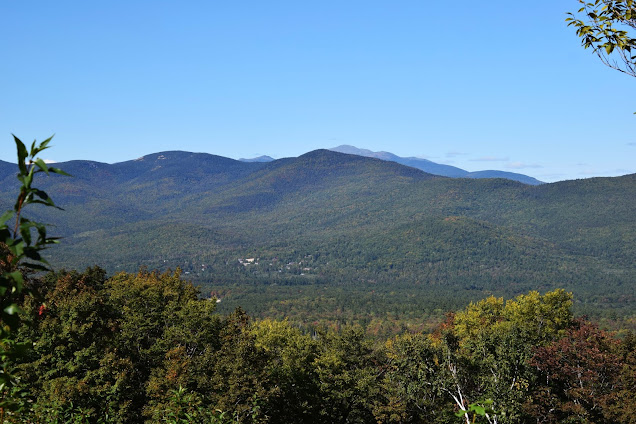 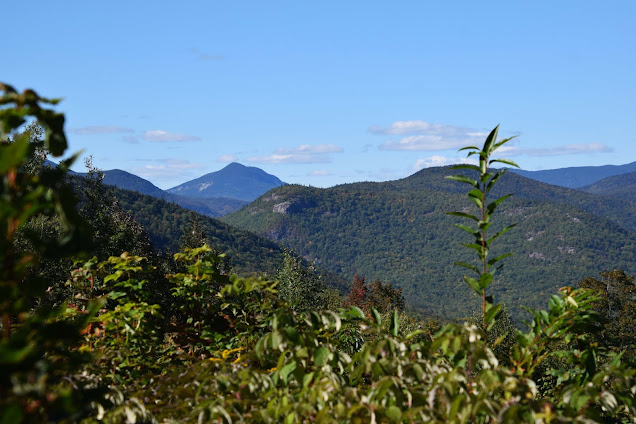 Perhaps you can spot the pointed cone in the distance of Mt. Chocorua. It is the clear point in the back of all the other mountains.
Besides the great views, the Bear Notch road cut off the heavier traffic through a couple of touristy towns and took us down about half way home. It was a good find!
Those are all my road trip photos (I was the driver that day and had to stop to get any photos), except for my lunch which I will share with you Tuesday for T. Hope you enjoyed them and a little bit of New Hampshire history too.
Happy weekend!
Posted by My name is Erika. at 5:42 AM

Hi Erika,
Thank you for the interesting description of your famous places there in New Hampshire. Wonderful lake and mountines indeed. In the world there are so many beautiful places and nature wonders. Unfortunately I haven't visited U.S.
By the way, we earlier discussed about Tuve Janson, the Mather of Moonies. A brand new film about her wonderful life was taken premier at movies here. It has got pvery positive notices.
Our Corona situation has just gone more badly, and I don't care to go movie, unfortunately.

I'm wishing you a happy weekend and inspiring October 🍁🍂
Sirkka

Wonderful photos, dear Erika. I must confess to being a bit envious, those mountains look so good. Here everything is totally fat, we really live in the Rhine plain, and that means lowlands! Glad you were able to take such a great trip with your friend. Have a great day, take care, hugs, Valerie

Beautiful part of our country!

Franconia Notch is the only notch I know. New Hampshire has such beautiful scenery and interesting history. Weird story that turned the area into a tourist attraction. Like you said some things never change

This is a really great story about your trip with your usual impeccable photos. It's good to see other parts of the world, another marvellous benefit of blogging.
I liked the ripples on the lake and your short trail walk and the views of the hills and mountains. It looked like a lovely day and it is the same here - the trees are turning early.
What a sad story about the little house but a wonderful atmospheric drawing. I wonder when that was done.
I like your new (?) header - I must change mine, it is getting old.

Scenic beauty! Thanks for these striking views. The story is a sad one. That they'd have been safe in the house is a tragedy.

Your photos are very lovely and tempting. It must be fun to drive around that area.

Stunning photos and interesting history Erika! You live in a beautiful part of the world.
Alison xx

That IS a sad story. What a glorious setting. I've never been to this part of New England and I can see why it would attract visitors. The hike sounds like a nice break and oh, those views!