Last week ended with some wonderful weather on Saturday. It was crisp (I actually needed my down vest), but clear clear blue skies. A perfect day for nice views.

If you stop by my blog frequently you might have read that last week I took a ride with my husband to his meeting in Northern Vermont. He was going alone and his meeting was going to be short, and for me, it was great to "go" somewhere out of the ordinary.

In fact, my husband and I both enjoyed going someplace different that we decided this past Saturday to go for another drive and see some different scenery. This time we headed north in our own state of New Hampshire and head into the White Mountains.

The White Mountains are a mountain range covering about a quarter of the state of New Hampshire and a small portion of western Maine in the United States. They are part of the northern Appalachian Mountains and the most rugged mountains in New England. (from Wikipedia)

We live on the eastern side of  the state and decided not to drive  across the state.  That meant we headed out and drove a couple of hours in a more or less northerly direction.

Mount Washington is the highest peak in the northeastern US at 6288 feet (1917m).  I know that's not very high compared to a lot of mountain ranges, but the Appalachians, of which the White Mountains are part of , are one of the  oldest mountain ranges on the planet. Therefore they are really eroded.

Mount Washington is notorious for its erratic weather. On the afternoon of April 12, 1934, the Mount Washington Observatory recorded a wind speed of 231 miles per hour (372 km/h) at the summit, the world record from 1934 until 1996. Mount Washington still holds the record for highest measured wind speed not associated with a tornado or tropical cyclone. (Wikipedia)

OK, if this post has been a bit heavy reading, I just wanted to give some background info. We headed in the northwest direction., through Crawford Notch and beyond to Coos County where this big mountain is located.  Today I am going to share the mountain with you.

Here's the western view of Mount Washington. On the left  side you can see the railroad that goes up this side of the mountain. The towers on the top are for the weather station. The scars in the middle and right side are from avalanches, rock slides and water run off caused erosion. 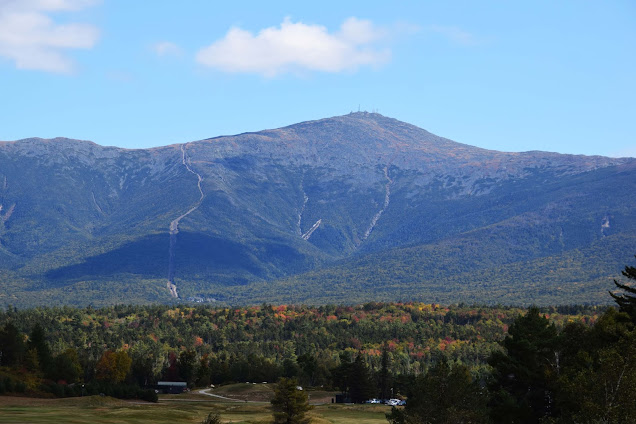 The railroad that goes up Mount Washington is called the Cog Railway. We didn't ride it up that day. It is pricey, and really one of those things you only need to do once.  I had gone up with my family when my daughter was younger, and we were doing a local vacation.
Plus although the temperature was around 52 degrees F on the bottom, on the mountain top it was only 26.9 degrees F.  And we had some wind too. So as chilly the as the bottom was, the top was cold. 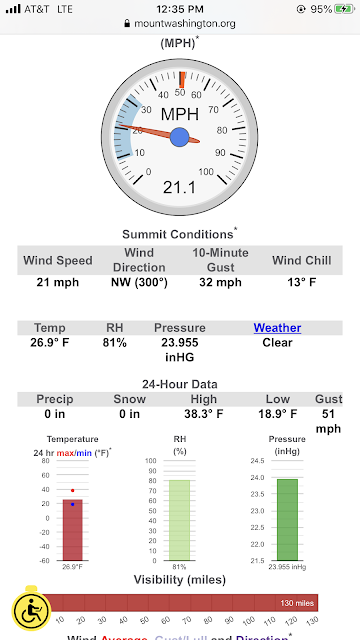 Never mind the wind.
But it is fun to watch the trains. So we took a ride up and went out to see what was happening. 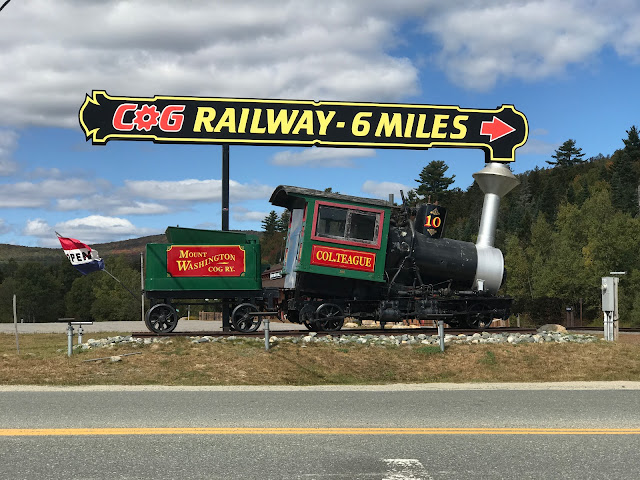 W did walk through the tiny free museum. When we arrived there were few people around, so we had the museum to ourselves. 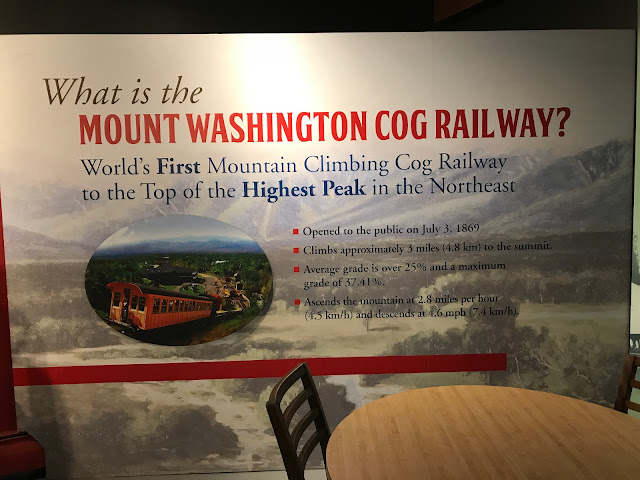 Here's one of  the trains on the way down. 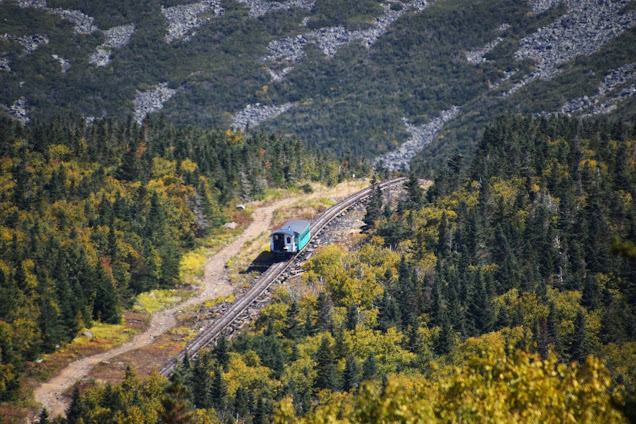 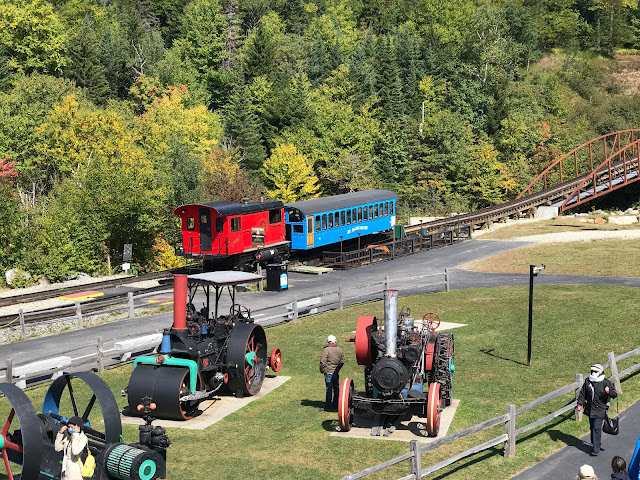 When we rode the train it was still coal burning. Not the cleanest burning, but definitely historic. Now they have changed over to biodiesel. And at least the passengers aren't showered with black smoke and coal dust anymore. 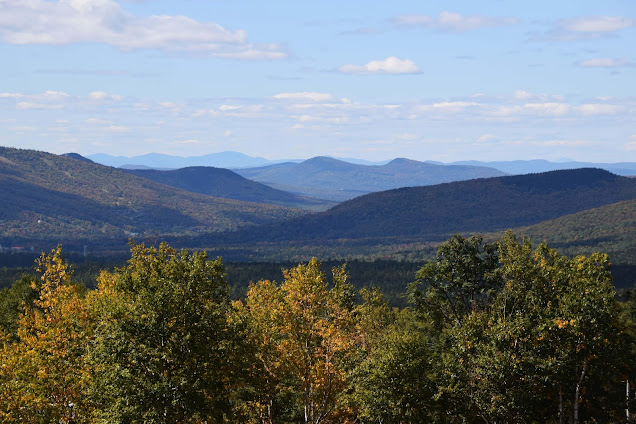 We had a great view looking west from the parking lot. It was nice to just sit in the car for a little while, enjoying the warmth and sunshine. And the view too.
Another famous spot on the western side of Mount Washington is this vintage beauty. 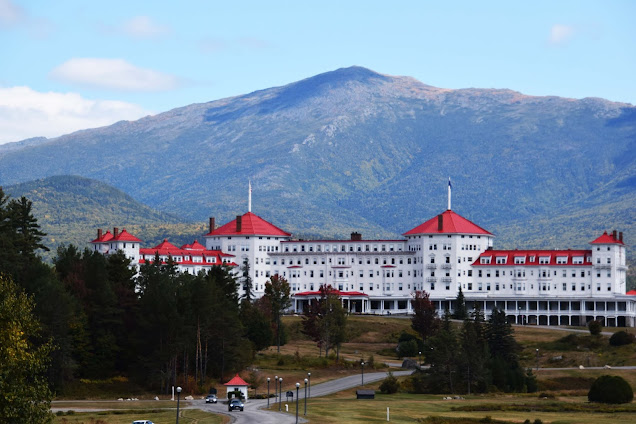 The Mount Washington Hotel
Some day I should like to come and stay here. But this trip was just a day out adventure, and with Covid, I am not yet ready to stay in a hotel yet.
The hotel was originally built between 1900-1902.  Originally the hotel was only open in the summer, but recently it was bought out by a hotel corporation and it is now open year round. There is a large ski area right down the road, and I think they also now own the hotel. I wonder what it's like inside?
Maybe one day I will be able to tell you.
That's all for me today. I hope you enjoyed your virtual road trip.
Thanks for stopping by!

I really enjoyed this post, I have never this area of the country.
Was so glad to read that this hotel is in use-looks like a beautiful spot for a getaway
Happy Saturday hugs Kathy

Such beautiful terrain! I absolutely love all of New England. I’ve seen so many “I climbed Mt. Washington” bumper stickers, and now I know it doesn’t mean on foot!

What a wonderful pace you visited, I would love to go on that train, too. And the hotel looks good for a little holiday. I would love to go somewhere else, too, but it's just not possible at the moment, and I don't have a car, so have to go on foot, or with bus/tram. And this week the public transport will be on strike, so I'll be doing a lot of walking! Have a fun weekend, take care, hugs, Valerie

I think when Covid clears some, you should go for a night (or two) at that hotel. You and your husband could celebrate your successful transplant experience, the easing of Covid and returning to normal. And it is beautiful. I'm glad you shared the history -- I appreciated the background. I'd love to take the train but I know what you mean about some things you only need to do once, even if they are fine.

What a terrific post. I'm glad you had a good day out!

We went by Mt. Washington on the way to Lancaster last Oct. We had thought of doing the Climb either by car or the railway. As you said, the railway was expensive and both are a long-ish trip. The Young One sometimes has issues with motion sickness.

35 years ago, we attended a wedding at the Mount Washington Inn as it was called at that time. The bride was from Bethlehem, NH and the wedding was a beautiful affair.

It certainly is pretty in the White Mountains

I enjoyed my virtual trip, especially never having been to this part of the country. Great photos!

You have some really beautiful scenery around you! The hotel does look very intriguing; I hope they did a good job renovating it. If you don't spend a night maybe some time you can at least get a look inside or at a restaurant there, when it's safe to go indoors.

Reading the story of your trip, I also imagine riding the Cog Railway with a track that cuts across the body of Mount Washington ..., very beautiful scenery.
Thank you for sharing a fun story. greetings from Indonesia

Glad you enjoyed the visit to Mt Washington and I agree that if you have ridden the cog railway once, then it's enough, as it has gotten even more costly over the years. We have been inside the Mount Washington Hotel and had lunch there as well. We were even shown one of the guest rooms at our request, but IF you plan to stay in the White Mountains, then do check out the Mountainview Grand, which is our favorite place.

This was a really fun trip, Erika, and I enjoyed it from the comfort of my own computer although I am pretty sure I would have loved it in real life too.
These cog trains are fun, we went on a few in Europe and you are right about the difference in temperature as it goes up. We wondered why other passengers were wearing heavy clothing on a warmish day and soon discovered why. The hotel looks magnificent. I wonder how they manage to maintain a hotel that size.
Thanks for all the great photographs, all so amazingly clear.

It looks so lovely, I did enjoy seeing your photographs.

Spectacular scenery - what a wonderful trip to take, even just for a day. I do find mountains have a way of putting things in perspective, a bit like the night sky. At the moment I mostly hope the human race gets wiped out before they wreck the planet beyond rescue for the rest of the plant animal and species. But that's in my bleaker moments!
Alison x