Happy Thanksgiving to all of you who celebrate today. And a very happy Thursday to those of you who don't.

Today is the 4th Wednesday of November and a day (in the US) to take stock of things and give thanks.

I watched a show on the Pilgrims who celebrated the first Thanksgiving on PBS (The American Experience: Pilgrims) the other day.

The Pilgrims chose to celebrate not because things were absolutely wonderful, but because they were the ones who had survived, been able to reap a harvest  and been able to keep the colony/settlement from falling apart.  They had lost around 50% of those who had settled with them only about a year earlier (lost to diseases, not enough food, and other causes).  I can't image having left so many of their group behind in Europe, and then sailing to a place which was not the one they had planned on but the one they ended up at. They didn't sail at the best time of year either, leaving England in the autumn and arriving in New England in early winter. Then they spent that winter watching so many they travelled with dying.  They robbed graves  (since many of the native Americans in that area had died from probably a smallpox outbreak not all that long before the Pilgrims arrived. This plague was brought over by European fishing fleets out in Georges Bank on the hunt for cod).  They put their dead/dying in sitting positions up against trees with guns to scare off  other Native American  communities that were not so friendly.  That must have been hard.

So they celebrated what they did have.

I found this show fascinating, and it put this year's Thanksgiving into a different perspective for me, especially with our current national and world situation with covid.

Just something to consider.

My art today  for Wendy's bird challenge at Art Journal Journey and also for day 26 of Leah's Art Everyday Month celebrates one of the stars of this American holiday, the turkey. Or in this case, the wild turkey. 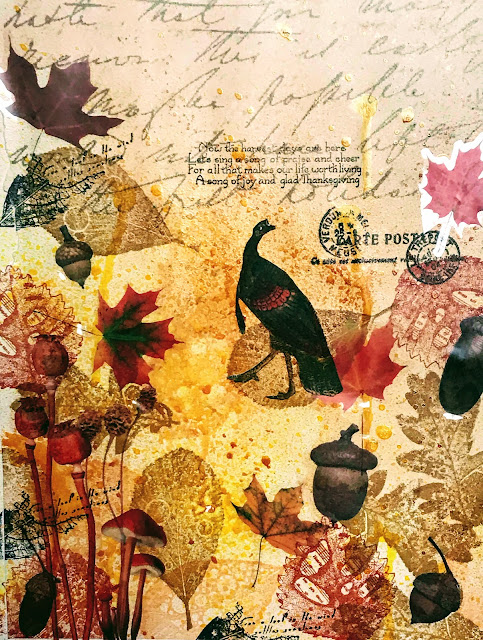 Wild turkeys are definitely a success story.
In New Hampshire not all that many years ago, there were no wild turkeys left . According the the Fish and Game webpage: Wild turkeys totally disappeared from New Hampshire 150 years ago because of habitat loss and the lack of a fish and game department to regulate hunting seasons. NH Fish and Game began transplanting wild turkeys into the state in in 1969-70 (this initial effort failed), then again in 1975.
Now there are over 25,000 birds roaming my state. We have several rafters or flocks in my town, and it is not uncommon to come across them. I probably see them at least once a week either when I am out driving, out walking or sometimes  I even see them in my yard and underneath my bird feeders.
Here's a few photos taken in June of 2017 when one of the flocks  that live around me wandered through my yard with their little poults or babies. 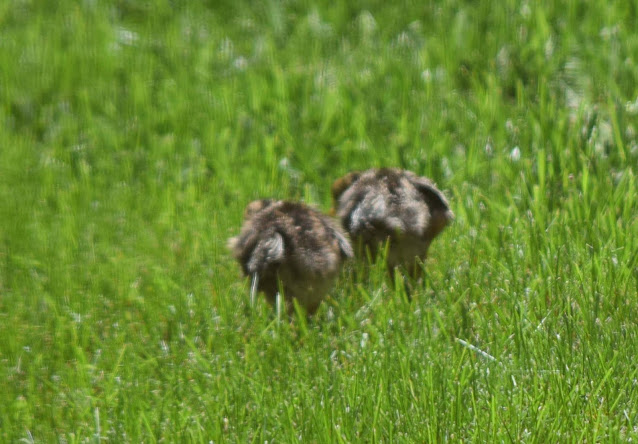 You can see how little that baby is compared to the adult in this next photo. 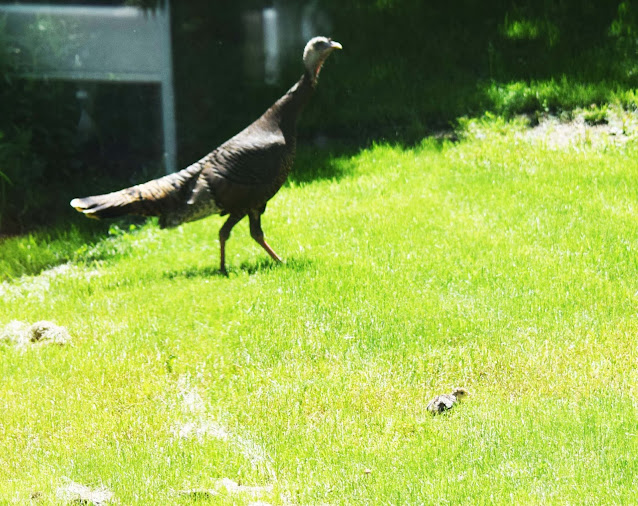 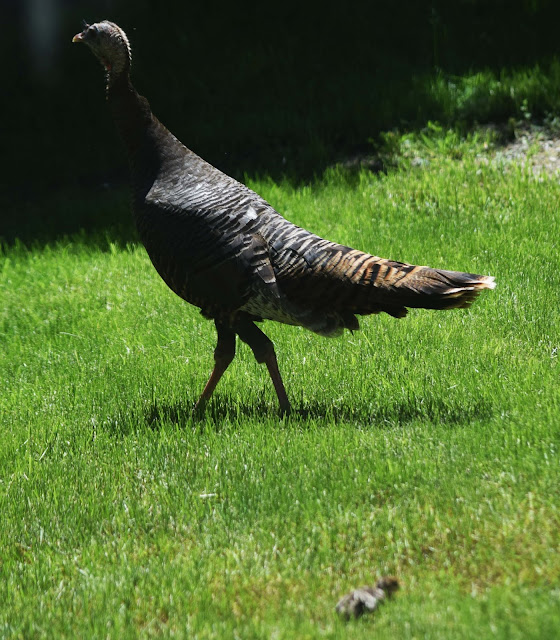 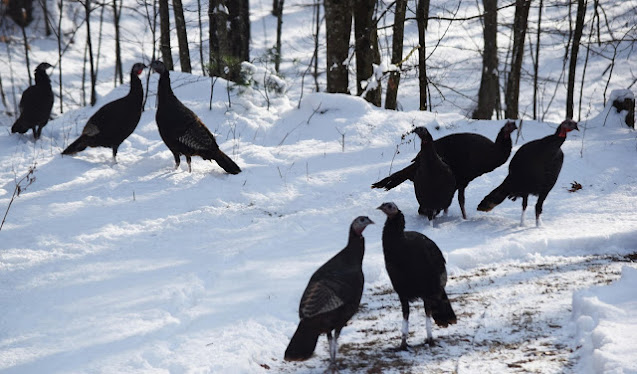 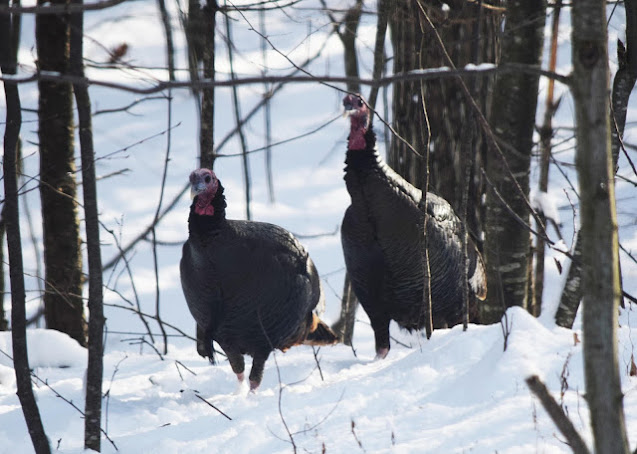 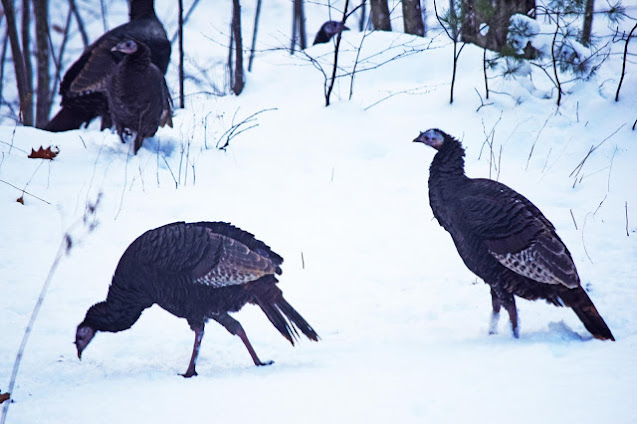 Every time they visit my yard, the dogs bark if they are aware of them. (The dogs are in the house because the turkeys don't come up into the yard when the dogs are out.) That of course sends the turkeys back into the woods. They were here  just the other day, but because of barking dogs I didn't get any photos.  I just saw them walking away in between the trees.
I've thought about putting out corn for them, but unlike songbirds,  Fish and Game doesn't encourage the feeding of wildlife like flocks of turkeys. Probably smart, but it must be hard for turkeys to get enough food when the snow covers the ground.
There is turkey on my menu today , but not wild turkey as there are no hunters in my house.   And I am grateful I get to interact with these interesting birds, among other things too.
Hope you are are thankful for something today and that you also have a wonderful day!
Thanks for visiting!

Your journal page is gorgeous, love the wonderful colours, well done. And thanks for the infos about the pilgrims. We all need to be more satisfied with what we have. Love the wild turkeys, we don't have them over here, pity! Have a wonderful day, stay well and safe. Hugs, Valerie

The history we were taught about the Pilgrims and Native Americans was glossed over. Your turkey page is very pretty. I like the oak leaves and acorns. I usually see herds of turkeys, but haven't seen them this year. Wonder what happened? There was talk around town of a bobcat sighting and my friend, Red, had a coywolf sit in her yard staring at her house! Maybe the turkey populations has been thinned by bobcats, coywolves, and coyote. Happy Thanksgiving to you and yours.

Lovely page and thanks for the information.
Happy Thanksgiving to you and yours 🧡🌾🍂

A beautiful page Erika!
Wishing you a very happy and joyous Thanksgiving with your family.
Alison xox

Your art page is gorgeous! I love the colours and the layout.

Interesting info on the Pilgrims. I always heard a different story of the Pilgrims and Native Americans.

It's so good to hear the wild turkeys are back in your area. We have a lot of Bush Turkeys here, particularly in the rainforest regions. Love them! It always saddens me to see so much devastating loss of life in the wildlife kingdom, mostly due to habitat destruction by humans, either for grazing lands, crops, or dwellings.

I hope you have a lovely Thanksgiving Day with your family, Erika.x

I'm not sure why I didn't link until now today. I certainly linked at Rain's. DUH.

Your synopsis of the PBS story about the Pilgrims was great. I had seen a similar one they did a few years earlier where a group of people set up a real colony with the same conditions as those who first landed. It was fascinating what these people who are used to modern conveniences put up with in order to recreate the first year at Plymouth colony. They brought their children, too, and some of the kids were NOT all that happy to be pulled away from their friends. It was also a fascinating show.

I LOVE your wild turkey inspired art today, dear. This was a great collage for Wendy's theme at AJJ.

I saw wild turkeys in southeast Kansas, but there are none in the area where I live. I think they need trees, which are sorely lacking in my area (in the country). Great shots of the birds, too.

Interesting, sad story about the Pilgrims.
As the birds.
And I wonder how turkey tastes like?

Love your turkey page, thank you. Not very keen on eating them though, we usually have beef for Christmas dinner. Have a great weekend.
Hugs Wendy

I hope it was lovely, Erika. A great post. And I love both your turkey piece and the photos, too!

Loved reading about the pilgrims. Before leaving the East coast we visited cape cod, (I felt at home there seeing the salt marshes0 Plymouth and of course living in Annapolis we visited Jamestown.
Imagine the hopes this group had for their adopted country (lest we forget they were immigrants)
We did not have turkey as we rely on whole foods delivery in covid infested Denver area, and none was available frozen starting in October.. but it was all good, some turkeys lived, I am sorry humans keep causing the extinction of so many species of creatures. Loved your pics too
LeeAnna

What a super post :)
Hope you had a Happy Thanksgiving.

Happy belated Thanksgiving! Lovely art piece. I didn't know that about turkeys in New Hampshire. I'm glad they made a come back. I've heard that there are more deer in New England than when the Pilgrims arrived, due to mankind killing off their natural predators. Coyotes are slowly making a come back now, so they kill some of the deer, but they are still overpopulated, at least here in CT. I don't know what the deer do for food in the Winter, either, just like the turkeys.