Hi everyone and happy Friday.
Today I have another page for Elle's language challenge at Art Journal Journey   that is about one of my wishes in life. That wish is that I would be fluent in at least one other language besides English. 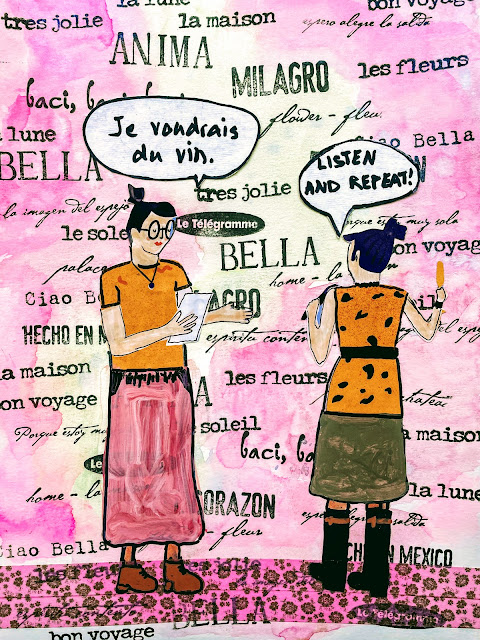 I did take 5 years of French back in my school days, and I can get by at the most basic level, but that hardly makes me fluent.  I just don't think I have as much an ear for language as some people do. Add that to the attitude I grew up in. My dad was a World War 2 vet, and  he grew up in a home with English as a second language. Being a man of the 1950's and the American post-war patriotism of that time,  he felt being American  meant speaking English. He never spoke his first language to us at all, ever, although I heard him babbling away with his mother and siblings often enough.  And my mom knew a few phrases of a few languages, but she didn't speak any other language.  No one encouraged me to excel at French when I took it. I'm not complaining, but I guess one of the flaws of being an American is that many of us  (but certainly not all) are not very multiple language savvy.
Those were different times and now speaking multiple languages has a much more important role in the world.
I made my page today by first stamping various  phrases in various languages using stamps I had. Then I used watercolors to make my background. I made a "floor" out of washi tape so the 2 ladies would have something to stand on.  The people are cut out of an old FLOW magazine, although they were only from the waist up, so I drew in their skirts, legs and shoes.  These were then painted. Finally I made some word bubbles and wrote in the speech.
I picked the phrase in the left world bubble  because after dealing with a languages class, I would need some wine. Probably a lot of wine.  Or preferably a beer. Smile.
Wishing you a great start to your weekend.
Posted by My name is Erika. at 5:39 AM

Faun and fabulous page. Great idea! I grew up in a family speaking English, Yiddish, German and Russian, which was sometimes rather challenging! At school we had to learn French and Latin, but I certainly liked French the best! Have a great weekend, hugs, Valerie

Ecoutez and repetez. My parents were first generation of their families born here. Italian was their first language. They were told to be American which meant speaking English. They didn't teach us to speak Italian. They spoke Italian to my grandmother and when they didn't want us to know what was going on. Enjoy the weather!

Beautiful. I love it so much 😍

Great page Erika! I love your wordy background!
Wish I was fluent in another language too. I can just about get by with my school French.
Happy weekend,
Alison xx

What a fabulous page Erika, I would love to speak more languages and as for speaking French - I can hold a conversation and I'm told I speak French well but I really have to concentrate - it doesn't come so easily. Of course by the time we get to the end of our trips (especially the longer ones) I am much better at conversing than at the beginning! I love how you extended those figures! Hugs, Chrisx

I came from a very British household, so the only second language I got was still English. I love your beautiful journal page, though. You got a LOT out of that Flow magazine. The ladies are sure engrossed in what they are doing. Thanks for sharing this with us using Elle's theme at AJJ.

I keep forgetting to answer your question about These Truths. Lepore is a historian. I didn't read it as a history lesson, but more for the fact Sally had the book and she was willing to loan it to me. She told me it had some remarks at the end about Trump, so that's why I borrowed it. I enjoyed it as a book on history, but that was not why I enjoyed it. Not sure it answered your question, but I found it was really enjoyable to read. She writes quite well, so that was a plus for me.

Languages, such a theme. I had to learn French and cannot learn Spanish as it´s too close - could´ve used the latter much more.

Another fantastic page Erika! I think we would all like some wine about now lol I love Flow magazine, I have a friend who sends me the international editions and also some of the Dutch editions if she thinks I'd like them. I don't speak Dutch but craft is an international language of its own lol. Thanks for joining me for the Language theme at Art Journal Journey this month Elle xx

I'm so glad to "ear" some French words in this blog.
I do speak French every day and maybe I could teach you. Smmile

I´m sad I learned French (I´m far from fluid, too!) - I could´ve used Spanish so often!
You stamped first and THEN made the background? I would expect the words watering up.
If you hadn´t mentioned I wouldn´d have noticed you made the lower part of the ladies :-) It´s perfect, also with the floor.
A wine, please. Or a beer, better a beer. Have a great start into the weekend.

Hups... please delete my comment, I already did, LOL. I had no wine, though!

First of all,I love this page. I need to memorize that line, too! It's fun, cheery, and yes, instructive!

I think it's appalling that America doesn't stress multiple language skills in school -- not just because "it's an elective" but because it makes the world and travel so much richer if you can communicate in at least one other language in this global world. I know I kick myself I didn't pay more attention to my high school French class. I'm always a bit embarrassed to travel and stumble over language (which, fortunately, I have a rick Steves phrase book for! I can ask the question but can't understand the answer!). Then they reply in English and I think, "we are so ignorant of the world!"

Ironically, I noticed the first comment, and I knew that phrase! (Although I had forgotten about it until now.) I know how to say good morning in German. I took Spanish when I was in school, but only the minimum required, which I now regret not taking more. But I do know an important Spanish phrase: "Donde esta el bano?" (spelling?)

Great assortment of photos. What a lovely place to visit. It's nice seeing the flowers blooming, after Winter.

(Note: I'm very far behind on visiting everyone's blogs, so I'm doing a quick pass through, and will try to catch up later.)

Oh Erika, I am exactly the same. I would love to be able to speak different languages but I can't and I cannot seem to learn either. I have tried numerous ways - evening school, tapes, tv courses etc. I don't get very far but then I forget what I have learned in a matter of days. I think we need to go and live in the country and then we will learn.
In the meantime I love your page, love all the language you are showing us and the conversation between the two ladies is brilliant. Maybe in our next life?
Hugs, Neet xx

I took French in school but never used it, so beyond knowing some words and understanding a few simple sentences I'm hopeless. I'd love to be fluent.

I love your fantastic page relating to the French language, I guess the wine comment will relate to many folk. We sure picked up on how to order a bottle of wine, just as quick as how to ask for a full tank of petrol for the car.
Srtay safe.
Yvonne xx