Hi there. I hope everyone is having a wonderful weekend.

Today I am sharing another page for Elle's language challenge at Art Journal Journey.  My topic today is pictographs and petroglyphs.

Here's definitions of each that I found on the internet.

A pictograph is a  pictorial symbol for a word or phrase. Pictographs were used as the earliest known form of writing, examples having been discovered in Egypt and Mesopotamia from before 3000 BC.

Cave paintings would be an example of a Pictograph.

And a petroglyph would be

a rock carving, especially a prehistoric one. 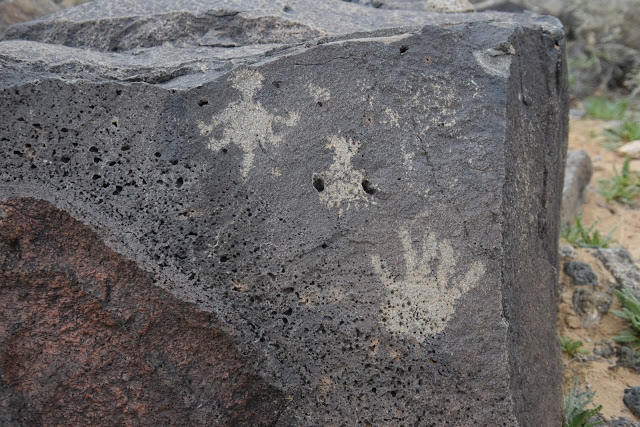 These petroglyphs were on a rock in Albuquerque, New Mexico at Petroglyph National Monument, where there are hundreds of these.

No one knows exactly what these symbols in my photo mean, but perhaps they were directions or information for ancient people traveling on well used trails.

Here's my journal page with lots of pictographs in the background.  Some of them were stamps designed from petroglyphs. 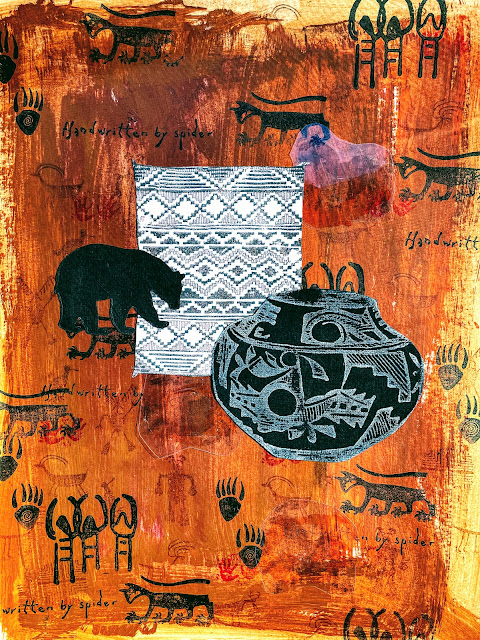 I painted the background with 3 tones of yellow and brown. I was trying to create a southwestern (US) rock looking surface. Then I stamped some images with red, brown and black ink. I tried to stamp a horse on acetate and add it for some texture, but it seems all you can see in the photo is the glare off the acetate.
The southwestern pot is another ancient stamp from my collection that I stamped in white on black paper before fussy cutting it. That is also true for the southwestern woven blanket image, but this time I stamped black on white. And finally I added the bear die cut, and I stamped the "handwritten by spider"  quote a few times on the page.  I was thinking that worked because some southwestern US Native American tribes have a story about the spider woman.
For the  Navajo people, Spider Women is a protector and helper to humans. In the Hopi culture, she can take on many shapes. When she is in her spider shape she lives in a hole in the ground. The Hopi and other ancient Pueblo people  had religious "holes" in the ground called kivas to mimic where Spider Woman lived in her spider shape. 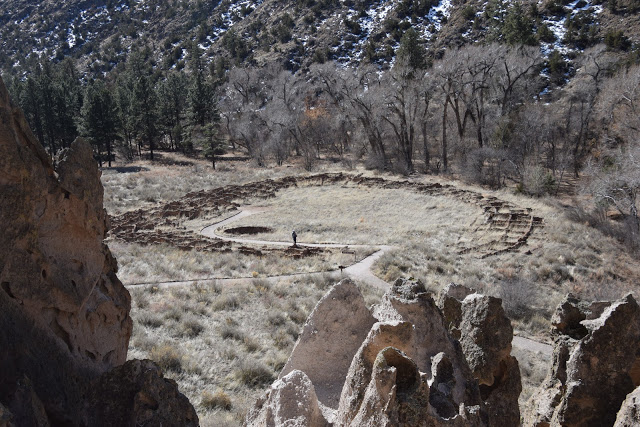 This photo and the next photo were taken at Bandelier National Monument outside of Los Alamos, New Mexico. This park preserves an ancient Pueblo people settlement that is believed to have been inhabited between 1150-1699 AD. This large round area in the above photo might have been a kiva, but in the photo below, the small round structure sticking up is the top of a kiva. I've visited here twice. The first time I was able to crawl down a ladder into the kiva, which is always below ground, but this second time in early 2020 I could not. 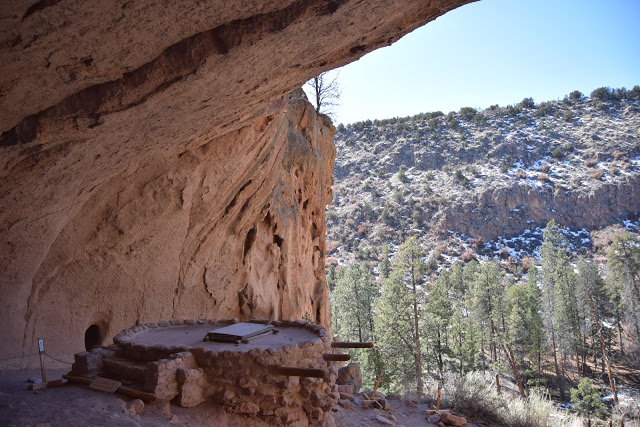 This is a very large sacred kiva in the next photo is at Chaco Culture National Historic Park in northwestern New Mexico.  The amazing thing is that at Chaco Culture these beautiful stone buildings were created  between mid 800-mid 1200 AD, although much about these buildings are still a mystery. 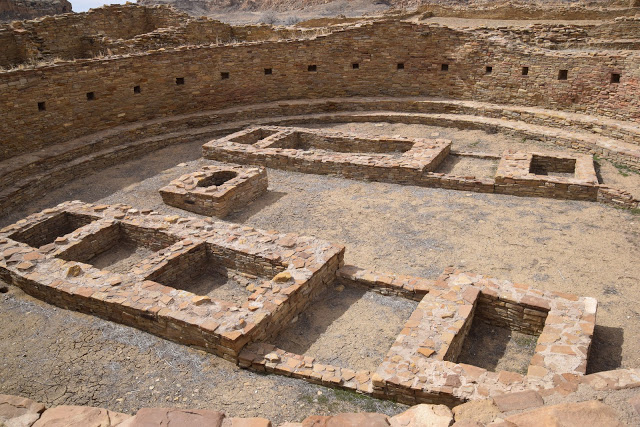 That's all for me today. It's been a busy weekend with yard work and other things.  We needed to get an electric fence up around the bees as they'll be here in a matter of days.  The nice weather has made everything green up, and also has also reminded me I need to get plants into the ground. I feel like I am a little too much in homesteader mode right now, but hopefully, after today I should be caught up  with the preparing the gardens and beehive mode and just into the normal maintenance mode.
Hope you're also having a nice weekend and some beautiful weather also.
Thanks for visiting.

Very cool page and blog post. Interesting information on the glyphs and kivas. Also a mystery as to what the buildings were used for. Another glorious day on tap. I hope you get all your gardening done before the thunderstorms arrive.

Good morning Sunday I love and enjoyed this post so much thanks for sharing those photos and I love love your journal page-perfect for the theme. this was really a neat theme to interpret in many different ways

I've never been out west, but I'd love to see these in person.

It always amazes me when I remember that bears are a danger folks need to consider in their own yards. I hope the electric fence is effective. I'm excited about your bees. We're getting honey bees on the patio for the first time in forever, and they make me happy :)

We're getting sunny weather with highs in the low 90s here with rain predicted for Wednesday. Spring is a wonderful season :) Well, they all are lol, but I tend to like best the season I'm in ;)

What a fantastic post and gorgeous page Erika! I love the background color and all of the different images, that southwestern pot is gorgeous. Awesome photos too, I've been to Bandelier National Monument, it's such a beautiful and amazing place.
Take care, Tammy

What a fabulous take on language, Erika. I would NEVER have thought of these, but since you are so into these anyway, it appears they come naturally for you. The stamps you used are wonderful. I am in total awe. Thanks for a very inspiring entry for Elle's theme at Art Journal Journey, dear.

You chose a fascinating theme for your page today, and I love the colours and images on it. The photos are wonderful, too, that's another place I would like to visit. Have fun in the garden, you must be excited that the bees will soon be arriving. Hugs, Valerie

Interesting your post about these signs on the stones and a great, beautiful journal page.
Great, interesting photos from the park and thanks for this information.
Have a good gardening job, hug Elke

Hi just so you know, before I saw your comment I had deleted that post-decided it was kinda of dumb post haha but I did find that interesting that the schools are no longer having the class rings.--I wasn't sure of your email so thought I would comment here-just delete it

You certainly created a rock surface with your painting. It looks very realistic and I love all the drawings you have done on the surface. The three main images all link together really well and provide a point for the eye to be drawn to before vision radiates outwards to all the petroglyphs.
Thanks for the photos and information - it must be exciting to visit these places.
Hugs, Neet xx
ps sorry but I have had loads of Spam 186, 171 then 124 over two days and inadvertently deleted your comment on my last post. So sorry, I tired but could not find out how to get it back. x

A fascinating post Erika! I love your page and photos!
Alison xx

I remember being fascinated by your NM post (and that climbing and all you did!) These are so intriguing. Your art piece captured the feeling well.

A wonderful informative post as well as a super inspiration page for Elle's theme. I have learned a bit about your countries history today.
Stay safe.
Yvonne xx

Oh how exciting! I love your page and all the photos. No one has done a pictograph page yet, so I love that you came up with that one. Thanks for joining me for the Language theme at Art Journal Journey this month Elle xx

Very interesting and instructive post and your own journal page is amazing!!
I love your pictures! They increase interest in the whole planet,
how much is yet to be seen and inexperienced!
Nature+time.... they makes a miracles on the globe!!