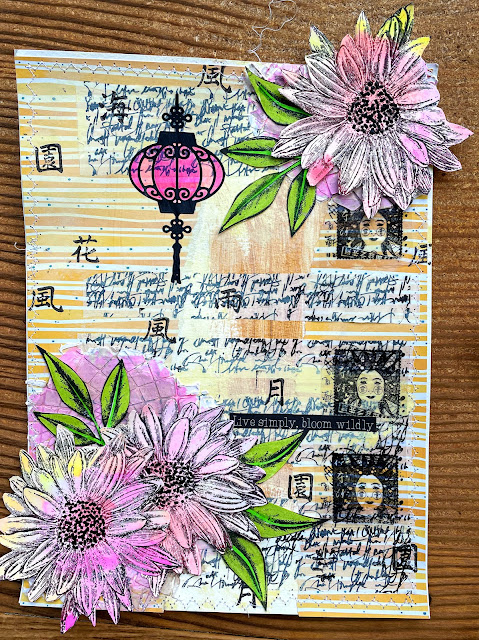 I was playing with yellows and pinks to make my Japanese inspired page today. I stamped some kanji words on my page too, but I don't know what they mean.
There are 3 traditional written forms of language in Japan. Kanji are the symbols taken from Chinese (called hanzi in China) and are commonly used in Japanese writing. The other 2 forms are hiragana and  katakana. They are all made of various lines to create symbols which are the "words" of the language. I don't know what each symbol means, and you may wonder how I know my stamped images are kanji. That's because the set I have says they are kanji. Smile.
I know when I visited Japan, I learned that speaking Japanese was easier than I thought. Not that I speak Japanese other than a few phrases.  Because I'm  limited to English and it's Latin letters that have specific sounds, I don't know how you would pronounce these "lines" that make up the written symbols. They look beautiful, but how would you say them? When I saw a written word, phrase or sentence,  it seemed way too complex to have a simple verbal pronunciation.
I am sure people from non-Latin letter language places might have the same misconceptions (as I did with Japanese) when they see English, French, Spanish or other Latin letter language written out. It also makes sense that people can sometimes speak a language but not write  or read that language.
The longest phrase we used in Japan was You're Welcome.  There are many ways to say that phrase, depending on who you are speaking with.  The formal way to say it, which is what we as visitors would use, is written like this in Japanese.
「どういたしまして」
To pronounce this you would say ( this is not a true phonetically written break down but hopefully it works)
doughee tashee maw she tay (say it as one word, not several words)
Try to say that fast 3 times. It didn't roll off our tongues very easily at first, and we teachers all had a good laugh practicing it. (The kids at this point were living with their host families.)
I am linking this page to Elle's language challenge at Art Journal Journey.
Have a great start to your weekend.
Posted by My name is Erika. at 8:22 AM

That was really interesting Erika, how fabulous that you have visited Japan, I would really love to go one day. I would also like to learn Japanese but it does seem quite difficult with the non-latin characters, I feel like I would struggle to get past the few words that I can say (but have no idea how to read or write them lol). I love everything about your page, from the stitching to the stamps to the flowers and that gorgeous lantern. Thanks for joining me for the Language theme at Art Journal Journey this month Elle xx

Hello Erika,
your page is beautiful!
Thank you for the nice comment of my bees. I do remember the fun photos from hives you posted about a your ago. You and your husband were there, too :)
Hugs xx

Hi Erika, a fun post today, and I'm repeating that phrase over and over again. I don't think I will ever get to visit Japan, but we have a very large Japanese population living in Dusseldorf, so I might need it some time! But the Japanese Day here has been cancelled due to Covid, pity, it's always fun to visit! Love your pretty page, great colours, too. Nice that you have Japanese stamps. Have a great weekend, stay safe, hugs, Valerie

It is fascinating to read about the languages and symbols of Japan and see your fascinating journal entry honoring them. I agree that some people can speak a language, but not know how to read or write it. I love the flowers you colored, too. thanks for this beauty you shared with us at Art Journal Journey using Elle's theme.

Why is red bellied woodpecker called Red Bellied?
Many people will ask why it's called a Red-bellied woodpecker because they fail to see the red on the belly which is a faint round spot about the size of a quarter. If you get them at your feeders watch closely and you will see the red spot. The call is distinctive and very unlike the Downy and Hairy woodpeckers.

A beautiful page Erika! I'd never really thought about how different the languages are. Japanese people must have a hard time learning English. Hats off to them!
Happy weekend,
Alison xx

The only time I see Japanese writing is in Sumo coverage :) I love the pretty pink flowers in your piece.

The kanji actually don't stand for words, but for syllables. I learned Chinese at university (I have a Master's in Chinese Studies) and it is hard in the beginning. However, eventually you recognize certain "base" characters, so-called radicals and with those you can find the characters in a dictionary. So you look for the radical in a character, then count how many extra strokes are in the character itself and then you can found the character with all its combinations that form different words. An additonal difficulty is that Chinese is a tone language and depending on the intonation a syllable could have different meanings. I also tried to learn Japanese, but mixed up the pronounciation with the Chinese and stopped after several weeks. I never got beyond "Kore wa sakura desu" (and of course the u in "desu" is silent - too much to remember!).
Your page is beautiful. The pink and yellow go very well together.

Lovely page. Flowers have a spoken language, too.

how pretty and detailed. Life is in all the small choices made of what to combine to make the whole.
I taught English to a Japanese family living in Florida... they always wanted to feed me and visit after so I always asked them to teach me some words in Japanese. Spoken it is easier than one might think, but the written is so different it would take a tremendous effort to learn now.

I love the page and the notes on Japan. Rick studied Japanese for a bit and he can (or could, I'm not sure about now) read some of it. When we went I freaked because I was afraid to separate from him, since I could read NOTHING! He says when you get your brain around it, the kanji make sense but my brain is obviously not around it yet!

A beautiful page, the colours are perfect.

Beautiful work, love the colors, oh, so "springy"! and wow, now I can welcome someone in Japanese - sadly here we have many Chinese students, though, LOL!
Many of them came to our flat, as my host spoke Chinese fluently.

Just yesterday Ingo got Japaneses knives, and we have no idea what´s written on the beautiful boxes!

I'm late calling in to read this post and have to say getting a bit tongue twisted trying to repeat the welcome words you shared with us today. Its a fantastic page and must have brought back memories of your trip away.
Stay safe.
Yvonne xx

Such a pretty page with all that pink against the yellow background.
How wonderful it must have been to visit Japan and stay with a family. It is a country I regret not having visited and to visit in blossom time must be truly wonderful. Ah well, will put up with the films I see.
Took me a while to say 'welcome' in Japanese but thanks to you I can now manage it (if I am reading it on your page).
Hugs, Neet xx