Hi everyone. Happy last day of February or first of March, depending when you read this. I am glad February is ending, even though it hasn't been the worst February I've ever experienced.  Let's keep our fingers crossed March will stay a little bit warmer with a nice gradual (but fast if that's possible) snow melt for those of you with snow.

Let's also keep our finger's crossed this mess in Ukraine will end soon with Ukraine remaining a sovereign nation. It has all been so needless all for one power hungry man's ego. I am posting a couple of photos from last summer as I read  (first on Jeanie's and then a few other places) that sunflowers are flower of Ukraine, and posting one shows your solidarity. 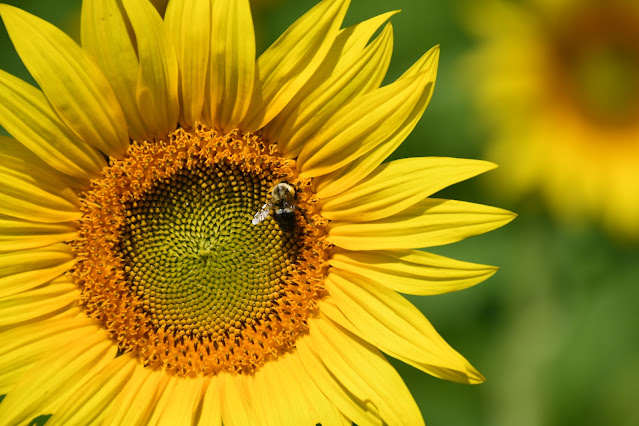 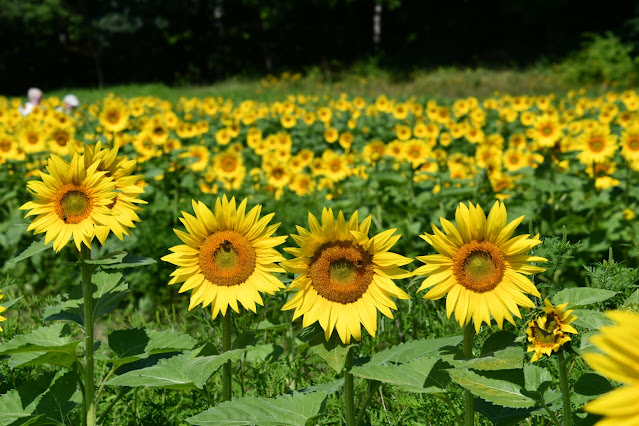 Happy T day also. On Tuesdays we join Bleubeard and Elizabeth and share our drink related posts over at  Bleubeard's and Elizabeth's blog.

I really don't have a lot to share for T this week, but I do have some beach photos from earlier in February I thought I could post.

These first  few are from a couple of weeks back when we were having a gorgeous 40 degree F (around 4.5 degrees C) day. I know for some of you this temperature would be cold, but for those of us in the north where we've had many days of well below freezing, this day was wonderful. You can see in this first photo there was still some snow left from a big storm we had recently had. 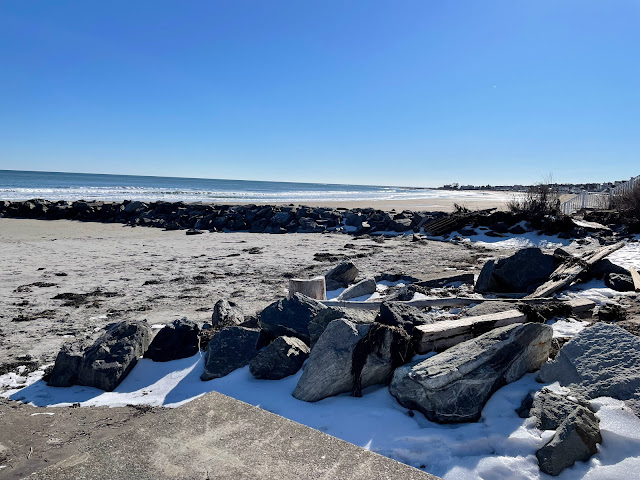 The storm that brought the snow did a lot of beach damage because there were also really high tides at the same time. The moon was in its phase (either full or new moon-I can't remember which) when these high tides are called spring tides, plus add the extra energy in the sea from the storm so the high tide water levels were really high.
You can see the seaweed and some wood scraps that washed up over sea wall  near the beach house at the state beach. 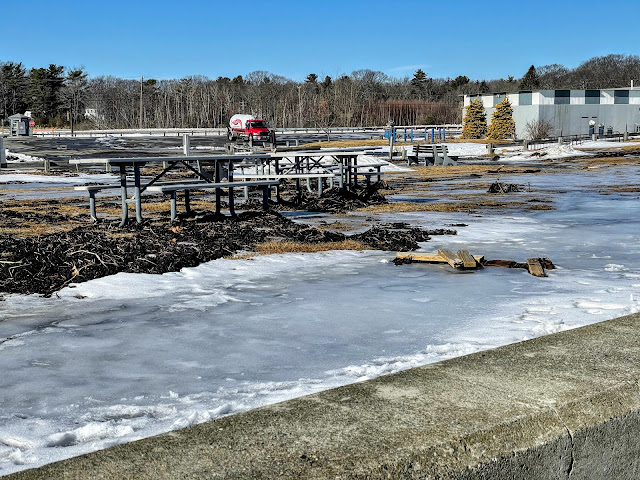 The other big damage was there were several pairs of stairs that obvious got ripped off of people's properties and washed into the state beach. This next photo shows 1 set of stairs that got washed over the sea wall. You also can't see in this (above) photo that there was seaweed all the way back to where the cars are parked. The tide normally doesn't even go over the seawall, so that was one giant tide.
And here's some stairs that got washed up onto the rocks below the sea wall. 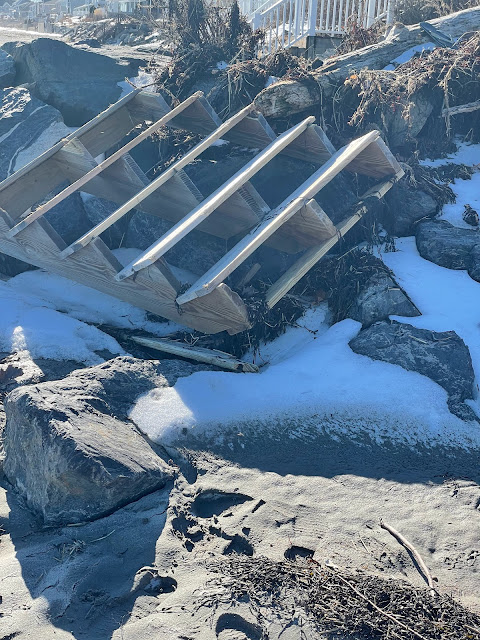 Last week we had a gorgeous day on Wednesday, and this time it was close to 70 degrees F (21 degrees C). A  walk at the beach meant you didn't even need a coat. I met my friend, and I brought along Maddie and Pete, because they could use the exercise too. 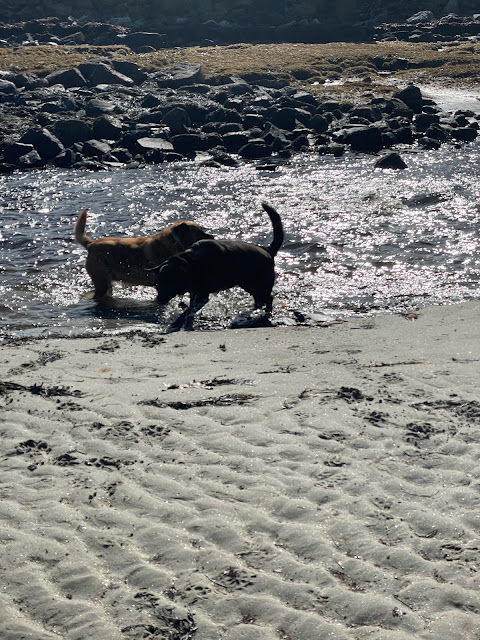 Of course they decided it was warm enough for a swim. Good thing I had a towel for them in my car, plus some old blankets on my seats. When the sand sticks to their wet fur it takes awhile before it all falls off. Smile.
After our morning beach walk my friend and I went out to lunch.  Covid numbers are down here so I decided it was time to enjoy a few things again, or at least before the next variant sends us back into isolation. (And I also knew my friend had been testing for covid several times over the last few weeks because 2 of her grandchildren  had ended up being positive, but all of my friend's tests had come back negative, and the grandchildren had once again tested negative and were back in school.)
You can  also see the restaurant (at least in this view) was pretty empty. 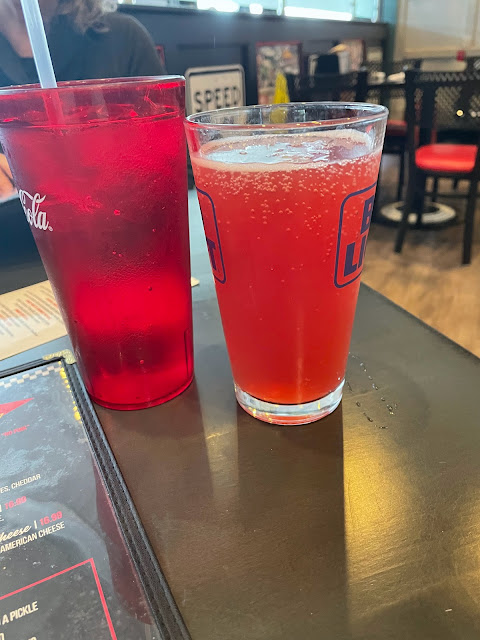 I have a double shot for my ticket to T this week. On the left is the water they brought us at the table, and on the right is a blackberry cider I had with my salad. I'd never had blackberry cider before, but it was delicious. A mouthful started sweet and then you got that just slightly tart punch of the blackberries. I would definitely order this one again. Plus it is a great color.
That's about all that is new with me. I've been watching snow melt and then come back again when we had a good sized snow storm last Friday. And I've been working in the spare bedroom/craft room/ studio redo.
Thanks for visiting my blog! Have a wonderful new month and Happy T day too.
Posted by My name is Erika. at 8:05 PM

Oh the blackberry cider sounds delicious, that's a shame all those steps got destroyed on the beach houses. allot of cleanup on the beaches too.
I just learned about the sunflowers and Ukraine I stand with them as well.
Happy T wishes and new month ahead hugs Kathy

I love all the sunflowers to honor the Ukrainians and their struggle against the invaders. I also love that sunflowers are actually native to North America, where the American Indians cultivated them for thousands of years before the Europeans arrived here. The Ukrainians now grow the most sunflowers of any country. I hope the war ends quickly with a minimum of damage to their country but it doesn’t look like that will happen.

Blackberry cider sounds delicious and refreshing! Glad that you were able to get out and about again.
The tides certainly leave a lot of debris behind. I always visit the beach in beautiful weather so I don't usually see this side of things.
Beautiful sunflowers! We are praying for all those in Ukraine suffering at this time.
Happy Tea Day,
Kate

You had quite the winter storm! I can totally understand that 40 F doesn't feel cold after your freezing temperatures - I always felt the same when I was still living in Germany. Nowadays I'm a spoiled Californian after having lived here for more than 20 years.
As you commented on my blog, the world has certainly gone crazy. I worry about the war in Ukraine and what will still happen. Let's hope and pray for a good outcome.

beautiful sunflower photos. Such sad times again though...
Yes, the crazy up and down temps can be maddening but it is good to take advantage of the warm (who would have thought we'd think of the 40's as warm:) days- and what better place than at a beach. Lucky you! Too bad about the storm damage though.
Looks like Maddie and Pete enjoyed the day at the beach as well. Cheers, and happy T day!

Beautiful sunflowers which have me long for the summer! We had 3 or 4 storms last week too, luckily, they didn't cause too serious damages.

I keep mentioning that sunflowers are Kansas's state flower, so I feel an even deeper connection to Ukraine. I really MUST find a sunflower to add to my blog post, too. That means I must keep this short and sweet. Sounds like there was a lot of devastation on the coast last week, but the dogs seemed to be having a lot of fun together.

Your blackberry cider sounds delicious. I grow blackberries, so I may try to make cider this summer if the birds don't get all the berries. The color is great, too. Thanks for sharing your trip on the coast and your blackberry cider with us for T this Tuesday, dear Erika. I'm off to find a sunflower.

Yes, it is such a beautiful sight, those sunflowers, such a stark contrast to what we see in the news.
Your dogs are tough, LOL!
Blackberry, I would love to try that, too!

Happy T-day and to warmer temps :-)

Lovely flowers, fun beach pictures (especially the dogs), and interesting things along the shore. You live in a very beautiful and interesting place, Erika. Glad you got to go somewhere fun for a drink and food - sounds yummy! Stay warm - Spring is almost here! Happy T-day. Hugz

Happy Meteorological Spring! :) We're getting highs near 70 and sunshine this week, though it'll be much colder and rainy this weekend. Spring really is here... here, anyway lol Happy T Tuesday

wow, the amount of damage to the beach from the storms. I think I heard it was a New Moon. Such nice weather, a tease of the warm weather to come. The puppies look like they are having a good time. A warmup for the rest of this week. Hopefully, the snow will all be a memory. Blackberry cider sounds interesting. Happy T Day 🌻

Sunflowers are such a lovely tribute - wonderful! It's great to see that the snow and ice is melting away, I hope the thaw and that the warmer weather continues 😀. Take care and Happy T Day! Hugs Jo x

Your sunflowers are so beautiful. I hope the same, though I'm terribly worried. And thanks for the shout-out!

Looks cold there! We were actually in the mid-40s today. Things are looking up. Of course, we all know it's March so I won't get cocky!

The Cider sounds delish. Yes, the beaches always have clean up. Several of the coast towns here take the garbage and create art from it. We are in nonstop rain. uhhhggg I need sun. LOL Have a great day.

Yes, I think everyone has sunflowers on their blog. It is a fitting tribute.
Your blackberry cider sounds delicious. I would try that too if we had it here.
That must have been some storm! Spring tides are notorious. In 1953 half of the Netherlands flooded during a storm combined with a spring tide.
Happy belated T-Day,
Hugs,
Lisca

I love how blue the sky is in those beach photos, but looks like that storm did some damage! Not had blackberry cider before but one thing they serve here is regular apple cider with a shot of blackcurrant cordial in it, maybe that tastes similar. Happy belated T Day Elle/EOTC xx

I love that you have the sunflowers here - the news coverage is showing such dreadful things happening in Ukraine. Your beach photos are beautiful but the storm damage certainly shows the power of the sea. Blackberry Cider sounds fabulous! Happy T Day, Chrisx

Hi Erika, just catching up with you and sorry to be so tardy. Oh what a glorious sunny sky and beautiful beachy blues you have up thar! The cider looks refreshing, xoxo