Hi everyone. Hope everyone is having a nice week.

Today I have another page for Art Journal Journey and Elle's Language challenge. 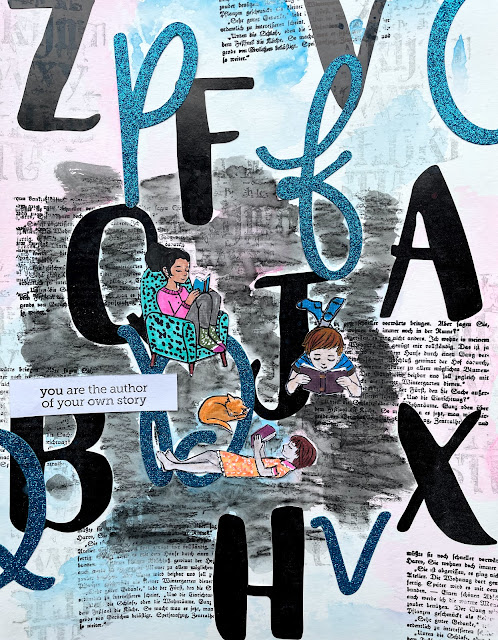 Depending on what language you speak,  it might has some kind of letters or written shapes. When I looked up spoken languages, I discovered that more than half of them have no written form.
At  Language Hotspots from Swarthmore College, I discovered this interesting list of info about languages.
It was a really fascinating read, and if you have the time or interest it is worth checking out.
Language allows us to tell stories. These stories may be passed orally from person to person, or they may be written down. My page today is about written stories.
Written letters or shapes may not be Roman style ones like I used on my page, and they may not go from left to right or even horizontal across the page.
I used lots of letters on my page and stamped some vintage text too. I liked the kids reading that I added to the page also.
I wonder what language(s) their books are written in. And I wonder what stories they are reading.
That's all for me today. Tomorrow I will be back with my monthly book post, so if you are interested, you can see what stories I have been reading.
Thanks for visiting.
Posted by My name is Erika. at 5:43 AM

I know that we're losing languages, which I think is tragic, but I had no idea that more than half of the world's languages and 80% of African ones have no written form. Every once in a while there'll be a little news story about the last speaker of a language or about the few remaining speakers of a language trying to save it. It's a fascinating subject.

This was a fascinating read. I had NO idea that spoken languages did not necessarily match up with written languages. I am in awe of your page and how you used those little images to help tell the story. Thanks for the language lesson and thanks for sharing this great entry using various language letters with us at Art Journal Journey using Elle's theme, dear.

Well, I red your list and recognized a part of it amazing. Thank you for a big job and the information.
Your page is wonderful. I like how you give the letters the head role and the reades are very nice being there in a small size.
Have a great time xx

I love how you made your journal page, with the bold letters, and the list from Swarthmore College is very interesting. So many languages and dialects in the world. Where would we be without the means to communicate? Have a great day, take care, hugs, Valerie

This is fascinating! Thank you for sharing and a beautiful page as well!

That is interesting. Thanks for the link -- I might skip over there!

They all look very cosy with their books! Great page Erika! xx

I love this page. I don't think as many children read as used to - I was talking to hubby the other day about how much the time I used to take choosing my books from the library when I was younger. Love those language facts! Some of them are quite shocking! Hugs, Chrisx

Your page reminds me of some fabric I saw for a chair I was thinking of getting, actually having reupholstered. Really fascinating facts about language. I hope you got to enjoy the sunshine today.

Unreal - What A Post And So Appreciate The Facts - Difficult To Wrap My Mind Around 7,000 Languages And 14 Day Per Day - And Yes, Languages Allows Story Telling - Again, Fascinating Post - Well Done

Cute spread and interesting facts about languages. I'm sure there are plenty of non-studied languages in the world too between best-friends or say twin siblings etc that aren't recorded :)

What interesting facts and your page is fabulous! Loving all the different types of letters in the background - gorgeous 😀. Take care and happy wishes! Hugs, Jo x

Great page , i liked the colors and images , congrats 👏👏💐
Hugs and blessing 💐😊

I love your page Erika, there's so much to look at, and I love the kids reading books and the kitty (of course lol). Thanks also for all of that information on language. I looked up quite a lot when I was deciding on the theme but from a different source so different info. How sad that a language dies every two weeks :( Thanks for joining us for the Language theme at Art Journal Journey this month Elle xx

This is a great journal page, Erika, about languages. Those statistics are fascinating. LOVE the kids in the many reading positions of kids and that they are among all the letters and texts. And there’s got to be a cat , perfect!

Wow, Erika, that is all so very interesting and kind of scary to know some languages are disappearing. Also so scary that most people are bilingual and I am not. I feel like this is shortcoming of mine I should fix! Wonderful page you did - -love the kids reading and your fab focus on letters. Thanks for sharing all this. Hugz

I love this page - the black lettering is so striking against that pastel background and i do like the little figures you have included for interest. they add just the right amount of colour to the page and also send out the message with them reading.
Very interesting research you have done to Erika, makes for deep thought. Wonder where language stops and dialect starts?
Hugs, Neet xx