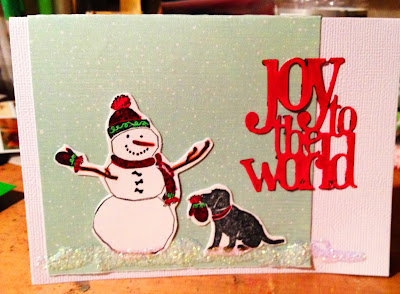 Not sure card making is my forte but the college girl loves getting mail at school so I'll go with that.
This one looks better in real life than in this photo- a bit washed out and in the poor seasonal light- it has a bit of a yellowish tint. The snowy paper has a great sheen to it, which doesn't show up here at all. I left the doggy a bit unsolid black because to me it looks like some snow on his coat, just like a real dog in the falling snow would look.
Words are from a Sizzix/Tim Holtz strip die. Snowman and dog are from Cornish Heritage Farms-an old rubber set not a digital one. I added some snowy background paper and then some white sparkley Stickles to make the snow which had fallen on the ground
I could have done some more sparkley snow on the snowman, but decided sometimes its just too much. Over doing it doesn't often make it better. 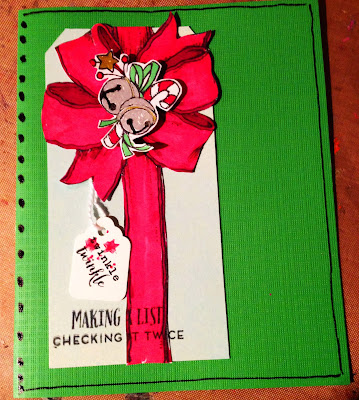 So here I made this tag using the bow stamped images (Flourishes Rubber Stamps) and then the words from October Afternoon. Just attaching the tag to a bright green card is all it needs- I think-in a sweet and simple kind of way. 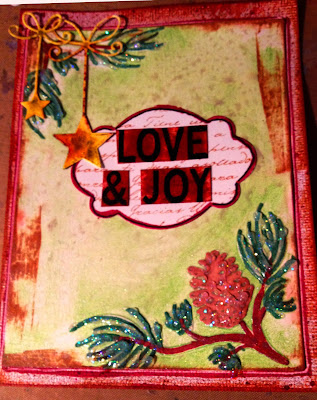 And lastly, this rustic style (bit masculine maybe too) wintery card where I started by using this Dee's embossing folder. I colored the embossment (is that a real word?) and then added white Stickles to make it looks like some frosty snow. I added the die cut hanging stars (Memory Box) and also the center tag die cut. The saying is from a big Memory Box holiday stamp-I stamped it all and then cut out the words. Add some outlining, some inking, and there you have it.
3 easy and simple cards.
A little early December holiday spirit.
Afterall, it is only 3 weeks until Christmas.
Man, shocks me as I write that.
Anyhow, have a great hump day.
And thanks for taking a minute to stop by my blog.