T Stands for a Day Out

Hi there folks. Happy T day. Time where we  stop by Bleubeard and Elizabeth's blog and share our drink related posts.

Yesterday (Monday August 24) my daughter took a vacation day from work.  We decided to do something fun and summery, and so we made reservations to go the beach. New Hampshire only has 18 miles of coastline, but in that area there are 5 state parks, some large, some small. We chose one that isn't particulary large but is a bit more "isolated" and is harder to get to if you didn't drive there.

Some parks are requiring reservations this year to keep the numbers of people down with Covid-19. They have limited the parking to 50% of the spaces, and from what I could tell, it worked really well. 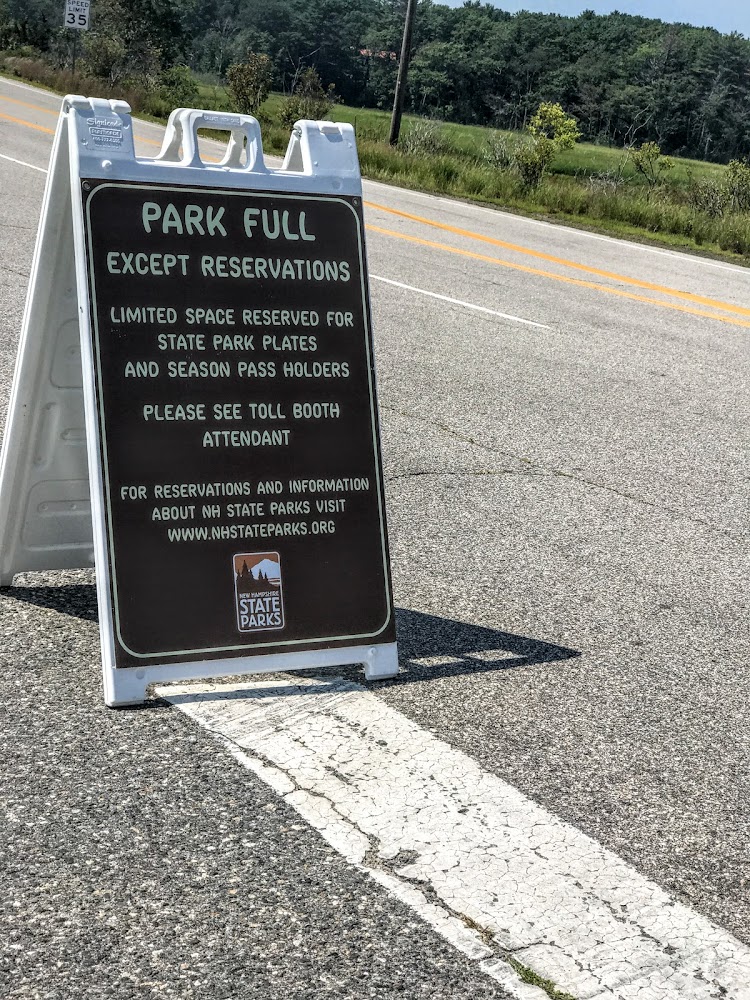 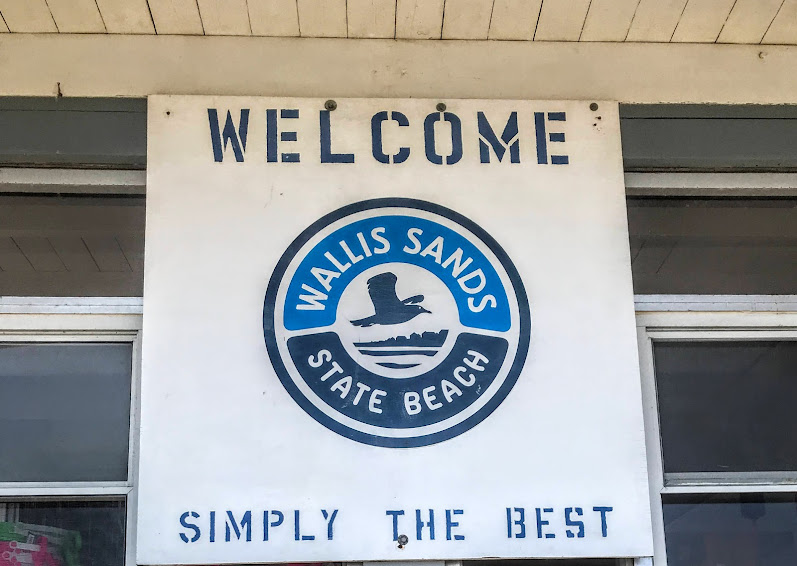 This is the days "stats" when we arrived. 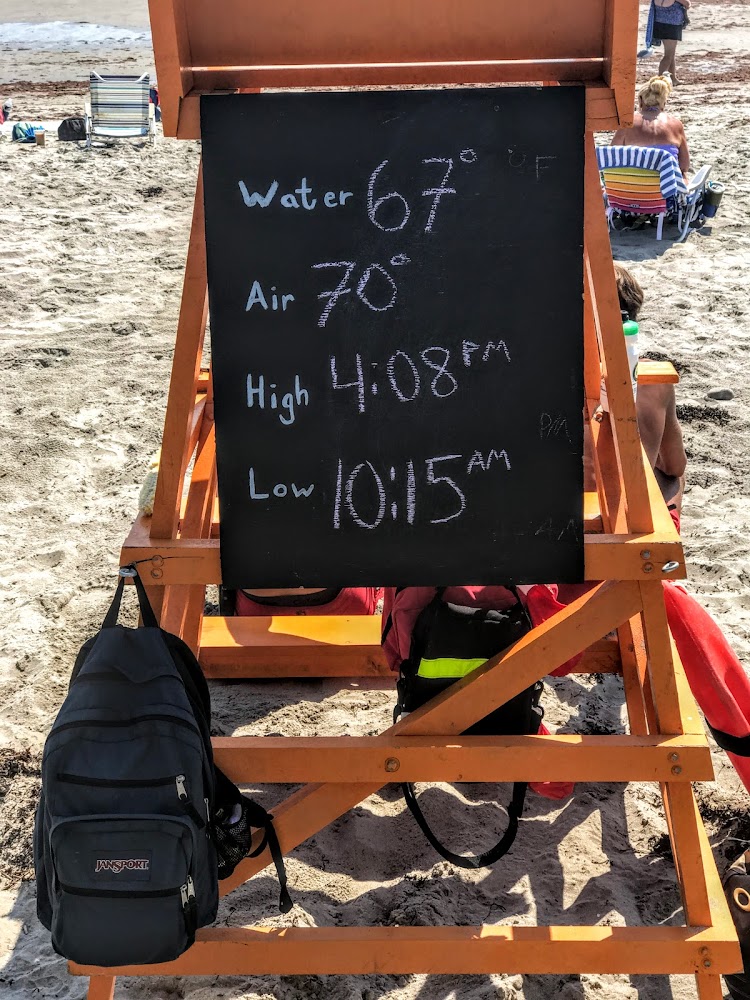 We arrived pretty early, around 9 AM, and at that point the sun was still burning through some clouds. 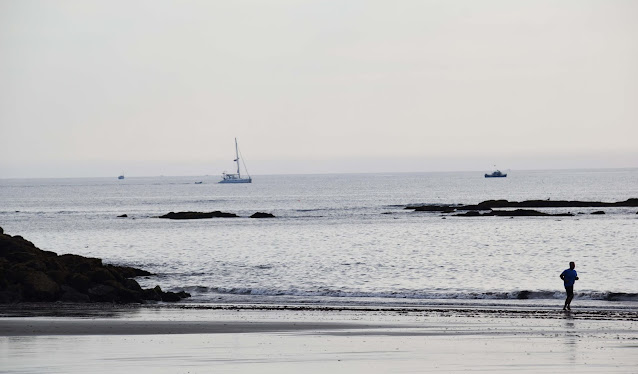 The sun did burn through and it ended up being a beautiful day. But I actually liked the view  and the light early on. 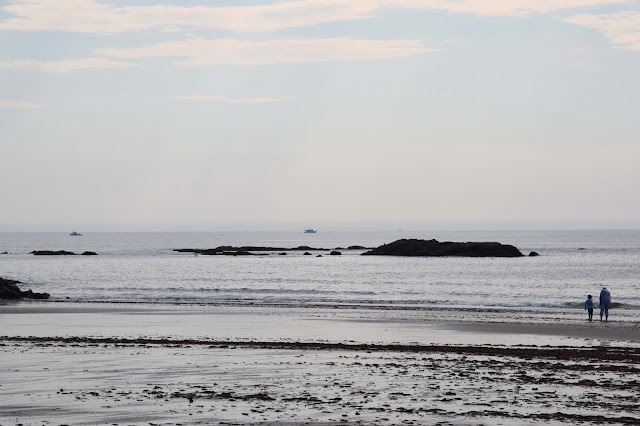 But here's a different view just before we left around 12;30.  We both had had enough beach time by then, and it was starting to get quite warm, since our temperature rose into the low 90's (degrees F), almost 33 degrees C. 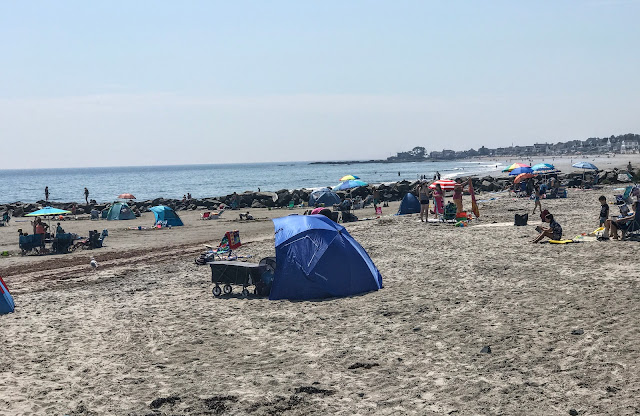 And we needed lunch. So we went and tried a restaurant I had heard a lot about and had driven by about 1000 times.

Here's what we both had for lunch. 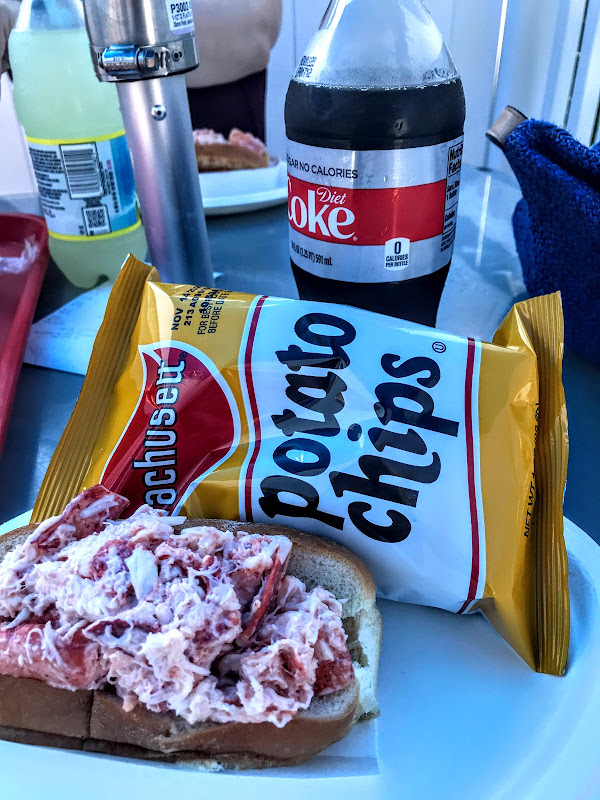 You can see I had a Diet Coke for my drink. And here's where we went. 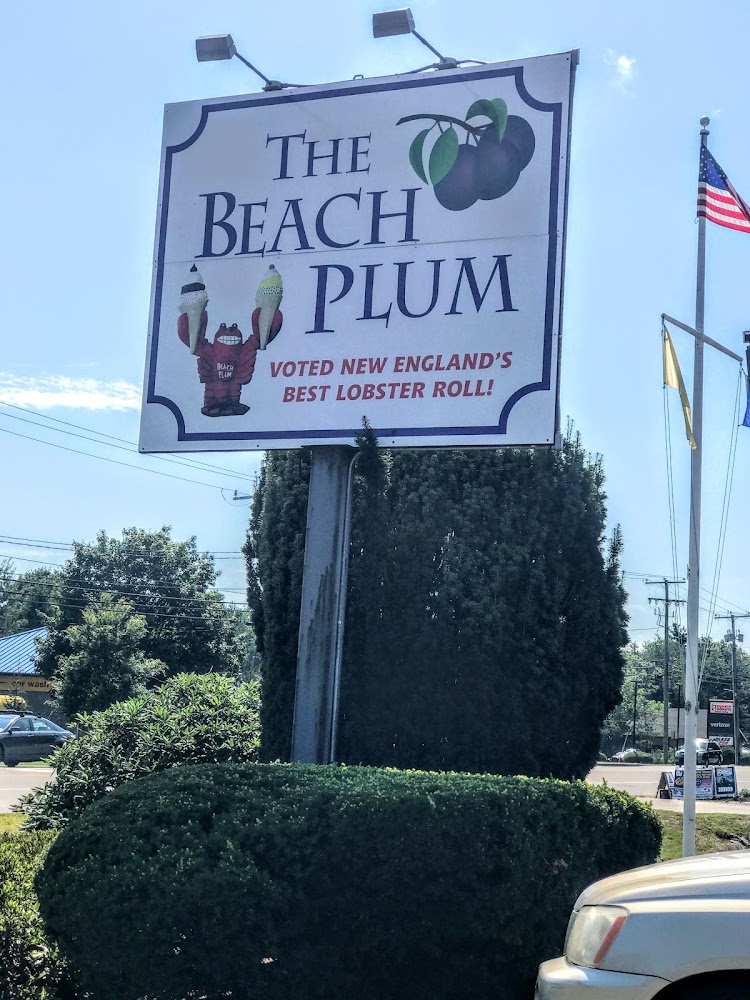 Although our lobster rolls were very good, my daughter and I both agreed we'd had better. And they were a bit pricey, considering they came with chips and wanted almost 3 dollars for French fries. It was a fun lunch however, but I won't rush back. And they aren't the best lobster rolls in New England like the sign says. (For the less money at Pop's where we usually go, you get more lobster meat and French fries)  But then again, at least for whatever my opinion matters, its pretty hard to find a bad lobster roll  my area. And it was still a yummy lunch after a morning at the ocean.

And that's my post for today. Hope you have a great T day.

And thanks for visiting my blog also.

Wow, I would really love a New England lobster roll! I know the lobstermen are having challenges selling their fish this year, but we still don't get it in that form in Michigan -- also, I'm only eating what I cook in my own kitchen with few exceptions.

You are lucky to have such a nice spacious beach!

wonderful idea-to have fun at the beach-and good idea to go early and leave before more people and too hot of a sun. we haven't eaten out in at least a year now. we don't eat much anyways but is fun for a treat. always fun to try out a different restaurant.
Happy T wishes Kathy

Looks like you had a wonderful day out, glad your daughter was able to be there, too. I would love to go someplace else, but no chance just now. Happy T Day, Valerie

Wow Erika, I loved seeing the beach early in the day, but it still looked like a lot of people were there. I had a JanSport backpack exactly like that one all through my undergrad through grad school days, so that was a nice memory. Looks like the design hasn't changed, either. At least you got to spend the day with your daughter.

Sorry your lobster roll wasn't all that good. I probably wouldn't know a good one from a bad one, but I WOULD be influenced by the price. Thanks for sharing your "day" at the beach, your lobster roll, and your diet Coke with us for T this Tuesday.

Oh, that really does look like you had a very lovely day!
Please keep such pics coming, I so miss the ocean!
Oh, when will this craziness with "Corinna" be finally under control?
Now I´ve seen so many lobster rolls I think I´d be ready to try one! Is it all ready to eat, I suppose? Happy T-day!

Such a lovely and safe way to spend a day!

Looks like a nice beach. I've never been to Rye. It was either Salisbury or York Beach. Nice that you got to spend time with your daughter. The lobster rolls looks good despite being pricey and no fries. Enjoy the day and Happy T Day.

It looks like you both had a wonderful day at the beach Erika! Great photos.
Alison xx
P.S. The last time I tried to get onto the AJJ blog, it wasn't letting univited readers in. Someone needs to alter the settings I think. I emailed Elizabeth, but haven't heard back.

I could have guessed that you would have a lobster roll. It looks good to me, but then... you are the expert!
I'm glad you had a nice day with your daughter. The beach looks nice and not overly crowded. (so the system works well).
I have just deleted the photo on my blog. It worked. I don't know why it didn't before, as that is the first thing I would have tried. Oh well... Thanks anyway.
Happy T-Day,
Hugs,
Lisca

I'd even take a second rate lobster roll if only I could get one! But oh, if I ever get to your part of the world in the summer, we're going to Pop's!

What a wonderful way to spend a vacation day! The beach looks so relaxing and it must have been cooler by the sea with the breezes too 😀. I love lobster rolls too, so yummy! Sounds like the perfect day to me! Wishing you a very happy T Day! Hugs, Jo x

Their management of the beach area sounds like a workable solution. Lobster roll there sounds like BBQ here in Memphis. Even bad Memphis BBQ is good ;) Happy T Tuesday

It sounds like you had a lovely outing. Like you said, it's pretty hard to find a bad lobster roll where you live. I had success making Caribbean lobster taste just like cold water lobster. I'm very excited to try again and make lobster rolls!

I have never had a lobster roll. Every time someone talks about it I feel like getting on a plane and flying to the East Coast. It sounds like you had a great day out with your daughter.

Glad you got some time out with your daughter. Love the color treatment you gave your banner image. Gorgeous!!
Happy T day!

What a great way to limit how many people can be on the beach. I'm glad you went early and enjoyed the morning. A Lobster roll sounds yummy afterward too ~ Enjoy your week!

We have no signs here but everything, I mean everything is full beyond capacity. The tourists are always rude and self serving, this year however, they are worse. Not following any rules for covid and fights at the bars, Oh yeah the bars are open here. It it so stupid. We don't go out. When we do it is at 6:30AM. Anyway it looks like the beach people were keeping a distance. Glad you were able to go and have a meal with your daughter. Enjoy your evening.

Some lovely views from your visit to the state park. And that lobster roll looks yummy. Sorry it was disappointing in taste and price. But at least you had a great day with your daughter.
Happy Tea Day,
Kate

A super post and it seems a good idea to have to pre-book a parking space at popular areas. It must have been a lovely day out with your daughter, even though you were unhappy with the lobster roll, it looked good to me, but the taste is everything.
Stay safe.
Yvonne xx

I'm glad your daughter and you got to have a fun, relaxing day at the beach. I think CT is limiting capacity at state parks to 50% also. Sorry to hear that cleverly named restaurant was a bit high on the prices and a bit low on the quantity of food. I happened to check the water temperature here yesterday, and it was 77, compared to your 67. But the air was 87, until the T-storms rolled through. Then it dropped to 81. Yay! We only got a little rain, but at least it broke the hot humid weather. I'm hoping that's it for this year, but later this week, it looks like it might creep up again. I see from the drought map that NH has the same problems as CT, with D0, D1, and D2 conditions. I hope we all return to normal rainfall soon. Happy Belated T-Day!

I commented yesterday but it seems to have gotten lost somewhere.
I said something about how lovely it was to spend a day with your daughter.
I smiled at your lobster roll. I have never seen one in real life but I recognised it immediately as a lobster roll. Of course you have been spoilt with the delicious lobster rolls at Pop's.
The beach looks nice, but yes, 33 degrees is quite hot. I can imagine you would have had enough by then.
Happy belated T-Day,
Hugs,
Lisca

It seems you had a good day out, but sorry your lobster roll wasn't all that good...