Hi everyone. This is the second day this week where I've posted twice.  I wanted to share my weekly food post at Kathy's Food Wednesday, especially now that for the summer Food Wednesdays is only going to happen on the first Wednesdays of the month.

First let me repost a photo I showed you in the last couple of weeks.

This past Friday night my husband came home from work early and took me out to dinner. He said he wanted to do something summery as it was a beautiful day and evening.  Plus he said I hadn't had my first lobster roll of the season yet. (On my first trip to Pop's this year the lobster rolls were already sold old.) I live relatively close to the seacoast (anywhere from a half to an hour away depending where I am exactly going), and the local lobster industry is strong there. That means lobster rolls are on the menus at many restaurants. I think one of the best ones around is at Pop's Clam Shack, which is a seasonal take out restaurant not too far from my house. 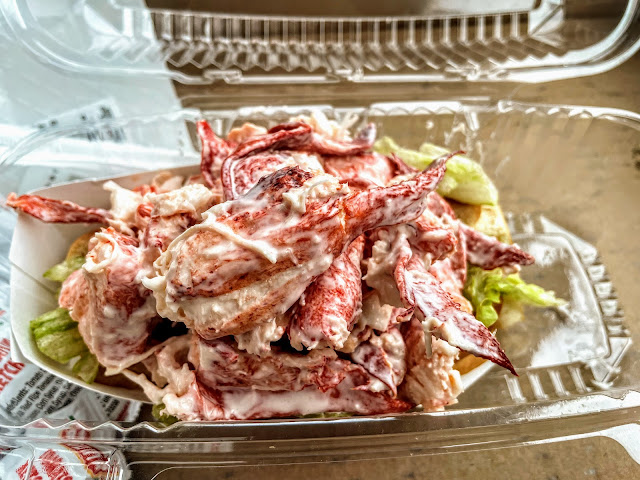 I know, the roll is hard to see. Traditionally, New England lobster rolls are served on buttered grilled hot dog rolls (which is New England are traditionally cut along the top not the side). Pops uses mayo to hold the lobster in the  roll together, but in some places butter replaces the mayo. In some places the lobster in the roll is hot, but I prefer cold lobster, and that's what most places in New Hampshire do.

I had to get a fork to eat some of the lobster, and then I ate the rest of my sandwich in the roll. Lots of restaurants don't fill the rolls as full as Pop's does. I am surprised that this year the cost  at Pop's has only gone up $1 from last year, seeing diesel fuel which many lobster boats run on is over $6 a gallon here in the state. I was talking with my SIL's husband (who works in the food industry in Maine), and he told me that some places in Maine are charging $40 for a lobster roll. OUCH! Right now Pop's is charging $22, which isn't inexpensive by any means, but still in the budget for a couple of summertime splurges before Pop's closes over Labor Day (the first Monday in September).

I may not be able to have many of these this summer, especially if the price goes up any higher, but I will say I did enjoy this one. At Pop's the roll comes with fries, but for $1 more you can upgrade to onion rings which is what I did.

If you skip the mayo or butter, lobster is pretty healthy to eat, as long as you don't over due your cholesterol for that day because one serving of lobster is about 70% of your daily cholesterol.  But lobster does have a nice amount of omega 3 which helps counteract your blood cholesterol level.  And the grilled hot dog roll doesn't count in these nutritional values either.

OK, enough chatter from me. Happy June to everyone.

I am allergic to mayo, so I probably couldn't eat at Pop's. Butter would be good, though. Nice you got to go.

This looks so good!

I am just drooling terribly over the lobster, Erika.

And once again I am so sad I´m not into seafood (oh, Dad´s genes!!! My Mom and Bro LOVE it!).
So healthy - glad you had your fav again! To happy foods, hugs

Glad you enjoyed it. I am not a seafood fan, so this woud not be for me, but so glad you have your lobster treat, I know how you look forward to it! Hugs, Valerie

Good morning Erika, Thank you for describing the lobster roll-wow that is big, I love mayo so would use the mayo choice. with all that lobster the price doesn't sound too bad especially including fries.
Thant must be nice to be able to hear the ocean, I lived on the ocean for a couple of years on Wrightsville Beach NC back in the early '70s loved it.
Thanks so much for joining us for Food Wednesdays Hugs Kathy

I would so much like to taste your lobster roll, Erika. As you know, I have never had it. It looks really delicious and I am so glad your hubby treated you to your favorite food.
Happy June to you too.

Yay you got the lobster roll!!! I'm jealous! ☺☺ I'm a big fan of seafood. I live in the Maritimes and there are lots of seafood places around here. I'll be in town this week, and may look for a lobster roll if I can find one! ☺

Must be great Erika to live so near the coast.. AND to have lobster on the menu.. YUM.. I've never had a lobster roll but it does look yummy.. At that price i will probably never have one.. lol But if i did i think i'd like it warm.. Happy Food Wednesday! Hugs! deb

I haven't had lobster in decades. Just not a food that is accessible even though I do live on the coast. It sure looks good though. I am surprised the prices was only $22.00. Glad you enjoyed the meal.

We also like seafood and next to chicken it's what we order most times. Grenville is NOT a lobster fan, which always surprises me as he is more a beach fan than myself. We usually have enjoyed at least 1 lobster roll per season in past years, but not sure about this season. Like yourself, I would have swapped fries for onion rings if given a choice and glad you could, Erika!

If I ever get to NH in the summer, you and I are going to Pop's. That's pricey -- but boy, it looks fabulous and worth every penny!

If lobster rolls got to be $40 apiece I would not be eating lobster rolls, even a good one. And since I steadfastly refuse to use disposable food items I only eat a lobster roll on vacation if I can do so without adding to the universal scourge of trash. That's exactly why we didn't have one during our recent visit to PEI. As for the use of mayo, a good lobster roll in my opinion uses it sparingly. Sometimes you'd swear that mayo was the main ingredient! Hugs - David

This looks so good and certainly a good sized portion. It wouldn't do to have it too often as it would not be a treat then! Hugs, Chrisx

Oops, just saw this post -- wowzers, that's some lobster roll! I'm sure it was scrumptious. I would like hot dog buns split on top for many things, why don't they do that? I've only had lobster hot with butter on side. As long as someone else pulls it out of its crusty exterior, I'm a fan! Happy you got to enjoy one of your favorite treats, xoxo