Hi everyone. I have few more photos from the Wright Museum  to share with you today.
Back in September my husband I visited visited the Wright Museum of WWII, which is more of a museum of American life in those years, but also did have some military exhibits too. Today I will show you some military views.
I enjoyed the local connections this museum made to places in the general area where I live.
Like the Portsmouth Naval Shipyard. I didn't know they used to build submarines since in my time their mission is to refurbish nuclear subs. 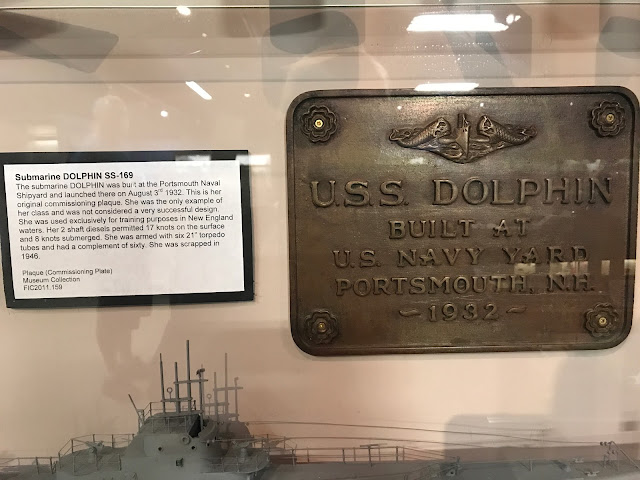 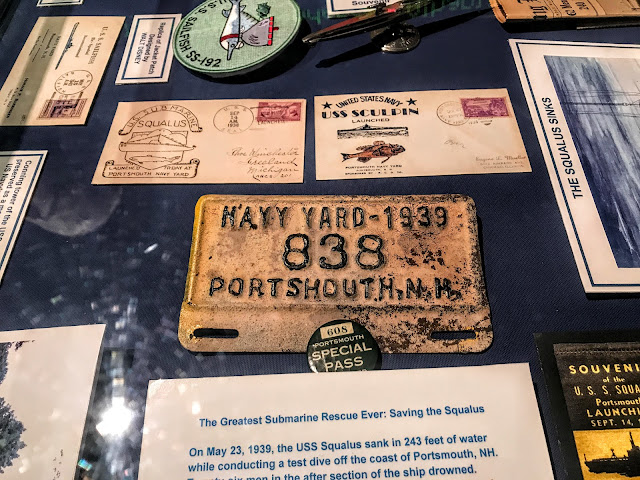 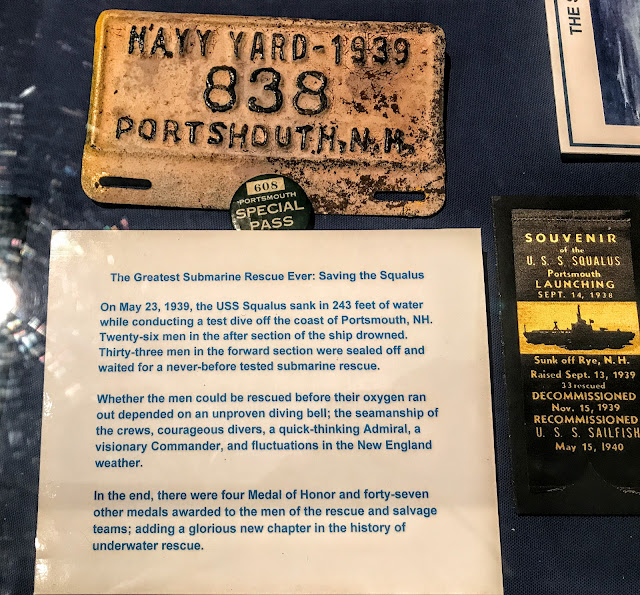 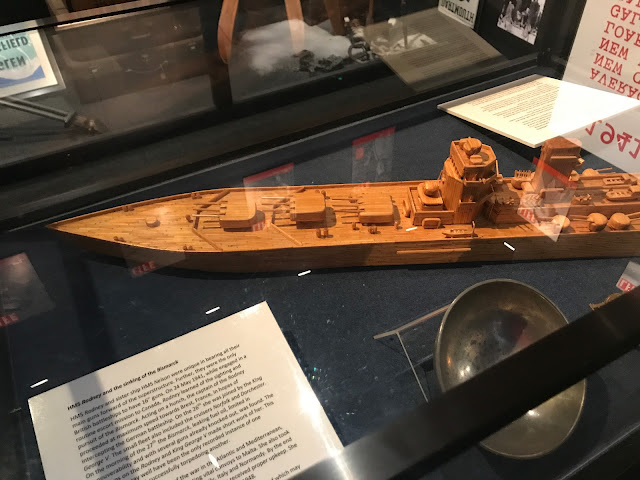 And Fort Devens, Massachusetts is now known simply as Devens. This is the base where my dad went out from in 1942. 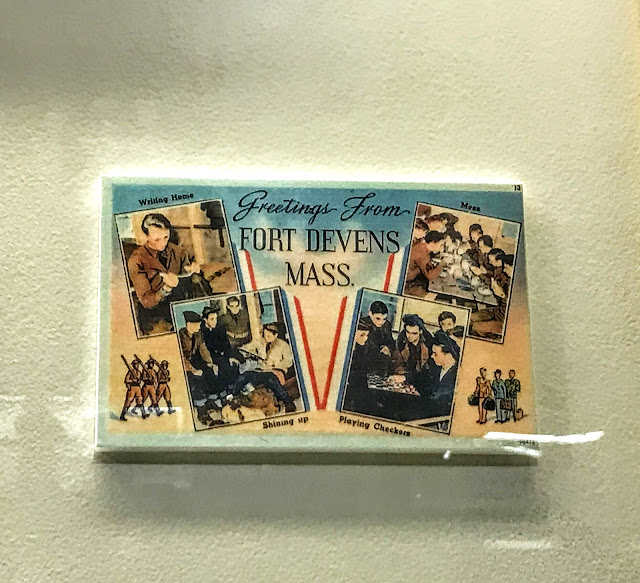 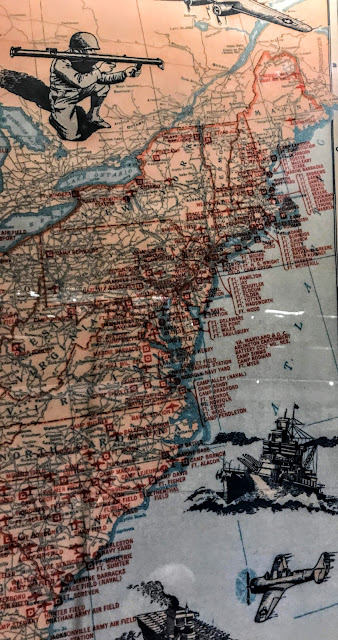 This map listed all the forts/fortifications. There were so many in seacoast New Hampshire, some still there and some I don't know anything about. 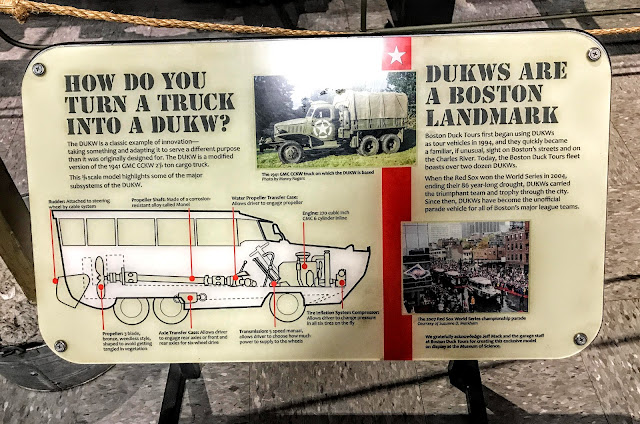 And the Boston Duck boats are always a fun ride. 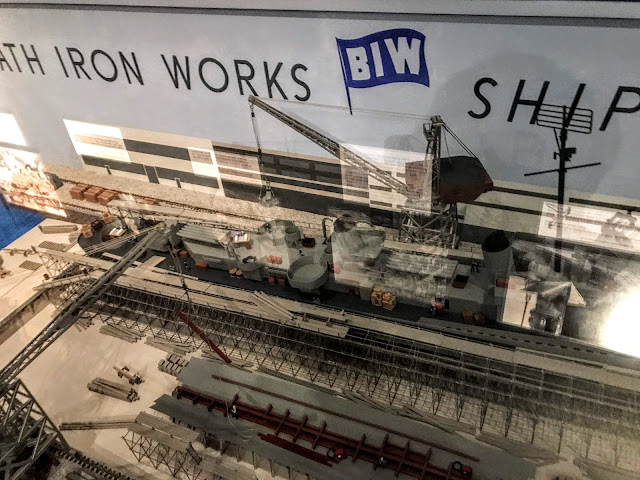 And there was also this model from a shipyard over o the Maine Coast. This is showing Bath Iron Works in Bath, Maine.
And here is some prisoner of war materials from a man who lived in the town south of my home. 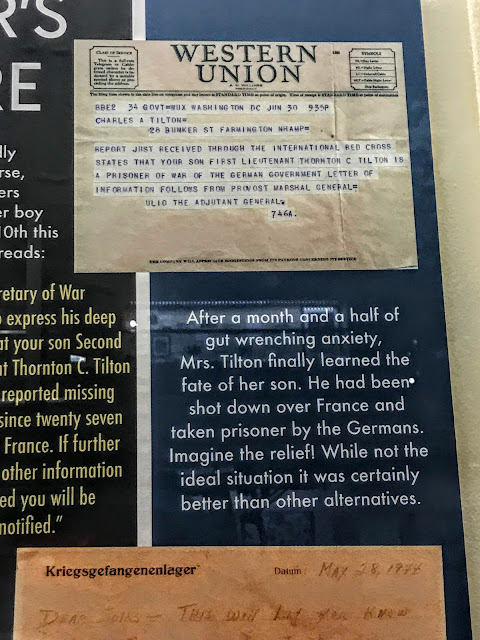 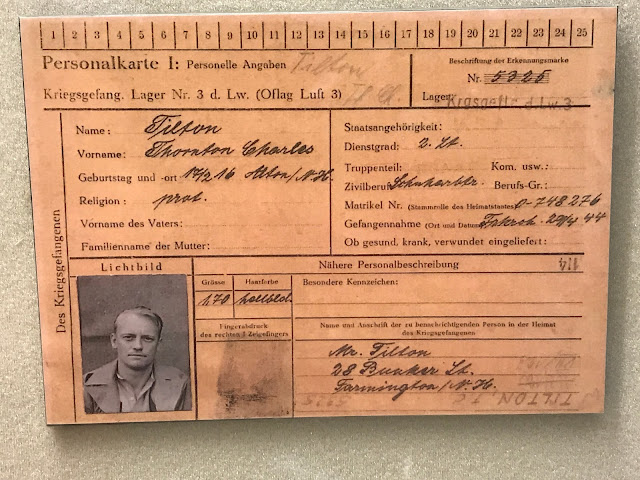 And a few uniforms for you. 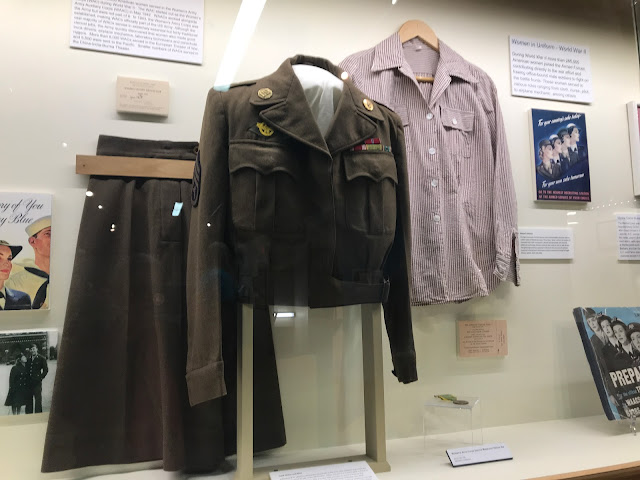 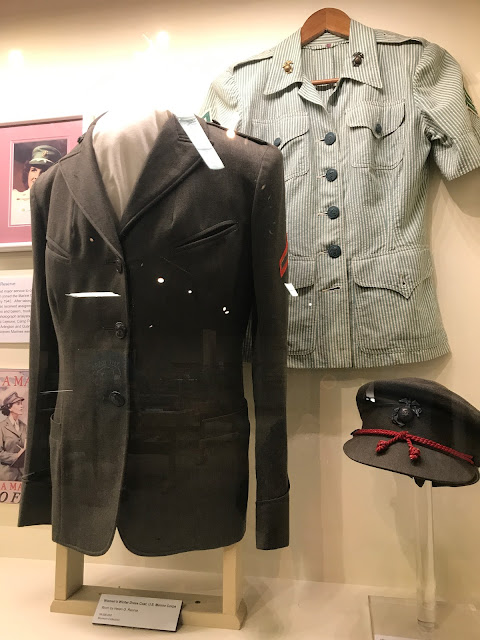 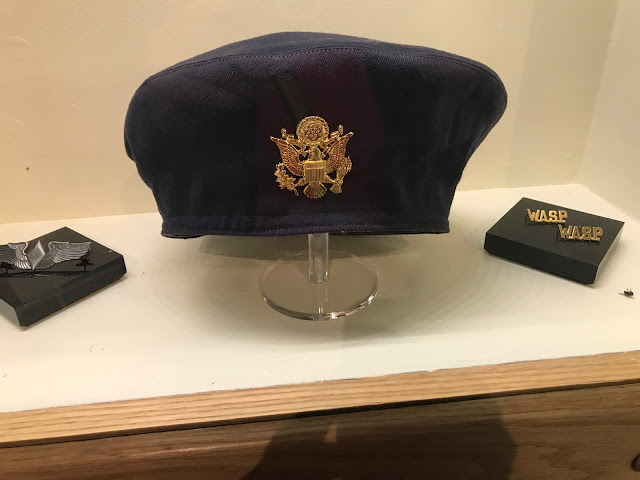 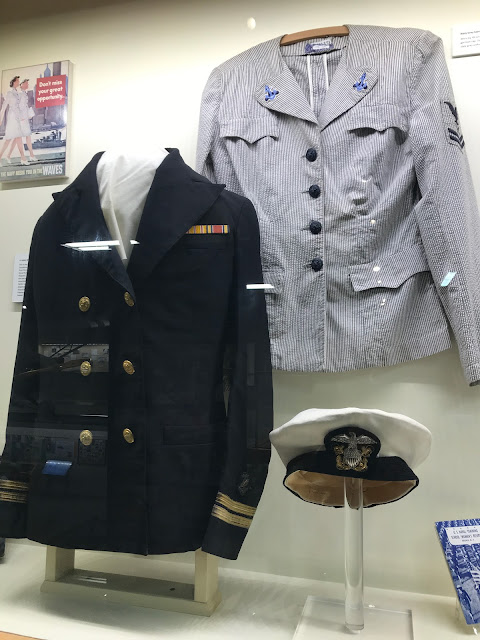 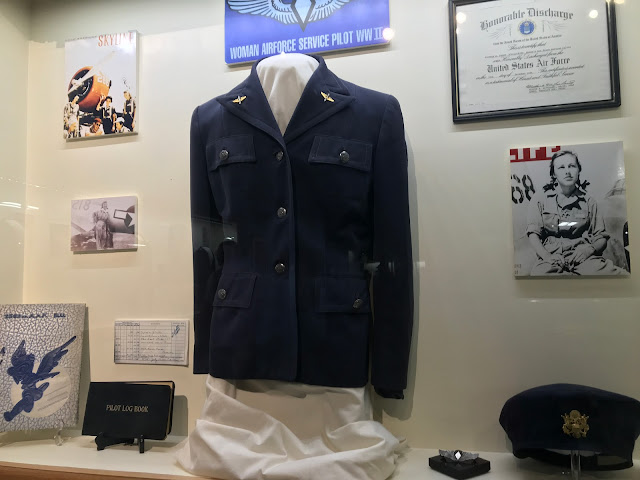 Did you expect them all to be about women in military?
(I was bad and didn't take any of the men's uniforms. ) 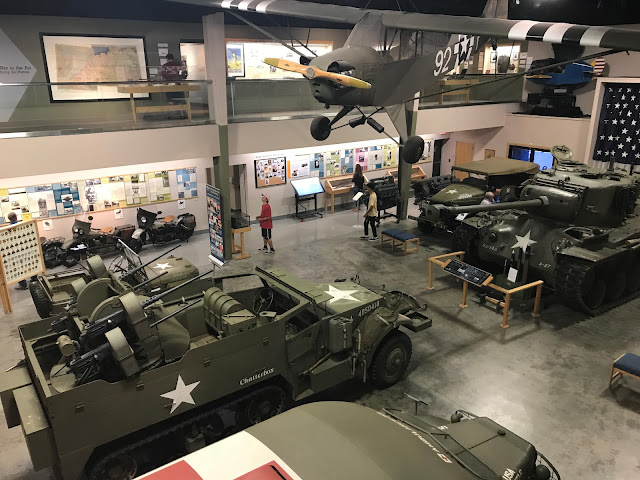 There were a few military vehicles also.
And one of the most fascinating military parts (to me) was an art exhibit they had. Here is one example, as I somehow didn't get any other photos.  The artist , Thomas Sanders, took modern photos of these veterans  holding some object that told a bit of their war story. I love stories, and these are more poignant as this generation is soon to be history themselves. 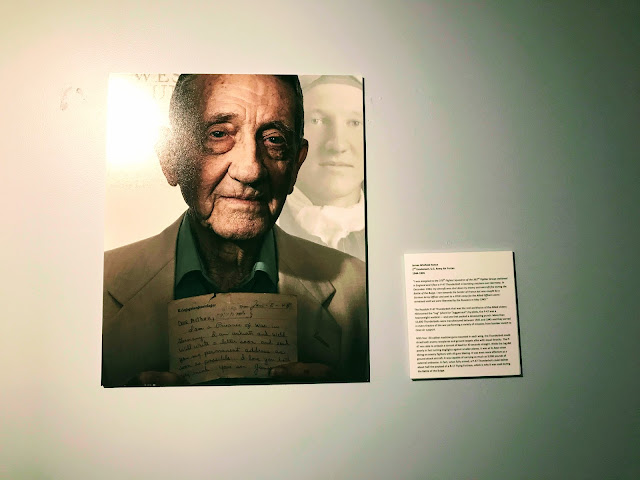 The exhibit was called the Last Good War.
I know the local stories may not be of interest to you , but I hope you enjoyed today's photo visit.
Thanks for stopping by.

I didn't know Portsmouth built submarines. I thought that was always done in New London, CT. The story of the Squalus would make a great movie. I wonder why it hasn't been done. My dad also went out of Devens in 1942. Dad entered the service in March. Wouldn't it be a qwinky dink if our dads were at Devens at the same time? Interesting story about Tilton being a POW. I liked reading his personnel card. I've seen photos of older people with a "reflection" of their younger selves online. I wonder if they were by the same photographer? Today, would be a perfect day for a trip to the museum. Stay warm and dry.

Very interesting photos and a great story about the rescue of those poor sailors in the submarine, that was a wonder. Hugs, Valerie

The modern photos of the veterans is a touching part of this exhibit. It's good to hear about their experiences from the ones who actually had the experience.

I did enjoy seeing more of the photos from the museum. It was good to see the women's uniform photos and they did war work in so many ways and deserve to be recognized for it.
Yvonne xx

It does look an interesting museum, many thanks for taking us on this visit through your words and great selection of photographs.

What an amazing step back in history, the portraits of the veterans holding something dear to them is amazing! Thank you for visiting me today,,

I loved you taking us to this museum again. Ironic that we both visited museums that dealt with war. Both were so much more, though. I'm really glad you shared the female uniforms because most of mine will be about male uniforms. It's also about so much more than war. I loved the photo of the older man and his younger self. I'm glad you shared the one because I had never heard of this before.

Wonderful rescue. It's great that so many were rescued, but sad some had to die. Thanks for sharing these photos with us.

Probably I .... hm, difficult subject being half German.
Interesting exhibit. 1999, aka before 9/11 we were on the USS Constellation.
Also intersting, but I´ll never understand war...

As I've said before, I love museums like this and it doesn't matter if the stories are your local or mine, they are all part of our heritage. Thanks for sharing this -- if I ever make it your way, let's go!

Hi Erika Thankyou for sharing your pics with us ,oh those poor sailors xx

We really enjoyed our visit to the Wright WWII museum as well, Erika. we never expected to find such a treasure in Wolfboro, NH, a small New England town. We're glad we were able to get there before it closes for the season in Oct. One of the things mentioned was a prisoner of war camp in Stark, NH, and our local library will feature a very timely presentation on it this month.

An amazing trip to this museum, thank you for taking us with you! ♥♥♥