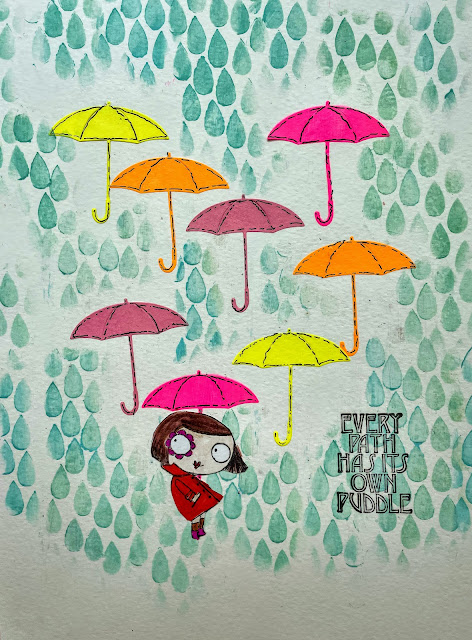 Hi everyone. Happy Sunday.
.
Today I want to share another page for Chris' All Kinds of Weather challenge at Art Journal Journey. I am also linking up to day 28 of AEDM.
I started my page by die cutting several umbrellas in different colors of origami paper. I laid them on my page and then stenciled the raindrops around them. I then lifted the umbrellas up to let the page dry.  Using the last couple of drops of paint on a paper towel, I rubbed the background so it wouldn't be so white. Once everything was dry, I attached the umbrellas and also outlined them with a black pen.
The girl is an AALL & Create Janet Klein stamp. She was stamped on white paper, colored and then fussy cut. I finished my page by stamping this ancient quote rubber stamp that I think is from the pre-Ranger days of Stamper's Anonymous ( before they starting making Tim Holtz and other stamps), but I am not positive.
We had some rain the Friday that turned to snow. The first snow this season. We only had about a 1/2 inch (1 cm), but it still made the ground white.  Winter is here though. 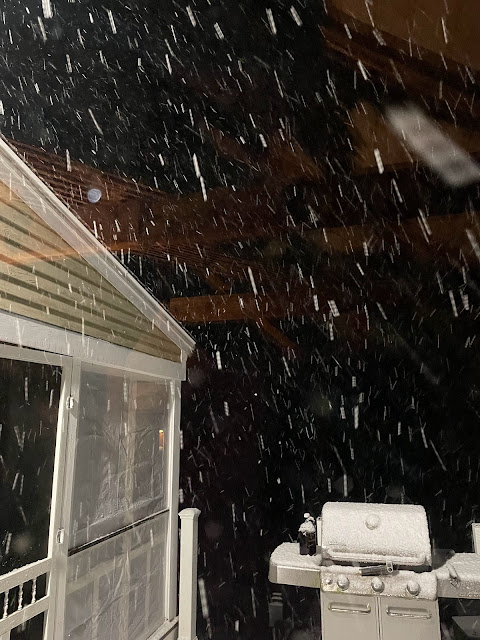 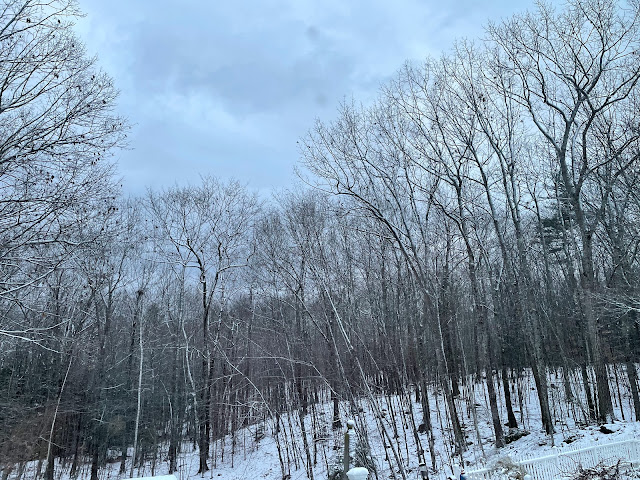 It looks cold and was cold. And there you have  the latest New Hampshire weather.
Let me share a few more photos from our trip to the Channel Islands National Park. (Back when it was a more balmy sixty degrees F or 15.5 degrees C. Smile )
I want you to meet my new friend, Mr. Raven. He landed on the dock railing near where we were sitting as we waited for  the boat. He and I had a little conversation. I had to apologize to him as I had nothing to feed him, but he didn't believe me. He did like how I told him how handsome he was.
And he did love to be the center of attention and have his photo taken too. 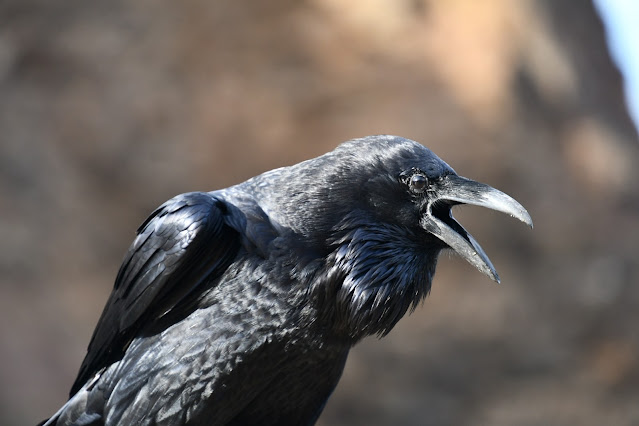 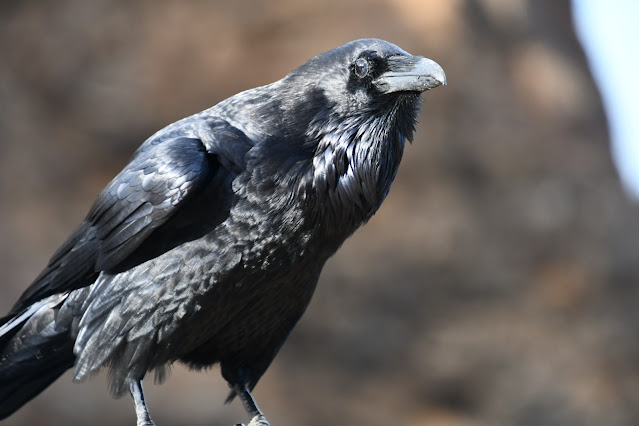 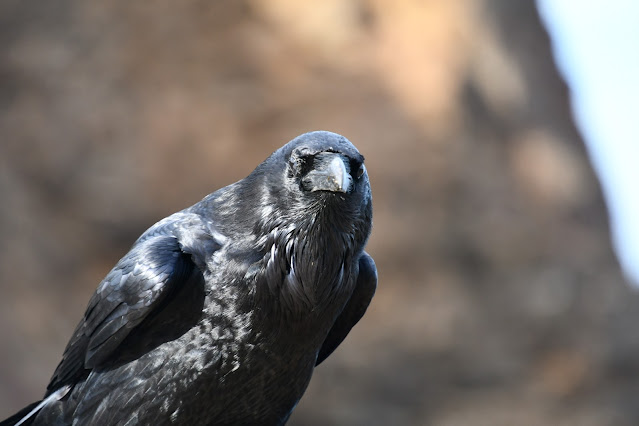 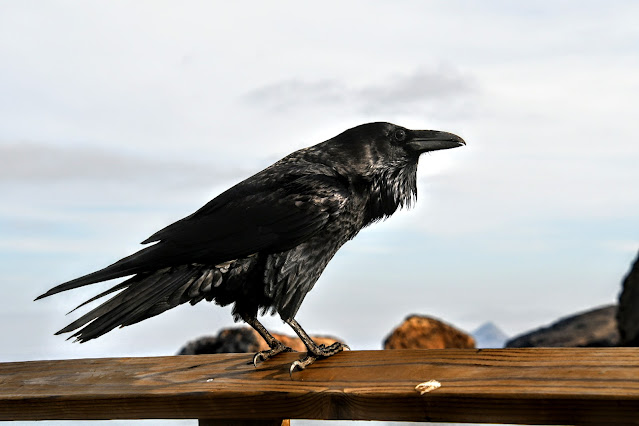 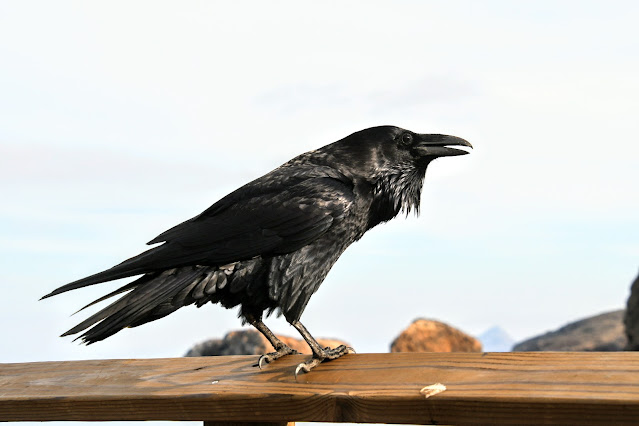 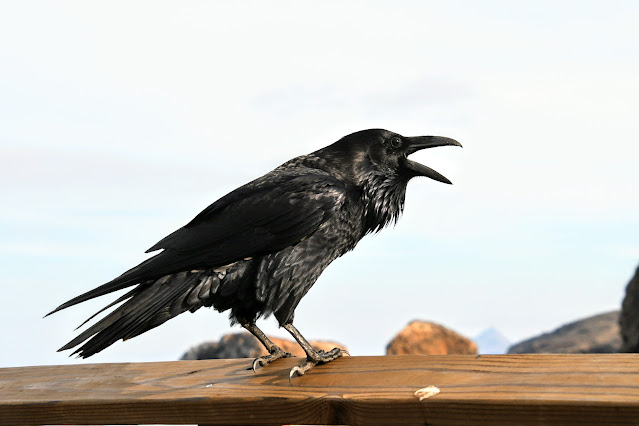 While he and I were chatting, I noticed he had a little side conversation going on with his friend who was flying. I suppose if I fed him then his buddy would have joined us also. What a  guy!
I know ravens and crows aren't the most exciting birds to see, but I rather like them. They are smart and clever, and are certainly not timid.
Have a great end to your weekend!
Posted by My name is Erika. at 5:34 AM

Would love to have some snow right now :-) It looks so grey and dark though.

I love your work, and I love puddles and rain!
So cute!

And I love, love, love ravens! What a handsome guy!

Good morning, I love your rainy page so sweet and I really enjoyed the crow photos. no snow here yet Happy Sunday

Super cute page Erika, and I love Mr Raven. I chat to the birds too :D
It was a chilly 1 deg C for our walk this morning, but no snow here. I think our son may have had some up North though.
Happy Sunday,
Alison

I love these birds, and I'm sure theY listen when you talk to them. Your rainy page is beautiful, too. Have a wonderful Sunday! Hugs, Valerie

LOVE those umbrellas, Erika. They are so well done and the neon colors of that origami paper really shows up nicely. This is a really lovely addition to Chris's theme at Art Journal Journey. That little girl is so cute and I think a favorite of Chris's, too.

Yesterday I learned the difference between crows and ravens, and from what I have now read, that is definitely a raven. Good job, dear. And I am sorry you got snow. It looks brutally cold there. Tomorrow it is supposed to be 70 F here. I put my shorts away too soon!

Great "All weather" piece. Very appealing! Brings back memories of when my daughter was just a little girl and we used to walk together in the rain. The pièce de résistance, however, are the stunning shots of the raven. Black birds are always difficult to photograph and to achieve the level of clarity you have is remarkable. Corvids are wonderfully interesting, intelligent birds, and I could never tire of them. Have you perchance read "Ravens in Winter" or "Mind of the Raven", both by Berndt Heinrich. Fabulous works! We too have snow. It's winter after all!

Oh isn't he a handsome fellow! Your page is so cute, love that little girl and all the umbrellas! We got snow overnight too, it was such a surprise/shock/horror to see it this morning lol but it was only a light dusting and it's gone now. Happy AEDM! Elle/EOTC xx

Love your rainy painting and the fabulous photo of the raven.
Hugs Wendy

Your new friend is very handsome and photogenic! We got snow too, enough to cover, though it won't last!

Love those raven photos! The repeating patterns in your rain art is great.

Love your rainy day art. Snow, I don't miss it at all. Lovely photos. Have a great day.

Oh the beautiful snow! Makes me happy to see it.

Your rainy day art would fit right in here in Ireland--plenty of rain going on!

Those are fabulous raven photos!

your girl has many umbrellas to choose from. :)

A lovely rainy page, and what fabulous raven photographs.

That girl's expression :) What a fun rainy day page.

Snow already! I can't imagine. We've had a bit of snow here as early as October, but that's rare, and some years we don't get snow at all.

I've never seen a raven, but I do admire our local crows :)

I love Janet Klein's girls and the colourful umbrellas look great flying up above her. Such a great page for my AJJ theme. We had snow too but it only stayed for a day. I love the Raven - they are such intelligent birds. Hugs, Chrisx

A fabulous page Erika, those bright coloured umbrellas will cheer up many wet days.
Yvonne xx