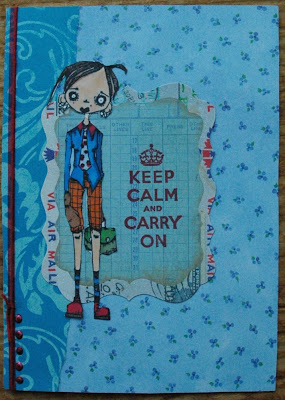 Once again I have a day off and I'm not feeling 100%...hopefully just a tummy bug (but I must say had me a bit worried/still worried)...last night I almost passed out at book club...stomach knots up and I was clammy...but then it passed and I was wiped out...this is the third time this has happened in the past 1 1/2 years. So called the doctor this morning and am going to see them next week...but URG. was so looking forward to a day off and FEELING good. But, at least I don't feel so bad I need to stay in bed... that's a plus.
So today's card is fairly simple too...but love this girl from Stampotique...looks to me like she's wearing a boxing glove so hence I picked up the saying to stamp...the Keep Calm stamp I used is from Rubber Soul. (Plus it works for me today being the worry wart hypochondriac that I can be.) The tag is a pre-made one from EK Success and I like the contrast of the girly paper...think a little bit of lace or would that be too much.
Anyhow, just a quick post today...the "boys" are so thrilled to have their mom home with them...Harley wants to be taken for his walk and Leo just wants to be frisky in the vicinity of me....he's a cat who LOVES company. Those are my boys,yes sir.
Posted by My name is Erika. at 8:51 AM